The hugely talented Jim Carrey gets the power of God from Morgan Freeman. But unless you like boob jokes and Nancy Reagan lectures, this preachy comedy's a snooze. 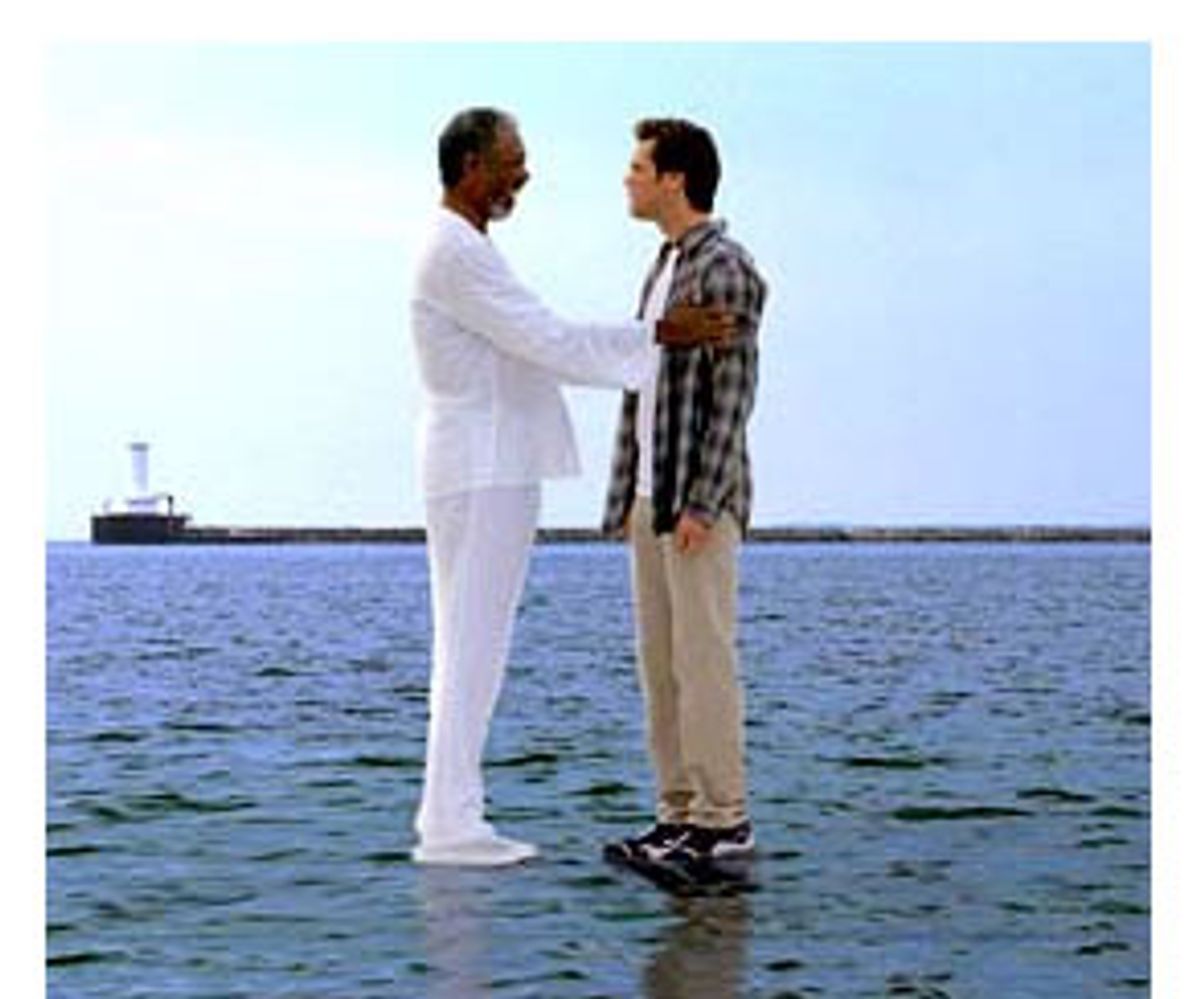 Jim Carrey's stuck in a rut, and he's not happy about it. Early in his indifferent new comedy "Bruce Almighty," Carrey starts complaining that no one takes him seriously. "I have to act like a total goof," he whines to Jennifer Aniston. "I have no credibility."

As Grace, the down-to-earth girlfriend of Bruce Nolan, the struggling TV news reporter played by Carrey -- who has just finished a segment on Buffalo's biggest chocolate-chip cookie -- Aniston just shakes her head sensibly. "There's nothing wrong with making people laugh," she insists.

Just about the only thing that's interesting about "Bruce Almighty," which might be Carrey's weakest film since he became a major star, is the extent to which it seems to be a movie about his own mid-career crisis. I mean, here we have a flick in which Carrey temporarily assumes the powers of almighty God himself (played by Morgan Freeman, and I can imagine no one better suited for the role) and hardly anything Jim does with his newfound omnipotence will actually crack you up. (Unless you're a big fan of watching dogs pee in the toilet or watching Aniston inspect her own breasts, which are admittedly very nice.)

If only Carrey himself would listen to Aniston's advice. Ever since the big-budget flameout of "The Cable Guy" seven years ago -- and, yes, I am among those who consider that film a dark masterpiece, an apex of sorts for both Carrey and director Ben Stiller -- his career has seemed angst ridden, betwixt and between, an enigma wrapped in the Grinch inside the Riddler. His attempts to reinvent himself as an Oscar-worthy leading man, in the ponderous "Truman Show," the interesting but flawed "Man on the Moon" and the dismal treacle of "The Majestic," started to seem so stilted and desperate that Carrey couldn't help mocking his own ambition at the 2000 Academy Awards ceremony. It was a funnier moment than anything in any of those films.

In "Me, Myself & Irene" the Farrelly brothers -- whose demented genius has perhaps provided the finest channel for Carrey's uncontainable talent -- managed to drag the star back to the semi-improvised, anarchic lunacy that made his early comedies, even when they were as dimwitted as "Ace Ventura: Pet Detective," so impossible to resist. But for better or worse (and mostly for worse) Carrey is now an Actor, determined to play roles and make movies that have Something to Say and, even worse, Send a Positive Message.

Maybe he'll work this out; I keep looking down the road and holding out hope for his future projects. His next film will be "Eternal Sunshine of the Spotless Mind," from a screenplay by Charlie Kaufman -- surely the union of those two weirdos will produce something memorable. After that he's scheduled to play Count Olaf in "Lemony Snicket's A Series of Unfortunate Events," if that ever gets made, and then the title role in Steven Spielberg's remake of "The Secret Life of Walter Mitty." (Actually, that sounds dreadful, but late-career Spielberg has gotten less predictable.)

In the meantime, though, we get "Bruce Almighty," which has a decent comic premise and reunites Carrey with Tom Shadyac, who directed him in the first "Ace Ventura" flick and the modestly amusing "Liar Liar." As in that film and in Shadyac's appalling "Patch Adams," the laughs in "Bruce Almighty" are thinly spread across a vast, bland cake of uplifting sentiment. Of course Carrey has his moments; even a script this weak can't negate his tremendous gift for physical comedy. His on-air persona as goofball newsman Bruce is tremendously appealing, and his meltdown when he learns he isn't going to get his station's coveted anchor job -- he's live from Niagara Falls, aboard the Maid of the Mist, wearing a dumb umbrella hat -- is a classic bit of Carrey shtick.

Away from the cameras, Bruce is a self-absorbed jerk, obsessed with his career failings, who doesn't notice that girlfriend Grace wants to settle down and make babies. (Aniston, although likable as always, is squandered on a nothing role here.) "I'm almost 40 and what do I have to show for it?" he fumes. "I'm not OK with a mediocre life!" Like a lot of other frustrated people, Bruce has taken to berating God, telling the G-man he could straighten out Bruce's life and career in five minutes if he gave a crap.

The joke here is that God, whose earthly manifestation is that of a saintly African-American janitor in an acid-washed Yankees cap, is actually listening and decides to take Bruce up on this. Since Bruce thinks he can do the job better, why doesn't he give it a try? It's a pretty intriguing idea, as far as it goes; some of the most beloved films of all time, from Frank Capra's "It's a Wonderful Life" to Michael Powell's "Stairway to Heaven" (aka "A Matter of Life and Death") to Stanley Donen's 1967 "Bedazzled," have mixed romance, comedy and theology in unpredictable ways. But beyond a few sight gags involving Bruce's parting of the Red Sea (a bowl of tomato soup), his imaginative revenge on a group of street thugs, and his mysterious invocation of Juan Valdez (of Folgers coffee fame), "Bruce Almighty" never goes anywhere.

Bruce learns lessons, of course. Randomly answering people's prayers leads to chaos. Having a meteor hit Buffalo (so he can get an exclusive and get his job back) probably isn't a good idea. And even God can kiss the wrong girl and generally act like an unlovable jerk. But "Bruce Almighty" has no spine and no bite. Given America's religious climate, Shadyac and his team of screenwriters undoubtedly didn't want to risk offending anybody, and the result is a movie that just wanders from one preachy, sentimental moment to the next. Everything it tries to say is trite beyond belief and it isn't all that funny.

On one of Bruce's encounters with God, the Deity lectures him on his uses of divine power (which have included giving himself a Ferrari and making the hapless Buffalo Sabres win the Stanley Cup). "Those aren't miracles," Freeman's Yahweh intones somberly. "A miracle is when a kid says no to drugs and yes to getting an education."

No, I'm sorry, a miracle is when a line that sounded like coughed-up spinach from Nancy Reagan's speechwriters in 1983 makes its way into a key scene of a major Hollywood movie two decades later, to be spoken by the Supreme Being, no less. Which one of "Bruce Almighty's" three screenwriters and eight producers would like to step forward and claim credit for that one? Jeez -- if God is this much of a sanctimonious jerk out of a Saturday-morning public service announcement, I think I prefer the Other Guy. What's more, in his heart of hearts Jim Carrey does, too.