This sleek remake has Michael Douglas and Albert Brooks as a CIA agent and a podiatrist about to become relatives, but it lacks the zany zing of the original. 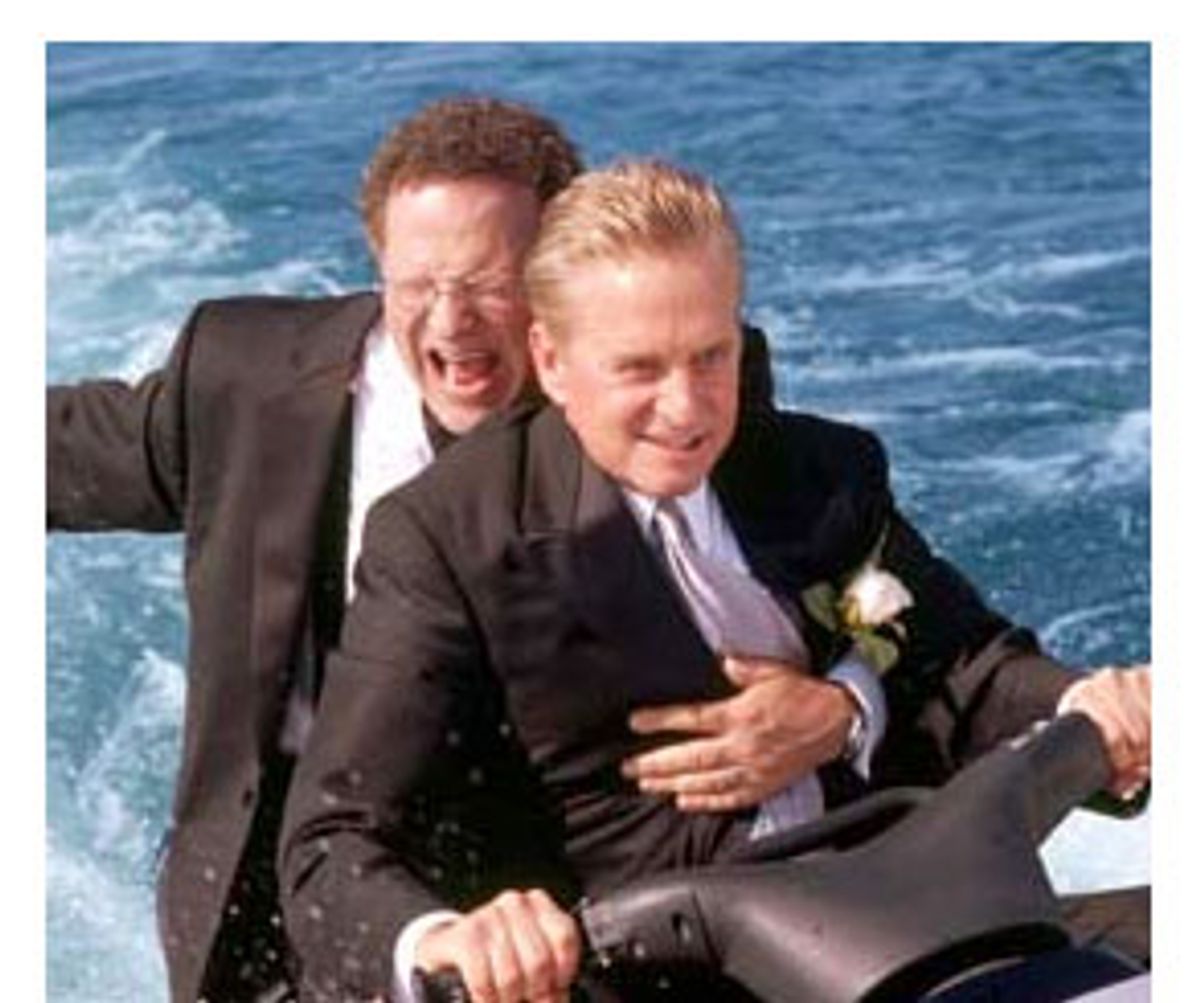 The two versions of "The In-Laws," the 1979 original directed by Arthur Hiller and starring Alan Arkin and Peter Falk, and the new version directed by Andrew Fleming and starring Michael Douglas and Albert Brooks, are X-ray versions of each other. The original was badly directed (being an Arthur Hiller movie, what else could it be?), drab and ugly to look at, and frequently hilarious. The new one is smoothly put together by Andrew Fleming (who also directed "The Craft" and one of the best recent American comedies, "Dick"), doesn't look as if it were shot in a toilet, and I don't think I laughed out loud once.

Hiller's movie is a good example of how wild-card actors can triumph over sluggish pacing and aesthetic indifference. As a rogue CIA agent and a mild-mannered dentist who are about to become related when their children marry, Peter Falk and Alan Arkin brought some of the unpredictability of improvisational comedy to what was essentially an extended sitcom. And Richard Libertini as a Latin American dictator who was more Senor Wences than Juan Peron sent the movie into cloudcuckooland.

The key to what made it so funny was Falk. His CIA agent was no James Bond but the type of guy who spends years toiling in a shabby office near Times Square. With his smudged reading glasses and his kvetching about the Mets' pitching, and the chef's hat and plaid apron he dons for backyard barbecues, he couldn't seem more like an average, unremarkable guy. Which only made the way he inhabited his own woolly universe seem all the more bats. Falk discussed his career as a CIA operative in the way that an insurance agent talks about actuary tables, and the way his character seemed to merge the bridge-and-tunnel set with the loony bin kept you off-center.

The filmmakers of the remake, Fleming and screenwriters Nat Mauldin and Ed Solomon (who reworked the script Andrew Bergman wrote for the original), obviously felt they had to reinvent the material. But casting Michael Douglas in the Falk part, and opening the movie with the character making a daring escape from Prague, only introduces the Bond image the original disdained. As his in-law to be (here, a podiatrist instead of a dentist), Albert Brooks trades on nebbishy shtick. The movie milks laughs out of Brooks wearing a fanny pack so he can carry around a collapsible drinking cup and a couple of Lorna Doones to snack on. But Brooks has none of Arkin's reasonableness, or the slightly abstracted quality that allowed him to stand back from situations as they became more and more absurd.

The Richard Libertini figure has become a big-time arms dealer, played by David Suchet who seems meant to be funnier than he is. Maybe the writers were looking for a way to parody the implied homosexuality of supervillains (tell me that Bond archenemy Blofeld never struck you as just a little bit nelly), but what they end up with is fairly standard swishing around (it's not offensive, just tired).

The brightest spot in the cast is, surprisingly, Robin Tunney as Douglas' assistant, an agent in training. She puts her flat, raspy voice to good sarcastic use and gives the movie a little snap in a few scenes.

This "In-Laws" isn't a disaster, it's just not very good. You can feel Fleming in there pitching, especially during the first 45 minutes, which move rather briskly. He's got a great sense of pop music, and various tunes appear on the soundtrack to liven things up a bit. But it doesn't feel as if his heart's in this one, as it did in "Dick" and "The Craft." Part of the problem may be that this is the first movie he's directed in which he didn't have a hand in the writing. And part of it may be that his sympathies seem to lie with adolescents, and (as in "Threesome") characters who are just post-adolescent.

Whatever the problem, he seems to be simply doing a job here. Fleming has been one of the brighter spots in American commercial movies in the last few years. He may not be the type of director who has wildness in him, but he responds to farce and to the horror genre, and apparently still believes there are nifty things to be done in them. That he's still in here trying to pull off something entertaining suggests an admirable lack of cynicism. The most encouraging thing about "The In-Laws" is that Andrew Fleming doesn't seem to have it in him to become a hack.