Coors beer ads have created a fantasy scenario with an incestuous twist that communicates brilliantly with the piglike male brain. 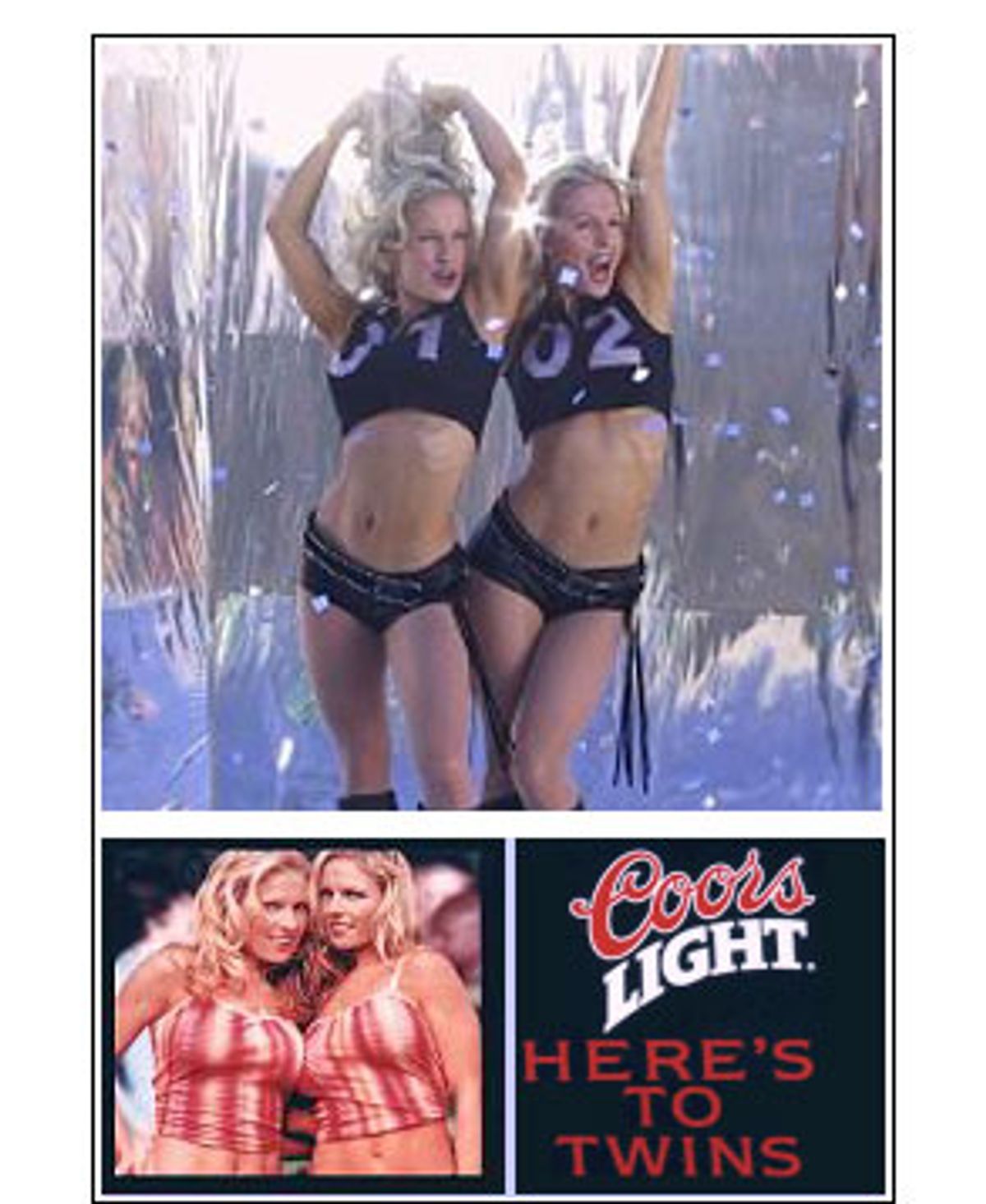 The sexual exploitation of women in beer ads supports the misperception that women exist for men's pleasure alone; as well, it creates a standard of beauty that is impossible for the average woman to achieve, often resulting in feelings of inadequacy and blah, blah, blah, blah. Does anyone even care anymore?

That said, there is something uniquely off-color about Coors' latest advertising campaign. The commercial spots, which first aired during the 2002-03 NFL season, are responsible for Coors' highest-ever ad ratings, predicted increases in product sales, and a newfound relevance with 21- to 25-year-old male consumers. Though the musical odes to stuff guys love -- "two-hand touch," "short skirts," "burritos at 4 a.m." -- played during the commercials are clever, credit for the campaign's success goes to Diane and Elaine Klimaszewski. Besides being just plain hot, the aesthetically gifted 26-year-old blondes featured in the campaign are twin sisters. Twin sisters whose four blue eyes seem always to be saying, "Hey boys, anyone up for a three-way?" Sisters in a three-way? Gross.

With the Barbie twins busy working toward an eating disorders-free world and the Olsen twins still just this side of nubile, Diane and Elaine have secured the No. 1 spot in the twins category. Their Coors fame has since led the model/actor/singer sisters to appearances in "Star Trek: Enterprise," a new Peter Gabriel video, J.Lo and Ben's upcoming film "Jersey Girl," and the November 2002 issue of Maxim; ventures in music (their self-titled debut pop album, "Klone," is available online), fashion (their lingerie line is called "Zipper Girl") and television (they are now developing the reality series "No Chicks Allowed").

Diane and Elaine are knockouts, no question, relatively not super skanky, and entrepreneurially spirited. But is their combined T&A factor that much greater than that of two equally hot but unrelated models? And, if so, why?

Coors is not breaking any ground with the "two girls is better than one" concept. That bandwagon has been teeming for years with advertisers (Guess Jeans, Jose Cuervo, Skyy Vodka and Abercrombie & Fitch, to name only a few), many of whom beat around the bush far less than Coors. For instance, in a currently airing alcoholic-beverage commercial, a duo of gorgeous women, pressed together in the cleavage-to-cleavage confines of a phone booth, manage to squeeze in Joe That-Could-Totally-Be-Me when they notice he comes bearing alcohol.

Foote, Cone & Belding, the agency responsible for the "Here's to Twins" ads, is not alone in knowing that every guy with blood in his veins has fantasized about being the roast beef in a hot woman sandwich. But they are alone in creating a ménage à trois fantasy scenario with an implicitly incestuous twist. Incest -- even between sisters, and even if only by association -- conjures images of drunk, portly uncles, birth defects, low I.Q.s, and missing teeth. This stuff usually doesn't make people thirsty for an ice-cold Coors. And it's stuff, you'd think, advertisers would want to stay away from.

Our instinct to avoid sexual relations with close relatives is less about producing messed-up offspring than people think. Prohibitions against such behavior, for blood and non-blood relations alike, were established prior to knowledge of genetics and continue despite effective and accessible birth control. A supplemental theory proposed by anthropologists and sociologists is that incestuous relationships lead to role conflicts within families, create ambiguous boundaries, and disturb normal psychological and social development. This is applicable to sexual relations in which procreation is not a possibility, for instance, sister-on-sister action.

The incest taboo has been a tough cookie to crack, but then, who's trying? Hooking up (voluntarily) with one's own parents, siblings, aunts, uncles, or cousins is not topping most people's sexual wish lists. Sure, it happens on occasion, and that bastard Freud insists we think about it, but moderately well-adjusted people seem to maintain their distaste for such behavior. So why has Coors risked millions of dollars on ads hinting at the one taboo that makes even the most sexually liberal among us squirm?

I looked to my male friends for insight into the matter. Their lack of it spoke volumes.

Greg, a 30-year-old business school student, went dumb when I asked him how he felt about the incestuous connotations in the "Here's to Twins" Coors ads. The look of incredulous annoyance on his face -- it read, "What the hell is your problem?" -- was one I would come to know well. I would also come to know that explaining I have no problem, but am simply wondering why it is that the implicit sexual relationship between twin sisters sits just fine with him, and in fact strikes him as fucking awesome, was not only futile but cruel. I had no idea that asking men to analyze the biological relationship between Diane and Elaine Klimaszewski would be like asking a 7-year-old to analyze the time frame for Santa's worldwide toy delivery schedule.

Greg wasn't going to let me ruin his fantasy. He delivered his sociological analysis of the phenomenon -- "I have no idea" -- with a heavy sigh before turning away. Bob, a 36-year-old reporter, only infuriated me further by saying what men always say when things get complicated: "You are thinking way too much about this." Such a cop-out. Only in this case he may have been right.

It was astonishing how many times I heard this from men who had read and/or heard the word "twins" while looking at the two physically identical women and still hadn't put 2 and 2 together. Even men who knew that Diane and Elaine are real twins were dumbfounded when I pointed out their blood relationship. They had never thought about it that way; they had never thought about it any way.

From my research I learned that men find real-life relationships are hard enough. All those post-coital responsibilities -- holding, talking, breakfast, phone calls, talking, commitments, talking, anniversaries and valentines, plus all that talking -- can really stress a guy out. So the less they have to act like decent human beings in their fantasies, the better. Even the most universal of male fantasies -- having two women at once -- turns nightmarish when interrupted by thoughts of emotional obligations. (Does this mean I have to call both of them the next day?) Their fantasies are about what could happen in a world free from the rules of wives and girlfriends (and, obviously, the rules of attraction) and from the reality that two identical women are biological twins. Even if they are really, really hot.

This is why Diane and Elaine are such a bargain. At least for fantasy purposes, men seem to perceive the pair as essentially one woman, with the bonus of two bodies. Two bodies servicing his body. Four boobs for the price of two.

Rest assured, most men still find incest gross. Oddly, some of the men I spoke with were offended by my mention of the issue in relation to Diane and Elaine. In their ironic innocence they had managed to enjoy the twins' physical sameness without processing the reality of their monozygotic relationship. As Scott, a 32-year-old magazine editor, so eloquently put it: "There are two of them and they are the same and I can have sex with them at the same time and did I mention that they're the same?" In other words, the twins are more than just two women -- they are two of one woman.

Despite their claims, I'm not convinced men are even into three-ways, or lesbians, for that matter. What they are into is two women working together in a joint effort to bring them pleasure. It is a scenario that deems the sexual relationship between the two women irrelevant; hence, the acceptability of the sister-sister-guy fantasy. The three-way scenario is that much more heavenly when the two women are indistinguishable from one another, their lack of identity being the ultimate in low-maintenance.

Scott had warned me from the beginning: "Men really are pigs, stupid pigs. You should be thankful that you don't understand this part of our psychology." Now that I know, I kind of wish I could go back to being thankful.

Shari Waxman is a writer in New York.