Allies: Where are the WMDs?!

The Dems and the U.S. public may meekly accept the administration's ever-changing answers about Saddam's alleged weapons. But our foreign allies don't -- and the more the White House spins, the angrier they get. 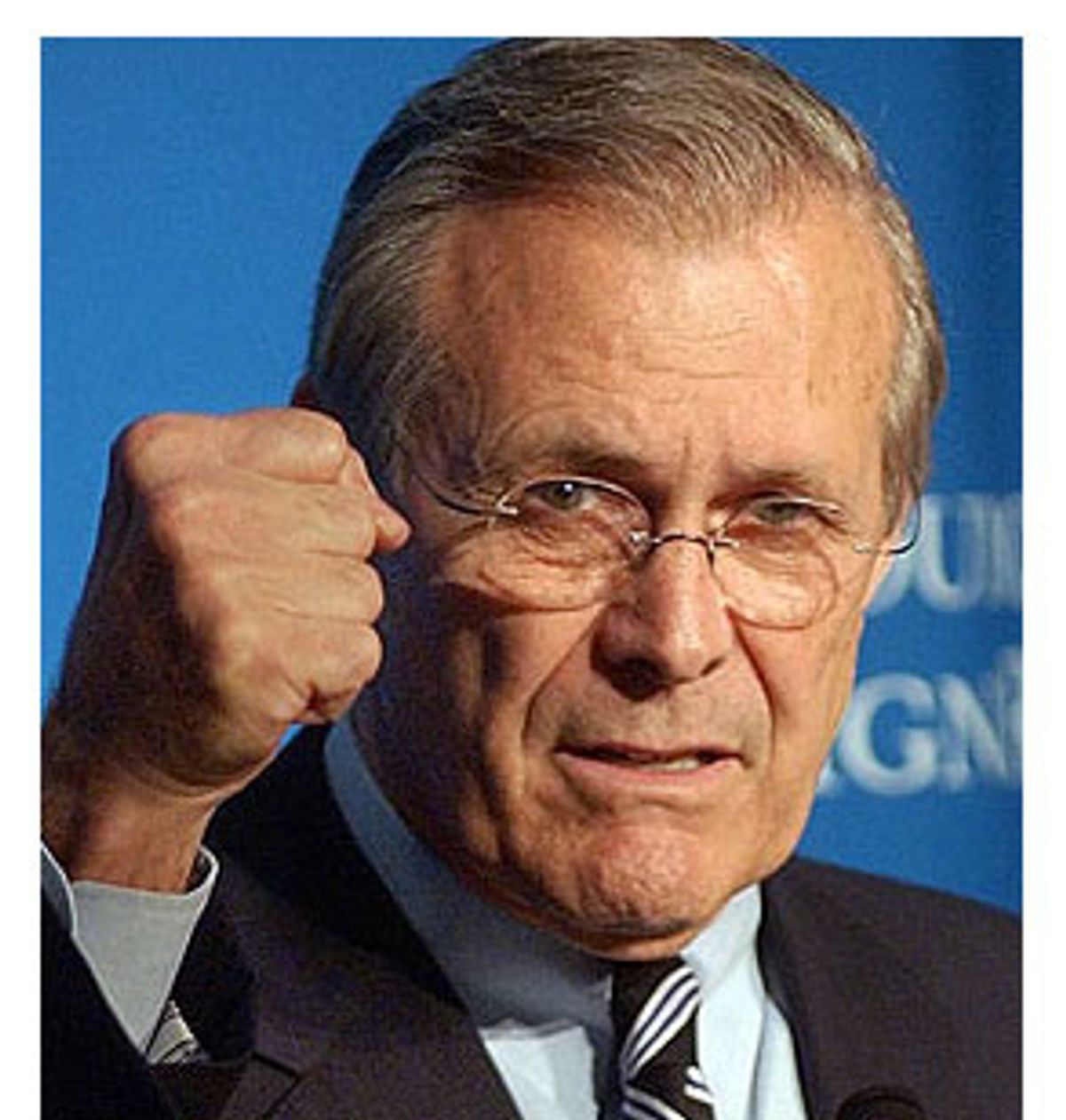 Democratic Party officials, with few exceptions, seem unconcerned with the fact that the U.S. government has not yet been able to locate any direct evidence of weapons of mass destruction in Iraq -- the declared reason for the war. But that fact is not going unnoticed by opposition parties in other countries whose leaders are allied with President Bush, especially in light of comments made Tuesday night by Defense Secretary Donald Rumsfeld allowing that WMD may never be found, which is an apparent contradiction to previous administration remarks on the subject.

Polls indicate that the American people care little that such discoveries have not been made. Bush administration officials thus continue to act as if none of this is an issue, while moving on to focus on other conflicts, like Iran and the Israel-Palestine peace process. But in nations allied with the U.S. -- from Australia to Denmark to Ireland to the U.K. -- opponents of the war are using Rumsfeld's remarks about the MIA WMD as evidence of duplicity by the Bush administration. It all creates a sort of parallel-universe feel, where other men in far-off lands suffer recriminations because of remarks made here.

On Tuesday night, British Prime Minister Tony Blair was flying to Kuwait to thank British troops for their war efforts when Rumsfeld was telling an audience at the Council on Foreign Relations that "it is also possible that [Iraqi leaders] decided that they would destroy [the WMD] prior to a conflict. We don't know what happened."

In the U.S. the comments seemed just part of a rolled-out talking points plan for Bush administration officials to back off their declared confidence that they would discover WMD, what White House spokesman Ari Fleischer referred to in April as "what this war was about." And there seemed little likelihood of recrimination from the American people, 41 percent of whom -- according to a recent poll by the Program on International Policy Attitudes -- believe or are unsure about whether the U.S. has already found WMD in Iraq. Moreover, according to a Fox News/Opinion dynamics poll from late May, 82 percent of the American people think that any WMD have been moved or destroyed, while only 10 percent think that there were no weapons to begin with. But abroad, Rumsfeld's remarks and those like them have been pounded upon by war opponents in countries that helped the U.S. fight the war.

Further doubts about pending WMD discoveries -- fueled by Bush officials themselves -- have bubbled to the surface at an awkward time, and not just because of Blair taking his Basra victory lap. On Wednesday, CBS News reported that Col. Tim Madere, an unconventional-weapons specialist with the Army's V Corp, disputed U.S. intelligence claims about the site U.S. intelligence called Saddam's bunker on the night of March 20, thus launching an early attack with 40 Tomahawk missiles. "We looked real hard," Madere said. "We didn't find any bodies or bunkers." On Thursday, the BBC reported that members of British intelligence had serious questions about a dossier from Blair's office claiming that Iraq could launch a WMD attack with only 45 minutes' notice.

Since the Iraq war began and no evidence was immediately found to back up Vice President Dick Cheney's Aug. 26 pronouncement that "simply stated, there is no doubt that Saddam Hussein now has weapons of mass destruction," the administration has been back-pedaling. In his April interview with NBC's Tom Brokaw, for instance, President Bush lowered the bar, indicating that the U.S. was looking for evidence not of the weapons themselves but that despot Saddam Hussein "had a weapons of mass destruction program." The same day as the Brokaw interview, at an Abrams Army Tank plant in Lima, Ohio, Bush noted that "whether he destroyed them, moved them or hid them, we're going to find out the truth."

This has sufficed for those like Senate Minority Leader Tom Daschle, D-S.D., of the alleged opposition party, who told NBC on May 11 that he doesn't think the failure to find WMD would be damaging to U.S. credibility. "I think we've got to recognize that there were more than one goal here," Daschle said, as if reading from White House talking points. "One of the other goals was to remove a threat to this country, to remove a threat to the region, to remove a person who not only repressed and tortured his own people but clearly posed some serious problems throughout the world."

But throughout the corridors of power among the leading "Coalition of the Willing" nations -- where opposition to the war was much stronger -- such back-pedaling has been received with less than open arms. Former Blair Cabinet Secretary Robin Cook, who resigned in opposition to the war, erupted upon hearing the defense secretary's remarks. "If Donald Rumsfeld is now admitting the weapons are not there, the truth is the weapons probably haven't been there for quite a long time," Cook said to the BBC's Radio 4. "We were told Saddam had weapons ready for use within 45 minutes. It's now 45 days since the war has finished and we have still not found anything."

But did it matter? After all, the Iraqi people had been liberated from Hussein's oppressive regime. "It matters immensely," Cook insisted, "because the basis on which the war was sold to the British House of Commons, to the British people, was that Saddam represented a serious threat. It is plain he did not have that capacity to threaten us -- possibly did not have the capacity to threaten even his neighbors -- and that is profoundly important."

On his way to Kuwait, Blair was asked for comment about the brouhaha. Seeming to disagree with Rumsfeld, Blair said, "I have no doubt we will find such weapons. I have said throughout, and I just repeat to you, I have absolutely no doubt at all about the existence of weapons of mass destruction."

Blair cited the "two trailers that both our and the American security services believe were used for the manufacture of chemical and biological weapons." This was a reference to what U.S. intelligence officials have claimed this week is the "strongest evidence to date that Iraq was hiding a biological warfare program," though no trace of any biological agents had been found in the trailers.

Rumsfeld wasn't the only one gumming things up for allied governments. Deputy Defense Secretary Paul Wolfowitz says in a pending interview with Vanity Fair that the emphasis on WMD was "for bureaucratic reasons; we settled on one issue -- weapons of mass destruction -- because it was the one reason everyone could agree on."

On Thursday, opposition Labor Party leader Simon Crean told Radio Australia that the Wolfowitz comments were "another example of the government being caught out by its own deceit."

Liberal Party leaders were thrust into an awkward situation. Defense Minister Robert Hill told Australian Radio that the Iraqi government "may have destroyed more [WMD] than we believed. It might be the case," he told Australian Radio. Foreign Minister Alexander Downer told his countrymen that they "can lie in bed at night with full confidence that Saddam Hussein's regime is not going to threaten anybody on earth with biological and chemical weapons, because his regime doesn't exist." He noted that Rumsfeld never said that the hunt for WMD was over. "He said they might be hard to find or might not be found," he said to Australian Radio. Citing the two trailers as evidence of Iraqi malice, Downer allowed that "whether the agents that were to be used in those biological warfare vehicles will be found, that's another question, because it's obviously like looking for a needle in a haystack." But Downer disagreed with Wolfowitz's comments to Vanity Fair about the "bureaucratic" reasons for stressing WMD.

Other Bush officials have come forward to offer other explanations. Last Friday at a luncheon hosted by the National Defense University Foundation, the undersecretary of state for arms control and international security affairs, John Bolton, said, "There has been a lot of misunderstanding as to exactly what it was we expected to find and when we expected to find it." The weapons weren't the issue, Bolton clarified. Rather, it was "the intellectual capacity in Iraq to recreate systems of weapons of mass destruction," or "the continued existence of what Saddam Hussein called the 'nuclear mujahadeen,' the thousand or so scientists, technicians, people who have in their own heads and in their files the intellectual property necessary at an appropriate time ... to recreate a nuclear weapons program."

Rumsfeld's remarks also set off some heated rhetoric in Denmark and Ireland. According to the Danmarks Radio Web site on Thursday, opposition forces like the Radical Liberals and the Unity List have issued demands that the government reassess the quality of the intelligence information given to the parliament about Iraq's WMD. In Ireland, according to Thursday's Irish Times, Socialist Party leader Joe Higgins, citing Rumsfeld's remarks, charged that the government's invitation to the U.S. military to use its airspace and an airport was based on a Bush administration "falsehood" that "misled" the Irish people and parliament. Rumsfeld was the "same person who reveled like a psychopath in his strategy of shock and awe as the entire infrastructure of a nation was blown to rubble by U.S. and British bombs," Higgins said.

Irish Prime Minister Bertie Ahern responded by saying that he was "proud of the actions we took in supporting the UN Security Council and anything else we did in this regard." He said that it was "amazing how some people are so glad to argue the case for a dictator who was responsible for using torture and killing thousands of his own people." But other Irish politicians took the moment to slam Rumsfeld, one calling him a "war criminal," another saying that "if there were no weapons of mass destruction then the war was fought on a lie."

Though the Bush administration has resisted working with international arms inspectors, it quietly gave in on this matter -- perhaps at least in part due to these myriad criticisms. On June 6, representatives of the International Atomic Energy Agency will return to Iraq where under tight American supervision they will be permitted to inspect one area, Tuwaitha, for nuclear weapons or their remnants. After all, as Ahmed Chalabi, leader of the U.S.-backed Iraqi National Congress, told CNN's World Report Conference on Thursday, "It is not surprising they have not been found, because the effort to find them has not been that great."