Two new books on genetics explore how the Y-chromosome divides males from females -- and ask whether male humans are headed for the biological dustbin. 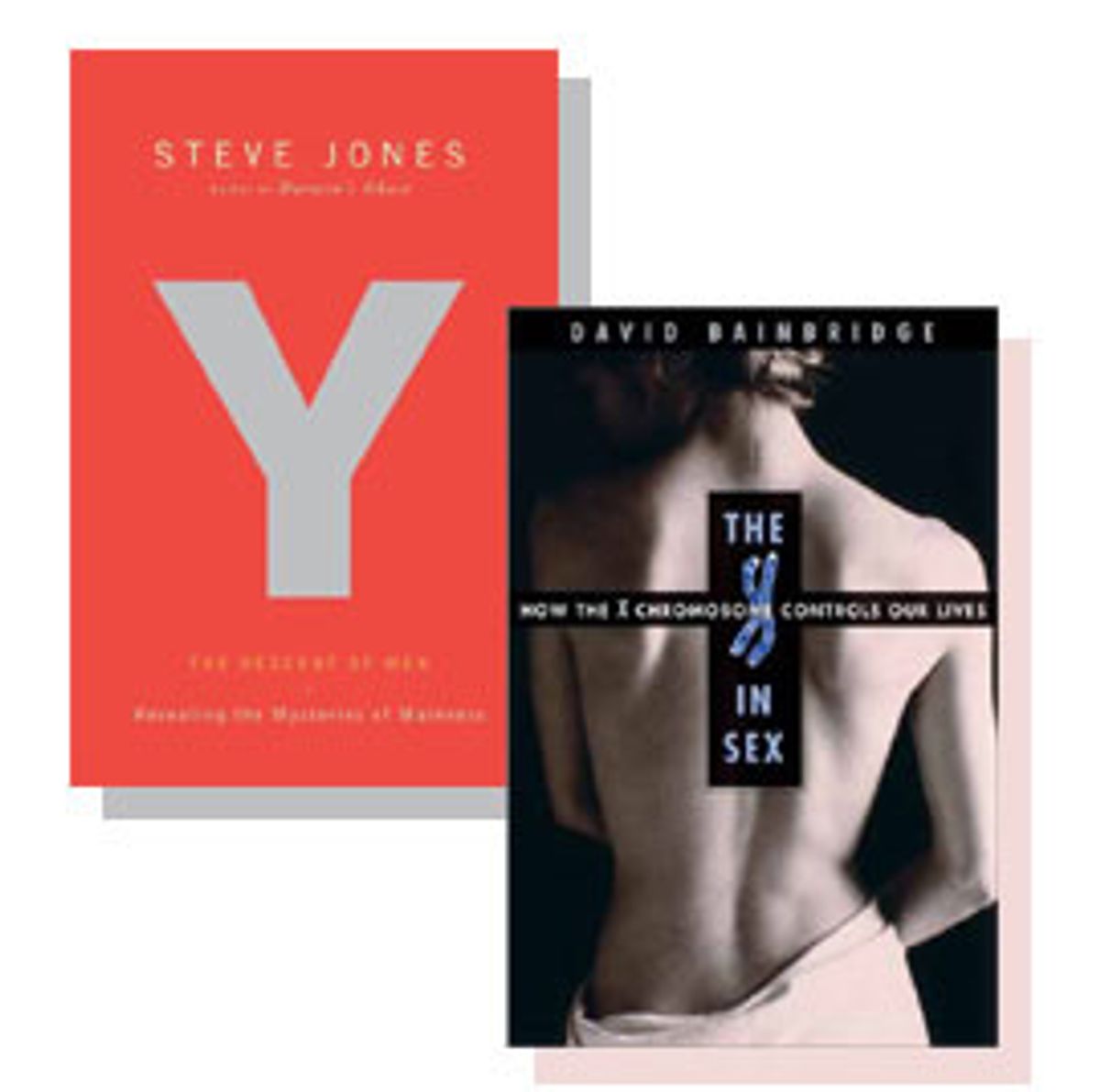 You walk into the bookstore and there's a book on display called "Dust: A Universal History." It's really interesting. It follows the history of dust from the big bang to the rise of human civilization in the dusty regions of the Middle East to the invention of commercial dusting sprays and chemical-impregnated dust cloths. And then a chapter, "Dust to Dust," describing the slow work of wind and water, and (finally) of entropy itself, returning all that's solid in the universe into dusty particulate matter. And there you have it all, pretty much. Dust -- who knew?

Then you're in the bookstore and there's this other book on display called "Bagels: The Story of Human Civilization." And it's really interesting. It starts with the cultivation of the sesame seed (circa 4000 B.C.), skimming cursorily over the oft-told tale of wheat farming. You learn of the codification of kosher dietary laws, and of the early trade routes of the opium poppy (Papaver somniferum), from whose pods come the edible poppy seed. The recurring clashes between lactose-tolerant and lactose-intolerant peoples. The toroid: According to some scientists, the shape of the bagel is the shape of the very universe itself. The very universe. Well, gosh. Bagels -- who knew?

Then, some time later, you walk in and there's a book on display called, "Lint: A Head-Exploding Typhoon of Unlikely Connections, Showing How the Entire Universe Is Made of Nothing but Lint (Including You)." And clearly this trend is getting out of hand. You turn to the last chapter to see what sort of scientists might be saying that the universe is made out of...? Oh, string theory.

I'm just making all this up, of course. But ever since Jared Diamond's "Guns, Germs, and Steel," there's been a small avalanche of books like these; they start with tiny little monads of topics, and wind up trying to account for vast swaths of human or natural history (or both). Some are great, like Diamond's Pulitzer Prize-winning book and Mark Kurlansky's "Salt: A World History." Barbara Freese's book, "Coal," is really good. Other times, you get books like Steve Jones' "Y: The Descent of Men."

Jones is a sharp writer, a British geneticist with a measured style and a dry wit. He's also known for a certain boldness: His last jaunt was "Darwin's Ghost," a chapter-by-chapter revisiting of Darwin's "Origin of Species" that sought to bring the classic text to a wider readership, while updating it with everything that biologists have learned in the meantime. "Y: The Descent of Men" (the title is a riff on Darwin's later work, "The Descent of Man"), is a treatise on the Y-chromosome, the microscopic squiggle of DNA that divides maleness from femaleness, and on how it has affected the course of all life on the planet, including all of humanity (including you). Which it certainly has -- there's no doubt of that. And the Y-chromosome's workings on the cellular level are explained in lucid detail in David Bainbridge's very pleasurable and absorbing new book on the X-chromosome, "The X of Sex" (about which more anon).

Jones' conclusions are, however, somewhat far-reaching. The book says that because the Y-chromosome is really small and contains only a bit of genetic information, compared to the voluptuous female X-chromosome, all males are useless and inferior and destined for the dustbin of history.

Now, let's just allow that to hang in the air for a moment. Jones is staring at his computer monitor now with his jaw adrop, screaming how that's not fair and there's an awful lot more to it than that. And indeed there is. But "Y: The Descent of Men" is being touted as something of a companion volume to Natalie Angier's "Woman: An Intimate Geography." And when Jones says "males," he means not only the abstract principle of biological maleness, but male bodies and male humans. Like Jones and me, for instance, and possibly you as well. Certainly someone you know. We're talking about going from a microscopic scrap of proteins to a biological refutation of slightly less than half the human race.

The book does that fairly boldly, tending to use terms like "the Y chromosome," "sperm," "maleness" and "males" as though they were interchangeable, and giving human motives to cells and reproductive chemicals (and vice versa). Wherever you find that chromosome in nature, it suggests, you find a stadium full of Promise Keepers baying sea chanteys with their dicks out, a Texas barroom full of drunken NASCAR fans with their hands all over the waitresses, a firehose of testosterone and a rain of beef jerky. For instance, in Chapter 1, "Nature's Sole Mistake," Jones is writing about the fact that the Y-chromosome doesn't alter its genetic code from generation to generation: "Males evolved to stop females from degenerating into clones, but in their own intimate selves have suffered the same fate." From the same chapter, a few lines down: "Males are, in many ways, parasites upon their partners ... Like all vermin, from viruses to tapeworms, they force their reluctant landladies to adapt or to be overwhelmed."

Yow. But here's how the up-spiral begins that can take you from that one piece of lint in your pocket to the lint-shaped universe: From the level of microscopic proteins we move to the complex reproductive rites of different microbial, plant and animal species. Beetles are drilling holes in each other and sealing sperm inside their victims with plugs. Fruit flies are performing complex transactions. Fish, birds, mammals, etc. It's all really interesting, actually.

Then we find ourselves abruptly standing amid human history and biology -- with citations from 19th century novels and treatises, references to virility-enhancing patent medicines, the rates of boys and girls born in China and India. The economics of primogeniture, the rate of pay for semen samples, artificial insemination, the workings of the human penis, the history of circumcision and castration.

Jones is careful throughout the book to keep noting that sex is not the same as human gender, that biology and sociology should not be confused. But then he keeps imbuing tiny chemical reactions with world-shaking portent, reducing world-historical trends to the business of mating. There's a long jaunt through the founding of human ethnic populations, as traced by DNA research. That part and a few others seem a bit out of place, actually. Then there's more on reproduction in different animal species, and then the book concludes with a chapter on the rising rates of human male genital deformity and human male social alienation, in these modern times. Sperm counts are lowering. Women are out-earning their husbands. "Manhood," it says, "is in full retreat." The "fate" of the male sex is "encoded on the Y chromosome."

It seems like a lifetime ago now, but we were talking before about how all Jones' conclusions spring from the size and mechanics of that Y chromosome, that "most decayed, redundant and parasitic" of genetic structures, that evolutionary blank cartridge. It's a little scrap of a thing that insinuates itself into the female genetic line, and (like a virus) forces egg cells -- genetically complete in themselves -- to produce Y-infused offspring. The world has long been unwillingly awash in semen, infested with spermatozoa.

Jones is still screaming. Look, Jones, you're chair of the Galton Laboratory and a professor of genetics. I think perhaps you were writing a book about, among other things, the science of maleness, of the penis, of the founding of human ethnic populations as traced through DNA, and all that other ordinary but cool man-type stuff that ended up in "Y." That would have been a good book. But the editor got his or her claws into the project, didn't she? Or he -- it's possible your editor was a he. "It's got to be sexier! Think bigger!" she said. Do you know what she said? "Steve," she said, "men don't read books." I'm looking at the introduction now. It says, "This volume should be of interest to at least half the population." Hmm.

Or maybe I'm wrong. But it's possible to read "Y" and still not get a clear notion of what that pesky Y-chromosome actually is, how it works, or what it's really for. David Bainbridge's "The X of Sex" doesn't try to be of interest to half the population. It's for people who want to read interesting, cool stuff about genetics, written in a clear and literate hand with lots of anecdotal examples. Bainbridge is a Brit as well, a lecturer at a veterinary college. According to him, the Y-chromosome is sort of a useful thing.

Briefly, human embryos are female by default. This doesn't mean that girls are better, or more authentically human, than boys. Bainbridge dismisses that notion right away -- it could just as easily be spun as, "Males are more special." In fact, men and women are exactly the same animals genetically -- in our genitalia, our brains and body shapes, our innate potential to play credible lead guitar or even drums. The information on our "female" X-chromosomes is genderless, and both sexes have the same amount of it. The Y-chromosome is merely an extra snippet of genetic code that triggers default female body parts to develop into specialized male ones. Embryos that have the Y develop as males, and can pass it on (unaltered) to other generations. Embryos that don't have the Y have a duplicate, inactive X-chromosome instead, and develop as females.

Now, you would suppose there might be a reason for this. Despite the practically infinite modes of reproduction that go on from species to species, with beetles wielding drill-bit penises, oysters changing from male to female and back again, fish engulfing their partners, cells cloning themselves through division, etc., the reason to have two sexes is always the same. It's the easiest way to swap DNA from one individual to another, which is how the evolutionary gene pot stays simmering. If organisms just cloned themselves, random mutation would be the only way for them to adapt and change over time, to split off into new species, to evolve. Most probably, life on earth would still be a lot of blobby algae-like stuff drifting around in the ocean -- forever.

So this tiny, obsolete, parasitical scrap of code actually accomplishes something. Somebody could even write a book about it. Moreover, DNA-swapping is the only thing that "maleness" and "femaleness" are consistently about, from one species to the next. All other sex-related differences -- size, plumage, salary, behavior, proficiency on lead guitar -- are variable over the course of generations, and they are as widely disparate among species as rhubarb plants are different from lobsters. Meaning: Even if the human male is, as Jones claims, of no special utility at this very instant, these last 30 or so years of industrial civilization (a single generation, Mr. Jones!), things have a way of being quite a bit different every few hundred thousand years. And somebody, Mr. Jones, is still going to have to program the DVD player around here. Oh yes, let's just wait and see who that will be.