Harrison Ford and Josh Hartnett team up -- and fight the bad guys on kiddie bikes! -- in this amusing cop movie about the murder of two rappers. 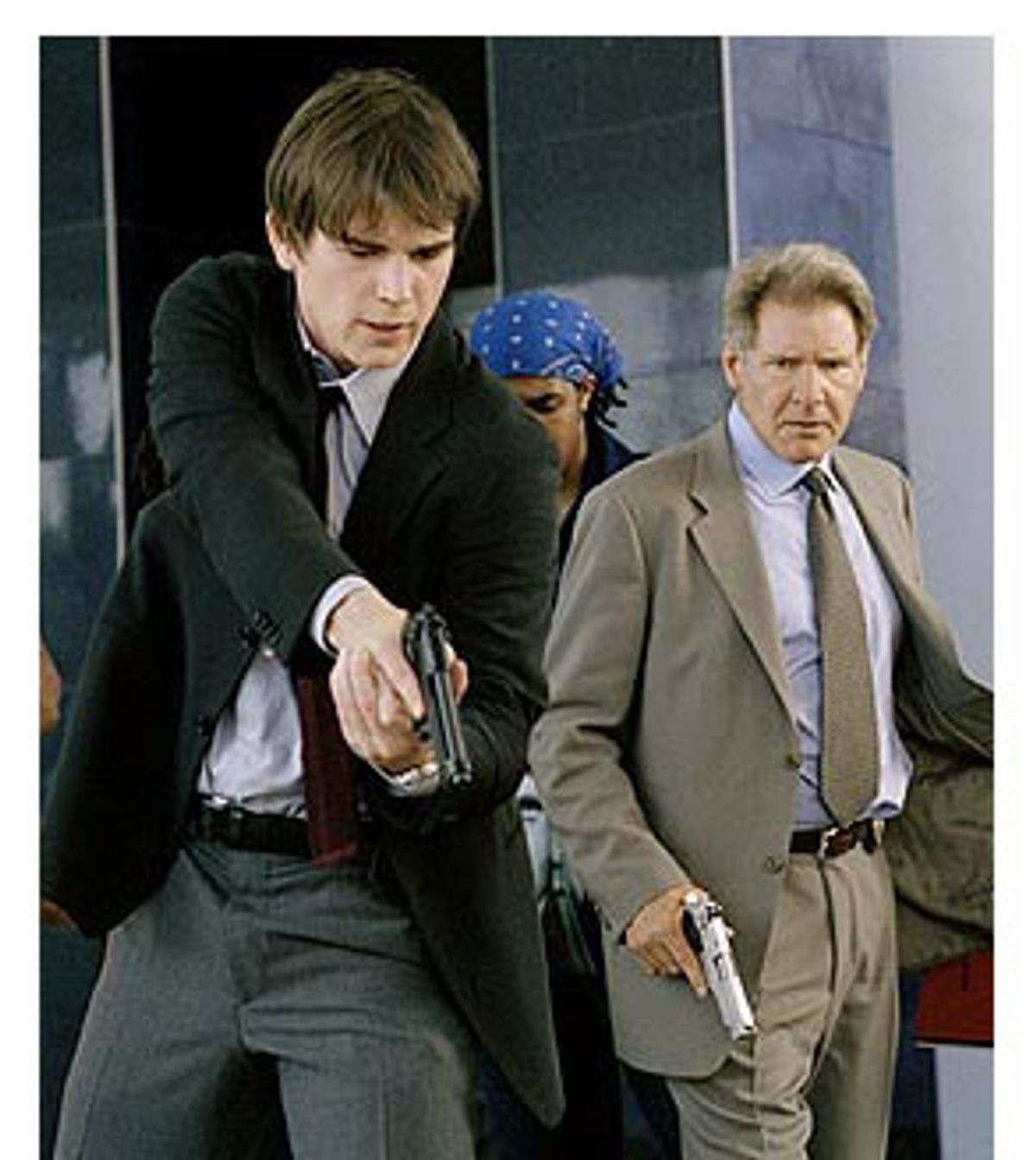 There must be a way to revitalize the cop-movie genre, particularly when it comes to chase scenes. But is putting Harrison Ford on a little girl's banana-seat bike -- Schwinned to the max, he pedals after the baddies with grim determination -- really the answer? Particularly following, as it does, a death-defying paddle-boat chase sequence? Ron Shelton's "Hollywood Homicide" is a reasonably entertaining picture that nevertheless leaves you wondering -- what, exactly, did I just see?

At the center of "Hollywood Homicide" is the story of the murder of a couple of up-and-coming rappers (shades of Biggie and Tupac there). Why were they killed, and by whom? For better or worse, those questions aren't particularly intriguing to Shelton, who co-wrote the script with Robert Souza, himself a veteran Los Angeles homicide investigator. Shelton and Souza are much more interested in the personal lives of their two leads, Ford's Joe Gavilan, a veteran cop who sure is good at barking his lunch order at department underlings, and Josh Hartnett's much greener K.C. Calden, a sensitive soul who's deeply interested in Far Eastern spirituality, particularly insofar as it proves extremely useful in picking up babes. Together they shamble and shuffle -- Ford does the shambling, Hartnett the shuffling -- through their investigation of the murder, hampered by the fact that the head of the department's internal affairs bureau, Bennie Macko (Bruce Greenwood), is trying to bring Gavilan down on some obviously trumped-up (if not wholly invented) charges.

Shelton is an intelligent director, and he has a knack for exploring friendships between regular guys without reducing them to back-slapping clichés or there's-a-tear-in-my-beer sentimental slop. "Hollywood Homicide" is least entertaining when it's leading us down the trail of the conventional cop thriller. Isaiah Washington plays Antoine Sartain, the rich and glamorous music-industry player who may have had a hand in the murders. He's suave and intriguing, up to a point, but the murder subplot adds up to very little in the final shape of the movie.

The picture moves more smoothly when Shelton focuses on the affable but not completely comfortable relationship between K.C. and Gavilan. K.C., like just about everybody else in Hollywood, would rather be an actor than a cop; as the two tool around Hollywood, checking out leads, Gavilan feeds K.C. lines from "A Streetcar Named Desire" in a flat monotone (he's got half an eye on the road and one and a half eyes on the script, which he has propped against the steering wheel). Gavilan, who has several ex-wives and heaps of child-support payments to attend to, works an extra job on the side as a real-estate agent. At first, his attempts to sell a house he's been stuck with are mildly fun to watch -- they give Ford a chance to exercise his trademark hangdog desperation, and he's always at his best when he's allowed to poke fun at his own crustiness.

But after a while, you just wish Gavilan would sell the stupid house already. And although K.C. is extremely excited about the "Streetcar" showcase he's organized for a bunch of local movers and shakers -- he's convinced it will be the thing that breaks him into acting -- we all know that in the end he'll always want to be a cop. (There's another subplot about his deceased father, who was also a cop -- for those of you who are keeping track at home on your multiple-subplot scorecards.) Hartnett, with his dreamy mood-ring eyes, certainly isn't torture to look at. And he's relaxed and funny here. But his presence doesn't stick with you; there's something almost ethereal about him, as if he could somehow meditate himself out of existence. If you were a corpse, is that the sort of cop you'd want investigating your murder?

Naturally, that's probably the point. "Hollywood Homicide" is a comedy and a buddy movie, and part of the pleasure of it is seeing how these two partners -- an unlikely match for each other, and both of them, in some ways, not all that well suited to being cops in the first place -- manage to muddle through and come out on top. And "Hollywood Homicide" is a definite improvement on the recent spate of dull action movies, if only because it has such a marked sense of humor about itself and the genre it belongs to. But somehow it never quite finds its center. To his credit, Shelton knows the genre needs a good poke. His focus just isn't sharp enough here to hit the bull's-eye.