Are comic books art? Maybe, but this leaden, pretentious flick about Marvel Comics' big green id, from the overrated Ang Lee, is just schlock art for the NPR set. 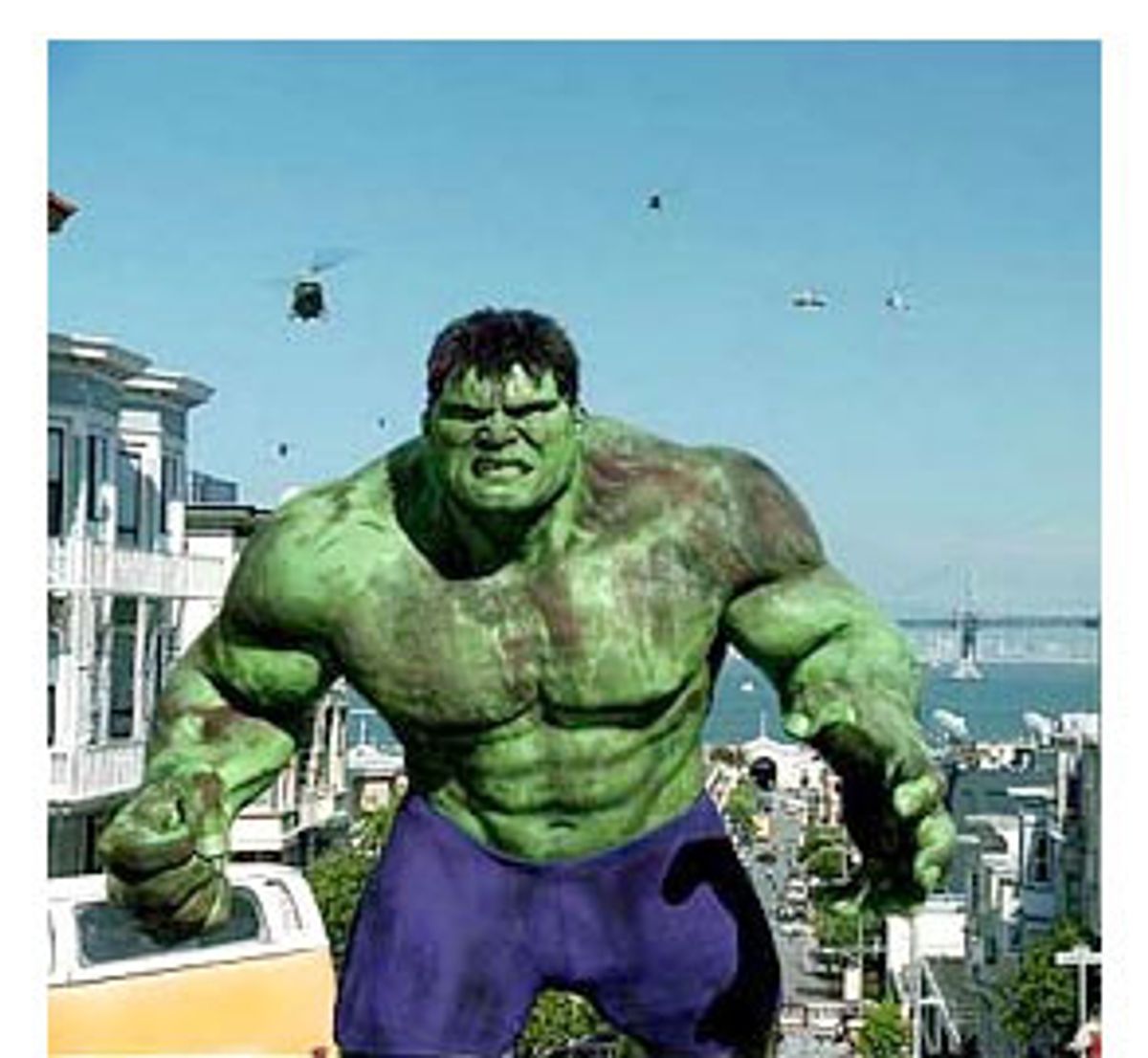 Will somebody please get Ang Lee away from popular culture -- anybody's popular culture? Lee's "The Hulk" has less of a feel for comic books than his "Crouching Tiger, Hidden Dragon" had for the Asian martial-arts movies it was based on. Lee has developed a considerable reputation as an artist and a craftsman, and except for the slight pleasures of his "Sense and Sensibility" (most of them having to do with the cast) I'm damned if I can figure out why. At best, he's a pedestrian storyteller with no feel for pacing or for the visceral, no discernible sense of humor and no sensibility for the enticements of pop entertainment. Worse, Lee has almost no instinct for the milieus he works in. Though he moved to the United States in 1978, his film of Rick Moody's novel "The Ice Storm" had the weird, dislocated feel that often comes when foreign directors try to capture "America."

What Lee does have, and what seems to earn him praise, is the type of good taste that deadens everything it touches. He combines the finger-sandwich finickiness of Merchant-Ivory with the cachet of "world cinema" (what, in another, more openly condescending age would be called "exoticism" by his admirers). That was most apparent in his most praised film, "Crouching Tiger, Hidden Dragon." The movie was exquisite and dead. The best martial-arts movies, like the wonderful "A Chinese Ghost Story," produced by Tsui Hark and directed by Ching Siu-Tung, are unself-conscious blends of storybook lyricism, violence and low comedy. One minute the heroes are flying through the air in a way that returns you to the wonder of seeing movies as you did when you were a kid, the next they're indulging in the most shameless knockabout comedy.

Lee has no taste for the low, and he's among the most self-conscious of filmmakers. So in "Crouching Tiger" he opted for refinement and the result was a placid formalism that was beautiful to look at and singularly unexciting. (It was particularly embarrassing, at last year's New York Film Festival, to see the restored print of the 1965 Hong Kong movie "Come Drink With Me," directed by King Hu and produced by the Shaw brothers, and to realize how much Lee had lifted from that film and yet how little he captured its spirit.) You could see what critics were responding to in "Crouching Tiger"; many had never seen anything like it. And that's what bugged me. The movie won praise from critics who had never deigned to go near commercial Hong Kong movies that didn't come with the imprimatur of art.

"The Hulk" isn't exactly refined. It's one thing for Chow Yun-Fat or Michelle Yeoh to soar through the air, another for an angry green monster to go on a rampage of destruction. But like "Crouching Tiger, Hidden Dragon," this movie takes itself very seriously. For "The Hulk's" visual busyness and its allusions to the configuration of the pages of comic books, Lee seems to be under the impression that he's working from myth instead of a good pulpy premise. "The Hulk" goes on for two hours and 20 minutes and there's not a stirring or exciting moment in it.

Universal Pictures seems determined to deflect the inevitable disappointment audiences will feel by emphasizing quotes (some from feature writers and not critics) that claim Lee is taking blockbuster filmmaking into daring new technical and emotional terrain. But the Hulk, who, despite his bulk, can leap across landscapes and zoom through the desert faster than the Roadrunner, is far more fleet than this lumbering mess of a movie. Lee and his screenwriters, John Turman, Michael France and James Schamus, have conceived of the story as -- no fooling -- an Oedipal tragedy. It's all about the conflict between fathers and their children, and at particularly tragic moments Danny Elfman's score includes the sounds of Eastern-sounding voices wailing lamentations. "The Hulk" might turn out to be particularly beloved by those who subscribe to the theory of recovered memory. It's a behemoth abused-child tale, whose angry green monster emerges from experiments conducted by the father of scientist Bruce Banner.

Banner (played by Eric Bana), who works in genetic testing in Berkeley, Calif., alongside his colleague and girlfriend Betty (Jennifer Connelly), has repressed all memories of his childhood, believing his parents dead. In movie terms, that means they're just dying to get out. Betty has parental troubles of her own, not having spoken to her father (Sam Elliott), an Army general, in years. Since it turns out that Betty's dad imprisoned Banner's dad (who was a military scientist), the movie is set up for a tale of two young lovers caught up in old rivalries.

It shouldn't be hard to come up with a workable scenario for a movie about a hero whose rage turns him into a monster. Ideally, the movie would get us cheering along with him the way we cheer when King Kong faces down his enemies. The best comic-book movies -- Tim Burton's "Batman," the Catwoman sections of "Batman Returns," and Bryan Singer's first "X-Men" -- sprang from heroes who were working out their childhood traumas and the pain of being "different." Burton and Singer were able to achieve moments of crazy, operatic grandeur. When Batman goes zooming in the Batmobile through the Wagnerian woods surrounding stately Wayne Manor, or Anna Paquin's Rogue sucks the life force from Hugh Jackman's Wolverine to heal the lethal wounds he has accidentally inflicted on her, those movies reach emotional peaks the composers of classical opera would be proud to call their own.

But "The Hulk" has no clear narrative or emotional arc. The movie seems populated with only villains -- sometimes it's the military, sometimes it's the creepy industrialist who wants to use the Hulk for his own purposes, and sometimes it's Banner's crazy dad (Nick Nolte, looking as if he were auditioning for "Quest for Fire"), who has returned to finish the experiments he started when his son was a boy. We don't even feel much for the Hulk. And that's partly because Eric Bana, with his wide face and beady eyes (and his unfortunate resemblance to '80s teen star Corey Feldman), seems to act primarily by furrowing his brow. There's no heroism or passion in this guy -- only the constipation of years of emotional torture.

Lee badly miscalculates by making the Hulk a big CGI creation. You feel no connection between the Hulk and Banner (the way you can feel the presence of the actor Andy Serkis in the CGI Gollum in the "Lord of the Rings" movies). He's just Lee's destructo machine. Perhaps Lee had to convince himself that he was doing something grand and mythic here to get through the action set pieces. But when the Hulk is flinging tanks around the desert or when battling three genetically engineered killer-mutant dogs (one of them, a standard poodle, is the drag-bar Cujo), you're watching the stiffest, most removed blammo scenes imaginable.

"The Hulk" isn't simply thrown together. It's achieved, slaved-over junk. Lee has done everything he could to bring the visual experience of reading a comic book to the screen. He bisects the screen with horizontal and vertical splits. He uses triple, quadruple and quintuple frames to re-create the look of a comic. He layers frames on top of each other with something going on in each. There are all sorts of tricky dissolves and cuts. Images seem to deliquesce into each other. Traumatic memories are presented in flash cuts and have the texture of melting Silly Sand. Two- and three-stage zooms take us from, for instance, a close-up of a frog's eye to an overview of the laboratory where the poor creature is the subject of an experiment. (Even exploding frogs are tasteful in this movie.)

Lee does so much in making this movie that nothing sticks. It's exhausting. The cinematographer, Frederick Elmes, shot "Blue Velvet" for David Lynch. Yet there are only two memorable images: Crazy Nolte watching his son's apartment in the dead of night, surrounded by his evil pooches, and a slow fade as Banner is shot with a tranquilizer dart and we see his white face floating in darkness before the screen goes black.

Mostly, "The Hulk" reminds you of other, better movies you wish you were watching: David Cronenberg's moving "The Fly," "Frankenstein" with Boris Karloff (the actor who makes CGI seem forever a paltry thing), and John Guillermin's lovely remake of "King Kong." (When Betty and Banner go for a walk with a team of military sharpshooters for an escort, I flashed on the scene in "The Godfather" where a gaggle of old Italian mamas serve as chaperones for Al Pacino and his Sicilian fiancée.)

You get the feeling that Lee and his team were so fixated on the visuals that they forgot to come up with a script. The dialogue is atrocious, running to lines like, "Look at you. Soon to be a great scientist," or, "Your friend is up to something. And I'm going to get to the bottom of it." The cast is stranded. Sam Elliott looks as strapping as usual, but his peppery laid-back appeal is straitjacketed into one of those stiff military-man roles: He's a hard-on with a brush cut. As she was in the fraudulent "A Beautiful Mind," Jennifer Connelly is stuck playing the long-suffering love interest to the tormented male lead. She's as focused and serious as always, but unlike in that movie, she doesn't get to give a performance.

Nick Nolte has perhaps the movie's one truly good moment: Beholding the monster that is his son, he reaches up a fatherly hand to stroke the creature's cheek. At other times, you can't decide whether he's the most committed actor in the movie or he should simply be committed. He seems torn between parodying the stereotypical mad-doctor role and digging to find some emotional nugget in it.

I can't imagine, beyond the inevitable opening-weekend boom, that "The Hulk" will have the emotional pull or narrative strength to satisfy audiences. (At the preview I attended, the scattered applause at the end went head-to-head with the boos.) But I did have an awful thought watching it. Like "Blade Runner" or "The Cable Guy," two bad, mucked-up movies that refused audiences the pleasure of a clear story or decipherable emotion, "The Hulk" could, in a few months' time, start to attract a coterie who will lament that it was too dark and daring for mainstream audiences. Maybe the perceived worthiness of Ang Lee's reputation will win out. The movie even figures out a noble function for the Hulk: He becomes the protector of the Latin American oppressed. At last, a comic-book movie that National Public Radio listeners can be proud to take their kids to see.