"From Justin to Kelly"

This criminally misguided musical for last year's processed-cheese American idols might be the worst movie you ever see -- but it's still not worth seeing. 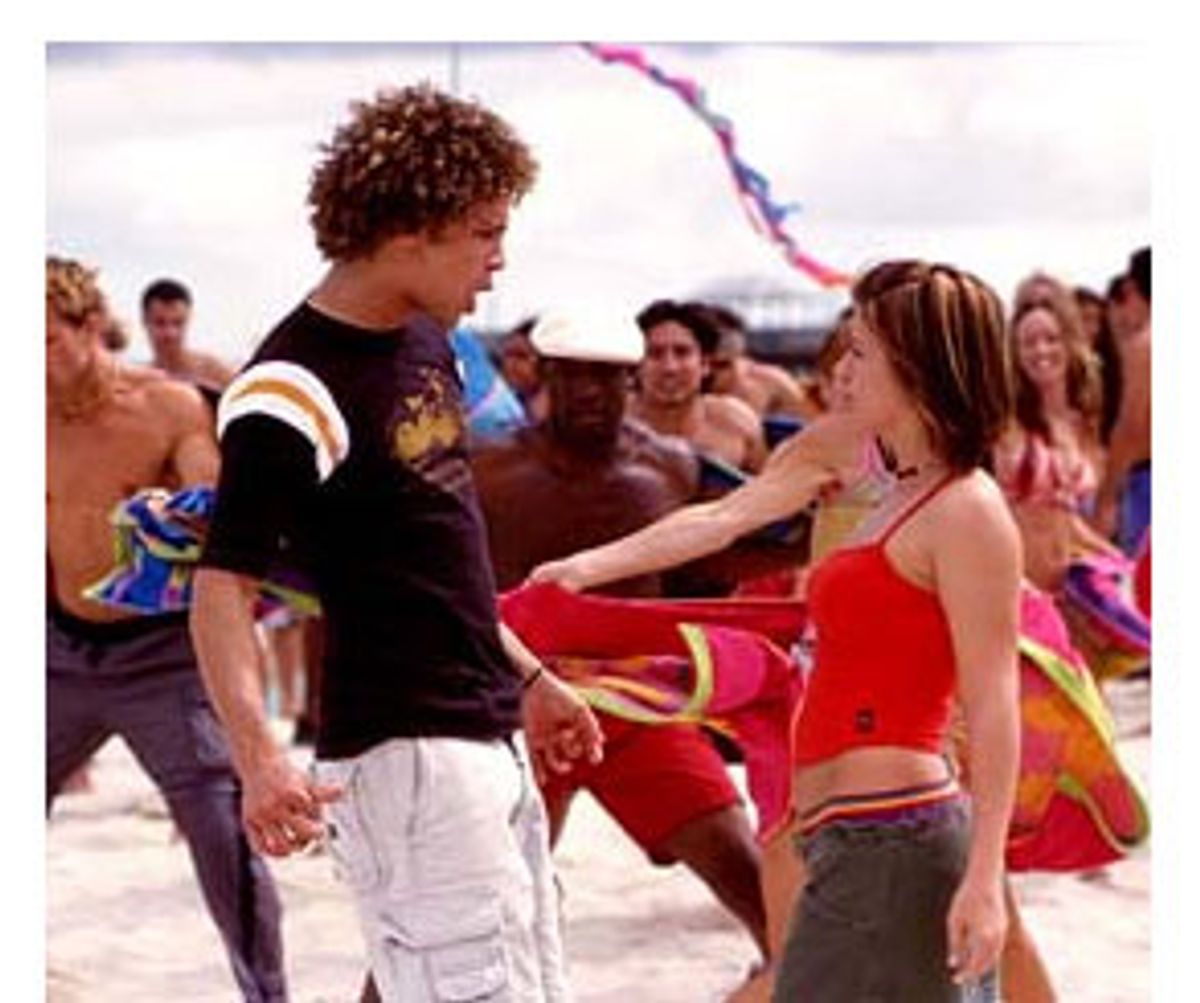 This "American Idol" spinoff musical is one of the worst movies you'll ever see -- but it's still not worth seeing.

Remember, girls, when you were 10 or 11, and you made your Barbie dolls go on dates, even if they had to stoop to dating your brother's G.I. Joe? Remember the kind of dialogue you'd dream up for your dolls, gleaned from years of watching washed-up stars romance each other on "The Love Boat"? Well, those early Barbie-improv experiences might just qualify you to write the screenplay of a $12 million summer movie.

If you don't believe me, feast your eyes on this scene from "From Justin to Kelly," in which Justin (Justin Guarini) and Kelly (Kelly Clarkson) putter around in a motorboat at sunset, alternately bellowing a song about how madly in love they are, and quietly, awkwardly discussing their budding romance.

Kelly: "So, do you bring all your girls out here?"

Justin: "No, I mostly come out here to think."

Kelly: "What are you thinking about now?"

Justin: "Thinking about how glad I am that you gave me a second chance."

My brother's G.I. Joe was always going places alone to think, too, probably because I already suspected that most guys spent far less time in quiet contemplation than I had hoped. Even so, I was a little disappointed that Kelly gave Justin a second chance, since it would've been more entertaining to watch Kelly sit around her hotel room eating corn dogs and painting her toenails than it was to witness a romance so unconvincing and leaden, you'd think both Justin and Kelly were gay and incredibly seasick.

But maybe they were still queasy from the first half-hour of the film, in which most of the scenes are less dynamic and original than a 6-year-old's puppet show. "Dude, this year, spring break is gonna rock!" proclaims one of Justin's two nondescript sidekicks. "We are going to go to the best parties and meet the hottest guys!" squeals one of Kelly's bland pals. Like strangers stuck on a crowded, smelly bus, Kelly and Justin don't meet but rather apprehend each other on the beach in one of the most awkward, badly choreographed, terribly edited party scenes ever made. In the unlucky couple's first moments dancing together, they look about as swept away as they might while pulling a wad of hair from a shower drain. The music is mixed badly and sounds flat and distant from the scene, and the camera seems to capture the dancing crowds at all the wrong moments, making every move look clumsy and out of sync with the music.

The horrible lighting and crappy makeup certainly don't help matters much. Despite the fun-in-the-sun theme, the entire movie seems to be shot under overcast skies, and the interior scenes are so badly lit, you probably have home movies that look a lot better. (The director here is Robert Iscove, previously in charge of such teen romances as "She's All That" and "Boys and Girls.") Kelly Clarkson is an attractive enough woman who can look beautiful with the proper makeup and lighting, but in this movie, she looks like somebody's frumpy cousin they were forced to bring to the party. Justin Guarini rings about as false as he did in the latter stages of last year's "American Idol" finals, and inexplicably strides around among the bare-chested men on the beach wearing cargo pants and long-sleeved shirts.

What's amazing is that a scripted, choreographed musical could be this bad, when party scenes from the flawed but enjoyable reality-movie flop "The Real Cancun" could lure a nun into the spirit of spring-break insanity. The producers of that movie took hours of footage of untrained dancers and random bystanders at clubs, and made them look like movie stars. The makers of "From Justin to Kelly" took two talented vocalists who are also able enough dancers, and made them look like "Fame" rejects. The bland lines that drop from their mouths make the drunken blatherings of the stars of "The Real Cancun" sound like snippets of Shakespeare.

But let's not forget the story, which brings us back to the days when Barbie's conniving best friend Superstar Barbie cheated with G.I. Joe in the Barbie Dreamhouse. You'll recall that Kelly and Justin meet and fall madly in love while pulling hair from a shower drain. Afterward Kelly's like, "So, do you really think he was looking at me?" and Kelly's nice friend Kaya (Anika Noni Rose) says that he totally was, but Kelly's evil friend Alexa (Katherine Bailess) gives Justin her cell number instead of Kelly's, and then enters Kelly in a whipped-cream bikini contest (Kelly's reaction: "You entered me in a whipped-cream bikini contest?!"), knowing that Justin is one of the contest's organizers and judges. Kelly thinks that is totally gross and there is, like, no way she's going to participate, which she demonstrates by shoving whipped cream in Justin's face. Burn! So then, Justin keeps messaging Kelly, but he's, like, messaging the wrong number the whole time, and Alexa keeps messaging back stuff like, "Sorry, not intrsted"! So Kelly tries to meet Justin but Alexa keeps changing the plans and not telling Kelly, but they do get to go on the boat ride and that's when they both start to bellow and swoon without looking at each other.

Which is pretty sly, since every time these two look at each other, they seem to be either stifling laughter or trying not to vomit all over each other's sneakers. And it would all be funny, if this weren't one of the worst ways you could possibly blow $12 million.

I know what you're thinking, though: "That sounds really bad, incredibly bad, so bad, in fact ... that it's good!" And I don't blame you for getting your hopes so high. After all, there weren't any press screenings for the movie, and Clarkson openly proclaimed that critics wouldn't like it. "They like stuff like 'In the Bedroom,'" she told TV Guide Online. "They're gonna want to tear into it because all people like to do is build something up to tear it down. This movie shouldn't be screened by the critics [sic] because it's not for them -- it's for the fans."

Clarkson should have known she'd send our expectations soaring with such comments. And maybe she did believe her movie might be the so-bad-it's-good hit of the season, a classic in the exalted tradition of "Crossroads" or "The Apple" or "Lambada: The Forbidden Dance."

But when Kelly sings an entire melodramatic ballad while walking zombie-like through an unattractive swatch of sand and trees, all emotionless and scrub-faced, as if she just rose from bed, and then Justin appears in the background like the villain in that scene in "Halloween II," only this scene really isn't supposed to be horrifying, it's just painful and no, it doesn't hurt so good. These two have incredible, soaring voices, and maybe they're not movie stars, but it might have been nice if some modicum of skill had been applied to making them look like they could be movie stars, instead of extras from "Night of the Living Dead." Justin and Kelly both looked a million times better sweating under the lights on "American Idol," and even their most tedious performances were far more entertaining than the endless boat ride and hideous beach march of "From Justin to Kelly."

Forget the critics. This movie doesn't just do a disservice to the fans, it does a horrible disservice to Justin and Kelly, manufactured stars who are new to the game and have to rely on their supposedly expert handlers to make them look good. America is more than willing to embrace manufactured celebrity, but part of the fun is seeing how the magic can transform a talented but ordinary kid into something larger than life. The makers of "From Justin to Kelly" didn't even bother to break out the pixie dust.