"We distort. You comply"

Even in a down economy, there are some business models that still work -- selling T-shirts comparing Fox News commentator Bill O'Reilly to Hitler, for example. 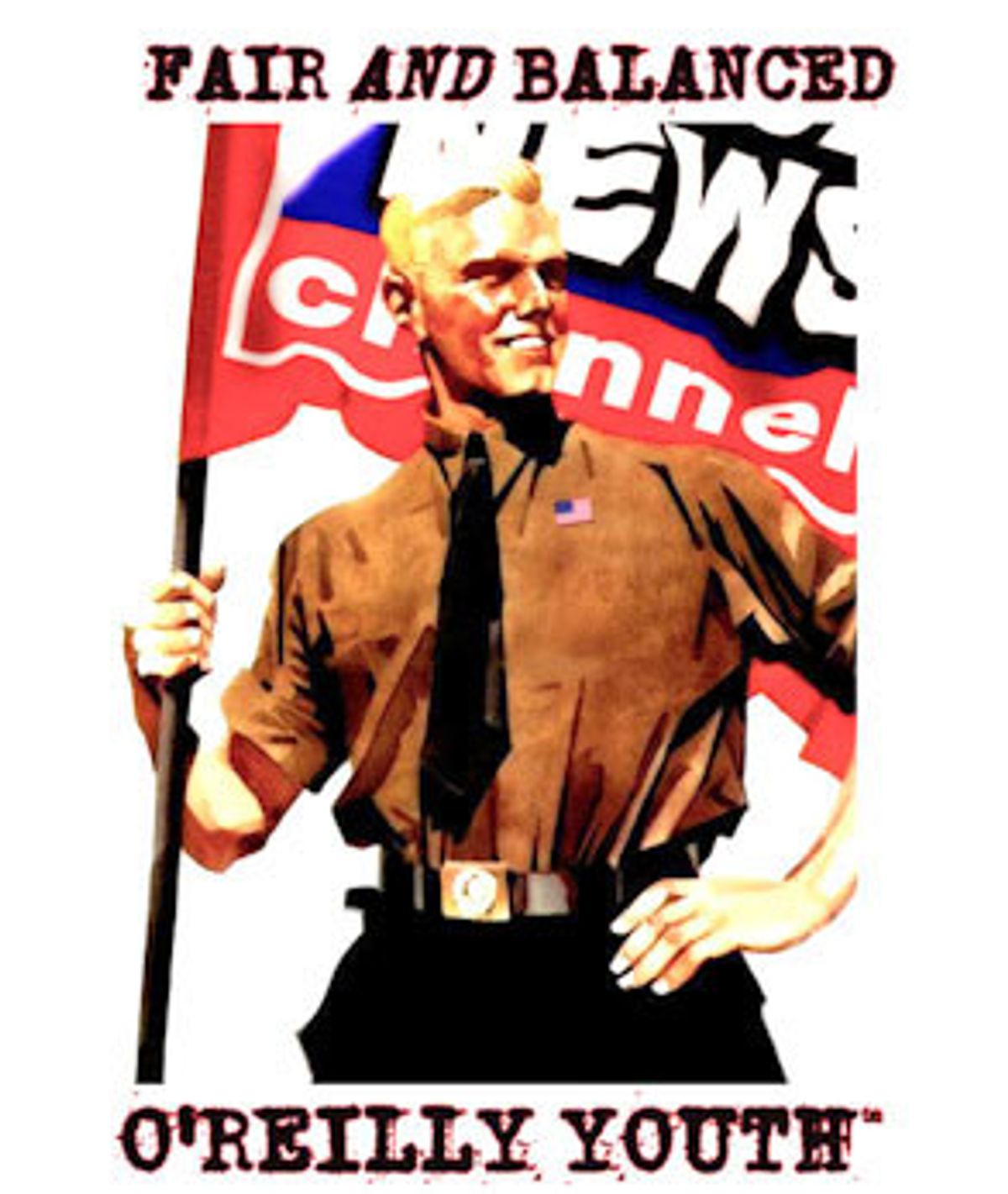 Agitproperties.com in Austin, Texas, sells "Faux News Channel" T-shirts that mock the Fox logo with the slogan "We distort. You comply." The company is an equal-opportunity network mocker -- it also sells "Pentagon News Network" T-shirts parodying the CNN logo.

But those two offerings are positively subtle compared to the T-shirt that puts a Hitler Youth spin on Fox fulminator Bill O'Reilly. A strapping young blond man brandishing a flag emblazoned with the words "news channel" is bracketed with the slogan "Fair and Balanced" and the title "O'Reilly Youth."

Lest anyone start thinking Bill O'Reilly has actually begun recruiting for his own fascist youth brigade, the site displays a prominent disclaimer right on the home page: "This Web site and the merchandise sold herein are parodies and as such are political satire protected by the First Amendment of the Constitution of the United States of America. Agitproperties.com is not connected with, approved or endorsed by Fox News Network LLC ..." and so on.

In a letter dated June 19, 2003, Christopher Silvestri, senior counsel for the network, accused Agitproperties.com of trademark infringement and ordered the company to stop selling the shirts. "Furthermore, the T-shirt 'O'Reilly Youth tee,' in addition to the infringements described herein, shows incredibly poor taste on your part, is highly offensive and clearly demonstrates your bad faith use of the Fox Copyrights and Trademarks," Silvestri wrote.

The guys at Agitproperties think that's pretty funny: "Now isn't that a hoot: to be accused of 'incredibly poor taste' by a representative of the network responsible for such benchmarks of good taste such as 'Temptation Island 3,' 'Joe Millionaire' and 'Stupid Behavior Caught on Tape,'" they wrote in a press release detailing the contretemps.

Richard Luckett, 46, a graphic designer in Austin -- "deep in enemy territory," he says -- started selling the shirts on street corners with his two partners, Brad First, a nightclub manager, and Rick Elms, an Austin bartender, at antiwar rallies in Washington and San Francisco earlier this year.

On their Web site, they feature links to news stories from around the world, along with incitements to buy their liberal propaganda. "I wanted to be an antidote to the mainstream U.S. media," says Luckett, who spent 20 years on the road as a merchandiser for bands like Duran Duran and Stevie Ray Vaughan.

But as Baghdad fell, so did T-shirt sales.

"After the so-called victory, all of a sudden our traffic and our sales just went to nothing. We were sitting around wondering what we should do and we got this cease-and-desist order from Fox," says Luckett.

You'd think the lawyers at Fox News were moonlighting for the marketing department of agitproperties.com.

As word of the cease-and-desist letter spread around liberal blogs, traffic to the site went from 300 people a day to 41,000. "I went from having five mentions on Google to six pages in 24 hours," says Luckett, who says that he's taken $3,000 worth of T-shirt orders in the last 24 hours.

The site has attracted so much traffic that by Thursday morning it was shut down temporarily for consuming too much bandwidth. The site was back up by Thursday afternoon.

Agitproperties.com hasn't formally responded to Fox's letter yet, but plans to. "Fox expected a tiny little company in Austin, Texas, to just roll over. This is definitely without a doubt a First Amendment issue. Americans should be free to speak their minds," says Luckett.

If Fox does decide to defend its copyright against the likes of the O'Reilly youth T-shirt in court, could the network have a case? Although the T-shirt peddlers say that they're just trying to make enough money from the shirts to keep their tiny alternative media site up and running, could they be prosecuted for profiting from Fox's trademark?

"The question is not whether they're selling the shirts for profit or not," says Fred Von Lohmann, senior staff attorney for the Electronic Frontier Foundation. "The real question is: Are people going to be confused? If you look at a T-shirt and it's clearly lampooning the trademark, no one is going to be confused. Then, the First Amendment gives you more protection.