Yeah, this low-budget tale of heartbreak and horniness in the Internet age is kinda trashy. It's also a sweeter romantic comedy than anything made in Hollywood this year. 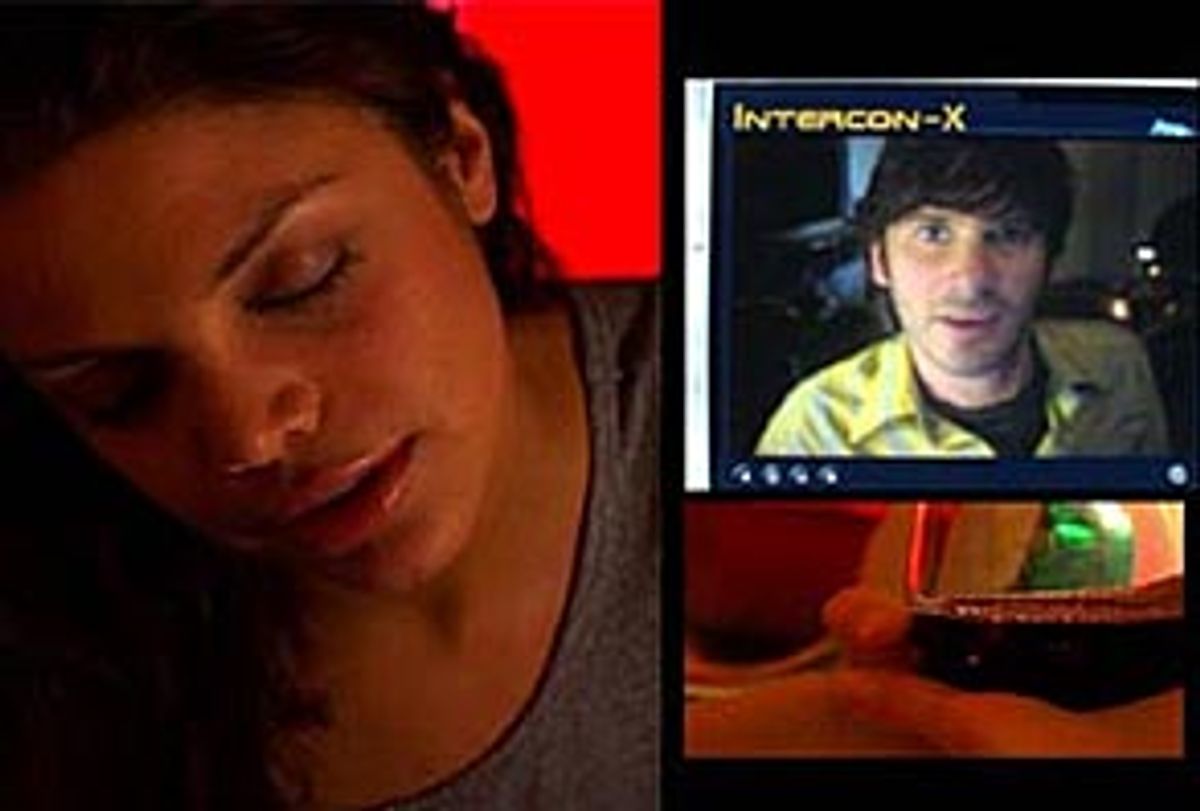 You really can't describe "On_Line" as a great movie or even an especially memorable one, but it fills a niche that seems to be vanishing from the American pop-culture scene, one for which I feel a particular fondness: well-crafted late-night sleaze. It's exactly the kind of movie you'd watch on USA cable in the middle of an insomniac night, hoping for nothing more than some hot, if ludicrous, sex -- and then find yourself thinking about at your desk the next day.

What's sexy about "On_Line," in the great tradition of late-night sleaze, is more the way it feels than anything that actually happens. It's a tightly focused little picture, shot fast and cheap on digital video in a few New York locations: a few apartments, a coffee house, a nightclub. In tracking the voyage of John (Josh Hamilton), a heartbroken Internet geek, from borderline loser weirdo back to Normal Boyfriend Man, Weintrob's principal tool is of course the computer screen. "On_Line" occasionally suffers from digital editing syndrome, meaning a surfeit of frame-within-frame and split-screen compositions. But unlike almost every other movie made about the Internet, it's at least vaguely plausible in both human and technological terms.

John, a shaggy, agreeable sheepdog type with a take-me-home expression that's perfectly poised between hunk and stalker, is the co-founder of a live Web-porn company with his college buddy Moe (Harold Perrineau, of "The Matrix Reloaded" and TV's "Oz"). For Moe, hooking up their horny clients and role-playing pros (both male and female) via video streaming is just a job, but John, recently dumped by a fiancée we never meet, can't seem to tear himself away from the screen. In particular, he can't stop watching a webcam woman named Angel (not one of the company's pros) who mostly isn't doing anything hot: She changes into workout clothes, takes a bath, hits the hay.

Each of these guys gets mixed up with the wrong girl, in classic romantic-comedy fashion. Moe, the smooth-talking ladies' man, picks up cafe waitress Moira (Isabel Gillies), a stringy-haired, clingy, artistic type who we can immediately tell would be the perfect rebound girlfriend for John. Meanwhile, John, emboldened by sheer Internet horniness, enjoys a smoldering virtual session with the Amazon-like Jordan (Vanessa Ferlito), one of his own company's online video babes. So while Moira is trying to get Moe to tell her he loves her (on, like, their second hookup), Jordan, clad in an outrageously skimpy outfit, is dragging John to dance clubs where he sits in a corner with a Bud like a frightened hamster.

There's nothing unconventional or daring about "On_Line," but considering how cheap it undoubtedly was to make, the acting, writing and direction all stand up pretty well; this is more intelligent and better structured than at least half the Hollywood movies I see. Weintrob and co-writer Andrew Osborne have grasped the obvious potential of Internet chat rooms as a way of linking unrelated characters and plot strands together. Moira's late-night confidante (on a hilariously grim chat site for would-be suicides) is a lonely Ohio gay boy named Ed (Eric Millegan), whose only outlet is virtual S/M sessions with Al (John Fleck), one of John and Moe's freelance employees, whose best pal is Jordan.

As John, Hamilton starts out seeming like a creepy nonentity and gradually wins us over (quite an accomplishment for a character who is seen at one point jerking off into one of his roommate's athletic socks). He's depressed and a little weird but has a generous, self-deprecating sense of humor. John's nightclub internal monologue, as he watches Jordan dance and reflects on how hot she is, how shallow he is for thinking that and how little chance he has of actually getting in her pants in the off-line world, is probably the movie's high point.

But all the actors here are pretty enjoyable, from the suave Perrineau (much closer to being a star now than he was when this was made) to the adorable ugly-duckling Gillies, the sultry eye candy of Ferlito and the misunderstood teen pout of Millegan. (John Fleck, who plays perhaps the least well-developed role in this ensemble, had his 15 minutes of fame more than a decade ago as one of the "NEA Four," suing the National Endowment for the Arts along with fellow New York performance artists Karen Finley, Holly Hughes and Tim Miller.)