The future was so bright

Wired's techno-idealism jolted America before it flamed out. Gary Wolf's new book vividly recalls the magazine's wild and woolly saga, but leaves the big question hanging: Was it right? 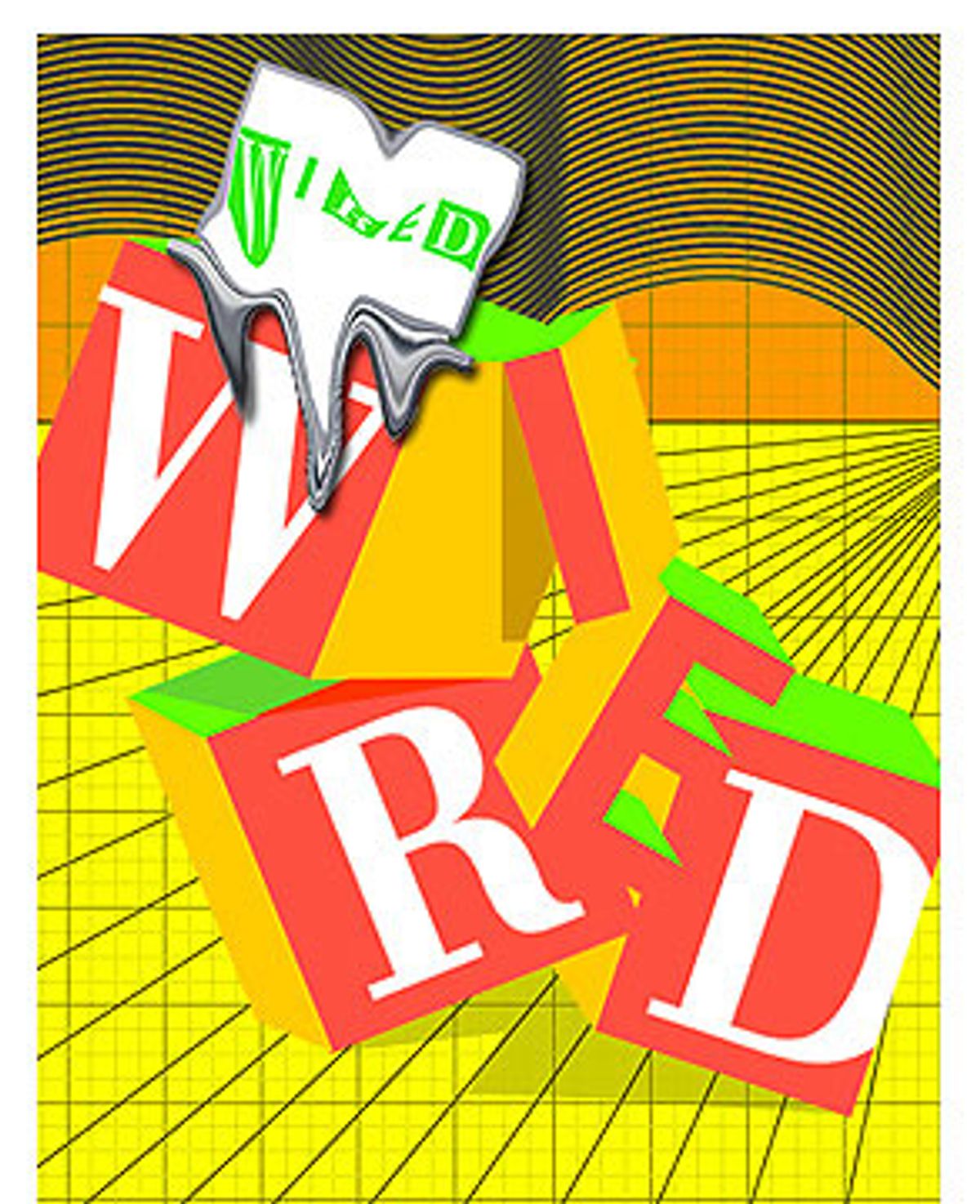 "We are here to sell the whole culture," Kevin Kelly, Wired magazine's executive editor, told me, as he snatched hurried bites of a sandwich during a typically frenetic workday. The time was January 1994; the place was Wired's first offices, on Second St. in San Francisco, overlooking the entrance to South Park, soon to become ground zero of the Internet economy. And the attitude? The attitude was all Wired: intelligent and arrogant, with a liberal dash of hype.

I was a reporter for a local free weekly assigned to do a feature on the magazine, then barely a year old, but already sending fibrillations through the global media nervous system. Before I made my way to Kelly's office, I had to struggle through camera crews from Germany and CNN, and avoid being swamped by the confidence of the staffers strutting about with all the poise of digitally anointed true believers. The Internet was poised to break mainstream, the Web was just beginning to penetrate public awareness, and Wired was in the right place at the perfect time -- covering, participating, and aiming to profit from, the "revolution."

Reading "Wired: A Romance," Gary Wolf's eloquent and evocative account of the magazine's rise to prominence and subsequent plunge into melodrama, brings back those days with scintillating clarity. Let me get the disclaimers taken care of immediately: In the course of writing a book, an online column, and a handful of magazine features for Wired's various divisions, I came to know, personally and collegially, many of the characters in "Wired: A Romance." And like most reporters who covered the Internet and were based in the Bay Area I followed every DayGlo-highlighted twist in Wired's fortunes with obsessive interest. But I was always on the periphery, and never at the red-hot center.

But from where I sat, Wolf gets it right -- his characterizations are dead on, his history misses no major points, his analysis is appropriate. His portrayal of Louis Rossetto, the libertarian-leaning, autocratic mastermind behind Wired, is unstinting: fully-fleshed, honest and fearless. His account of the financial maneuverings involved in Wired's failed attempt to go public, and the ensuing ouster of Rossetto and his partner Jane Metcalfe from the magazine they created, is illuminating. To read "Wired: A Romance" is to relive a particular moment of history in digitally precise detail. It puts other attempts in the same genre, such as James Ledbetter's "Starving to Death on $200 Million: The Short, Absurd Life of the Industry Standard" and Michael Wolff's "Burn Rate," to shame. More accurate, more empathetic, more true.

Wolf executes so well what he sets out to do, that perhaps the only meaningful criticism one could make is to wish he had aspired to more. Wired strove to cover the essence of what mattered about new technology -- culturally, politically, socially and economically -- better than any other publication, and at the same time it was dead set on capitalizing on its position in the new economy with a hubris and ambition that aimed to shove old media into history's dustbin. Telling Wired's story is thus a perfect opportunity to explore how media, technology and money swirled together in one seething cauldron in the late '90s, and to figure out just where it is exactly that we've ended up.

But Wolf holds back. Which is not to say that he ignores such issues, or treats them trivially. "Wired: A Romance" is a very good book, and there are ample hints and pointers to the larger significances of Wired's story. But in what had to be a conscious decision, Wolf chooses not to attempt to resolve some of the questions he raises -- for example, whether Louis Rossetto's beliefs in the politically and economically transformative powers of new technology have actually been borne out, or contradicted, by events. Instead of trying to knock the ball out of the park and use the story of Wired to grapple fully with the Internet's transformation of culture, media and society, Wolf tells a more constrained tale, one that ends the day Louis Rossetto and Jane Metcalfe were bought out of their stakes in their empire.

It is difficult to present what happened to "Louis and Jane" as a tragedy, notwithstanding the classic injustice of a pair of visionary founders being driven from their creation by cold-hearted financiers. Not only did the pair end up with plenty of money -- enough, says Wolf, to take care of several future generations; but they left so much ill will behind them with co-workers and business partners that it strains reality to see them as victims.

Nor does Wolf attempt to portray them as such. Louis Rossetto, especially, springs from the pages as a man who reaped what he sowed, whose hard-headedness brought him both victories and defeat. But he also emerges as a fully intriguing person, neither the power-mad tyrant that many of his detractors made him out to be nor the clueless Web ignoramus that some of his own not-even-wet-behind-the-ears employees painted him as.

It's a tribute to Wolf's skill as a writer that Rossetto emerges as complex, interesting figure. But then, "Wired: A Romance" has the feel of a book in which every word was weighed carefully, every sentence polished. Of Louis and Jane's relationship, tested by the politics and maneuvering and backbiting that were apparently staple features of Wired life, Wolf writes, "They were bound to each other more closely now than before the launch; theirs was the type of link that is strengthened by hammering."

Or, referring to the moment when Kevin Kelly was brought aboard: "When Kevin accepted, Wired ceased to be a vanguard computer magazine and became something even stranger: a radical attempt to reacquaint its audience with the prospect of a happy future. His arrival also changed the atmosphere. When the two men cooperated, Kevin's metaphysical confidence worked upon Louis's pugnacity like oxygen on a fire."

Wolf even reworks the oldest of Internet-in-San Francisco clichés, the gold rush metaphor, and gives it fresh juice:

"'Gold rush' was a phrase still uttered by San Franciscans in tones of admiration and wonder, even if the fate of a typical forty-niner had been to arrive from his trip around Cape Horn sick from dysentery and near mad from narrow confinement; to march in his weakened state toward the mountains; to find no gold, and to die of starvation -- if he was not murdered by one of his friends."

Such writing makes "Wired: A Romance" a pleasure to read. The steady stream of gossipy personal observations and other tidbits -- affairs, drug use, conspiracy theories, it's all there! -- results in a book that slides down smoothly; it is effortlessly digestible.

For Louis Rossetto, digital technology represented a chance to upend traditional structures of power. As Wolf writes: "Louis had been a libertarian since his first years of adulthood, but even libertarianism -- which was still, after all, a political doctrine -- seemed too confining for him now. The answer could not be another political revolution that would simply repeat the mistakes of the past. Instead, Wired would advocate what Louis called spontaneous order. Spontaneous order was a more benign mode of human civilization that was inherent in digital technology. State authorities always depended upon media to manipulate the population; but when computers democratized media, governments would lose their control."

And not just governments -- media organizations and the "old" economy titans would also come under assault. In one of the examples of the unity between what Wired preached and practiced, Wired itself was going to be a spontaneously organized new media organism that replaced tired old ways of doing media business. HotWired, the online arm (at which Gary Wolf served as executive editor), was a constantly evolving experiment in jump-starting a new publishing business model for a new era. There was even talk, which didn't last long, of "way new journalism" -- epitomized when Wired assigned Joshua Quittner to write a story on one of Wired's own commodities, the Web site Suck.

But Louis Rossetto interleaved his visionary pronouncements about the breakdown of old structures with a countervailing scorn for the old-school Net idealists who saw new digital technologies as somehow offering a non-capitalist or non-commercial alternative to more profit-minded ways of doing business. As he ranted in one in-house e-mail republished by Wolf:

"'A gift economy outside a small tribal setting doesn't work, period. The idea that the Net was, is, or can be a gift economy is the real nonsense in this discussion ..."

Wolf is excellent at presenting us a picture of Louis Rossetto that lives and breathes with verisimilitude, but he eschews any overt evaluation of whether Rossetto was right. We end up, at the end of the romance, knowing what happened, but it's less clear what it all means.

Wired, as a business, was chewed up and spit out by the old economy. The magazine is now a solidly performing jewel in the Condé Nast crown, while the online site is a shadow of its former self, a cog in the TerraLycos machine. In the media world at large, Time Warner -- which, when purchased by AOL, might have seemed like the ultimate proof of Rossetto's theories -- has now turned the tables on its new-media master and is redigesting its acquirer with all the grace of a python swallowing a water buffalo.

Meanwhile, governments appear to be relatively unthreatened by digital rabble-rousing -- if anything, their powers of control have been heightened by the same access to digital technology that was supposed to give freedom fighters a leg up.

And in perhaps the most unexpected turn of events, the so-called "gift economy" -- in which members of a community give each other goods and services -- is flourishing. Linux and the volunteer-energized free software movement are examples of precisely the kind of spontaneous creation that Rossetto was enamored of. Free software threatens all kinds of hierarchies, but also embraces just the sort of idealism that Rossetto routinely dismissed with a sneer.

Wired and Rossetto heavily pushed the idea that there was a digerati constituency -- the "Netizen" vote, so to speak. But that constituency doesn't appear to have materialized. Without Rossetto, Wired is no longer the standard-bearer for an ideology, and even Rossetto himself is rarely heard from these days. So what's Wired's legacy? Do the ways in which the future has played itself out undermine the rhetoric and excitement that suffused the early days?

While Wolf ends his book neatly, just before the dot-com crash, and just after the final disposal of Wired's assets, there is little in the sense of true resolution. The dot-com bust, just like the boom before it, didn't truly represent the cultural and social implications of digital technology -- which is one very good reason why Wired is still around and thriving, despite the departure of its founders, despite the tech economy collapse that has done in so many of its competitors.

But where is Louis Rossetto? Silent in his plush Berkeley hills pad, the pioneer of the future is now an artifact of a distant past. Does he get a second act? Has he rethought any of his observations in the wake of what experience may have taught him? We don't know. "Wired: A Romance" tells an excellent story -- or "story about a story" as Wolf puts it in his introduction. But there's still more of the story to be told.