Beyond good and evil in Baltimore

HBO's morally complex, richly textured series "The Wire" is not just the best thing on TV -- it's a Homeric epic of modern America. 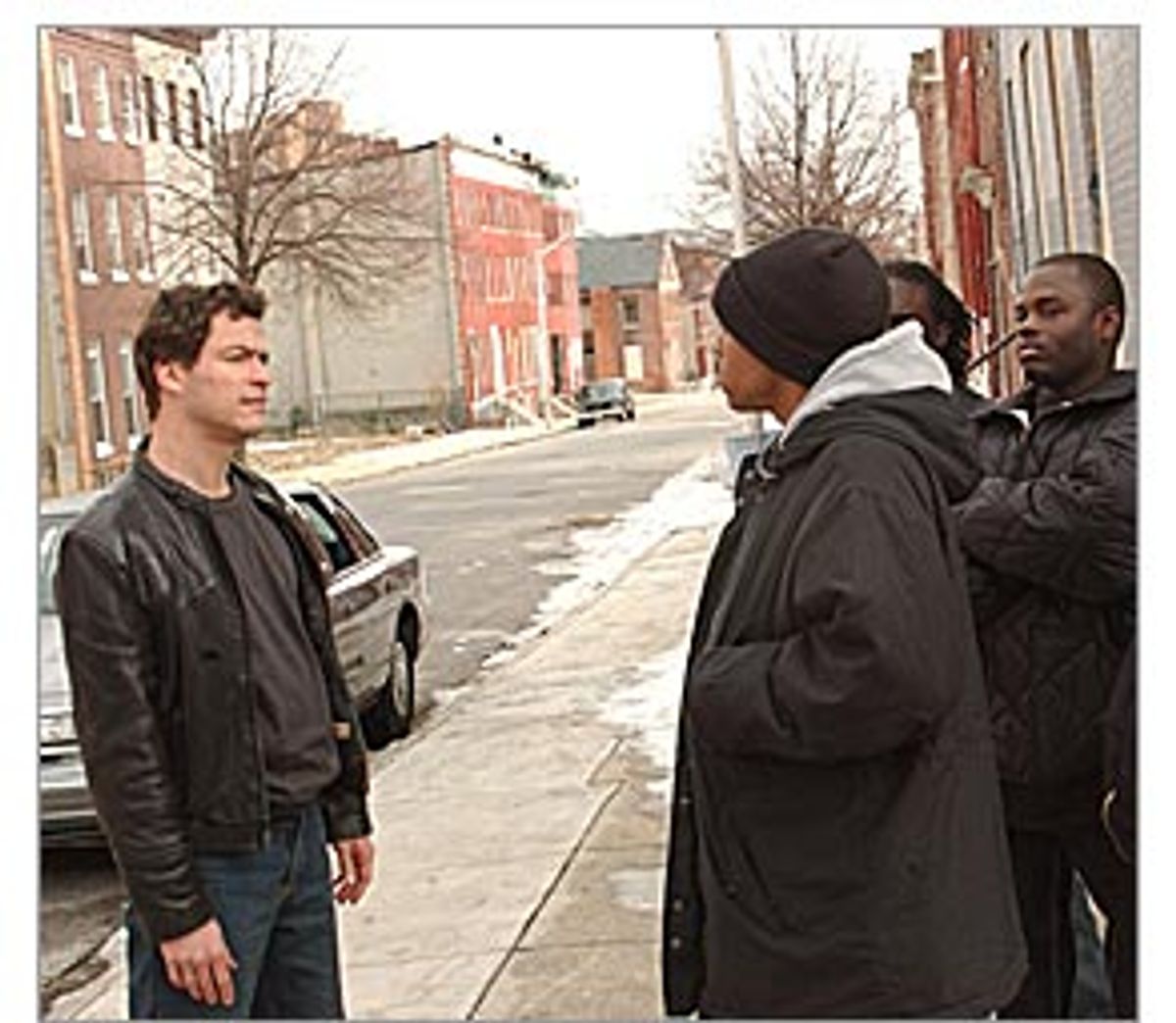 The TV world is made up of three kinds of people: 1) saintly public servants who strive to keep dangerous criminals off the streets, save innocents from death row and perform heart-lung transplants on disabled children in burning buildings; 2) devil-may-care villains who want to harm, maim and deceive as many women, children and small animals as possible, all the while getting high on crack and smashing stuff up with baseball bats; and 3) wisecracking jackasses with pretty, wisecracking wives and adorable, wisecracking children and three-bedroom houses with roughly the same living-room layout.

The motives of each TV type are spelled out over and over again, in countless dramas and sitcoms up and down the dial. The saints want to make the world a better place (which is apparently a tough row to hoe, given how many of the saints also battle with alcoholism), the villains crave the kind of power afforded to those willing to ignore all rules, and the jackasses want to avoid getting canceled so that they never have to go back to doing stand-up in the Scrooge McDuck Lounge of a Disney-themed cruise ship.

And then there's "The Wire" (Sundays at 9:30 p.m. on HBO, with repeats throughout the week), a richly textured universe unto itself, populated by detectives, drug dealers, longshoremen, politicians and lawyers who have motives so diverse, surprising and complicated, each scene seems to reveal a new layer of depth and complexity. Watching this series is like navigating the streets of a genius-level SimCity -- it takes a while to grasp just how far from the TV-land basics creator David Simon is willing to wander.

For starters, the cops on "The Wire" don't investigate crimes out of the pureness of their hearts, working tirelessly to get to the truth. When Officer Jimmy McNulty (Dominic West) finds a body in the Baltimore harbor, he looks into it because he's bored with his new assignment and wants to stick it to his former bosses in Homicide. Police Major Stan Valchek (Al Brown) comes down hard on union leader and fellow Polish-American Frank Sobotka (Chris Bauer) because Sobotka made a bigger donation to his Catholic Church than Valchek could make.

Deputy Commissioner Ervin Burrell (Frankie R. Faison) assigns Lt. Cedric Daniels (Lance Reddick) a key role in investigating Sobotka even though he and Daniels despise each other -- because Valchek, who holds the key to Burrell's promotion, wants Daniels on the job. Detective Shakima Greggs (Sonja Sohn) takes a desk job because her girlfriend worries about her safety and wants to start raising children together -- or, as a colleague puts it, she's pussy-whipped within an inch of her life.

Confused yet? Well, that's only the beginning. "The Wire" has the steepest learning curve of any show I can think of, but that makes sense, given how the series slowly and deliberately weaves together such a dense system of cause-and-effect, involving cops, lawyers, politicians, union leaders and drug dealers in an intricate network of favors for favors. For all the show's density, though, there's humor, insight and inner conflict in almost every scene.

A lot of these qualities radiate from the richness of the show's characters. Given the scope of "The Wire," it would be easy enough for Simon to assign each character one motive and leave it at that. But motives, like moods, shift constantly, and few of the characters on this series struggle through their daily grind with a consistent, transcendent vision of why they do what they do. Instead, they simply stay the course, often discouraged, blind and bitter along the way -- which may be one reason why it's so impossible to fault any one of them, cops or criminals, for trying to get by however they can.

In other words, this is not television crafted to bring cheap satisfaction. Once you start to understand that the street thug may be more of an idealist than the cop pursuing him, or start to wonder whether the dockworker whose bribes have led to a horrifying pileup of deaths is an honorable guy or a juvenile idiot, things get increasingly uncomfortable. One dirty cop might be more despicable than a drug kingpin, but that doesn't mean this is an upside-down world like Dennis Hopper's "Colors" either.

It's tough, in fact, not to encounter Simon's characters just like people you meet in real life -- some people you naturally like, others you instinctively don't. Unfortunately, on "The Wire," a lot of the most likable characters are usually either frustratingly flawed, or they're criminals. Most second graders can tell you that rooting for the crack dealer will only bring you a world of pain, but what can you do? He seems gentle, he tells good jokes and the guy's got to find a way to survive, right?

But then, survival means very different things to different people. For dockworker Nick (Pablo Schreiber), survival means finding enough work so he can get an apartment with his girlfriend and daughter, but even as he works to make this happen, he can't bring himself to tell her how important it is to him. For his cousin Ziggy (James Ransone), survival means buying a $2,000 Italian leather coat and wearing it to his job at the docks the next day.

For drug-gang lieutenant Stringer Bell (Idris Elba), survival means paying a visit to the girlfriend of his imprisoned compadre D'Angelo Barksdale (Larry Gilliard Jr.), the tormented Hamlet figure from the show's first season who accepted a 20-year sentence to protect his family. At first, Stringer's visit seems like a charitable attempt to get her to visit D. in jail. "A lot of bad things go on up in a man's head when he's on lockdown, and he need to see his baby-mama," Stringer tells the girlfriend. "Need to see his child, too."

The girlfriend looks unconcerned, and Stringer's tone changes. "There's only one thing he needs to be secure about, and if not, he might start thinking he can't do that time, and then we all got problems. You understand me?" In other words, Stringer and his boss, D'Angelo's uncle Avon Barksdale (Wood Harris), are mainly worried about keeping D'Angelo under control -- as longtime viewers of the show realize, he came awfully close to betraying them to the cops last time around. The bottom line, for Stringer and Avon, is always the bottom line. By the time you figure that out, though, Stringer and the girlfriend are already making out.

But then, "The Wire" is a show that's always a few steps ahead of your expectations. There are so many characters involved that you haven't always watched the dynamic play out between the same few characters a million times before. Simon, a former reporter for the Baltimore Sun, mines his experiences in mapping out a vivid, interconnected world that feels so realistic yet so unfamiliar, it makes most cops-and-mobbers programs look like cartoons by comparison.

The family resemblance between "The Wire" and NBC's late, lamented "Homicide: Life on the Street" -- the other great Baltimore crime series -- is no accident. That show was based on Simon's nonfiction book about Charm City's crimefighters, and while he hasn't recycled any of its major characters, there are a few familiar faces. Erik Todd Dellums, who played sinister drug dealer Luther Mahoney on "Homicide," turns up here as the medical examiner. Callie Thorne, Detective Laura Ballard in the later "Homicide" years, plays McNulty's estranged wife. And Clark Johnson, who as Detective Meldrick Lewis was one of the earlier show's most beloved characters, has directed episodes of "The Wire." (Other "Wire" actors, including Gilliard and Jim True-Frost, made briefer "Homicide" appearances.)

As good as "Homicide" was, though, and as much as it revolutionized '90s TV drama, "The Wire" is a richer and deeper experience. The same concern with depicting race as a lived American experience is there, and the same desire to explore the ragged edge of contemporary masculinity. But "Homicide" only occasionally portrayed its perps and gangsters as fully realized characters, and never went as far in depicting amoral mendacity or flat-out corruption among the cops themselves. Even McNulty, "The Wire's" central protagonist, is a drunk who lives in a dump, sleeps with a woman he doesn't love and occasionally neglects to pick his kids up from school on time. All it takes is one of those "Where's Daddy? Did he forget us?" scenes, and your character is in the doghouse indefinitely.

Simon can push the envelope with his characters because, with all their flaws, they feel as real as the environment they inhabit. While most procedural dramas feature a different case each week, "The Wire" focuses on just one criminal case over the course of 12 episodes, widening its scope to include a multitude of characters and story lines so the net result feels like a novel or a symphony. In each episode, the population of "The Wire" seems to move in harmony like a beehive, hustling, chitchatting, intimidating each other, giving each other shit, cracking eggs into beers and calling it breakfast, avoiding work or looking for work, pulling scams and pulling strings. These aren't good people or bad people, and they're no more charismatic or funny or special than anyone you know. They're believable. The dialogue is strange, snappy, anecdotal and sometimes (often, actually) pretty tough to follow, but it all feels organic.

Even after the great storytelling and amazing performances, there are so many other things to like about this show, it's tough to know where to begin. I like that the female cops on the show have such an understated rapport with their male co-workers. Even on shows as good as "NYPD Blue," the female cops tend to be coy and dolled up. Simon's female characters hold their ground, joke around without being cute and command real respect and friendship from their peers.

I like that a kaleidoscope of different cultures and attitudes is reflected, from union laborers to Greek criminals to Catholic priests to gay drug dealers, but the writers don't sugarcoat or hand-hold -- the characters talk about each other in openly racist terms. Anyone who's familiar with hard-bitten industrial towns of the Northeast, where there are five different Catholic churches, two Jewish temples, a Pentecostal storefront and, these days, a mosque within a few blocks of each other, knows that this is how many immigrants explain their differences. I like that the cops openly dislike and harass each other in a less than good-natured way, that the show is set in Baltimore and not L.A. or New York, that there's so much humor laced into even the heaviest scenes.

Most of all, it's exciting that TV dramas are getting this good. "The Wire" might be too slow-paced and complicated for a lot of viewers -- it's no "24," after all. But it's gratifying to watch this series captain a whole new exploration of the form, leaving the standard conventions of episodic television flailing in its wake. If, after watching this series, a TV drama starts to look like a haiku, it's because "The Wire" is, by comparison, an epic poem. Like "The Odyssey," "The Wire" invites us into a world that's complex yet harmonious, darkly imaginative and, above all, deeply human.