Congress to Big Media: Not so fast

The backlash against the FCC's media consolidation scheme is growing -- and could claim the head of chairman Michael Powell. 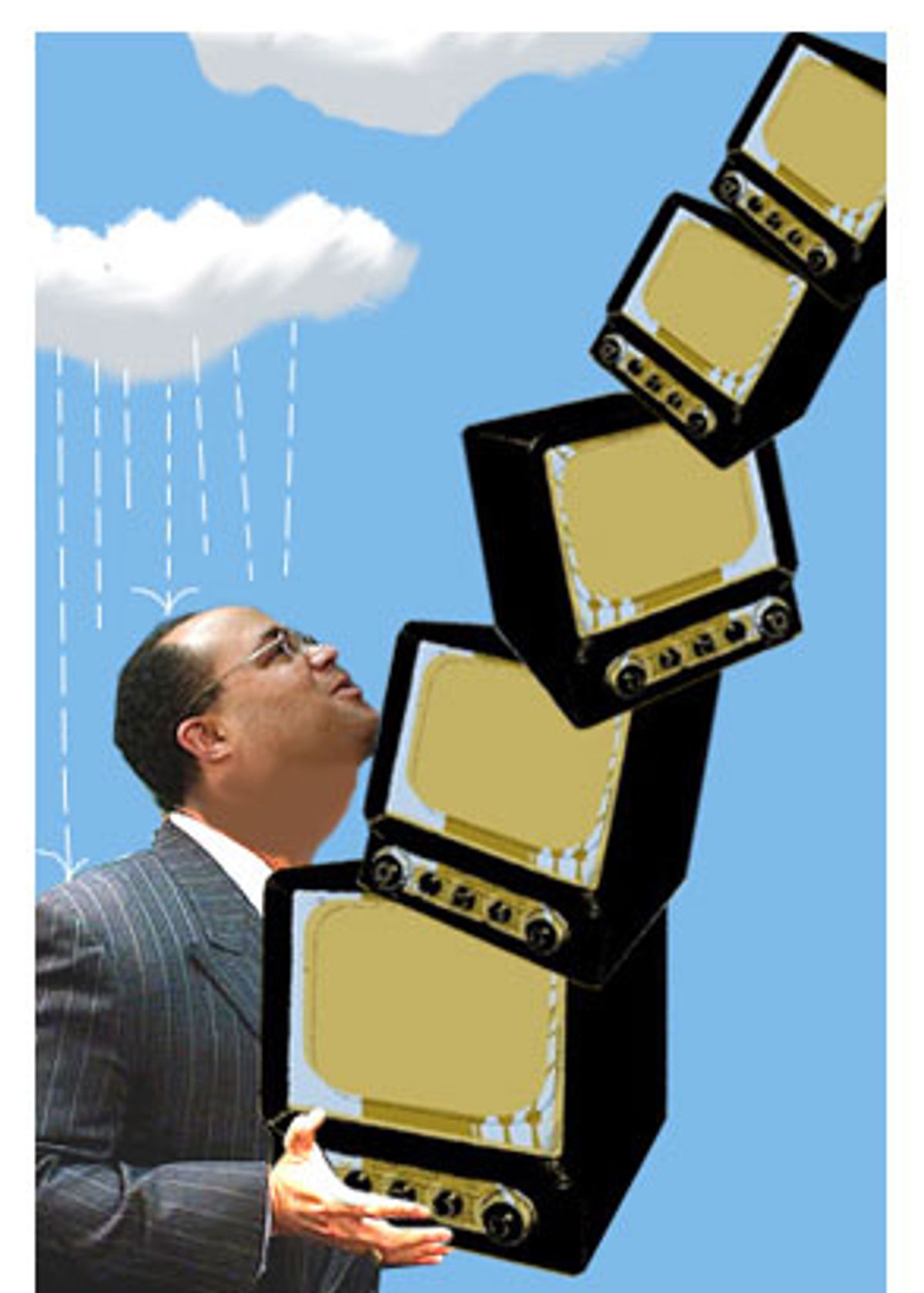 Following the Federal Communications Commission's controversial decision on June 2 to ease media ownership limits, supporters in Congress were so sure they had momentum on their side that Rep. Billy Tauzin, R-La., announced the ongoing debate had become a "soap opera" and that given the chance he intended to "cancel its run."

But instead, there's a cliffhanger: A series of increasingly lopsided, bipartisan congressional votes vowing to undo the FCC's work on media concentration has challenged Tauzin and other supporters. The votes make it increasingly clear that America's largest media companies, such as Viacom/CBS, Disney/ABC, NBC, AOL Time Warner and News Corp./Fox, along with their army of lobbyists, are in danger of losing control of an issue they thought they had put to bed. And if the political momentum continues to mount this summer, there's a growing chance a key portion of the FCC's June 2 decision on media ownership will be overturned by Congress.

That would represent a humiliating setback for FCC chairman Michael Powell and could cause real discomfort for the Bush White House, which has backed Powell's aggressive agenda of deregulation.

Right now, some Democratic candidates smell blood. Sen. John Kerry, D-Mass., quickly signed on with a procedural effort in the Senate to nullify the FCC's vote. And last week, Sen. John Edwards, D-N.C., said Powell's media ownership vote had "betrayed the public trust," adding, "He and his FCC must be stopped."

"I suspect Michael Powell and his supporters are getting nervous," says Mark Fratrik, a vice president at BIA Financial Network, an investment firm specializing in broadcasting and telecommunications. (Time magazine reports this week that Powell may step down as chairman in the fall.)

"June 2 was a bigger deal than a lot of people expected it to be," adds Liz Rose, spokesperson for Consumers Union, a public policy advocacy group that opposes media deregulation.

The new FCC rules allow one media corporation to own up to three television stations, one newspaper, and eight radio stations in the country's largest media markets. They allow TV networks to own local stations that reach, in the aggregate, 45 percent (up from 35 percent) of U.S. television households. And the FCC recommended lifting the ban on newspaper/television cross-ownership in all but the smallest cities.

The surprisingly stiff opposition in Congress, where commercial broadcasters have often enjoyed good working relations with politicians, is just the latest example of how the swelling anti-FCC, anti-media-consolidation movement is reverberating around Capitol Hill. In fact, the story behind the media-consolidation battle is the unprecedented grassroots campaign, joined by both liberals and conservatives, that has clearly sparked action inside the Beltway.

Conservatives are worried about indecent television programming, and how consolidation could further erode standards, while liberals decry how deregulation drives political diversity from the airwaves. During the final days before the FCC's vote, the commission was buried by nearly 800,000 opposition e-mails and postcards from, among others, National Rifle Association members on the right and MoveOn.org readers on the left. Conservative New York Times columnist William Safire now warns the Bush White House that pushing a media-consolidation agenda could come back to haunt it in the upcoming presidential election. Meanwhile, touting the FCC backlash, former President Bill Clinton recently wrote in the New York Daily News, "The opposition is truly a grass-roots movement, and it won't go away. And the voice of the people is beginning to be heard, at least on Capitol Hill."

He may be right. A recent poll by Pew Research Center for the People & the Press found that the more Americans learn about the FCC's move to relax caps on how many newspapers and TV stations a media corporation can own in local markets, the less they like it. Fifty percent of Americans today see further media consolidation as a negative development. Just 10 percent view it positively. And among Americans who have followed the issue closely, the negative percentage balloons to 70.

"We've been filing with the FCC for years," says Rose, of the Consumers Union. "Suddenly it went from us and a handful of other public policy advocacy groups to a much wider base of support."

Not everyone is convinced it will matter. The issue has "received more grassroots response than most people anticipated," concedes Rudy Baca, vice president at the Precursor Group, an investment research firm. But he insists the current last-gasp jockeying represents the "dying embers of the political smoke" that "won't result in political actions to rescind the FCC vote."

Others aren't so sure.

The FCC's decision has touched off a flurry of activity on Capitol Hill, where few politicians are willing to step out front and forcefully defend the FCC's deregulation agenda.

"The most dangerous place to stand is between a politician and a broadcast camera," says Baca at the Precursor Group. "These rules affect politicians' perceived ability to talk to constituencies and get their message out. And a lot of them have had personal experience with TV and newspapers in home markets who didn't support them in a campaign, and they don't want that media group to become more powerful. So it's personal politics."

This week, Sen. John McCain, R-Ariz., chairman of the Commerce Committee, who has examined the issue at length, is holding his third media-consolidation hearing of the year. In the previous two, executives from large broadcasting companies were often grilled by skeptical senators, Democrat and Republican alike, who questioned the wisdom of allowing fewer and fewer conglomerates control more and more media outlets.

A three-pronged attack is being waged on Capitol Hill in an effort to water down the June 2 decision. The first volley came on June 19, when the Republican-controlled Commerce Committee easily passed legislation that would essentially undo the FCC's ownership vote. The swiftness of the bipartisan motion -- and the support from Republican Sens. Conard Burns, R-Mont., Trent Lott, R-Miss., and Kay Bailey Hutchison, R-Texas -- raised eyebrows on Capitol Hill, "The fact it was supported by traditional broadcast friends like those senators signaled that the issues had moved beyond a traditional progressive issue and cut across both parties," says Michael Bracy, director of government relations for the Future of Music Coalition, which opposes media consolidation.

Odds are, though, that despite some Republican support for the bill, the party's top leadership will not allow the bill to come to the Senate floor for full consideration.

Next came an unusual procedural maneuver that would essentially veto the FCC vote. Known as a Senate Joint Resolution under the Congressional Review Act, or CRA, "It would say we, elected members of Congress, do not approve of this rule," say Fratrik. The so-called resolution of disapproval has been successfully used only once before, in 2001 when the new Republican Congress voted to overturn ergonomic rules adopted in the waning days of the Clinton administration.

Thanks to its 35 cosponsors, the CRA can bypass committees and will likely go the Senate floor for 10 hours of debate and an up-or-down vote. However, it's unlikely a similar resolution will be introduced in the House, preventing it from becoming law. And, of course, the White House opposes it.

The procedure is being spearheaded by Sen. Byron Dorgan, D-N.D., as well as Lott, the former Senate majority leader. His participation is unusual since he's normally a staunch ally for network broadcasters who's also breaking ranks with the White House and Republican leadership on the high-profile media issue.

Still, prior to last week, the consensus seemed to be that while senators were making noise about the FCC vote, the revolt remained largely symbolic since members in the House of Representatives were not going to embrace the cause. That all evaporated last week when the House Appropriations Committee, by a wide margin of 40-25, voted to attach an FCC amendment, or rider, to one of the nation's 13 must-pass appropriations bills -- a legislative end-run. If the appropriations bill passes the full Congress with the FCC rider included, the commission would be forbidden from implementing its ownership rules, at the cost of forfeiting its annual budget from Congress. "Suddenly the victories aren't so symbolic anymore," says a former veteran Hill staffer who worked extensively on telecommunication issues. The Senate amendment is a relatively narrow one, though, pertaining only to the number of local television stations networks can own.

On Thursday, a similar rider is expected to be introduced and to pass the Senate Appropriations Committee, where bipartisan opposition to the FCC's vote remains strong. There is one possible hitch: Some senators, such as Hutchison of Texas, want to both rescind the TV cap and wipe out the cross-ownership provision that now allows companies to own TV stations and newspapers in the same market. That sort of wide-ranging amendment could be harder to pass.

The White House has vowed to veto the $38 billion spending bill for the Commerce, Justice and State departments if it contains the FCC amendment. But to do so, Bush would also be vetoing the entire spending bill, which includes must-have money for the FBI, law enforcement and judges.

"If I were the White House I'd be very wary of creating an issue for Democrats, who have very few right now," says one Democratic Hill staffer. "And if he vetoes this, he'll have created a big issue for them."

Instead, Republican leaders in the House, including Tom DeLay, R-Texas, and Commerce Committee chairman Tauzin, have vowed to strip the FCC rider out of the House version, which would save the White House from having to veto the bill. That could be done behind closed doors in conference when House leaders meet with their Senate counterparts to hammer out the final appropriations bill. But sitting across from DeLay and Tauzin in conference will be senate Appropriations Committee chairman Ted Stevens, a strong opponent of media consolidation who is unlikely to agree to yank the FCC rider.

"Nobody's going to let this sleeping dog lie," says Rose at Consumers Union. "It's too big of a deal."