Lying about war is more serious than lying about sex -- which is why the president's free ride is coming to an end. 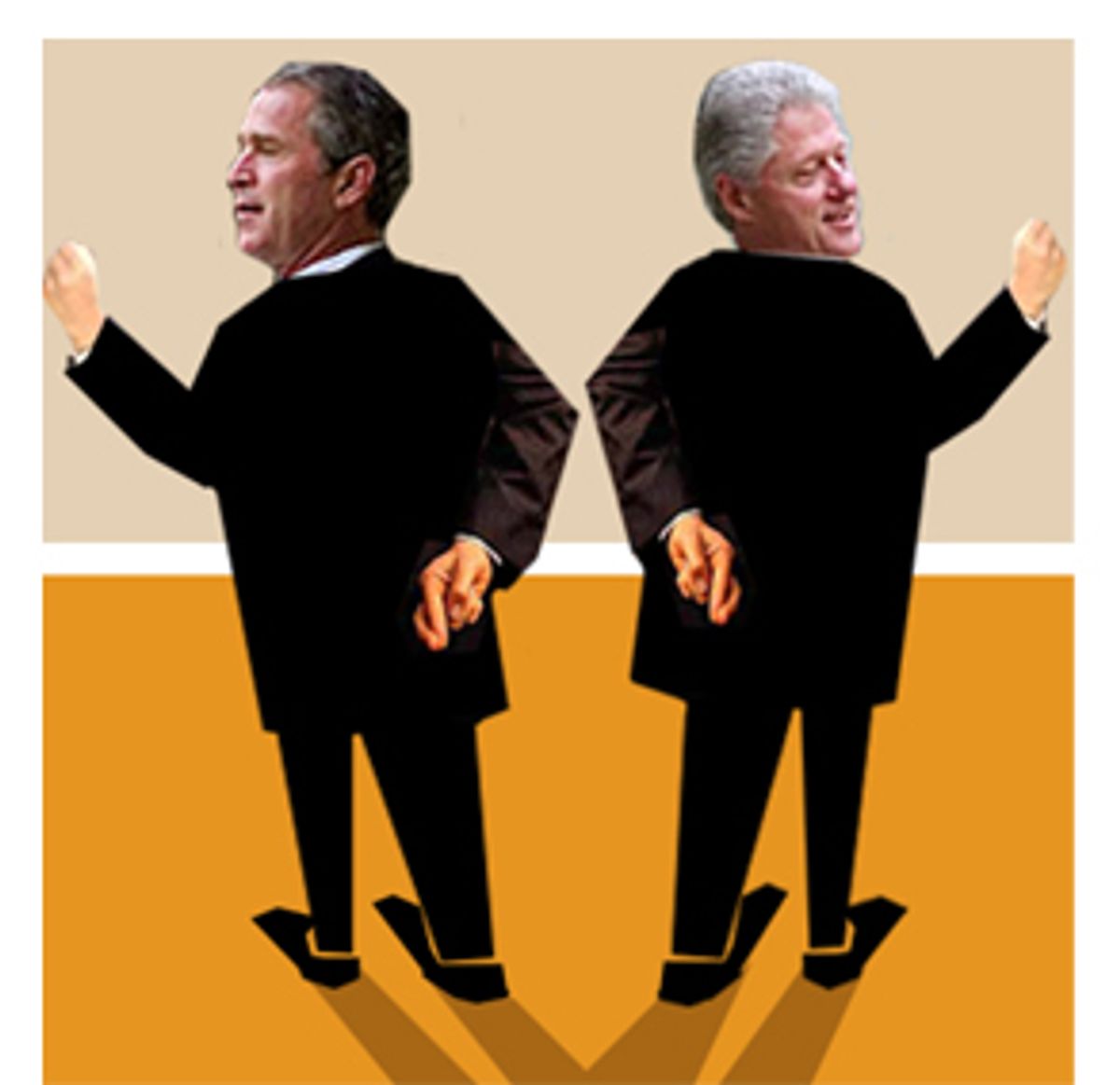 Conservative Republicans like to compare George W. Bush to Ronald Reagan, characterizing him as a masculine Everyman, traditionally conservative and regularly underestimated because of his low-key manner. Liberals like to compare him with his father, who seemed Reagan's tightly wound, Ivy League, career-climbing opposite -- and a one-term president to boot.

Now a different former president is the dominant comparison: Bill Clinton. And that bodes very poorly for our commander in chief.

In the past week, as the White House first reeled from plummeting polls and the Iraq intelligence flap, and then beamed at footage of Uday and Qusay's demise at the Mosul corral, references to Clinton have come both from those taking aim at the president and those buffering his image.

For opponents, Bush's notorious 16 words in his State of the Union address erroneously talking up the Iraqi nuclear threat make up a far more important prevarication than Clinton's 11 ("I did not have sexual relations with that woman, Ms. Lewinsky.") Moreover, the White House's fine parsing of the phrase matches Clinton's floundering over the definitions of "is" and "sexual relations." Consequently, critics argue, the political price that Bush pays for his lie should more or less match what Clinton paid. The stakes, after all, have been wildly disproportionate.

For Bush supporters, Clinton serves as a useful foil. As Republican House Speaker Dennis Hastert, conservative blogger Andrew Sullivan, and others have recently noted, Clinton bombed Iraq and a pharmaceutical factory in the Sudan based on similarly shaky intelligence. Clinton exaggerated Saddam's weapons capabilities, too.

Furthermore, Republicans are starting to point out that Democrats could face a blowback they're all too familiar with. If the Democrats kick Bush's shins over Iraq too long, the public will eventually turn on them, just as it turned on the Republicans during Clinton's impeachment mess. The Democratic base wants a battle, but most moderates are just happy Saddam Hussein is gone.

There are, of course, differences. Clinton's lie was meant to cover up a personal scandal; Bush's partisans can charitably interpret his lie as merely the result of a chain of people in the White House each adding too much rum to the eggnog. Clinton's lie was completely a personal failure; Bush's was a failure of the complete administration.

But the similarities are greater and more important. For one, both lies have stuck because of their backdrops. If the United States weren't losing a soldier a day and pouring a billion dollars a week into a zone of increasing chaos, no one would remember to question Bush's months-old prevarications. If Clinton hadn't been facing persistent accusations about his womanizing, no one might have known about his trysts with the intern. The Niger fib fit into a pattern of deception about intelligence and Saddam's weapons capacity, just as Clinton's Lewinsky dalliance fit into a pattern of questions about his personal affairs.

The fundamental similarity is that both liars were called on the carpet. And for Bush, that will likely mean an end to what has been an impressive free ride.

In his first two years, Bush lied and exaggerated repeatedly. He lied about the number of stem cell lines available, the benefits for poor people of his tax cuts, his commitment to carbon dioxide emissions reductions, the cost of the war, and much more. Until now, Bush has escaped basically scot-free from each fib.

He successfully tagged Al Gore as a liar during the presidential campaign and maintained a pure image ever since. According to Clinton's press secretary, Mike McCurry: "The press had high expectations of Clinton, which he did not succeed in meeting, and they had low expectations of Bush, which he surpassed. Plus, they like him more as a guy."

The last two weeks could irrevocably tarnish Bush and his administration. Even if vindicated, his prevarications will become part of the basic narrative about Bush that reporters and the public pull up. As with Clinton, every action will be scrutinized for cynicism, every statement scrutinized for a shading of the truth.

Just last week, Undersecretary of State John Bolton pulled out of congressional testimony over Syria that seemed likely to result in more exaggerations and then more backtracking. This week, the president has come under fire for pledging his support during the State of the Union to AmeriCorps and then remaining quiet as House Republicans took their knives to it. Bush would have cruised through the AmeriCorps contradiction with a slight stutter-step a few months ago. But with questions of the president's integrity on the front pages, he's going to have to answer for his earlier claims.

Even worse for Bush, now that his job-approval ratings are sinking, the Democratic candidates suddenly seem a lot more serious and deserving of respectful coverage and attention. They aren't just running for the honor of keeling over before the crafty and well-funded Karl Rove. They are actually running for president.

Two polls help illustrate Bush's predicament. The first measures Bush's overall favorability ratings. They started out very high and then fell slowly but steadily during the first eight months after Bush's inaugural. After Sept. 11, they shot up. Gradually, they started drooping before bouncing back up when we invaded Iraq. Now they are drooping again and will probably only perk up slightly with Bush putting Uday's scalp on the wall.

The second interesting piece of polling data comes from Americans asked whether they would vote for Bush or a generic Democratic candidate in 2004. Bush's consistently unimpressive numbers on this measure have always lagged behind his general approval figures. The explanation, says pollster Jeremy Rosner, of Greenberg Quinlan Rosner Research, is that approval ratings look at how good a job one did in the past -- not who should lead in the future. As of today, Bush is basically tied with a generic Democratic candidate.

In other words, when the country is not at war or under attack, this president is not a very popular guy. Worse, much of his popularity stems from what he did in the past, not on whether people think he'll do a good job leading in the future.

The criticism of Bush had slowly died down by the beginning of this week, even when Stephen Hadley, the deputy national security advisor, admitted on Tuesday that he had learned of the CIA's concerns over uranium back in the fall. Moreover, the Democrats don't control either house of Congress and thus can't stage congressional investigations, eliminating what was the Republicans' favorite method of going after Clinton.

But to stabilize his popularity and ultimately win the coming election, Bush still needs something that he can talk about or do. His popularity goes up during combat, but starting another war -- with, say, previous candidates like Syria or Iran -- seems highly unlikely unless hard and fast evidence emerges that either poses an imminent threat. Moreover, Bush's checks bounce when he moves to the economy, since jobs are down and the deficit is soaring, in no small part because of the administration's tax cuts. Furthermore, on almost all domestic issues, now including taxes, the public trusts Democrats more to do the right thing than it trusts Republicans.

Bush is similarly stymied at attacking his opposition. His first option is to paint all Democrats as antiwar in Iraq and implicitly in support of a maniac whose brutality becomes clearer with each mass grave found. This strategy will have particular currency if the situation in Baghdad improves, the bloodletting stops, and troops stop telling reporters that they want to go home. Many Democrats agree that Bush can get traction here. "Most Americans aren't lawyers or arms inspectors, but they do know an enemy when they see one," says Will Marshall, president of the Progressive Policy Institute, a centrist Democratic group.

The problem for Bush is that almost all of the top-tier presidential candidates were pro-war. The big difference between their position and the White House's was that the Democrats wanted to act multilaterally and with the support of the United Nations. That position looks eminently reasonable now, with Americans making up nearly all of the coalition forces patrolling Iraq and with the realization that Saddam almost certainly did not pose an imminent threat to this country.

This is a clear distinction. If Bush is held to a high sincerity standard, he and his allies will gain little ground by trying to obfuscate it, particularly if the Democrats can refrain from appearing to enjoy themselves at the nation's expense -- a mistake the Republican impeachment leaders made -- and rooting for further bedlam in Baghdad. The jury's still out on whether Bush's position was wiser than Howard Dean's total opposition to war. But it's increasingly hard to argue that Bush's March position -- shoot immediately and do it alone -- was wiser than most of the other Democrats'.

Bush could also try to tie everything he does to his shining moment combating al-Qaida. This is already a clear Republican strategy, as they make plans for their 2004 convention in New York City as close to the three-year anniversary of the attacks as possible. It's also clearly on their talking points. This Sunday on "Meet the Press," Tim Russert asked House Speaker Dennis Hastert, "How troubled are you by the situation in Iraq?"

Hastert responded: "Well, Tim, I think you have to look at the big picture. You know, when 9/11 happened, almost two years ago now, we saw two planes go into the World Trade Tower, we saw a plane go in the Pentagon. I was looking out my window in the Capitol and saw this smoke go across the Mall."

Hastert went on for a while until Russert cut him off by bluntly asking whether Saddam was connected to Sept. 11.

As reporters know, and Hastert conceded, al-Qaida and Saddam aren't linked in more than superficial ways. Plus, when it comes to actually combating the threats of al-Qaida, Democrats have more strongly supported homeland security funding than Bush. Again, Bush's principal chance to make the charge stick of Democratic softness here is to fudge the truth or at least walk in circles around it. A plausible strategy last winter, it's unlikely to work in the post-yellowcake era.

"George Bush is a nice man who loves his family and goes to church every week, but that isn't the main issue anymore," says Democratic strategist Anita Dunn.

Like Clinton, Bush will mainly gain points now by governing well. And that, to date, is one area where the president has generally come up short.

Nicholas Thompson is a fellow with the New America Foundation. He lives in New York.