This sequel is better than its predecessor, which isn't saying much. No matter -- the dazzlingly talented Angelina Jolie makes it a thrill ride worth taking. 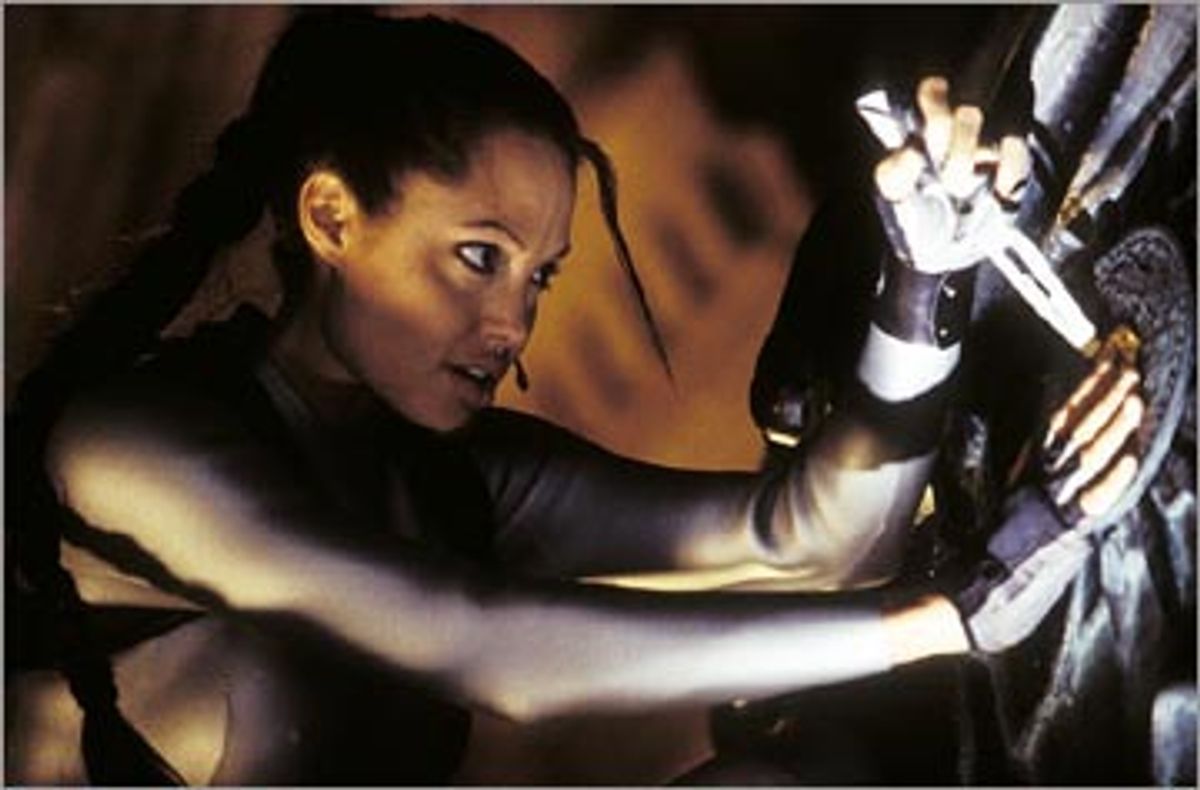 She's got the same impeccable grooming, the same stylish but subdued wardrobe. She's got the same posh upper-crust accent, the same habit of bouncing from one exotic locale to the next, and of never settling down with just one lover. All that's missing, in fact, is the shaken-not-stirred vodka martini and those shushed Scottish S's. The evidence is clear: Angelina Jolie is the best Bond since Sean Connery (or, at the very latest, since the early years of Roger Moore).

I'm not going to try to sell anybody on the idea that "Lara Croft Tomb Raider: The Cradle of Life" (can something be done to stop the ever-spreading horizontal expansion of movie titles?) is exactly a good movie. Like most of this summer's action-adventure mediocrities, it will do decent business for a few weeks and then fade from memory, gradually melting into that part of your mind where the 297 other movies you've seen that feature an ass-kicking protagonist and a sneering villain with schemes of world domination are stored.

But this flick is nonetheless a significant improvement on Simon West's incoherent 2001 "Lara Croft: Tomb Raider," which was so badly made you could hardly tell where in the world Lara was supposed to be dealing out her hellacious babe-fu, and had to rely on displaying Jolie's physical, erm, assets to maintain viewer interest. Jan de Bont (of "Speed" and "Twister") is nobody's idea of a subtle filmmaker, but he's a competent action director with a natural sense of pacing and a terrific eye. (He was Paul Verhoeven's cinematographer for more than 20 years.)

Most important, de Bont understands that you don't have to descend to T&A softcore to make Jolie look sexy -- she can manage that by walking into a room. It isn't just that there's no nudity in "The Cradle of Life," or that Lara's outfits, although undeniably form-fitting, seem more functional and less like figments of adolescent male fantasy than in the first movie. Director and star understand here that Jolie's ample sex appeal derives from watching her in motion; long, sleek and muscular, she's a feline predator, closer in type to the young Connery or maybe even Steve McQueen than she is to a cartoon sexpot like Brigitte Bardot or Pamela Anderson. (Diana Rigg as Mrs. Peel is her obvious female ancestor, although I also see traces of Lauren Bacall and Marlene Dietrich.)

As my colleague Charles Taylor wrote in reviewing the first Lara Croft film, Jolie hasn't yet found the vehicle for her extraordinary, unclassifiable talent, and this isn't it either. But de Bont keeps the episodic, video-game plot -- with its jumble of elements from "Raiders of the Lost Ark," "The Lord of the Rings" and virtually any other fantasy adventure you can think of, back to Edgar Rice Burroughs and H. Rider Haggard -- ticking along and allows her to dominate the screen with those long limbs and that luminous smile and the impressive architecture of that face. It's enough to convince me, at least, that Jolie still has a future as a major movie actress, and isn't simply going to become a tabloid figure more famous for her personal eccentricities than her screen performances.

So let's see: In the first movie Lara the tomb-raiding English aristocrat-cum-archaeologist had to save the world from some bad guys who were going to acquire a sacred, ancient gizmo that would give them tremendous power, right? Well, wonder of wonders, but the same thing happens again. Now, I'm no expert, but my vague impression is that real, semireputable archaeologists these days don't go around pillaging all the cool stuff from newly discovered sites of immense cultural importance and then trashing them. But, hey, this is a movie based on a video game, not a special on the Discovery network -- and anyway, that is roughly what real archaeologists did a generation or two back.

This time we start out with an earthquake off the Greek island of Santorini, where Lara is burning up the waves on a Jet Ski while searching for the lost Lunar Temple of Alexander the Great. Old Alex's treasure trove includes a holographic glowing orb that somehow will provide a map to a still greater treasure, the original Pandora's box, in which is contained the secret of the origins of life on earth, along with an unstoppable plague that can end it. (Opening the box, at least according to legend, has tended to cause problems.) How do we know all this? Because Lara has read Greek history. No, really -- she's got a book on her shelf at Croft Manor in Buckinghamshire, and it's called "Greek History."

"It's the greatest discovery since the Pyramids!" says Lara, and we can tell she's excited in her silver mesh wet suit (or maybe it's just that the water off Santorini is a little cold). But soon enough Lara's Greek support team are all dead (a fact she never quite seems to register) and the orb that leads to the map that leads to the box is in the hands of some nefarious Chinese bandits. They hope to sell it to a mad germ-warfare scientist named Jonathan Reiss (Ciarán Hinds), the kind of guy who enjoys poisoning one friend in front of some other friends and saying, oleaginously, as the dude coughs and sputters, "That, gentlemen, is the sound of a traitor dying."

Lara requires a sidekick for this mission and the only guy who will do, evidently, is a Scottish ne'er-do-well named Teddy Sheridan (Gerard Butler) who is currently pumping iron in a filthy Kazakh prison. (An upper-class twit from MI-6 helpfully exclaims: "Teddy Sheridan -- the former commander with the Royal Marines turned mercenary and traitor!") Butler is a bemuscled charmer with a mischievous twinkle and a Glaswegian burr who may provide this series with a dash of Harrison Ford energy that could keep it afloat for a while; you can well believe that Lara and Teddy have some unfinished business of a nonarchaeological, nonparamilitary nature.

That's about all you need to know: Pretty soon Lara and Teddy are pointlessly racing motorbikes on the back roads of rural China, rappelling down cliff faces upside down, jumping off skyscrapers wearing bat wings and disturbing Hong Kong families as they watch "SpongeBob SquarePants." De Bont's best set piece here is probably the bewildering three-way Shanghai street fight involving the bandits, Reiss and his henchmen and Lara and Teddy. There's a bioweapons lab "hidden" in a shopping mall that turns out, accidentally, to be a really funny joke right now. There are a couple of computer-animated sharks and some extracool monsters I won't spoil for you toward the end, when the quest leads through an unhinged fantasy landscape in central Africa toward a tinfoil cave where the laws of gravity come unstuck and Pandora's box sits bubbling in a pool of black goo.

Is the devilish Terry trustworthy? Will Lara open the deadly box? There aren't any tremendous surprises in "The Cradle of Life"; many other movies have explored this terrain and several have done it better. But this is a highly enjoyable summer thrill ride with an action heroine who likes to be on top, literally and figuratively. Girls as well as boys can look at her up there, and admire.