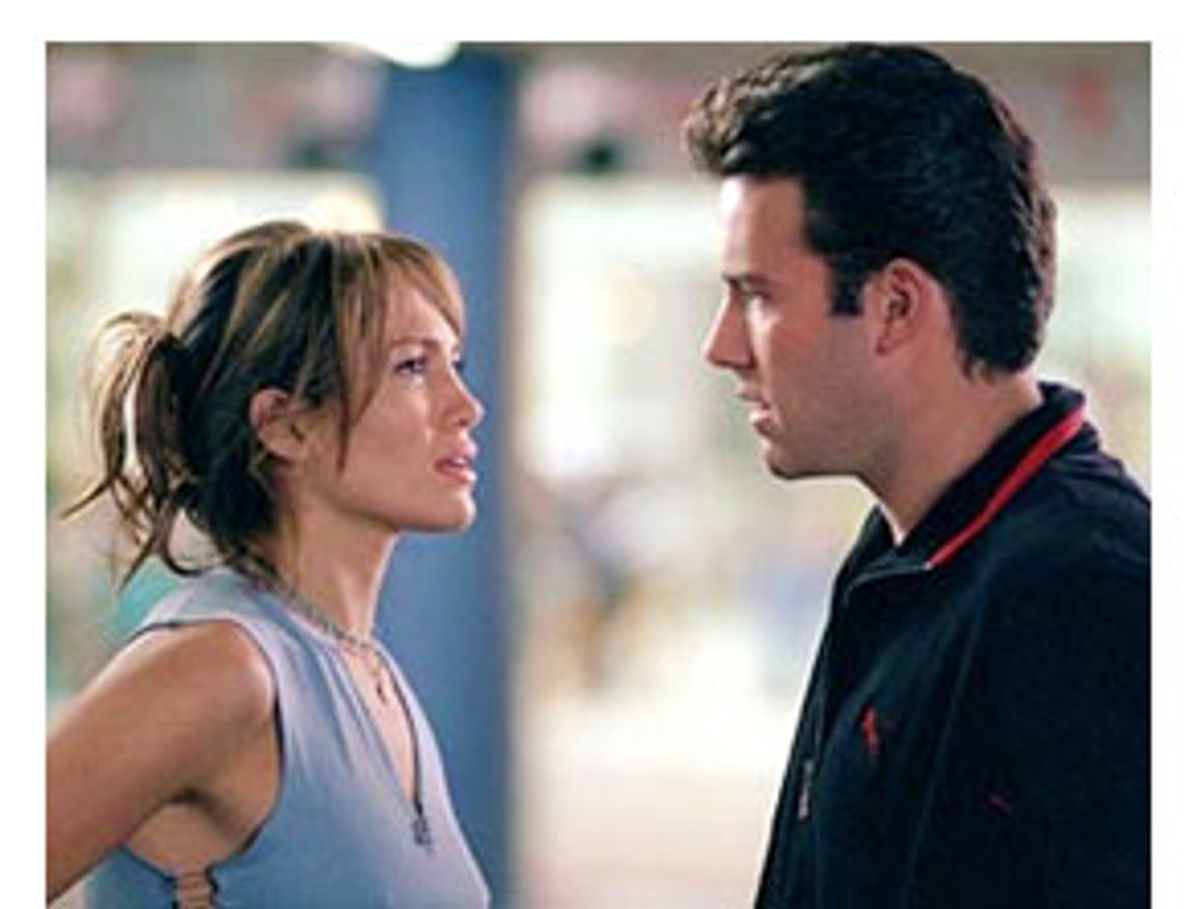 As is often the case with movies that have poisonous advance word of mouth, "Gigli" turns out to be merely bad -- not a train wreck, not the crime against humanity it's been rumored to be. That, and the fact that it's fashionable to hate Ben Affleck and Jennifer Lopez right now, will probably do nothing to discourage the predictable pig pile of critics trying to outdo each other by seeing who can be the most dismissive or scathing. After all, nobody wants to look like the class nerd.

More often than not, buzz is something created by the studio, and there are too many -- you should pardon the expression -- entertainment journalists and critics who report that buzz as if it's fact. Needless to say, critics who believe anything a studio tells them in advance are damn fools. I don't know how many times I've heard critics say, "It must be bad, the studio isn't screening it" as if marketability were a mark of quality.

I suspect that what's made Columbia nervous about the movie isn't that it's bad -- studios release far worse movies with no compunction -- but that it isn't a formula picture. There are no car chases or explosions, no boffo jokes that can become catchphrases before the movie opens, and only one gunshot. The ads, showing Affleck and J.Lo in a clinch, don't hint that she plays a lesbian. "Gigli" is a character-driven piece, pitched awkwardly between comedy and drama.

Affleck is Gigli, a mob enforcer who's far too tenderhearted to bring his assignments the level of brutality desired by his boss (played by Lenny Venito -- to say he gives a one-note performance would be generous). A federal prosecutor is threatening to make trouble, so Gigli's boss tells him to kidnap the prosecutor's teenage autistic brother Brian (Justin Bartha) for leverage. Gigli's boss doesn't trust him not to screw up, so he sends another contractor named Ricki (Lopez) to keep an eye on things. She flummoxes Gigli. Not only does she show more patience and kindness toward Brian's quirks, but her quiet way of dealing with things makes hash of Gigli's macho bluster.

The lead performances work the same way. Affleck bellows his way through dem, dese, and dose-isms and Lopez, who underplays nicely, consistently shows him up with her quiet, confident line readings. She's charming here, and I loved watching her. The tension between Gigli and Ricki comes from the fact that he can't believe this gorgeous woman is immune to his swaggering. It's fun to watch Lopez disarm Affleck. Her best scene comes when, while doing yoga, she explains to him that it's the vagina and not the penis that's the real power in the world. One thing the writer-director Martin Brest can take pride in is that "Gigli" has a sexual openness uncommon in Hollywood movies. There's no shame, no big shock moment when, during that speech, Lopez refers to "my pussy." And when they do go to bed, it's not presented as if Ricki is "cured" of her lesbianism. Sex is sex, the movie is saying, and the reality of sex is that sometimes we find ourselves falling into bed with the least likely partner. And besides, she seduces him.

There's a startling moment at the beginning of that seduction when Ricki asks Gigli if he thinks his nails need clipping. The movie turns it into a bit about discerning a man's masculinity from how he looks at his nails. But we all know what it means when a woman asks a man she's about to go to bed with if his nails need clipping. It's the sort of small, recognizable sexual detail the movies routinely shy away from. (And while the movie's treatment of the autistic Brian is often icky, it doesn't pretend that he doesn't have sexual feelings either. At times Bartha's performance is too much Rainman Jr. At other times, he's unpredictably funny.)

The problem with "Gigli" -- and it isn't a small one -- is that Brest never finds an appropriate tone or pace. He appears to be trying for something like a European sense of melancholy here and instead the movie just feels confused (the black comic moments are jarring, though I did laugh at a shot of a fish happily chowing down on a bit of brain matter that's found its way into his tank). Christopher Walken shows up for a few minutes of patented weirdness, and so does Al Pacino, whose five-minute performance may be the worst acting he's ever done. Predictably, the movie falls into sap, and it takes forever for Brest to bring things to a conclusion. He gets a few good comic moments. Brian likes to be read to at bedtime and Gigli, without a book in his house, is reduced to reading the labels of Tabasco sauce and toilet paper to soothe the kid. And there's a funny moment when a gruesome sound inspires Brian to use it as a backbeat to rap Sir Mix-a-Lot's "Baby Got Back."

Considering what Hollywood has put out this summer without any shame, the likes of "Hulk" and "Bad Boys II," "Gigli" is a minor failure, nothing to celebrate but nothing to be ashamed of. Unless a movie that tries -- however badly -- to concentrate on character instead of spectacle has come to be considered a crime.