Confessions of a memoirist

Acclaimed writer Vivian Gornick admits fudging the facts to a roomful of journalists. Did she exercise creative license -- or betray her readers? 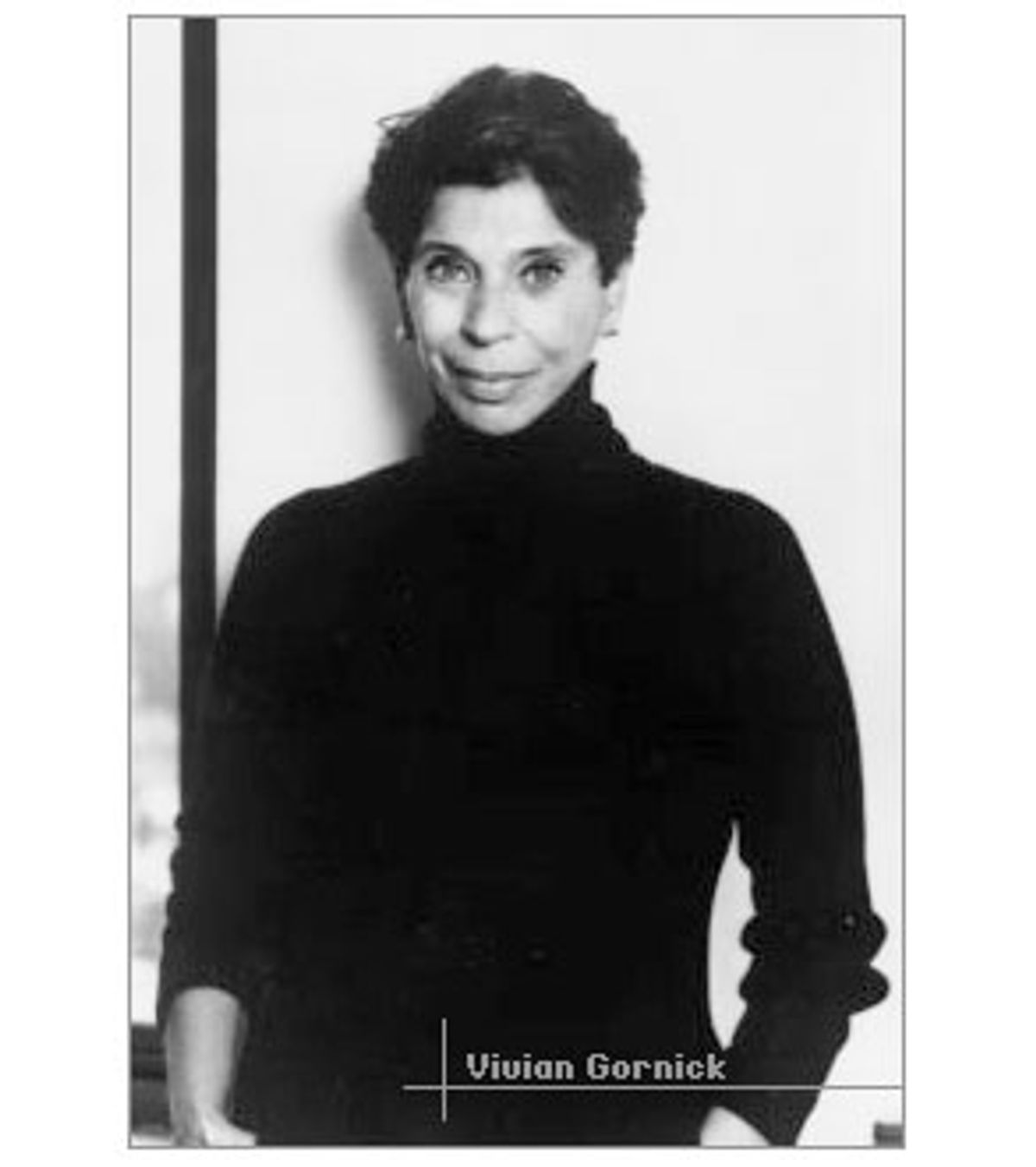 Like many of the people attending a two-week seminar here at Goucher College, I am pursuing my MFA in creative nonfiction at the school because some of the best writers in the East Coast sit on its faculty, and because a number of notable writers come to speak to the students. Writers like Vivian Gornick.

Gornick, 68, is considered by many to be the grande dame of memoir and personal narrative. She wrote for the Village Voice from 1969 to 1977 and covered, among other events, Jane Fonda's controversial Fuck the Army tour of Asia during the Vietnam War.

She has also authored seven books, including "The Situation and the Story: The Art of Personal Narrative," published by Farrar, Straus and Giroux in 1996. It is a book widely respected by teachers and students of the memoir genre, in part, because Gornick herself is a respected memoirist. Her chronicle of her relationship to her mother, "Fierce Attachments," made Gornick a literary star when it appeared in 1987. At the time, the New York Times hailed Gornick's memoir as a "fine, unflinchingly honest book." In the past few years, Gornick's critical essays and book reviews have appeared in a number of venues, from the Times to Salon.

On July 28, Gornick spoke to about 50 of the Goucher students and staff who gathered to hear her for about an hour, then ended with a few moving and beautifully written excerpts from "Fierce Attachments," a memoir structured around Gornick's walks with her mother in New York City. Then she answered questions from the audience -- and shocked her listeners by describing the liberties she'd taken with the truth. Her revelations transformed the session into a debate seminar about truth vs. creative license in the post-Jayson Blair era.

Gornick admitted she had "composed" some of the walks and conversations with her mother in the memoir, and had also invented a scene that involved a street person and her mother. She said this matter-of-factly, and said she considered memoir to be in the genre of "personal narrative," not journalism.

But just a few minutes later, Gornick said she'd also used composite characters for some of her pieces that ran in the Village Voice. She gave two examples -- conversations at a dinner party in New York, and a man who lived in a high rise and robbed stores at night.

Gornick was quickly grilled by her audience. It was surely a culture clash: a sophisticated New York memoirist facing off against a crowd that included highly regarded journalists. But it left some students scratching their heads afterward, trying to understand when fabricated information is acceptable in nonfiction -- and when does it make you Jayson Blair?

During the questioning, I glanced over at Patsy Sims, the director of the Goucher program, a former newspaper reporter who has authored four nonfiction books. Sims looked miserable. She would later tell me: "I was stunned. I had no idea Gornick had taken these liberties ... I felt I had 43 students with whom we try to instill the importance of not making things up ... I also knew Gornick was uncomfortable and I felt badly for anything she might be feeling."

Tom French, a Pulitzer Prize winner from the St. Petersburg Times and a member of the Goucher MFA faculty, politely asked Gornick how she would feel if the tables had been turned, if Gornick's mother had invented stories about her daughter and had written about them as though they were true.

The question, Gornick replied, was "unanswerable."

Another member of the audience asked Gornick whether she had alerted readers to the inventions of certain scenes and dialogue with, say, a prefatory note?

"No," she replied, her readers were "willfully ignorant."

When I spoke with Gornick by phone a few days after the seminar, she denied saying that she had ever "made up" anything in her memoir, although certain "conversations and circumstances are composed." She believes with all her heart that her memoir is honest. She once wrote in the New York Times that the narrator in "Fierce Attachments" is "me and at the same time not me," a "nonfiction persona" who could "tell the truth as I could not."

I phoned Don Forst, editor in chief of the Village Voice, and asked him what he thought of compound characters in newspaper stories. Forst signed on at the Village Voice in 1996, long after Gornick had moved on. But he told me Gornick "wouldn't do that under my editorship. If she did it once that would be the end of it ... I don't go for it."

Many masterpieces of "creative nonfiction" have been criticized for sacrificing truth for a good read, and they include Norman Mailer's "Executioner's Song," Truman Capote's "In Cold Blood" and Joseph Mitchell's "Old Mr. Flood."

But the memoir, in particular, seems to be the most factually fudged genre of nonfiction writing.

In 2001, Jennifer Lauck's wildly successful childhood memoir, "Blackbird," came under fire from her own family; her stepbrother chronicled 100 errors he said he found in the book. Many modern memoirists hedge their bets; Dave Eggers deliberately called his book "A Heartbreaking Work of Staggering Genius" fiction, though it closely mirrored his own life. Rick Marin, whose "Cad" came out earlier this year, has blithely told reporters it is a "lightly fictionalized memoir." And Augusten Burroughs included the following note in his second memoir, "Dry," which came out in June: "This memoir is based on my experiences over a 10-year period. Names have been changed, characters combined and events compressed. Certain episodes are imaginative re-creation, and those episodes are not intended to portray actual events." That prompted the Washington Post's Jonathan Yardley to fume: "There's a word for that: fiction."

In response, Burroughs told Salon, "It's weird to me that the old man at the Washington Post would think the disclaimer in the beginning of 'Dry' somehow means I made everything up. What I did was make up the beer commercial I talk about in the book and merge a couple of ad people together into one. Ad people are all pretty similar, so who cares? Because I changed these small details, I had to put that disclaimer at the front of the book, to make my publisher comfortable with the fact that these things were fabricated." Burroughs added, "If I were going to make up a story, I certainly wouldn't mine such tired, overworked territory as 'recovery.'"

Fabrications happen "all the time" in memoirs, according to Charles McGrath, the editor of the New York Times Book Review. McGrath says that in an ideal world, journalistic standards would apply to memoirs, though they frequently don't. A memoir ought to be as true as it can possibly be and if it is not the reader should be alerted to that fact.

Walt Harrington, a former Washington Post writer who has written five books, including a recently published memoir, "The Everlasting Stream: A True Story of Rabbits, Guns, Friendship and Family," is a member of the Goucher MFA faculty. He had attended the Goucher talk, and had questioned Gornick intensely about her ethics. He still seemed frustrated afterward.

Gornick, he said, is a "great writer and a great thinker" whose standard is "acceptable among many people writing nonfiction." Wouldn't her "willfully ignorant" readers feel tricked when they discovered parts of a work they thought was true was, in fact, not? Harrington said he once spoke with an editor in a prominent publishing house about the shape his future memoir might take. The editor had wanted Harrington to make the piece more "story-like." "He wanted me to trust my memory," Harrington said, "which is to me a code for 'You can make it up as long as you don't tell anybody.'"

Harrington chose a different publishing house, the Atlantic Monthly Press, and said he purposefully put "True Story" in the subtitle.

Gornick, meanwhile, chooses to leaves it up to the reader to decide. "I cannot defend it, " she said of her writing. "The writing has to defend itself."