The poseur in chief

Democrats can't win in '04 by fighting Bush on the issues alone. They have to convince Americans that their warrior president is a phony in a flyboy suit. 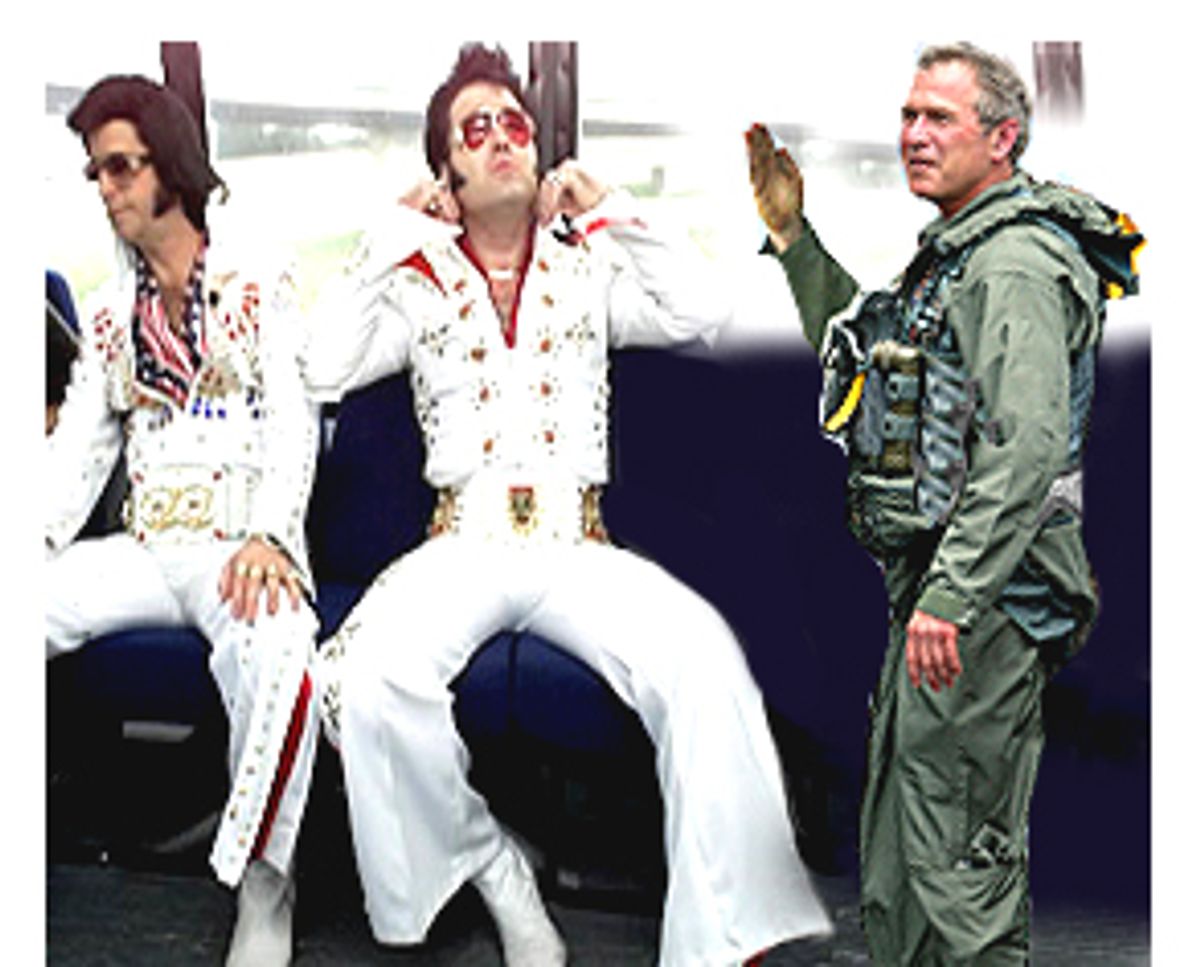 Rep. Dick Gephardt made his best and perhaps his only significant contribution to defeating George Bush in 2004 last month, when he derided the president's "bring 'em on" challenge to Iraqi attacks on American forces. "Enough of the phony macho rhetoric," Gephardt shot back. The Missouri Democrat's line was more than just padded flight-suit envy. His jibe hints at the strategy that could put a Democrat back in the White House: convincing Americans that Bush is a phony.

The Democrats can only win if they succeed in undermining the president's greatest strength: his credibility as a decisive and authentic wartime leader. The problem is that in such uncertain times many Americans instinctively can't and don't want to believe that George Bush is screwing them. Until the Democrats change how voters view Bush the man, and then link that to a broader critique of his administration, the Democrats will have a hard time punching through.

In 2000, the Bush machine played skillful personality politics to successfully paint Al Gore as inauthenthic, a poser and a "chronic exaggerator." Despite Bush's far more serious exaggerations on Iraq and his tax cuts, he is still riding high on key measures of political character such as trustworthiness (70 percent of Americans say he is trustworthy), personal strength and, spectacularly, as someone who cares about the concerns of ordinary Americans. Even Bush's State of the Union Iraq/uranium lie probably won't much change this, when all the talk about who's to blame is focused on supporting characters and not the man himself.

The core problem with the current Democratic strategy is that a piecemeal, issue-by-issue attack on the policies of the administration will not resonate while Bush retains the esteem and even admiration of many ordinary Americans. And a contest based on issues will only get harder as Bush moves from shoring up his base to moderating his image in the lead-up to next fall. Expect the policy lines to blur amid a renewed focus on domestic issues and a revival of the language and imagery of compassionate conservatism.

The Democrats' greatest danger is to run an issues-based campaign that becomes a ritualized liberal/conservative slanging match. Progressives who are flabbergasted at the audacity of Bush's agenda seem to think that simply communicating Bush's policy failures is enough. But this approach will play straight into Karl Rove's chubby hands and trap Democrats in the defensive, dithering posture that has defined them since the Bush presidency began.

So no matter how bad Bush's actual record may be, Democrats simply can't count on fighting the upcoming election on substantive policy grounds alone.

The question is what communications strategy will wear down the personal appeal of Bush as effectively as the "weak and indecisive" tag slapped on Jimmy Carter, and the "out of touch" tag on Bush's father. What characterization can the Democrats use to undermine Bush's image and his greatest perceived strengths? The one label that will stick and could work to undermine the positive personal perceptions of the president comes from Gephardt's line last week: George Bush is a phony. It works, because it has a ring of truth about it -- on everything from Iraq, to the economy, to tax cuts, to Bush's character and personal history.

The Bush-is-a-phony message can work because it starts where the average voter already is -- with a positive view of Bush. It recognizes that Bush may very well look tough, decisive, patriotic, responsible and compassionate. But it asks those voters to look beyond the image.

Sound nasty? It is. But expect the same from Republicans, whomever the Democrats nominate. And this time around, the Democrats clearly cannot run on the perception that Bush is not sufficiently experienced, bright or interested in the job. Those issues have been effectively neutralized as Americans have become used to seeing Bush as their commander in chief at a time of deep insecurity and fear.

Accusing Bush of incompetence will sometimes work -- it's getting airtime on the Iraq issue now. But the incompetence tag is both less damaging and less resonant for the public given the administration's skills in regulating what the public sees of Bush -- with those twice-a-year press conferences and endlessly flattering photo-ops. Besides, the White House will arrange an endless lineup of fall guys to prevent responsibility from reaching the president. CIA director George Tenet was only the first to take a hit. (On Wednesday, Bush finally took responsibility for the State of the Union fib, but only after weeks of his administration pointing the finger of blame at everybody but the president.)

And the currently favored tactic of branding Bush as an elitist or a warrior for the rich -- while an important part of any critique of the president -- won't be enough, because it will trap Democrats back into a stale debate that Republicans will effortlessly -- and hypocritically -- dismiss as "class warfare."

Bush's image as a regular guy has helped to obscure the fact that he is an insider with close connections to big business and a natural interest in protecting them. To turn this around, Democrats can use the "phony" message as a nexus to explain the contradiction. How can the everyman who stumbles on his words and has a traveling pillow be the same fellow whose tax cuts leave nothing to poor families with kids? How can a champion of personal responsibility and born-again asceticism engineer such unsustainable budget deficits? How can a leader who claims to be the first White House CEO engage in the kind of shoddy handouts to corporate backers in Iraq that shareholders would never tolerate in a business leader? How can a president so determined to wage the war on terrorism be the same president who starves state and local authorities of critical funds for homeland security? How can the commander in chief so concerned about terrorists getting hold of nuclear weapons be the same leader who leaves Iraqi nuclear sites unattended for weeks?

These contradictions make much more sense when seen through the prism of Bush's utter phoniness. It's stunning that when Bush was making his controversial "Top Gun" flight suit appearance, no major Democrat noted the president's shoddy record in the Texas Air National Guard, where he served his country in the "Champagne" unit with Texas boys of privilege, while his poor neighbors went to Vietnam -- and still had several months of service unaccounted for. Instead Democrats complained about Bush's using public resources for the stunt, which most Americans, proud of the supposed quick victory in Iraq, couldn't care less about.

More recently, Senate Majority Leader Tom Daschle blew it the day the White House conceded that Bush used forged evidence in his State of the Union Address. His lame response -- "it ought to be the subject of careful scrutiny as well as some hearings and some research" -- failed to put this rare admission of the administration's willingness to fabricate and exaggerate in the context of a broader pattern of behavior by Bush himself. It is one thing for Bush's cronies, or George Tenet, or even his speechwriters to look duplicitous. But no leading Democrat seems willing to make the same claim against the president. Republicans hardly showed the same deference towards Bill Clinton.

The message that Bush is a phony needs to be hammered issue after issue, month after month. We'll know this is working when people start using the term in the checkout queues, the gas pumps, the classrooms, the malls, the churches and living rooms across America. The message has to be so simple that Bush's own appearances and announcements, instead of countering the Democrats' attacks, actually underscore them. It has to pick up on areas where voters are already uneasy, like Bush's handling of the corporate fraud scandals and his environmental record.

A shift to the "phony" campaign will produce a visceral response from the Bush machine. Democrats will be accused of desperate personal attacks, going negative, and undermining the standing of the president at a time of crisis. No doubt, the eventual nominee will be subject to the same kind of personally targeted criticisms. It is critical therefore that the Democrats choose a candidate who can win on authenticity. The nominee will need to be able to throw himself into sharp contrast with the phony Bush. On this score, all of the Democrat candidates have hurdles to overcome.

The Democrats cannot wait until mid-2004 to start getting their message across. They are not in control of the agenda, while the Bush machine is in a better position to shape the course of events next year. But if the phony tag has got traction by then, an apparent national security crisis might be seen in a different light. The phony tag will also work to minimize the bounce that Bush will get from a play on 9/11 memories at the GOP Convention in New York.

2004 will not be 1992 over again, despite the parallels with Iraq and the economy. Bush's personal appeal is much deeper than his father's, and his war is far from over. The "phony" campaign needs to start now.

Jeremy Heimans is a Frank Knox Fellow at Harvard's Kennedy School of Government, where he has been researching political communication.

Tim Dixon writes on political economy and is an attorney at the law firm Baker & McKenzie.