A booming online service for connecting people takes up arms against a sea of "fakesters" who'd rather role-play than network. 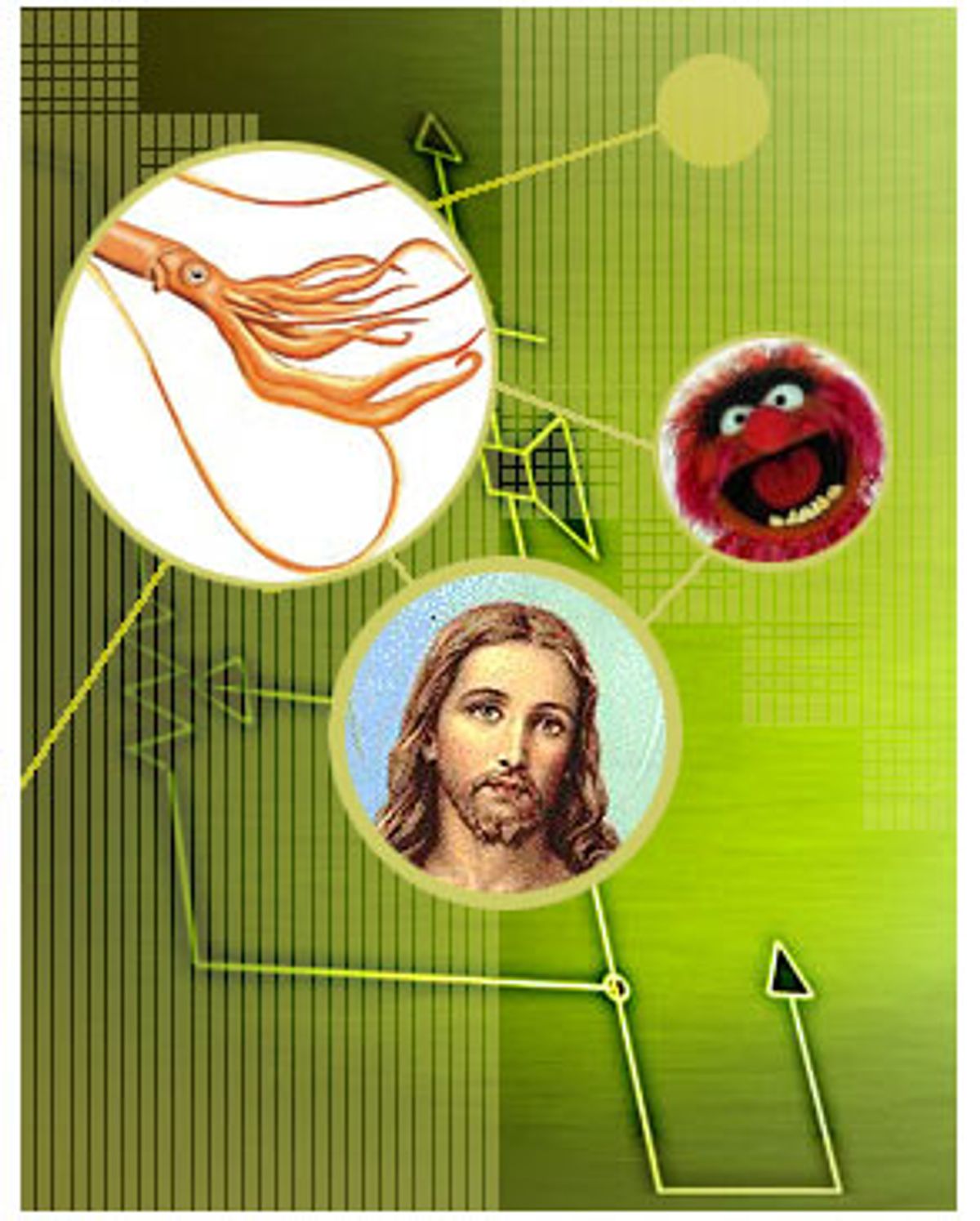 For a gigantic deep sea creature only seen by humans when it's dead or dying, the Giant Squid has a lot friends on Friendster. Last Friday, before his account was suspended, Giant Squid had 335 "friendsters."

This particular giant squid is one of several specimens of his rare and storied species found on the site. He lists his favorite music as the "wailing of damned souls" and his favorite movie as "20,000 Leagues Under the Sea." Among the squid's interests: "capsizing ships, eating human flesh, destroying corporate culture and mocking Jon Abrams."

Like playing "Six Degrees of Kevin Bacon" with your own universe of pals, acquaintances and confidantes, Friendster brings networks that already exist in the real world to the Web. Members post profiles of themselves and then ping their friends on the system to link profiles. Friends invite each other to join, which is one reason the site has grown so fast, infecting social groups and hopscotching between them, bringing new cliques on board.

Friendster quickly entered into a certain urbane vernacular -- "are you on Friendster?" -- and inspired no fewer than four online parodies, plus an infographic in the Onion. But as the site, which is currently free to use, has grown, some friendsters have taken it in directions the founder doesn't like.

Giant Squid is not alone: Among the "Fakesters" who've signed up for Friendster are Jackalope, God, Beer, Drunk Squirrel, Hippie Jesus, Malcolm X and more than a dozen Homer Simpsons. Just like regular users, they post their photos, blab on bulletin boards and collect friends like so many baseball cards. Some, staying in character, even write gushing testimonials about their friends: What higher endorsement could there be than a few complimentary words from Homer himself? "Better than a cold can of Duff beer ... "

But while it may be amusing to invite God himself into your pool of friends and get back the message, "God is now your friend," the founder of the site says that such chicanery only distorts his system.

When hundreds, sometimes even thousands of people link themselves to a popular fakester, it links up groups who have no association with each other but their mutual friendship with God or Giant Squid. While this promiscuous linking madly expands peoples' networks, it defeats what Abrams sees as the point of the site he's created: "If people are randomly connecting to these fake profiles, I guess it's funny, but it's not really that useful. We're hiring some customer support people, and we're going to get rid of all that stuff," he says.

But some of Friendster's members maintain that that site is so popular because of the creative and unexpected ways its early inhabitants used it. They charge that squelching all that ambient zaniness will just kill what's great about it.

"The bigger your network is, the more people you can meet. The whole point is that you want more people in your network," says Michelle Cohen, a Web producer for iVillage, who counts Drunk Squirrel among her friendsters. "It's not defeating the purpose, it's just creating more opportunity for networking and organic community-building. In a way, I think that the people have spoken deciding what the purpose is. That's why there are so many people on it."

"The fake characters really motivated people. It became really goofy and fun. You wanted to see what would be new," says Danah Boyd, a graduate student in U.C. Berkeley's School of Information Management and Systems, who runs the Connected Selves blog. "Unfortunately, I don't think that Jonathan likes the flavor that it's given the system."

She sees the trouble with fakesters as part of the clash between the system's early adopters and the more mainstream audience that its creator hopes to appeal to as he works to turn it into an online dating business, not just a phenom: "He hasn't figured out how to build a model to allow the Burning Man people to have a play toy, and allow the Match.com people to feel safe."

But Abrams argues that it's really just a small percentage of the overall users who create or make friends with fakesters. "I think that in the long run people will get over the silly fad of fake profiles and use Friendster for more meaningful things," he says. "There are still a lot of ways you can show creativity on the site without putting Homer Simpson on it. I actually don't think it's very creative to steal someone's copyrighted material and put it up on Friendster."

The coming fakester extermination has by all accounts already started, with fakester pictures -- some of them copyrighted -- and sometimes whole profiles being deleted without any prior notice to their creators. This, unsurprisingly, has the fakesters in a virtual froth.

On his profile, before his account was suspended, the Giant Squid exhorted others to also create fake profiles in protest. He fulminates in the "about me" section of his page: "I exist to torment Jon Abrams, CEO of Friendster, as he has seen fit to not allow those with a sense of humor to participate in his smug little plan to burn through investor funding and have nothing to show for it. What kind of person creates a revenue model that involves the deliberate exclusion of potential customers? Many of our Fakester brethren have already been deleted ... and many more will follow. Whether real or imaginary, we ARE your friends, and we exist to make you laugh, think and question reality (and other assumed paradigms.) Fight the power!"

But even as Friendster's founder pledges to crush the fakester insurrection, it's unclear how successful the still small company can be at playing whack-a-mole with those members of its ever-growing network who want to fool around. While the site has plans to charge for members to connect with their friends' friends, Abrams says it does not plan to charge just to create a profile on the site. With membership free, and no need to drop a credit card number just to join, any scheme to eliminate fakesters through human intervention seems doomed to always being one step behind of the most determined rebels. There's simply nothing to stop a squelched Giant Squid from instantly rejoining again in another guise.

An added complication: Some fakesters go to great lengths to appear real. According to Boyd from the Connected Selves blog, one group of guys invented a fake woman whose profile now lives on Friendster, so that this phantom miss could post flattering testimonials about them and introduce them to women on the system who they're interested in. Real or fake? Who can tell the difference?

Abrams says that one tool for rooting out fakesters and real people who distort the system's organizational principle by claiming anyone who will have them as a friend is the number of friendsters in your network. Link to more than 200, and you'll raise Abrams' suspicions that you're a mad friendster collector, claiming connections to people you've never met in a virtual popularity contest.

Some fakesters whose profiles have already had their pictures or accounts deleted by their unhappy host haven't bothered to replace them. There's a nascent Web site for Fallen Friendsters, which invites exiles to post their profiles. Some have simply packed up their fakery and decreed that "The Golden Age of Friendster is Over," as Adam Dugas, 32, a Brooklyn singer, wrote in an e-mail message that got picked up on blogs like Sick Candy.

Dugas, whose fake identities on Friendster until recently included the Blair Witch, says that the system peaked among his group of friends around July 4: "It was just like this weird creative outlet where people were making these fake identities around these characters, writing these insane testimonials all in character, and creating this whole little world of fake people who only lived in this Friendster. When they started cutting out the fictional people and fakesters, it put a weird damper on what was making it fun and sort of goofy."

Abrams sees the fuss as part of the growing pains of a new service that has expanded quickly: "Since we're new, people are still pushing the boundaries and seeing what they can get away with. I think every service kind of goes through this. A small percentage of people don't really get the point. The point is not to add a ton of people you don't know. If you want to message random people you could do that on any site."

But Dugas, who sings mash-up medleys ranging from Cole Porter to Nirvana and Peggy Lee, contends, "If you create something and you put it out there, whatever it is, whether is a piece of software or a song, you can't force someone to experience it the way that you want."

Given how fast Friendster has grown, it's likely to rocket onward. But some of its very early adopters already talk about it like it's a lost world of wonders.

"Everyone feels that somehow the end is nigh," says Cohen. "But it was a great ride, while it lasted, definitely the biggest and fastest-spreading street-level social meme in my cyber-lifetime."

Others think that between e-mail, instant messaging, MeetUps, Evite, Classmates.com and now Friendster, there's entirely too much connecting with random people already happening online, thanks.

In blogger Greg Storey's misanthropic fantasy parody of Friendster, Introvertster, your little virtual friend would help you keep your friends and the friends of your friends away: "Imagine being able to use the Internet and never getting any kind of instant message out of the blue, or invites to go to party," he says. "People would just leave you alone, or actually Introvertster would just magically get in the way, kind of like your own doorman."