Mel Gibson vs. "The Jews"

The "Mad Max" and "Braveheart" star says his new Jesus biopic "The Passion" could never be anti-Semitic because it's historically correct -- a dumb, and dangerous, claim to make. 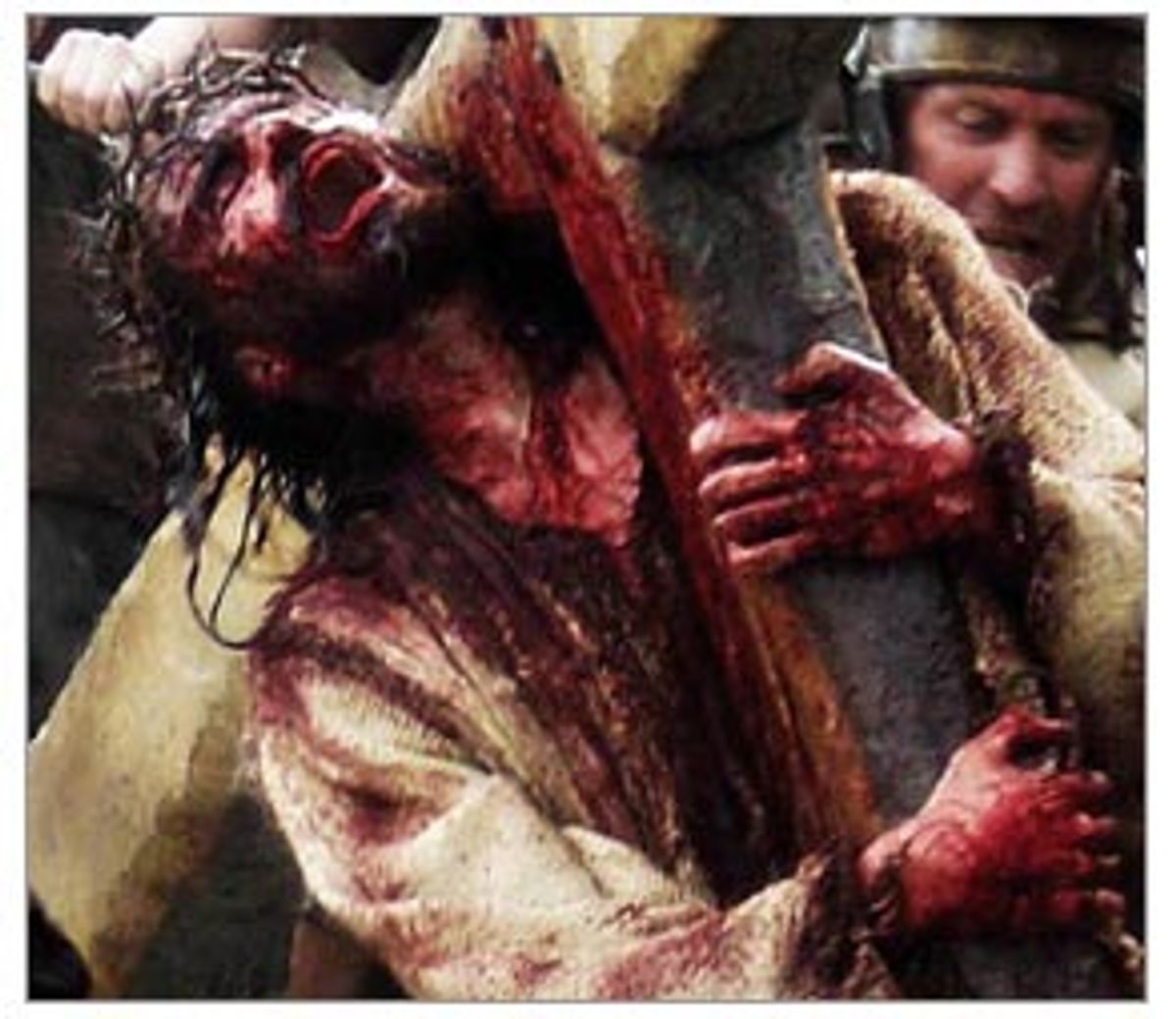 Think of it as "Mad Max Meets His Maker." Only this time the bad guys are Jews -- and lots of them -- donning the vestments of holy men. It's been a while since Hollywood's bad guys wore sidelocks and yarmulkes instead of funny little mustaches or bedsheets. In fact you'd have to time-travel back to 1947, when the U.S. Motion Picture Project was set up to prevent negative portrayals and stereotypes of Jewish characters in films.

The film that has so stirred so much feeling among Jewish and Christian scholars is Mel Gibson's "The Passion," a retelling of the execution of Jesus of Nazareth, with apparently all the usual Gibson gore. Following a recent screening of the film, the Anti-Defamation League (ADL) voiced concerns that Gibson's film, which he co-wrote, produced and directed, "will fuel hatred, bigotry and anti-Semitism," and could kick off another round of bloodshed by disconsolate Christians who had just about gotten over their savior's death.

Rabbi Eugene Korn, the ADL representative who was present at the private screening at the Museum of Fine Arts in Houston, accused the filmmakers of portraying Jewish authorities and the Jewish mob as "forcing the decision to torture and execute Jesus; of weaving a narrative that oversimplifies history; and of committing numerous factual and historical errors, including relying on the visionary writings of a 17th century anti-Semitic nun."

The fact that an ADL representative was allowed to see the film at all is somewhat surprising, and comes only after months of pressure by pro-Jewish groups and intense media scrutiny. Until this week, the film had been screened only by a handpicked traditional Catholic audience and a few Jewish Gibson supporters, many of whom report that the Jews do indeed come off looking rather guilty of deicide. (The film itself won't be released for another seven months, but trailers for "The Passion" are already popping up on various Web sites.)

But it is not only the sometimes touchy ADL that is troubled. The Guardian newspaper this week quoted a panel of three Jewish and six Catholic scholars who translated and studied a draft script, and concluded that the film is indeed anti-Semitic and theologically inaccurate, portraying "The Jews" as bloodthirsty and vengeful. "All the way through, the Jews are portrayed as bloodthirsty," said Sister Mary C. Boys, one of the panelists and a professor at New York's Union Theological Seminary. As for stirring up anti-Semitic passions, Sister Mary told the New Republic that she has already begun receiving "vicious letters filled with personal attacks and anti-Semitic drivel." Confronted with these accusations, Gibson, a fundamentalist Catholic who has bankrolled an obscure Los Angeles sect that refuses to accept the Second Vatican reforms, including the Vatican's apology for Jewish persecution, readily admits the film may ruffle a few Jewish feathers, though it is not meant to. "It's meant just to tell the truth." Besides, he says, the Holy Spirit was dictating what really went into the film.

Of course, anything an Academy-Award winning actor and director produces is going to have an air of legitimacy about it, whatever the facts may be. But is "The Passion" an innocent Hollywood entertainment or a medieval passion play of the sort that in the Middle Ages stirred up the passions of the Christian mob and led to the butchering of the local Jewry?

Gibson has bragged about the historical veracity of his script, going so far as to film the movie in the Aramaic and Latin languages without subtitles. Scholars, however, have been quick to point out the film's obvious historical inaccuracies, which, it turns out, are legion. Indeed, any theological or biblical scholar could have told Gibson that few Roman soldiers were in Jerusalem, and rather were local draftees who would have spoken one of the local dialects, Mishnaic Hebrew or, based on funerary evidence, Greek. Similarly Pilate and the chief priest Caiaphas would have communicated in Greek, not Latin.

But Gibson's biggest sin, critics charge, is his portrait of Jewish culpability in Jesus' execution.

It should be noted that to Jews of the first century, Jesus of Nazareth was simply another false messiah, one of hundreds -- a Galilean village preacher with a ragtag following of Jewish fishermen who, in various statements, claimed to be the Jewish messiah, God's son and the Jewish king all wrapped into one. The traditional Jewish messiah, however, would not be a deity, but a bellicose homo sapiens, with a hankering to lead an uprising against the Romans, perhaps someone with the stature and nobility of Alexander the Great or Julius Caesar. To claim you were the messiah but that you were unconcerned with this world was absurd. Likewise, to preach that you were God's son was the supreme blasphemy, as well as the ultimate absurdity. God had no son, and whoever uttered such absurdities sealed his own doom.

So who was to blame for the execution of Jesus of Nazareth? The Jews? The Romans? Jesus himself? Christians who believe Jesus died for their individual sins are logically themselves responsible for his death, and have no cause to scapegoat "The Jews." But if we believe the Nazarene was simply a Jewish reformer executed by his own tribesmen for the crime of blasphemy, then he suffered the same fate as thousands of reformers from the Jewish Matthias to the Christian Savonarola. Or, we may believe that Jesus was crucified because of some perceived threat to Roman authority. Rome was, after all, interested in but one thing: order. If the Romans executed Jesus it was because he was seen as a considerable threat to the stability of the empire. The gospels hint only vaguely at this, in a scene showing Jesus causing some seemingly minor disturbance at the Jerusalem temple. No doubt there was more to the story. Writing in the New Republic this week, Paula Fredrikson, Aurelio professor of Scripture at Boston University and a member of a panel of scholars who studied Gibson's script, writes:

"The fact that Jesus was publicly executed by the method of crucifixion can only mean that Rome wanted him dead: Rome alone had the sovereign authority to crucify. Moreover, the point of a public execution ... was to communicate a message. Crucifixion itself implies that Pilate was concerned about sedition ... Jesus' death on the cross points to a primarily Roman agenda."

Sedition, then, seems the likely cause of Jesus' execution, and not some minor theological squabble among Jews.

Of the five discrepant biblical accounts of Jesus' trial, composed decades after his execution by men absent from his trial, none are very helpful, nor are the disciples very trustworthy sources. We know that early Christians put great emphasis on staying on the Romans' good side lest they lose potential converts or, worse, be massacred or driven out of Rome and Jerusalem like their Jewish brethren. It is not surprising then that early Christians would blame "The Jews" (who were even then the universal scapegoats) for Jesus' death, and that Matthew would make sure that 2,000 years hence "The Jews" would still be on the hook, by attributing to the Jewish multitude the fantastic quote: "His blood be on us and on our children." A peculiar thing for a Jewish mob to shout, it must be said. The Gospel writers are exceedingly clumsy in dealing with the trial of Jesus. Again and again the Roman prefect Pilate comes off not as the iron-fisted autocrat we know from history but as a lame, ineffectual pamby who is prevented from setting Jesus free by the bloodthirsty Jewish mob. The scene stretches credulity. Likewise, many scholars dispute the accuracy of the Jews' claim that Roman law forbids them to execute Jesus. In fact, the Jews of Jerusalem executed each other all the time. They stoned Jesus' brother James, and only a year or two after Jesus' death they stoned Stephen, the traditional first Christian martyr. A well-known sign (in Greek) in the Jerusalem temple promised death to any non-Jew who invaded the inner sanctum.

The most damning piece of evidence for Jewish culpability, however, comes down from the Roman-Jewish historian, Flavius Josephus, who wrote in the early 90s C.E.: "About the same time there lived Jesus, a wise man for he was a performer of marvelous feats and a teacher of such men who received the truth with pleasure. He attracted many Jews and many Greeks. He was called the Christ. Pilate sentenced him to die on the cross, having been urged to do so by the noblest of our citizens."

"The noblest of our citizens" urging Jesus' execution would seem to vindicate the gospel writers. And yet historians readily admit that early Christian writers monkeyed with Josephus' text, adding references to Jesus' resurrection, and, likely, the sentence about the "noblest of our citizens."

The fact is that the truths surrounding Jesus' execution will never be known. And what has been handed down to posterity is legend, vision, conjecture, superstition and doubtlessly historically inaccurate. But does the Gibson film discuss the differing accounts, the historical inaccuracies, and the political nuances involved in the trial and execution of Jesus of Nazareth? Don't count on it. The audience would soon be snoozing in their seats. Instead "The Passion" will most likely offer up the familiar puerile, stereotypical view of the evil Jew calling for Jesus' blood and the clueless Pilate begging him to reconsider. It is a view guaranteed to stir anew the passions of the rabid Christian, and one that will send the Jews scurrying back to the dark corners of history.