She may be a grieving widow, but her rapturous singing -- and voluptuous curves -- suggest she won't be for long, in this sunny summer idyll. 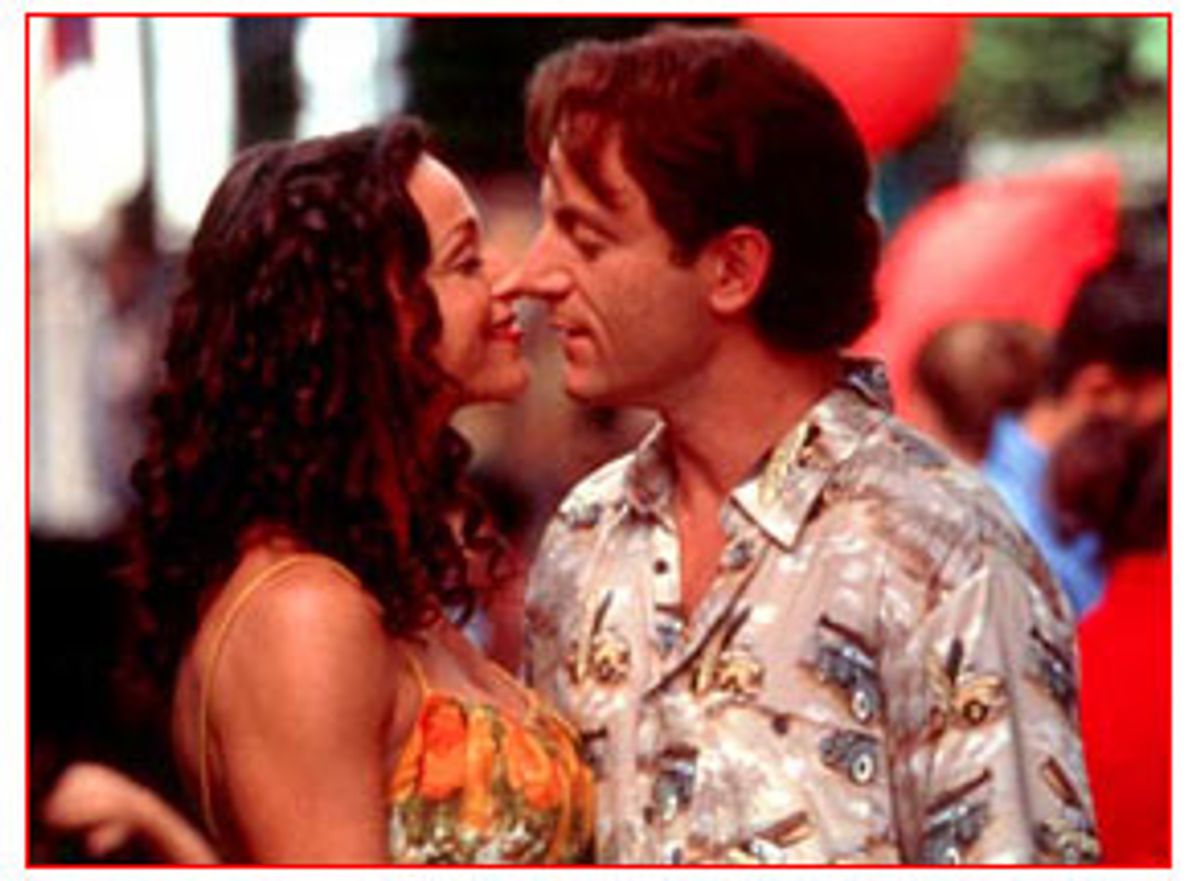 When the director George Stevens made his famous remark that CinemaScope was good only for photographing snakes and funerals, he was leaving out other possibilities. (Anyone who's seen Brigitte Bardot lounging gloriously nude across the screen as she sunbathes in Roger Vadim's "... And God Created Woman" knows that.) Stevens was speaking as a filmmaker concerned that spectacle would come to replace story and character, the nuts and bolts of movie craft. Had he lived to see the movies of director Dan Ireland, he might have thought differently about CinemaScope.

Ireland's aesthetic might be called modest greed. His movies aren't showy, but he wants the bigness that 'Scope can provide and the intimacy that comes from the interplay between actors, from the observation devoted to story and setting. Ireland may use the wide screen more intimately than any other contemporary director. In his first film, the fittingly titled "Whole Wide World," he drank in the atmosphere of Depression-era west Texas with gorgeous shots of the dry, sunbaked landscape, and he brought us heartbreakingly close to the love story between Renée Zellweger and Vincent D'Onofrio.

His new film, "Passionada," doesn't allow for the same depth. It's a slight movie, a sunny romantic idyll. But the ease with which he works in wide screen, his casual yet precise sense of composition, and his talent for working with actors are all present here. Set in the Portuguese community of New Bedford, Mass., "Passionada" (photographed by Claudio Rocha) has the relaxing beauty of a great summer vacation, the kind where you don't do anything particularly special but leave feeling recharged. That feeling is present not just in the scenes you'd expect it to be -- a street fair where it seems like the entire neighborhood has turned out -- but in the way Ireland and Rocha show us the suburban streets, the familiarity with which the characters go about their everyday chores. New Bedford may seem like an ordinary setting, but the greatest pleasure of "Passionada" is the way it allows you to wander those streets, taking in a new place, feeling the sun and the breeze and the spray of the ocean on your skin. (Their accomplishment is all the more impressive if you know how grungy parts of the town can be.)

The heroine of the script, credited to Jim Jermanok and Steve Jermanok, is Celia (Sofia Milos), a dark stunner who is already a widow in her mid-30s. Her fisherman husband was lost at sea, and Celia has taken a vow to be true to his memory. There's something both passionate and comical in her devotion to her dead husband. Tossing roses into the surf to commemorate his death at the beginning of the movie, she looks like a figure out of tragic opera. But she's too ripe, too alive, to be locked into the self-denying role she's carved out for herself. Milos' frame, long yet subtly voluptuous, tells you she's not ready for the black dresses and sensible shoes of the old widows you can see in any Mediterranean community.

The feelings she's locked away find their release in her gig at a local Portuguese restaurant singing fado, the Portuguese folk music that focuses on tales of love gone wrong and undying passion. It's the sort of popular music that allows for the dramatization and emotional wallow you get listening to Maria Callas. And the reason it makes such an impact here isn't just that Milos cuts a memorably dramatic figure performing, but that the vocals are supplied by the great Portuguese fado singer Misia. (Two recommendations about seeing "Passionada": Don't do it on an empty stomach -- the array of dishes Celia cooks in one scene will make you ravenous. And make sure there's a record store near the theater. If you've never heard Misia, chances are, you'll want to rush out and buy her CDs, as I did.)

We understand it immediately when Charlie Beck (Jason Isaacs) wanders into the restaurant one night during Celia's performance and is helplessly smitten. Charlie, who's English, is a professional gambler who's hit a streak of bad luck. Identified as a card counter, he's been banned by most casinos. One of the only ones open to him is the Indian casino near New Bedford (the casino scenes were shot at the Mohegan Sun resort). He's gone there to work his trade while enjoying the largesse of his friends Dan and Lois (Seymour Cassel and Theresa Russell), a pair of card sharps from his glory days who have accumulated enough to settle down and enjoy life in style. Charlie may have hit a bad patch, but he's nothing if not persistent. Though he's as out of place in New Bedford as a zebra in Texas, he sets out to woo Celia. She has not allowed for the possibility of loving a man again, and when he keeps butting up against her stubbornness, he concocts a story about having spent time in Portugal, tantalizing her with bits of knowledge he's picked up and making her believe their love match is fated.

It's easy to see where the story will go from there -- first, the revelation that Charlie has deceived her, followed by his having to convince her that his feelings for her are genuine. But making a movie that honors the conventions and structure of romantic comedy is not the same thing as making a picture that's rote. And Ireland has delight on his side, the delight he takes in the setting and the delight he takes in actors. At times you wish Sofia Milos had gone for broke, pushing both the way Celia's bottled-up feelings come spilling out and the comedy of the role she's conceived for herself as permanent grieving widow. She can seem more ordinary than her ravishing looks seem to allow for. But she's got tremendous self-possession and a bearing that's both offhand and near regal. And those work in the character's favor, capturing the task Charlie has in front of him if he's to break down her defenses.

The real acting story of "Passionada" is Jason Isaacs. Playing Lucius Malfoy in the two "Harry Potter" movies and Mel Gibson's evil Redcoat nemesis in "The Patriot," Isaacs seemed a sort of matinee-idol villain, not getting to express much beyond sneering good looks. He's softer here, more relaxed. There's something becoming about watching an actor as handsome as Isaacs play a good-natured screw-up. The smile he gets to flash, and the almost palpable longing he radiates when looking at Milos, are very becoming. They lighten him as an actor, give him an air of playfulness he's never gotten to show on-screen. You get to enjoy a romantic lead who's both a bit of a rogue and one in whom love feeds the desire to be a better man. He doesn't overplay the former or sentimentalize the latter. It's a charming performance.

The third major character is Celia's teenage daughter Vicky, played by Emmy Rossum. She runs into Charlie at the casino one night and strikes a deal with him: She'll help him woo Celia (she's sick of her mother's cloistered-widow routine) if he teaches her how to count cards. Rossum has certainly progressed beyond the calculated cuteness she showed in "Songcatcher." Wide-eyed and with something of a manic streak, Rossum might raise some serious hell if she is ever unleashed in a full-bodied comic role. She's still a little too eager here, pushing herself instead of allowing us to come to her. But her exchanges with Milos, and the way she tries to cross the line between daughter and friend with Celia, have a convincing ring.

Ireland's sure touch with the actors is apparent in the small roles as well. As Celia's mother-in-law, Lupe Ontiveros ("Real Women Have Curves") at first appears to be set up to play the life-force old ethnic mama. But she resists that cliché and comes across as someone with hard-headed good sense. Seymour Cassel, as he's shown in some of his recent roles (particularly in "The Sleepy Time Gal") has attained the appeal of an actor who's perfectly comfortable in his own skin. There's a lovely moment, as he sits by his pool and his wife cuddles against him, when he looks like a happy old walrus who can imagine no greater pleasure. And Ireland even tamps down the usually actressy Theresa Russell, who acts here in a recognizably human range. She's particularly good in the scene where she visits Celia to plead Charlie's case. And Ireland has given her a terrific sight gag: After piling into a diner later at night with Cassel and Isaacs, she nonchalantly takes a miniature bar set out of her bag and lovingly mixes her husband a martini.

There's a certain type of comedy that gives the audience the satisfaction of wish-fulfillment without sacrificing the gentle irony of how things unfold. Every character in "Passionada" winds up in a better, happier place by the end of the movie, and Ireland makes you laugh at how well fate has worked, even as you enjoy seeing the characters happily paired off. It may sound like faint praise to call a movie pleasant, but when it's as good-hearted and assured as "Passionada" is, when a filmmaker trusts the audience to respond to its charms instead of pushing phony charm on them (the movie is not "My Big Fat Portuguese Widowhood"), when a movie has a sense of place that is both delicate and enormous, you can leave the theater feeling flattered as well as delighted. Ireland is a genuine charmer. Coming at the end of a rotten summer for movies, "Passionada" is like being handed a glass of cool, clear water when for weeks you've been asked to swill bilge.