In this flat comedy, a rock heiress loses her fab pad and must take work as a nanny to support herself. 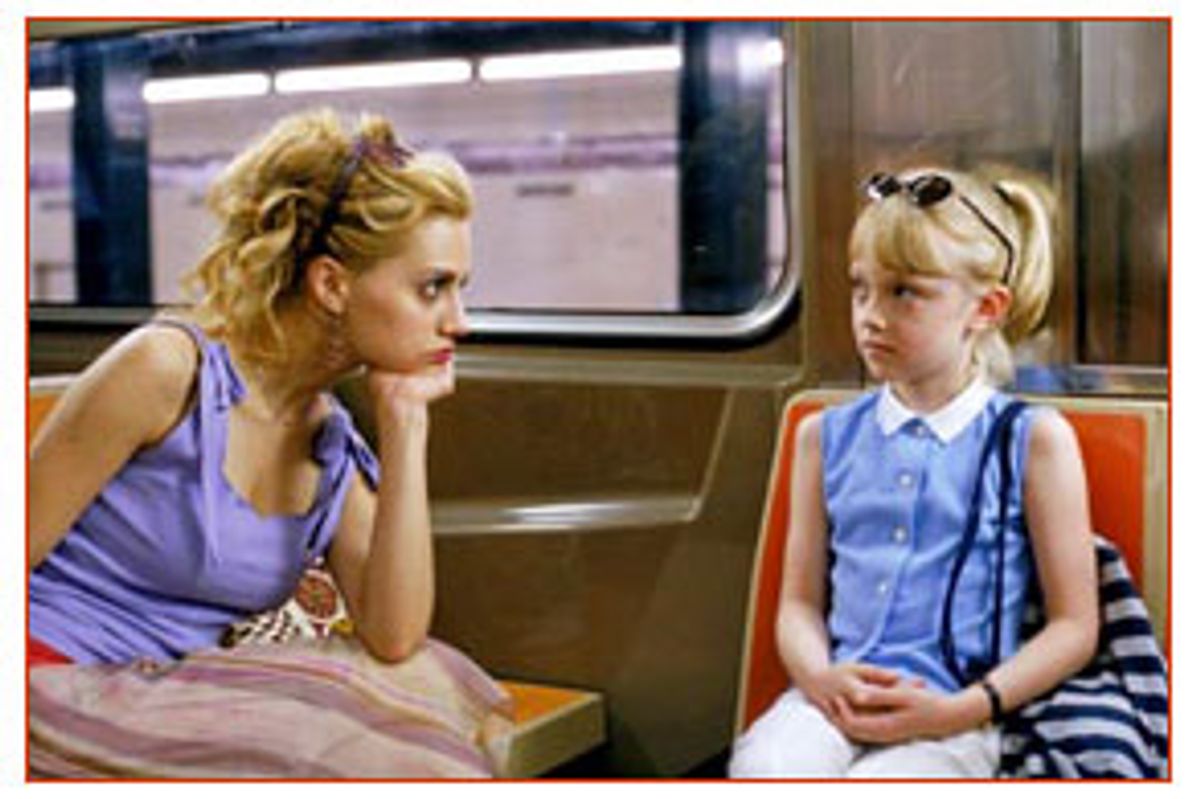 I can't believe I didn't love a movie whose opening sequence features a lovely and petite pink pig trotting through a palatial Manhattan-via-Morocco apartment until he reaches a very tall four-poster fairytale bed, whose stairs he ascends to nudge his sleeping rock-royalty-princess mistress awake. But I didn't. "Uptown Girls" is a modern fairytale that loads up big-time on the girly trappings -- its heroine's wardrobe features more floaty, artfully tattered chiffon than you can shake your Barney's charge card at -- but doesn't give you much in the way of plot or characters or even plain old sense. Sure, I wanted to live in the Moroccan-palace apartment with the cute pig and the fabulous wardrobe. I just didn't want to have to sit through the movie.

Brittany Murphy plays social butterfly Molly Gunn, the 22-year-old daughter of a very famous and very deceased rock star, who's been set up for life -- or so she thinks -- in those aforementioned zillionaire digs. One day she realizes all her money has been stolen by her nefarious accountant, which means she has to buck up and get a job. There's only one she's able to hang onto: She becomes, by default, the nanny of a persnickety, germ-phobic, ballet-obsessed munchkin named Ray (Dakota Fanning), whose parents, for very different reasons, have very little time for her: Her mother (Heather Locklear, in a role that doesn't use even a thimbleful of her prodigious comic talents) is a record-company mogul who spends all her time hanging around young rock gods; and her father, who has suffered a massive stroke, has lain in a coma for months.

When we first meet Ray, she's done up in a Chanel knockoff suit complete with a little string of pearls, even though she's only 8. She mouths off to Molly on their first meeting; later, she gives her the finger. But before long, Molly and this love-starved moppet have bonded like glitter glue, and you know why? Because they're both scared, and they both struggle with repressed pain. The solution to said pain is -- who knew? -- riding in the whirling teacups at Coney Island.

Fanning is slightly more bearable here than she was in the shamelessly wretched "I Am Sam," where she played the effervescently sensible cutie-pie daughter of retarded Starbucks barista Sean Penn, a fate I'd never wish on any child actor. In "Uptown Girls," she's watchable partly because she's learned to turn down the old pathos-milker a notch. It also doesn't hurt that she's really good at giving the finger, and there's something liberating about seeing a kid do that (as long as it's not your own).

But the real trouble here is Murphy, who just may lose her astonishing knack for screwball comedy if she doesn't start choosing better roles. Murphy has a few wonderful moments: At the Laundromat on her own for the first time, she empties her laundry bag into the washer and then backs up to it discreetly, shimmying out of the panties she's wearing so she can toss them in, too. She's coltishly charming, but mostly she seems all too aware of it. She pouts endlessly, clicking into the same winsome expression over and over again.

And she isn't at all well-served by a script (written by Julia Dahl, Mo Ogrodnik and Lisa Davidowitz) that has her falling for a dopily sensitive rocker-dude (Jesse Spencer) who ends up betraying her, only to ambiguously slither back into her affections for no reason we can fathom. Director Boaz Yakin ("Remember the Titans," "A Price Above Rubies") tries to keep the tone light and fluffy, but the movie deflates too often to be successfully resuscitated.

And even though Molly undergoes a miraculous transformation during the course of the movie, there's no getting away from the fact that she's simply a flaky, spoiled brat. Once she starts pulling herself together, she complains that her best friend Ingrid (Marley Shelton) is too controlling -- she's not wrong, but she seems to have forgotten that it was Ingrid who pretty much held her together when she first lost all her dough.

We're supposed to feel sympathy for Molly because her parents died tragically when she was only 8, and because she's a free spirit with a dazzling smile, but her act wears out its welcome pretty quickly. And frankly, once she gets kicked out of that glorious apartment, which happens all too early in the movie, you feel you've lost touch with the one element of the picture that had real character -- besides, of course, that fabulous pig.