CBS's "Amazing Race" proves that nothing brings out the beast within couples like dealing with traffic, layovers and illegible maps. 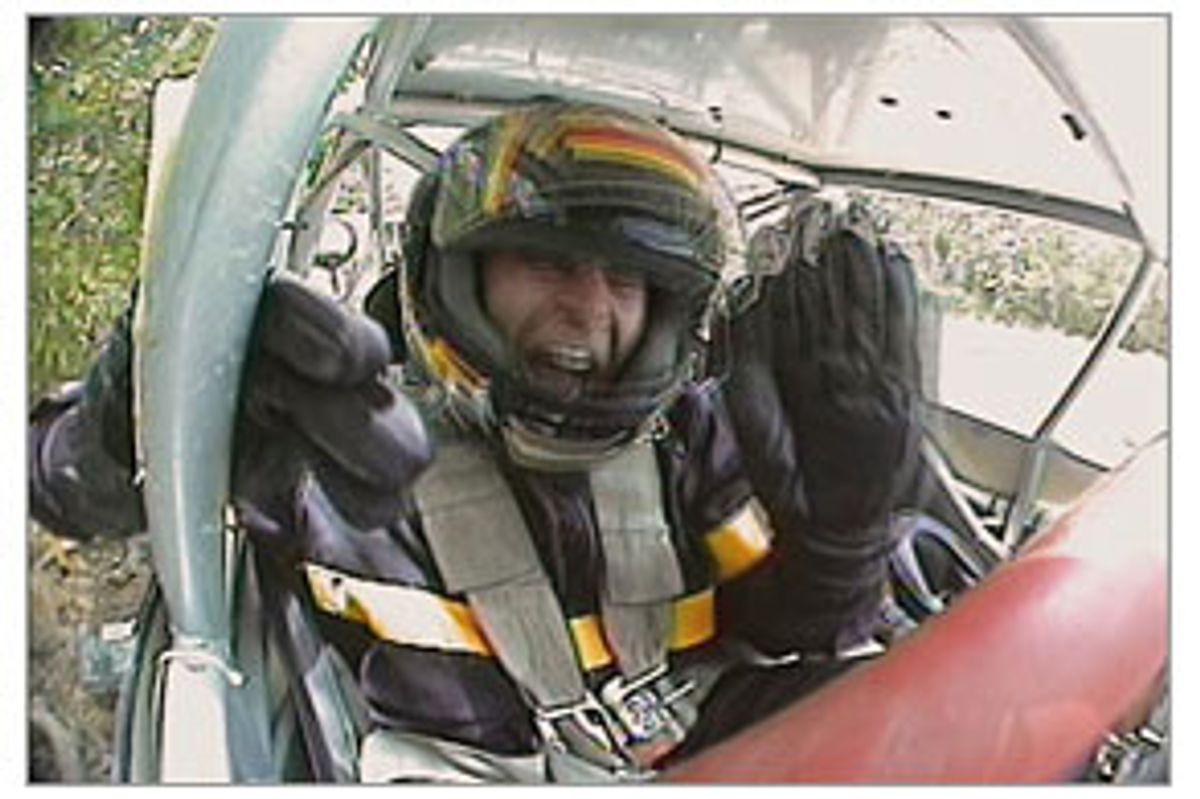 With so many dating and relationship reality shows on the air, it's remarkable how few actually manage to hold your attention for more than a few seconds. "Perfect Partners," "For Love or Money," "Elimidate," "The Bachelor" ... After the initial novelty wears off, watching these shows is like going on one really bad date after another. If you wanted to sit through moronic, inane banter punctuated by awkward silences, why wouldn't you just ask out a socially inept halfwit yourself?

If, instead of watching people pretending to fall in love for the camera, you'd prefer to see established couples fall into a downward spiral of contempt and hysteria -- and who wouldn't? -- then "The Amazing Race" is the show for you. Don't let the silly world-travel challenges fool you. "The Amazing Race" is all about dragging long-term relationships over the red-hot coals of conflict. And whether the couples are straight newlyweds, middle-aged gay partners, or frat-boy buddies with flashes of homoerotic excitement at every turn, the seething and the spitty insults are just a grumpy taxi driver who doesn't speak English away.

While "Pirates of the Caribbean" and "The Rock" were certainly timeless classics, who knew Jerry Bruckheimer had the vision to back a show that's basically a relationship compatibility quiz from a women's magazine, set into live action? As our intrepid couples endure a steady stream of panic-inducing situations, skillfully edited to maximize the nail-biting suspense, we can almost see the seams of their relationships ripping before our eyes. Week after week, the couples strain to keep the peace with each other while keeping pace with the other teams, but the cumulative effect of the gantlet of impossible tasks -- from traveling across India on smelly trains filled with groping men to rappelling face-first down the side of a building in Australia -- creates permanent rifts and visible emotional scars.

"The Amazing Race" has always been an imaginative and well-produced show, but this year's lineup of couples has offered more hilarious calamities and personality clashes than usual. Sensing the real reason why audiences tune in, the show's producers have taken to casting at least three or four teams with poisonous interpersonal dynamics. This year's Most Attacking, Codependent Couple Award has inspired a worthy battle between engaged couple Amanda and Chris, girlfriends Tian and Jaree, and soon-to-be enemies Cindy and Russell. During the second episode, Chris and Amanda inched closer to the title when Chris let loose a torrent of abuse on his fiancée while they were navigating the canals of Venice in a gondola.

Chris (snatching map from Amanda): Give me this, because you suck at this.

Chris (voiceover): I'm gonna do whatever it takes for us to win.

Amanda: This is so cool!

Chris: It's not cool if we come in last.

Chris (voiceover): If I have to, you know, be mean about something, I'm probably going to.

Sadly, though, after we watched Chris verbally and emotionally abuse Amanda until she was a beaten-down shadow of her already beaten-down self, the two were booted thanks to Chris's utter incapacity to complete a simple matching game. Amanda summed up the vortex of pain and anguish that is her relationship with the following words: "He's still a little jerk, but I love him, it's OK." Substitute "big, snarling, abusive asshole" for "little jerk" and you've got about half of the picture.

But since The Little Jerks were eliminated before violence erupted, Cindy and Russell picked up where they left off, with Cindy accusing Russell of being "ultra-controlling" and sniping, "It's amazing I even got through the world without you!" Ah yes, there's nothing quite like a scolding, sarcastic tirade to get a man on your side.

Even though they just started dating, these two bickered like an old married couple. If you've navigated your fair share of crappy relationships, it's tough to resist the perverse thrill offered by watching a couple break out into a heated argument about nothing.

Russell: We're not playing as cutthroat as some people ... We may argue amongst ourselves, or whatever, but ...

Cindy: That's the stuff we got to avoid ... I think our weakest link between us is because of this between us.

Russell: Yeah, but see that's not, that isn't slowing us down.

Cindy: Oh, I think it absolutely is.

Russell: Alright, see, you're actually getting on my nerves right now.

Unfortunately, when contestants want to strangle each other, it seems to take a toll on team spirit, and Cindy and Russell were sent packing that day.

But if the award went to the pair who successfully combined vitriolic outbursts with a burning desire to kick ass, Tian and Jaree would be the clear winners. The two women, described as "Models" and, less convincingly, "Friends," were perhaps the most spectacular combatants of the season, hurling insults to each other's faces and to the camera without tact, remorse, or shame.

Tian: You can't keep up! In the footraces we've done so far, you're always in the back!

Jaree (voiceover): I feel like she's judging me to death, but not for any other reason than to make herself look good.

Like a fault-finding wife hell-bent on shaming her husband into behaving, Tian regularly denigrated Jaree in front of the other teams.

Tian: You're holding onto stuff you don't need, and you can't run with it!

Jaree (leaving): You know what? I cannot sit with you. I cannot look at you.

Tian (following her): I'm gonna sit here and bitch until you take shit out.

Jaree: We're in public, we're on a train. Do me a favor and shut up!

A few seats over, engaged couple Kelly and Jon giggled and pointed. These two would seem like a mean-spirited, pathetic pairing, if they didn't roll with the punches so well despite their verbal sparring. They're one of those deceptive duos who call each other idiots and tell each other to fuck off constantly, but don't hold grudges and never seem worried about the longevity of their relationship. Kelly regularly questions Jon's decisions and calls him a dummy, then gets a big crow-eating grin when he's right. Jon returns the favor by jeering at her when she's trying to complete a task.

On a recent show, he insisted on instructing her on how to break some boards with her fists, even though she kept telling him to keep quiet. Her knuckles bleeding from a few failed attempts, it was obvious that she was in serious pain, struggling not to break into tears. Finally, Jon said, "Imagine the board is my face. That's my face! Hit my face! Hit my face!" Kelly promptly smashed the boards in two with a resounding karate chop, proving once again that this is a show with more good old-fashioned laughs than "The Honeymooners."

But if you really want to meet the Bickersons, check out virgins Millie and Chuck, who've been dating for 12 years without sleeping together. Globetrotting with sexual tension so thick you can't cut it with a Ginsu knife sounds sexy, doesn't it? Well, get a load of cold, bossy, asthmatic Millie, whining and rolling her eyes at withdrawn, wishy-washy, panic-stricken Chuck, and I guarantee you'll sooner hope for circus clowns Jon and Al to bump uglies.

Not surprisingly, the pressure gets to the Crabby Virgins a lot faster than some of the other couples. Since fate seems to enjoy torturing this pious Christian pairing, the two decide to stay up late every night strategizing instead of shagging and then catching some shut-eye like other healthier, more sin-friendly teams. Here's some groundbreaking strategy for you two: Stop freaking out and get some sleep.

You have to hand it to the Virgins for rubbing everyone else the wrong way, though. It's the kind of situation that does a reality casting-director proud every time. While Chip and Millie almost get into a fistfight over a horse-drawn carriage, Jon and Kelly repeatedly refer to Millie as "Millie the Mole" -- due, cruelly enough, to the large mole on her face. "Millie the Mole, she's a little jack rabbit, she's on my nerves!" Kelly snips, and it's easy enough to believe that Kelly is the little jerk here, until Millie proves herself to be consistently high strung and pissy for most of the second half of the race.

During a "traditional Malaysian good luck blessing" which gay beauties Chip and Reichen report was like "getting married all over again" and even The Clowns thought was "special," open-minded Millie says, "Being a Christian, it was just a little unusual. I mean, what could they be saying? They could be putting a voodoo chant on us!" This from the woman who put a voodoo chant on Chuck at the racetrack, shrieking at him to hurry the hell up while he was clearly having a panic attack. "I feel tight! Hot and tight!" he mumbled. "It's not good timing, I know!" After 12 years of virginity, your timing is apt to be awful. But was Chuck experiencing claustrophobia, or some kind of a waking wet dream?

As if to make up for the cutthroat tactics, smeared eyeliner and matching outfits of Team Guido during the first season, the show's producers chose to cast hopeless romantics Chip and Reichen, thereby giving gay reality adventurers a far prettier, friendlier face. Aside from The Clowns, Reichen is easily the most likable contestant on the show this season: he's smart, easy on the eyes, and calmer than a cucumber in almost every situation, whether he's pulling a piece of a still-wriggling Octopus tentacle off his teeth or navigating an aquarium filled with great white sharks. And, on top of his grace, nice manners and striking good looks, he rarely seems to make mistakes. It's no wonder the only battle worth watching here involves Chip's relationship to himself. He berates himself constantly for not trusting Reichen's instincts or not following Reichen's lead. Most of the time, it seems like he's just mad at himself for not being Reichen -- and can you blame him? It almost makes you glad that you're not dating an even-tempered Adonis. But not quite.

As the season nears an end, three teams -- Kelly and Jon, Chip and Reichen, and David and Jeff -- battle it out for the title of Bestest Couple Around ... oh yeah, and the million-dollar prize. At this point in the game, all three couples are so tightly wound, they look like they drank half a pitcher of strong coffee and then sat through several hours of couples therapy. So it's not surprising when Jon wrecks the dune buggy and Chip runs over Reichen's foot in an SUV. It's annoying that the bland frat boys, David and Jeff, are pulling into the lead, unhampered as they are by the baggage that comes with sexual intimacy -- for now, anyway.

But forget the winners. What we really want to know is, will Millie and Chuck ever sleep together? Are Russell and Cindy just friends again? Are Amanda and Chris even speaking? If ever a show was ripe for a postmortem special, this one is it.

No doubt about it, "The Amazing Race" is the ultimate litmus test for a relationship. If only all engaged couples were forced to sleep on the streets of India or navigate the hinterlands of South Korea before they got married, divorce rates in this country would decline faster than you can say, "Do me a favor and shut up!"