As Hollywood scours film and TV history for that next "Charlie's Angels" or "S.W.A.T.," studios have begun to lavish attention on an underappreciated expert: The video-store clerk. 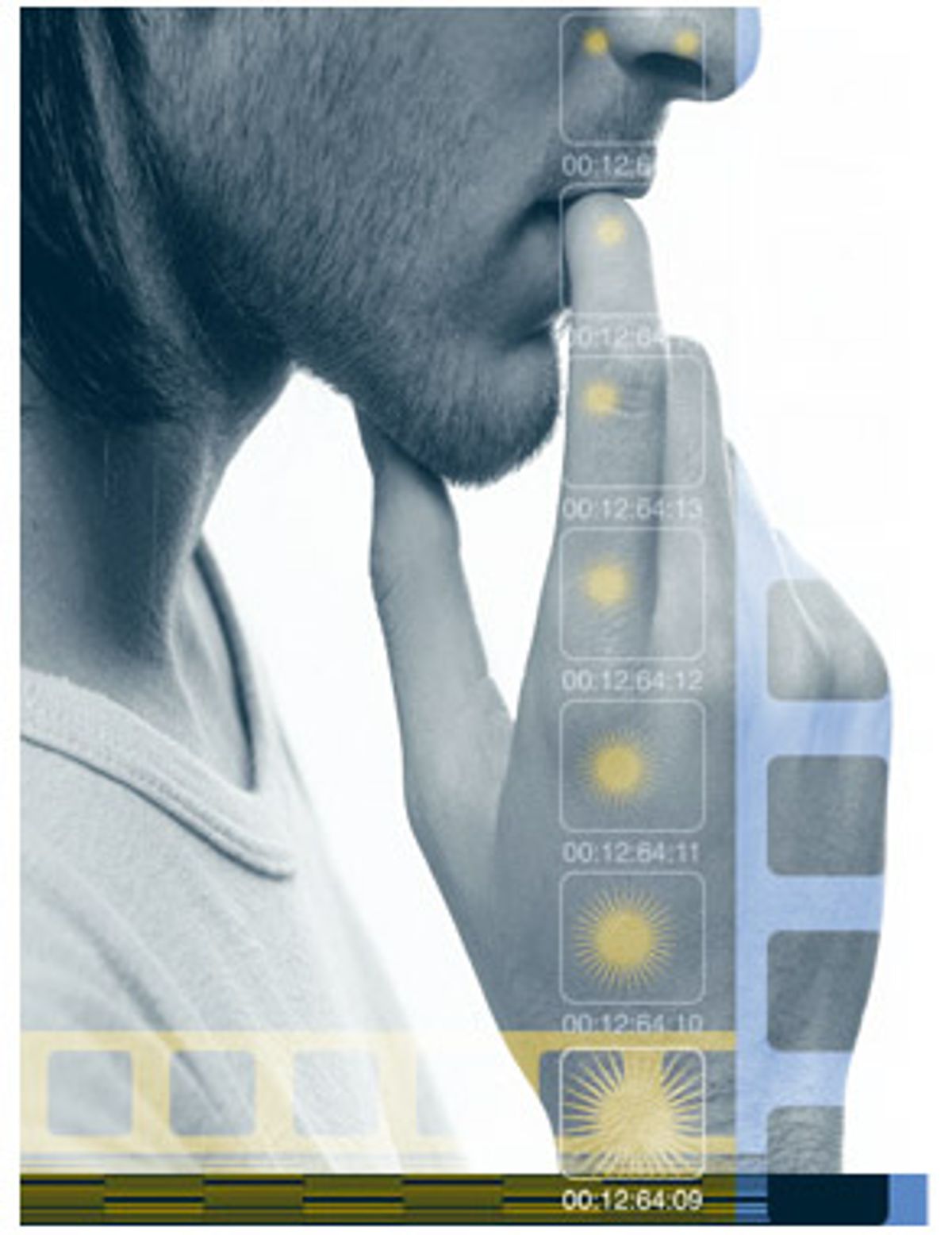 The old video-store saw goes like this: A Paramount studio executive walks into a video store and asks the clerk for a copy of the old movie classic "Sunset Boulevard." As the clerk hands him the tape, he tries to make chitchat with the executive: "Gosh, you must be a Gloria Swanson fan."

The executive snaps, "Who's Gloria Swanson?"

A little stunned, the clerk says, "Gloria Swanson! Didn't she save your studio once upon a time?"

Lon Shimabukuro rolls his eyes gleefully as he tells the story. He swears it occurred about 15 years ago in the independent video store that he co-manages, the Beverly Videocenter, a small but impressive collection of titles located in an Olympic Boulevard mini-mall in Beverly Hills, a stone's throw from Hollywood's talent agencies. It's a story that makes other video-store clerks chuckle in bittersweet solidarity, for it underscores a long-held belief among their Los Angeles clerking brethren: The lowly, self-taught independent video-store clerk is often incredibly film-savvy, and the studio executives who frequent their stores are often more or less film-illiterate.

But many clerks say that this culture clash has been in evidence with a bit more gusto of late. Variety reported from L.A.'s recent Book Expo on how studios' interest in new literature as source material has declined. Said one top literary agent, "They just want something they can put on a one-sheet or in a tag line, they want instant gratification," suggesting the execs are shunning more complex, un-Harry Potter-like fare. Instead, studios have been increasingly keen on video games and recycled TV shows, material that will draw in the 18-32 crowd for a surefire winning opening weekend.

Then, of course, there's the big-budget remake -- ostensibly tried-and-true fare for baby boom and post-boomer generations. Trying to capture their hearts yet again, Hollywood has recently remade "The Thomas Crown Affair," "Get Carter," "The Italian Job," "Willard" and "Planet of the Apes," and has in the pipeline rehashes of "The Stepford Wives," "Sleuth," "Shall We Dance?" (from the Japanese original), "Fun With Dick & Jane" and "The Producers."

And so, according to video-store clerks, they're being leaned on more and more by younger and less film-literate producers, development executives and even writers to deliver inspiration for the next remake, the next cash cow, the next "Charlie's Angels." "I can't tell you how often it happens," says Shimabukuro. "Some uninspired film industry person will run in here and pressure me with questions like, 'What should we remake this year?' or 'What are people renting?' or even 'What other movies do you have with big, fat Greeks in them?' They really don't know their stuff."

He points to a small article taped to the checkout counter, titled "We're Not in Chinatown Anymore." "Look at this!" he says. It's from the Boston Globe earlier this year, and it lists the top 10 "new classics," as cited by today's film school students. They include such au courant gems as "Fear and Loathing in Las Vegas," "The Matrix," "Memento," "The Big Lebowski," "Amélie" and "Fight Club." The oldest movie on the list is "The Godfather," made in 1972.

When asked what film is most recommended but least appreciated by the industry types who frequent his store, Shimabukuro says without hesitation, "'Casablanca.' They think it's too full of clichés. And 'Citizen Kane.' It's too complicated for them. They think the flash-back-flash-forward narrative was invented with 'Pulp Fiction'" -- the top-rated flick in the aforementioned film students' top 10.

Orson Welles' mold-breaking 1941 black-and-white classic may be the bugaboo of the film unenlightened: One clerk at Vidiots, Santa Monica's indie Mecca for film rentals, says: "I remember once getting a call from a studio exec who asked, 'Do you have "Citizen Kane"?' I said, 'Sure we do.' He insisted, 'But do you have the one with Orson Welles?'"

"Here's a classic example," muses Hadrian Belove, film sage and part owner of Cinefile, the popular West L.A. collection of hard-to-find titles. "A woman came in recently, claiming to have a deal of some sort with DreamWorks. She said she 'helped' get the rights to the original Japanese movie that became 'The Ring,' and she wanted our advice. She basically roped one of our $9-an-hour clerks into meeting with her three times a week for a measly $75 to educate her on all the 'good' and 'bad' Japanese titles out there so that she could pitch more remake-able properties to the studio. I told him to either ask for more money or to get out. Clerks don't really value the knowledge they have. They need to toughen up."

As Belove explains, he's developed a policy: "As a rule, we try not to be that helpful," he chuckled. "We have this running gag here that if someone comes in asking for remake ideas, we tell them they've just got to get their hands on the rights to 'Sky Riders,' made in 1976." He cocks his eyebrow sardonically: "You've seen it, right? The James Coburn skydiving movie?"

Though some might consider video clerks to be complete film nerds, shunning all greater material gain and social advancement just to sit in the dark, many Hollywood clerks insist that there's a slippery slope to remaining the purists they thrive on being paid to be. At Vidiots, which boasts 40,000 titles and markets itself as a film archive, several clerks, who insisted on being quoted anonymously, point out that their store is in large part funded by studio and Hollywood industry largesse via corporate and other accounts. It's not unusual for one client to come in and borrow multiple titles at a time for research purposes, a habit that represents a boon in the nickel-and-dime world of video rentals. "We have a reputation for being really helpful to movie industry people, to all our clientele," says one Vidiot. "It's an informal thing. If we have time and there's no line at the counter, we'll research a movie topic for anyone who asks, free of charge. A client will want to get, like, a list of movies with shipwrecks in them, or scenes with people saying goodbye at train stations, so we'll make one for them."

Many of the Vidiots employees, he adds, have been boxing, shelving and educating themselves about film in the store's trenches for years. "But I've found that often people don't know what they want, and they'll end up trying to get you to do the work for them," he goes on. "That's where you have to draw the line. It's very subtle; you might not even know they're doing it."

Sometimes, though, the pressure to come up with the inspiration for the next "tent pole" title is much more blatant: "One female executive called while she was in a meeting, and she put me on speakerphone so all the other executives could hear me," this same clerk says. "She said, 'So, what should we be remaking now?' I said, 'I'm sorry, I can't help you with that.' She then insisted, 'Come on! I'll send you a basket of Mrs. Beasley's Muffins!'" he chortles, referring to a tasty, if unremunerative, unimpressive and extremely consistent item of studio swag. "I had to tell her I didn't want one."

Nodding in agreement, another clerk cuts straight to the chase: "I'm being paid $8.50 an hour, and they're making 10 times, 100 times more, and they want you to do their homework! It's really insulting."

Of course, the video-store clerk has become a storied figure in modern American cinema, with the rise of ex-clerks like Tarantino and Kevin Smith, and Smith's own homage to the profession in "Clerks." But surprisingly, none of the clerks interviewed say they have any such aspirations to work in the film industry (though Belove would like to branch his store into a distribution company). None read the Hollywood trade papers; most say they just love to watch movies, as well as stimulate talk about them. Adds Belove, a little defensively, "Hey, some people are just good at making deals. There's many kinds of talent out there. Talent has little to do with success."

The clerks are quick to point out, however, that they're not such motion-picture Puritans as to disdain remakes. "Remakes can be great!" says Belove, and the titles come rolling off his tongue: "They've made about four or five versions of 'The Maltese Falcon,' including TV versions. Two versions of 'Possessed,' both of them with Joan Crawford. They remake 'Mutiny on the Bounty' every 20 years! It's just that they don't credit anybody. They should at least thank the original, like [Brian] DePalma did at the beginning of his 'Scarface.'" Insisting that he's not a studio-release sourpuss, Belove adds, "Some incredibly great studio movies were made last year -- 'Adaptation,' 'The Hours' ... I actually think we're in the middle of a real film renaissance right now."

Shimabukuro posits that perhaps a culture only has so many stories to tell. "The story is important, but if you're a good filmmaker, it's your voice that's unique. Think about it: One of the best movies of the last few years was 'You Can Count on Me.' And what was it about? Not much. A woman, her son and her brother."

When asked what solutions they would propose to bolster the film literacy of Hollywood's hit makers, the keepers and catalogers of our film heritage offer such helpful hints as "Give them all unlimited rentals! A gold card from our store!" and "Make them watch all the AFI Top 100 lists! Every single one!" But in a thoughtful moment after the fist-pumping fervor dies down, one of the Vidiots clerks ponders aloud the obvious: "The film world has such a rich history. It makes no sense not to know it if it's your business. And it would actually be enjoyable learning all this history, watching all these movies. I mean, why wouldn't you want to?"

Elizabeth Segal is a freelance writer living in Los Angeles.