Superbug to the rescue!

Genetically modified plants and microbes that gobble up pollution sound like a great idea. But who will clean up after the cleaners? 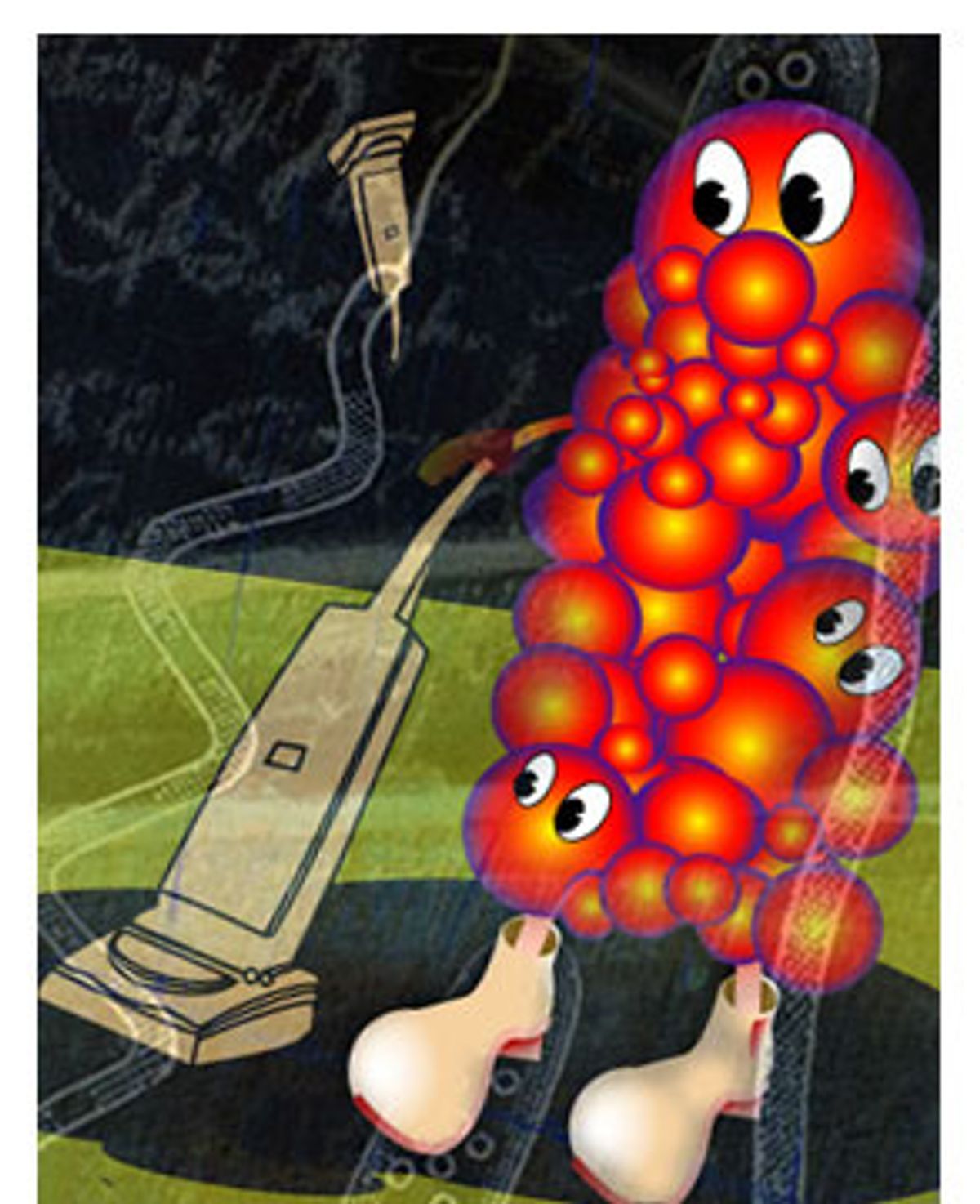 It's a kind of Superfund superplant, a leafy organism designed specifically to devour the hazardous waste that industrial machinations and human carelessness have left in the ground.

The genetically modified mutant plants suck heavy metals, such as lead and arsenic, out of the soil into their roots, stems and leaves, cleansing the contaminated soil. It's an intoxicating vision: Imagine fields of these valiant plants fighting part of the $700 billion battle that the United States faces in mopping up polluted Superfund sites.

This green-dream promise may have moved a bit closer to reality, according to research announced by a group of biologists at the University of California at San Diego. The researchers found that in modifying a mutant variety of Arabidopsis, a relative of the mustard plant, the plants would detoxify and suck up several common heavy metals into their stems and leaves. Four of the top six heavy metals found at Superfund sites -- lead, arsenic, mercury and cadmium -- are among those the plants can ingest, reported the researchers in the Aug. 19 issue of the Proceedings of the National Academy of Sciences.

The lure of bioremediation -- the practice of using organisms to restore damaged or contaminated areas -- is that toxic cleanup can be done more safely and for less money than by traditional means.

"Right now, the standard technology is to dig soil up, put it on trucks. You've just moved it from point A to B. Hopefully you're picking a site with less groundwater problems," says Julian Schroeder, a biology professor at UC-San Diego, who led the team of researchers working on the plants. "What bioremediation engineers would prefer is if you could go in such a field and simply cut the plants off and harvest the toxins. You wouldn't have to dig up soil and create a lot of dust, which, if there are toxic metals in there you wouldn't want to do."

The scientists found that phytochelatins -- chemicals produced by an enzyme whose gene the lab co-discovered four years ago -- allow the metals to move through the plant, up from the roots to the shoots for easier harvesting.

The UC-San Diego research is still very much taking place in the lab, and not out on actual toxic-waste sites, but it suggests the kind of hope that genetically modified organisms might hold for cleaning up the damage that humans have inflicted on their environment. At the same time it poses a dilemma for environmentalists, who have been wary of any form of genetically modified organism that might escape its boundaries and end up harming surrounding ecosystems. As scientists get closer to making bioremediation a working reality, a question that few are asking is becoming more important: Who will clean up after the cleaners?

Will environmentalists and federal regulators embrace these new creations, or will they decide that tinkering with the balance of Mother Nature is just too risky?

For more than two decades, scientists have been heralding the arrival of genetically modified organisms for bioremediation. But so far, none have actually reached the toxic sites they're supposed to clean up. Perhaps the most famous incident occurred in the 1970s, when a scientist doing work for General Electric created a microbe that was supposed to eat up oil spills. Patenting the microbe led to a lawsuit that eventually reached the Supreme Court, and it set the precedent for the legal right to patent any genetically modified life-form, thus providing the legal foundation for the entire commercial field of biotechnology.

In the 1980 case of Diamond vs. Chakrabarty, Dr. Ananda Chakrabarty, now a professor at the University of Illinois College of Medicine, received the first patent on a genetically modified life-form. But his micro-organisms haven't flourished in the intervening two decades.

"They had genetically engineered a micro-organism which could eat oil," says Frank Chapelle, a hydrologist for the U.S. Geological Survey. "As it turns out, all that became superfluous, even though the genetic engineering was brilliant. It turns out that natural micro-organisms were capable of doing the same thing."

As the field of microbial biology continues to advance, scientists have found that some oil-eating microbes naturally occur at oil spills. Current bioremediation efforts focus on encouraging those microbes to grow faster, by feeding them fertilizer or oxygen. Natural microbes that like to eat oil are also added to sites to speed up the process. Today, commercial products used to clean up industrial oil spills, with names like BioZorb and EcoSolve, contain oil-eating micro-organisms, but their manufacturers haven't brought genetically modified micro-organisms into the marketplace.

"I can't imagine that you would get approval to use a GMO," says Jen Neve, a vice president at Oppenheimer Biotechnology in Austin, Texas, the makers of BioZorb. "A lot of the environmental departments around the world just don't want to even get into that, so you'll find that the permitting process to use a genetically modified organism might be a lot more difficult than for a naturally occurring organism."

The organisms sold in her company's products eat the oil, then eat each other, says Neve. "When there is no more oil to eat they eat themselves, and then there's just one microbe left, and he dies of starvation."

To date, the U.S. Food and Drug Administration has been very accepting of genetically modified plants produced for human consumption, marketed in everything from corn chips to soda. But the Environmental Protection Agency hasn't looked as kindly upon the nouveau critters.

"For the food, there is no mandatory testing. You can put a genetically modified food on the market without having to go through mandatory testing," says Sheldon Krimsky, a professor of science policy at Tufts University and the author of "Science in the Public Interest." "But the EPA has a much stricter set of guidelines for releasing a biological agent."

That's one reason that genetically modified organisms aren't the toxic-fighting superbugs and bacteria and plants that they've been promoted as -- at least not yet. "It's one of these things that was hyped in having great potential, but it never came to be. There's a lot of risks in releasing new self-replicating microbes into nature," says Krimsky. He points out that that genetically modified organisms have been used in "closed systems" to clean up toxins, but have not yet been approved for release into the natural environment for purposes of large-scale toxin cleanup.

"If you had a microbe that just did one thing, and after it exercised that order, it died like a Pac Man or something, that would be ideal, but generally it's hard to control." And unlike a plant, a bacterium cannot be released into the environment and then retrieved or snuffed out. If a new bacterium got out, and started mutating, it would be hard to put the genetically engineered genie back in the bottle.

A company seeking to bring genetically modified superplants or micro-organisms to market must be able to go through the regulatory hoops to make them commercially viable. So "there's a huge amount of research being done," says Fred Brockman, a staff scientist in environmental microbiology for that Pacific Northwest National Laboratory. "But," he added, "in regards to what are called field tests, there is very little going on."

Public fears feed on the idea that a new bacterium or plant may spread into the environment, like some kind of superbug that cannot be controlled. After it eats the oil, what will it eat next?

But scientists say that getting a genetically modified organism or any organism enough nutrients to grow enough to do the job that you want it to do is the more immediate challenge. Unless you can engineer a not-found-in-nature organism that doesn't need oxygen or water, self-limiting factors in the environment will usually keep it from gobbling up a whole oil spill, let alone mutating and taking over the world.

"That's why the superbug idea just hasn't panned out," says Kate Scow, a professor at the department of land, air and water resources at the University of California at Davis. "Because the environment is so unyielding. It just isn't going to oblige."

Still, scientists hope that public fears about genetically modified organisms running amok won't keep their discoveries in the lab and that they can at least go out into the field and test them.

"The scientific community has not been very good at getting the message out to the public," says Schroeder, the lead scientist on the UC-San Diego metal-ingesting-plant research. "It's even ironic that the products that are out there in the field today -- insect-resistant corn, cotton and soybean -- are also beneficial to the environment, because they require dumping of less toxic pesticides."