Get out of our kitchen!

They cook better, dress better and decorate better than we do. Death to all metrosexuals! 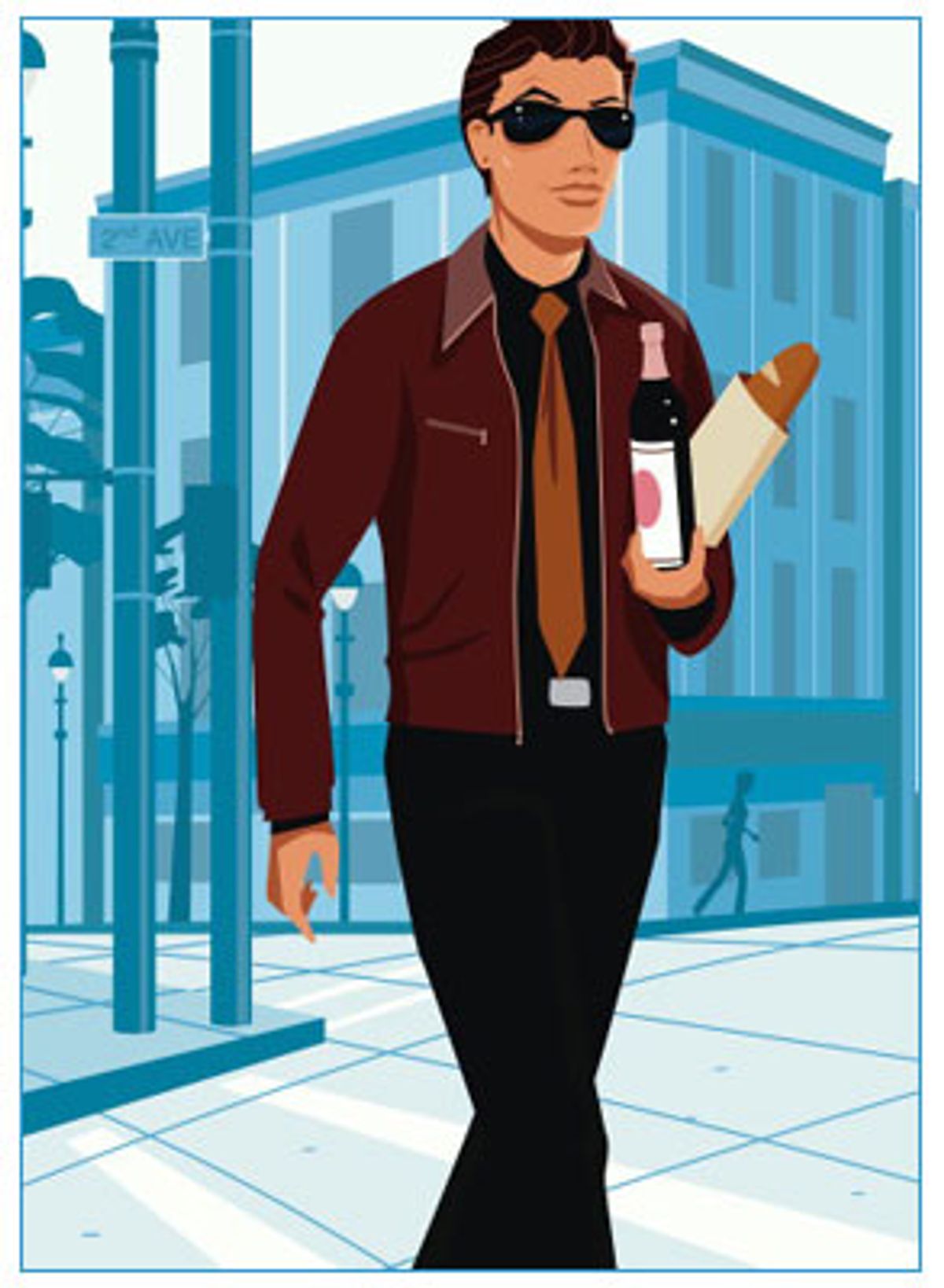 Date No. 4: the clincher. We've done the drinks, the red wine at the Italian restaurant, the official first kiss and all the obligatory sparring that comes with having taken our romantic cues from old episodes of "Moonlighting." Now it's time to show him just what a woman I really am; under the career-chick persona I'm actually just a warm and nurturing sweetheart, a girl.

All proceeds according to plan, after a cyclone rush of preparation: shower, chicken, salad, fruit, candles, wine, all in less than an hour. When Prince be-Charmed arrives at my door, he is met with decanted wine, organic strawberries, and the homey, reassuring aroma of chicken cacciatore wafting through the dimly lit apartment.

Zoom in a little closer, though, and the seams start showing: The candlelight is there to cast shadows on the floor I didn't have time to mop. And the candles themselves, white and gardenia-scented, were provided by my roommate's fiancé, a fabulous dresser with a thing for Biore bio-strips and Prada. The chicken cacciatore, a dish I can barely pronounce, much less prepare, is simmering over the stove courtesy of another male friend, a South African investment banker with a palatial apartment and an excellent palate, who planned the meal. And the idea for the dinner itself came from my neighbor, a straight musician who waxes his mustache, loves costume parties and helped me buy my last sundress.

Without the metrosexual, I am toast.

How did I ever get to this point? How did four decades of feminism and "independence" bring me to the point of needing him for guidance in all things culinary and cosmetic -- in other words, all things feminine? This new, supposedly benign incarnation of maleness -- the New Age sensitive guy suddenly morphed into a macho Armani-clad monster -- shops better, cooks better, decorates better and grooms better than I do. And if he's anything like my metrosexual friends, he's still macho, still chases after 23-year-olds, and still makes more money than I do, too. Where was I, while he was preparing his full frontal assault on my domestic turf?

Flashback to the 1970s. My salary-pulling, wheat germ-buying "Free to be you and me" singing single mom had one sure mission: to make sure her little girl would never be trapped in the kitchen. She herself was a fantastic cook -- so good at whipping dinner together from whatever she found in the kitchen that until I was 12 I thought "scratch" was a real ingredient. She knit, she embroidered, she gardened, but when it came to imparting this knowledge to me, she scoffed. I could be president, a fireman, a doctor, a rock star. There was no time to teach me women's work.

My role models were Charlie's Angels, Wonder Woman and my favorite Saturday morning heroine, Isis. They were tough and smart and pretty, but they were never seen basting chickens or mopping floors. And even though I hummed along to that Enjoli commercial: I can bring home the bacon/ fry it up in a pan/ and never let you forget you're a man, the actual bacon-frying part of the jingle didn't really register. I remember a lot of helping in the kitchen, but never actually managed to prepare a full meal from beginning to end. And as the '70s bled into the '80s and my new heroes were Joan Jett and Madonna, I absorbed everything about attitude and mugging tough, but nothing about fashion: After all, leather jackets, exposed brassieres and rubber bracelets do not a Vogue cover make.

By the 1990s, the battle between the sexes seemed like sort of a dead issue. Catwoman kicked Batman's ass on the big screen, Time Magazine declared 1992 the Year of the Woman, and I trotted blithely through my early 20s, racking up postfeminist credentials: the motorcycle license, the boxing classes, Wilderness First Responder certification. Guys thought it was sexy that I could kill a rabbit but couldn't cook one, and that my apartments looked like vacant warehouses. My old boyfriend, also the son of a single mother, made me dinner several times a week. At the time I was touched, but little did I realize that intentionally or not, he was refining and perfecting a strategy for future domination by homing in on my neglected domestic sphere.

By 1994 (the year, incidentally, that the term "metrosexual" was born, describing a tiny, tiny subculture, such a microscopic sliver of urban life that it could never pose a threat to anyone), while I dutifully avoided reading fashion magazines because I had been taught that they would lower my self-esteem, my old roommate Steven was stocking up on Details, Esquire and GQ, learning how to stuff sea-bass and steam-iron his delicates. He was the one who first broke the news to me that the cocktail dress and cowboy boots look was out, who introduced me to self-tanning lotion, who tried to teach me how to caramelize walnuts, whose quest for the woman of his dreams is rivaled only by his quest for the perfect couch. When we lived together in the mid-'90s, he kept the place clean, he bought flowers for the living room table, and he certainly dressed better than either myself or our third roommate, a gay man who always sniffed, "Steven's the real fag in the house." We thought Steven was a big dandy. Turns out he was just an early adopter, a proto-metro.

Do I sound like I feel threatened? Hell, yeah -- according to the myths I was raised on, the battle was over, and the women had won. Girls were excelling at math, while boys were shooting up schools. Books like Faith Popcorn's "Shevolution" and Susan Faludi's "Stiffed," the advertising world's discovery that women held the purse strings, Robert Bly's chest-thumping Iron John stories, movies like "Fight Club," in which the men complained about feeling emasculated and beat each other to a pulp to prove they were tough ... all these elements conspired to lull me into a false sense of security. Women were doing just fine, and the men were ... adjusting. It seemed that now that we could do everything they could do, our only remaining task was to learn how to wield our newfound superpowers with elegance, to let men know that yes, they were still necessary, that even though we didn't need them anymore, we still really liked them: There would be room for them in the new female-led world order.

But while we were analyzing and weighing the spoils of victory, the men were launching a stealth campaign of their own. They copped our domestic flair, copped our products, even copped our eating disorders.

Ladies, behold the metrosexual, and tremble. Today it's hair gel, tomorrow it's the whole Nordstrom's makeup floor. Soon there will be football games blaring at Williams Sonoma and back issues of Gear crowding the magazine racks at the waxing salon. He won't be cheating on you with his secretary, but with his manicurist.

Last week on the train, late for work, not yet made up, hair haphazardly pulled into a pony tail, I ran into an old acquaintance from college named Ryan, a self-avowed player, and a self-avowed "Queer Eye for the Straight Guy" fanatic. He looked like a dream, with perfectly arched eyebrows, shiny brown hair and a supple, dark-suede jacket that accented his gray-green eyes. I asked him where he got it, and he lowered his voice and whispered the name of a designer outlet store just blocks away from my office which I of course, had never heard of. Then he told me about a new recipe for braised beef, sautéed asparagus and sautéed shallots he was working on. As the crowded train lurched forward and I was thrown against him, my mouth began to water. But was it lust for the man, or lust for the shallots? Either way, now that the dust has settled on the Queer Eye explosion, I want my own makeover on Bravo.