"Once Upon a Time in Mexico" 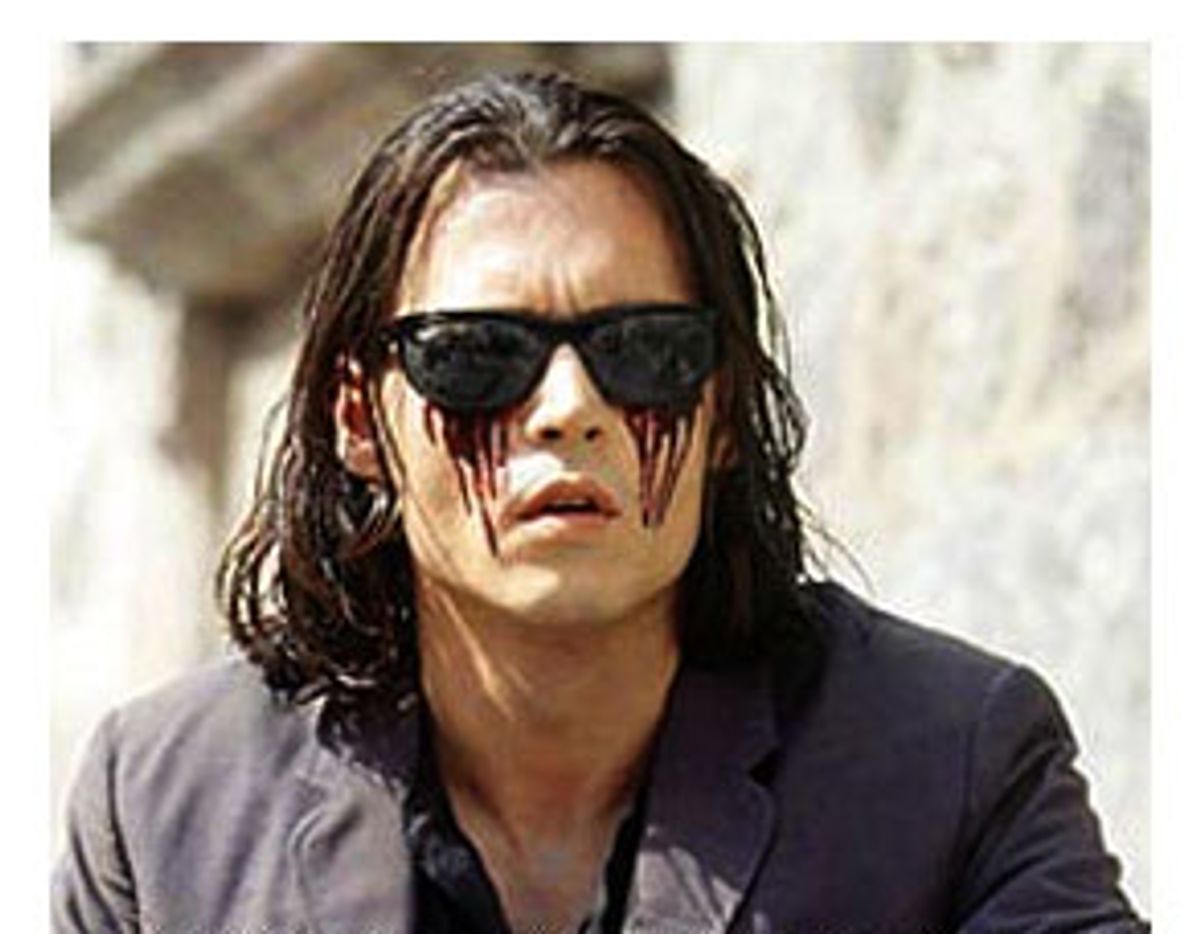 Roll over, Sam Peckinpah. Make some room at the bar, John Woo. There's a new action-movie gunslinger in town. He's got a guitar. He's got a gun. (Well, a lot of guns.) He's a loyal son of Mexico. (Que viva México!) He's living la vida loca.

Sorry -- I'm getting a little carried away, which might be a common reaction among viewers of "Once Upon a Time in Mexico." Make no mistake, this movie is a mess. But, wow, what a mess! It's an exploding piñata, full of low comedy and high drama, deliriously colorful fight scenes and vehicle chases. It's pseudo-Latin high camp that transcends itself, becoming a passionate love letter to its director's ancestral homeland. It's farce that becomes tragedy, or maybe it's farce and tragedy at the same time. It's pure escapist entertainment and it's devastating political allegory. It's got Johnny Depp, in another of those roles that make you realize he's tuned to a different frequency than any other actor on the planet. (A friend of mine says he's become the Jack Nicholson of his generation, which about sums it up.)

Of course the action-movie gunslinger I'm talking about is writer, director and all-around maniac Robert Rodriguez, and he's not actually new. As anybody who has followed his extraordinary career since the zero-budget "El Mariachi" a decade ago already knows, he's one of the most enthusiastic and unjaded talents to hit pop cinema since the 1970s. At first, Rodriguez was viewed as a sort of Latino offshoot of Quentin Tarantino, which was never fair. They're close friends, and the simpatico nature of their aesthetics was obvious from the beginning, but Rodriguez seems to me like an unstoppable force of nature. I suspect he'd be doing exactly what he's doing now even if Tarantino had never been born. (Whether he'd have found a large audience is another question.)

Rodriguez moved into the mainstream in 1995 with "Desperado," which was sort of a remake of "El Mariachi" and sort of its sequel (and went a long way toward making Antonio Banderas and Salma Hayek into Hollywood stars). Then he made a couple of cult horror hits, "From Dusk Till Dawn" (from a script by Tarantino) and "The Faculty" (scripted by "Scream" whiz kid Kevin Williamson). After that, Rodriguez blasted his way out of the pop-hipster movie ghetto by making three movies for children, the delightful "Spy Kids" series, which established him as one of the unlikeliest Hollywood hitmakers of all time.

"Once Upon a Time in Mexico" marks the fulfillment of a promise Rodriguez apparently made to Tarantino, who suggested that his series of movies about El Mariachi, the guitar-strumming lone-wolf hero played by Banderas, needed a concluding chapter -- and also an even more explicit comparison to Sergio Leone's "spaghetti westerns" of the '60s. But this crazy, screwed-up, massively enjoyable movie stands on its own, like a sudden endorphin jolt at the end of a Hollywood summer of rehashes and disappointments. You don't have to have seen Leone's "The Good, the Bad and the Ugly" or "Once Upon a Time in the West" or Peckinpah's "The Wild Bunch" or Howard Hawks' "Rio Bravo" (another point of reference) to understand that Rodriguez makes movies for one reason, and one alone: He loves them.

The joy is contagious, too. At some point early in "Once Upon a Time in Mexico" -- it might have been right around the time that Johnny Depp gave Cheech Marin $10,000 in an old "Clash of the Titans" lunchbox -- I put down my pen. I didn't want to be an observer anymore; I didn't want even to pretend to be outside the movie. I just wanted to surf the thrills and chills, the cheap gags and mythic confrontations, the glorious Mexican scenery, the flowers and the bloodshed.

Here's Depp, playing some sort of reject ultra-supercilious CIA agent who's been banished to the boonies south of the Texas border, wearing a tricky prosthetic arm and a sequence of ridiculous "disguises"! (A T-shirt that says "I'm With Stupid" -- arrow pointing toward crotch -- worn with a cannabis-leaf belt buckle.) Here's Mickey Rourke, as a drug lord's embittered flunky, always petting a hideous little Chihuahua! Here's Willem Dafoe as the drug lord, wandering around after botched plastic surgery looking like the Frankenstein monster before the bandages come off! Here's the soulful, smoldering Banderas, who must reunite his team of mariachi gunmen (including Latin music superstar Enrique Iglesias) to avenge himself on the scumbag general (Gerardo Vigil) who destroyed his family!

Deliberately mirroring the almost unintelligible plots of Leone's operatic films, "Once Upon a Time in Mexico" concerns a Byzantine scheme to assassinate the Mexican president and stage a coup, which I couldn't really explain to you (or to myself) without a chart. Despite Depp's cocksure pronouncements -- "I restore balance to this country" -- his Agent Sands is almost exclusively an agent of chaos, bringing death and destruction behind him like a Horseman of the Apocalypse. (Which, come to think of it, is a pretty apt description of the United States' repeated interventions in Latin America.)

Sands wants to use Marquez's planned coup attempt to bring down Dafoe's narcotraficante -- and then use El Mariachi's lust for vengeance to destroy Marquez. These might, in general terms, be laudable goals, but Sands also doesn't mind popping the odd civilian along the way, as part of his plan to restore balance to Mexico. Then there's the aging gunfighter coaxed out of retirement, in this case a former FBI agent (Rubén Blades) with an expired I.D. card and an unloaded gun, whom Sands talks into going after Dafoe's drug lord. But is Sands misjudging the sexpot Mexican federal agent (Eva Mendes), who's as seductive, and as evil, as an acrid midnight shot of mezcal?

Hardcore fans of "El Mariachi" and "Desperado" will no doubt be disappointed that Banderas' role here is relatively limited, and that Ms. Tropical Eye Candy herself, Salma Hayek, only appears in a few dazzling flashback adventures, for reasons that rapidly become obvious. But while "Once Upon a Time in Mexico" still isn't a big-budget spectacle by Hollywood standards -- Rodriguez is not just the writer and director but also the cinematographer, the editor and the production designer (and he composed the score) -- it's more than a gas-and-go action movie shot on the cheap. This is a sprawling epic allegory on a scale Rodriguez has never attempted before, and if it doesn't all work on every level, he nonetheless has a remarkable ability to find a core of meaning in even the campiest moment -- and, for that matter, to find human comedy amid the horrible and grotesque.

Despite the billing, the star here is really Depp, not Banderas, and the great accomplishment of both actor and director is to make this thoroughly ugly American, blundering around in a culture he only incompletely understands, first into a comic figure and finally into a moving and almost a noble one. I won't tell you what happens to Sands (if you've read much about the movie, you already know), but his blithe norteamericano spirit remains unvanquished despite his mythic and terrible fate. Of course "Once Upon a Time in Mexico" is primarily a bang-up entertainment. But it also feels to me like a personal reckoning for Robert Rodriguez, his confrontation with the fact that despite his ties to Mexico by blood and spirit, he's an American too.