Out of the aeroplane into the sea

It's been five years since Neutral Milk Hotel released their masterpiece and disbanded. With the arrival of the Decemberists, have indie-rock obsessives (like me) found a new mannered, quirky band to love? 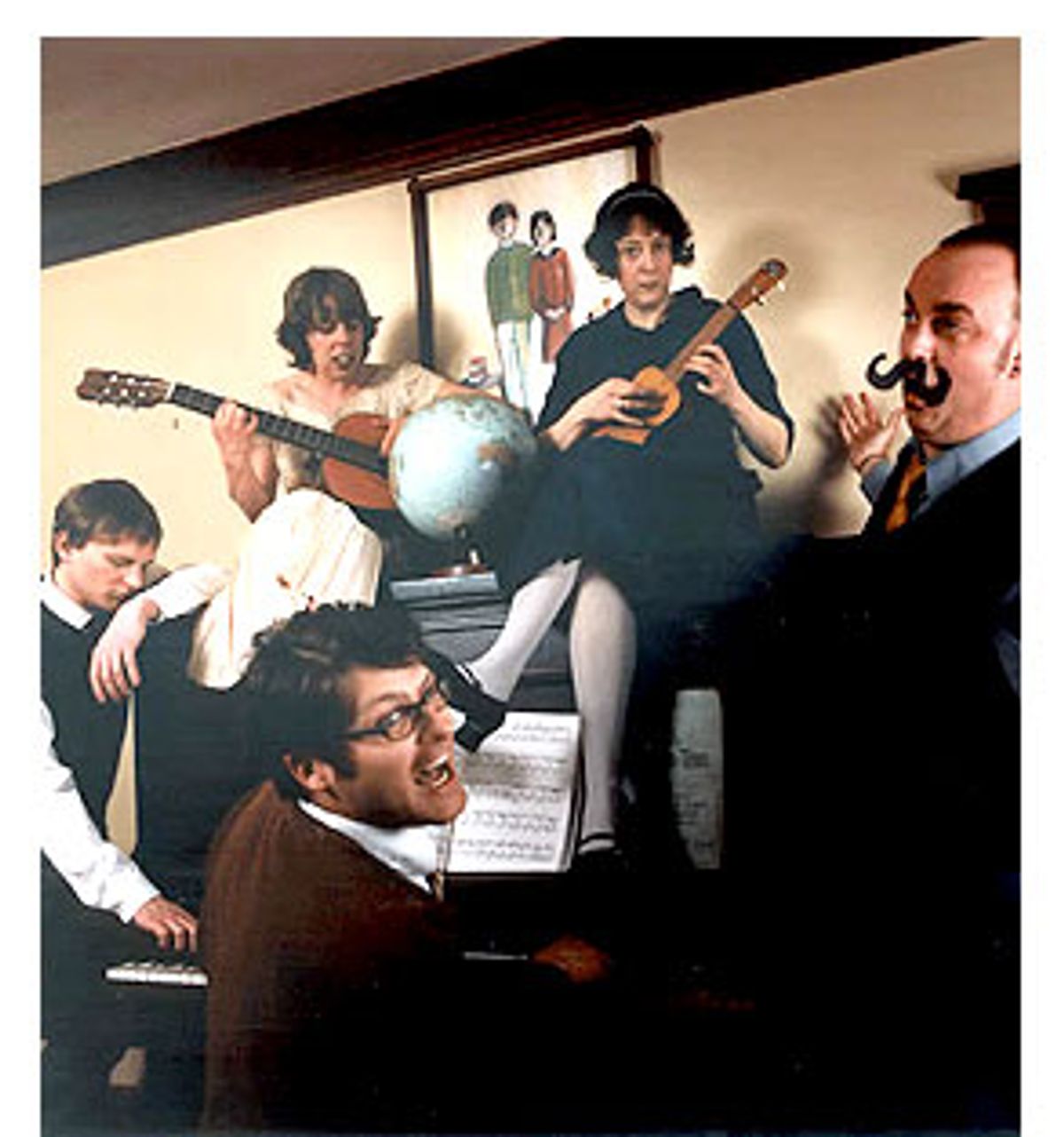 The Decemberists, a band from Portland, Ore., have been releasing music for two years, but it took until this summer's rerelease of the 2002 album "Castaways and Cutouts" for them to form a blip on the national radar. Fresh off a wave of critical acclaim for that record, mostly revolving around Colin Meloy's charming dime-novel caricatures, comes the follow-up, "Her Majesty, the Decemberists." There's no doubt that Meloy is a new voice. Critics have compared him to a whole shooting gallery of creeped-out outsiders, from artist Edward Gorey to the Kinks' Ray Davies. But one sticks particularly.

I have an instant affection for Meloy and the Decemberists. And the reason for my instant affection, which is admittedly unfair to all parties, is that they uncannily resemble an entirely different band: Neutral Milk Hotel. And it's not that the Decemberists merely remind me of Jeff Mangum's now-defunct outfit -- they sound like them right down to the smallest of mannerisms: the nasal faux-English accent, the ragtag marching rhythms, the fascination with the Old World, the songs about dead European girls. It's forgivable, because it doesn't sound exactly intentional. It also makes me open myself to their new album more than I would otherwise. Maybe too much.

On one hand, I could rationalize my attraction by saying that I am interested in the Decemberists for the same reasons I was initially interested in Neutral Milk Hotel. But, really, that's not true. Jeff Mangum hasn't made an album of new music since "In the Aeroplane Over the Sea" in 1998. "Aeroplane" is as perfect and autonomous a record as ever has been made. One need not know anything about Neutral Milk Hotel's previous history to understand it. (Though dealing with their later story frequently becomes a large part of one's experience with it.)

There's nothing overtly difficult about "Aeroplane." In fact, the melodies and chord changes are almost instantly familiar: simple songs constructed out of the most obvious progressions. Parts are, that most hoary of clichés, Beatle-esque. Still, the album doesn't quite sound like anything else ever recorded. The songs swim with surreal scenes. "Cocoa leaves along the border/ Sweetness sings from every corner/ Cars careening from the clouds/ The bridges burst and twist around," Mangum sings in a typical verse.

From the lyrics spring the production and the arrangements: elegantly mournful horns bursting in bittersweet bouquets across a sky of crackling sheet noise, melodies streaking by from singing saws, accordions and zanzithophones. And Mangum's voice, soaring warmly adrift in this completely bizarre world. The album is even mixed differently -- the levels are cranked up just hotter than normal -- which makes listening to it that much more immediate. The experience of "Aeroplane" is cathartic: noise breaking down one world while Mangum's voice reinforces another.

Just as "Aeroplane" doesn't sound like other records, listeners don't relate to it like other records, either. A word that shows up time and time again in fans' testimonials is "healing." Instead of comparing it to other albums, listeners frequently cite deep-seated upheavals and realizations -- broken love affairs, suicides, dying relatives. Which is perhaps why, five years after Neutral Milk Hotel last set foot on the modest club stages they made their home, people still care deeply about "Aeroplane." The album continues to sell briskly. After all, it takes time for associations to build up. In its 10th anniversary issue, Magnet voted it the best album of the past decade, above Nirvana's "In Utero" and Radiohead's "OK Computer," William Bowers calling it "indie rock's 'Amazing Grace.'" The Atlanta alt-weekly Creative Loafing recently devoted a cover feature to the album.

Naturally, one goes looking for more. Maybe that's just the nature of living in an art world driven by commerce and progress -- one always instinctively searches for the next step. There is no more, though. At least not yet. A year after "Aeroplane's" release, as the story goes, Mangum got sick and, well, just sorta disappeared from public life. Right now, he's off living in Halifax, Nova Scotia -- or maybe in Brooklyn, N.Y. Not even his friends seem to know for sure. No matter where he is physically, he's surely made his own world. And, for now, that means no music. Understanding this seems an inevitable, even beautiful, part of a listener's relationship with "Aeroplane."

My own story with "Aeroplane" has several chapters: It was the music that cooed me to sleep, jobless and groundless, after graduating from college; the music that propelled a friend and me to Athens, Ga., on a vague search for Mangum and his compadres in the Elephant 6 Recording Company; the music that encouraged me to start futzing with my roommate's four-track, recording wineglasses and the kitchen sink; the music that became the high-stakes mirror for a two-year nonrelationship (and inspiration for a creative collaboration).

It was the latter that seemed to come to a conclusion this summer, as I heard "Castaways and Cutouts," the Decemberists' 2002 debut, for the first time, and I got involved with somebody else. "My name is Leslie Ann Levine," frontman Colin Meloy sang as the album opened. "My mother birthed me down a dry ravine." It was the voice, Mangum's voice, pinched and assured, and it was like suddenly remembering a dream. Instinctively, I searched for the same sort of cosmic tendrils that lashed me to "Aeroplane" and the girl. They seemed a necessary component of a meaningful relationship.

One confused morning after, I listened to "Aeroplane" on the subway ride home, and arrived at my apartment to find the Decemberists' sophomore effort in my mailbox. Listening bleary-eyed, and feeling the need for emotional resolution, I was struck by a horrible sense of guilt. the Decemberists seemed less like a dream and more like reality, and I felt like I was cheating -- not on somebody I was ever actually in a relationship with, mind you, but on a goddamn album. And that felt even more stupid and unhealthy than the initial feeling of guilt. So it goes.

It left "Aeroplane" pleasantly unsullied, but it gave pathetically short shift to the Decemberists (and, by extension, anybody new in my life). After all, it is plumb unreasonable to criticize the Decemberists for not being Neutral Milk Hotel, or to evaluate one person on the basis of another. To be fair, "Her Majesty, the Decemberists" sounds considerably less like "Aeroplane" than its predecessor. More important, it's a really wonderful album, precisely on its own merits.

If Mangum seemed as if he was transmitting from the unconscious, like a surrealist engaging in automatic writing, then Meloy is a meticulous short-story writer. Both of these stances are consciously employed effects, to be sure, neither more nor less authentic than the other. There is a sense of haphazard inevitability to Mangum's music and a sense of careful ordering to Meloy's, and this subsequently affects the listener's level of engagement. Like an author dressing a scene with finely described props, the Decemberists' arrangements are pure suggestion. Where ambient theremins and "Aeroplane"-like crackles served "Castaways and Cutouts," organ drones, whispered strings, and all manners of bells populate "Her Majesty."

This in itself isn't much of an achievement. It's what is meant these days by the term "well-produced." Except that the extras all adhere to a gently macabre, very original aesthetic, structurally sketched by Meloy's lyrics and percussionist Rachel Blumberg's resolutely pre-rock rhythms. The latter are subtly inventive, prodding the music along with quiet insistence (such as the muted march of "The Gymnast, High Above the Ground"). The former are decidedly surreal, with more than a hint of Mangum ("Seraphim in seaweed swim where stick-limbed Myla lies"), but seem more actively written than pulled whole from a subconscious, more functional in the real world than describing a dream state.

Indeed, there are places where Meloy oversteps in describing the world, emphasizing antiquated language for its own sake ("pantaloons" and "dungarees" make appearances in "The Soldering Life"), or delves into plain cutesiness, such as the show-tuney (though endearing) "Chimbley Sweep." For this, Meloy and company might be dubbed "literate." They are, though not because they make smarty-pants allusions to Russian revolutionaries (their band name) and haunting authors ("Song for Myla Goldberg"), but because they are so self-aware. "Here's a plaintive melody/ A truncated symphony/ An ocean's garbled vomit on the shore," Meloy sets up, before delivering the punch line, shooting the listener unashamedly into glittering modernity: "Los Angeles, I'm yours."

This awareness might be taken for mannered restraint, and that is both what makes the record enjoyable and what might prevent it from becoming a revered document, à la "Aeroplane." "Her Majesty, the Decemberists" is not the key to a new and weirder life -- but then, not much is. For that matter, it doesn't try to be. "Aeroplane" is a high-stakes record. It works for some, and it could be considered one pretentious-ass slab o' music by others. It's hard to listen to without noticing its ambitions.

For those obsessed with (or possessed by) "Aeroplane" -- that is, for me -- "Her Majesty, the Decemberists" might well be a lesson in what to do afterward, the day-to-day life following an astonishing dream. Just as one might unconsciously attribute dream actions to real-life acquaintances, Colin Meloy and the Decemberists point backward to Jeff Mangum and Neutral Milk Hotel. It is not wrong to expect things out of bands or albums, but it is dangerous -- falling in love with somebody who might be incapable of loving you back. But when they do, it's wonderful. Especially albums. Such love is unconditional, and doesn't go away.

Mangum's absence has only made "Aeroplane" that much more untouchable. The night I received "Her Majesty," I ventured back into Manhattan from Brooklyn, where I live. I took the long way back to the subway as I listened to it, detouring down St. Mark's Place. There, sitting at an outdoor cafe, was Neutral Milk Hotel's Julian Koster, smiling broadly and enjoying the late summer evening. I quickly pushed the headphones off my ears, stunned by the surreality of the moment and, again, with guilt. Of all the issues to be raised by pop music, guilt should not be one of them.

The simple moral is that not everything has to be high stakes. The oblique cleverness of "Los Angeles, I'm Yours" might be Meloy's writerly lesson in a nutshell. One imagines him walking quixotically through the sprawl, places and people transforming into "a city by the sea/ A gently company." "Its streets and boulevards/ Orphans and oligarchs," he sings. And if oligarchs, then why not singing saw players?

Jesse Jarnow is a writer, artist and musician in Brooklyn, N.Y.