By any reasonable standard, this dark vampire epic -- all massive overacting, cologne-commercial design and sexy cat suits -- sucks. But at least it gives a crap. 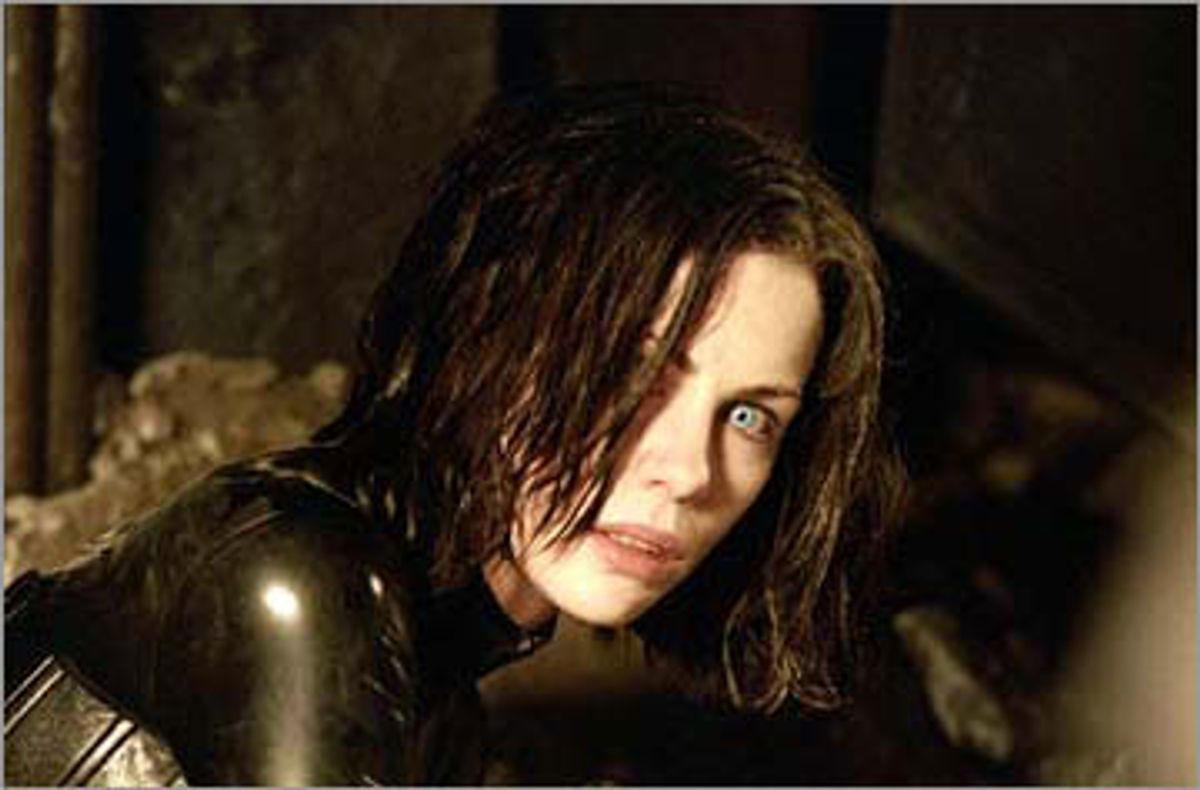 "Underworld" is a dark, dank morass of a horror/fantasy epic, all faux-Wachowski action scenes and dim blue light and thumping industrial music and dripping pseudo-Gothic interiors and Kate Beckinsale cramming her cute English schoolgirl figure into a pleather cat suit. (Nobody's complaining about that!) It's trying to be "The Matrix" and "The Lord of the Rings" and Anne Rice's Vampire Chronicles and "Romeo and Juliet" all at the same time, and it isn't 10 percent of any of those things. It has absolutely no sense of humor (at least not on purpose) and features some of the worst hambone acting this side of William Shatner. Basically what I'm saying is that by any reasonable standard it sucks.

But who cares about reasonable standards? Behind all the overcrowded pomposity of the story, the monsters out of some fanboy video game and the semi-arty, cologne-commercial design, you get the unmistakable sense that director Len Wiseman and screenwriter Danny McBride actually gave a crap. "Underworld" may be ludicrous; it may pack too many geek-fantasy elements into one package; it may really not work at all. But it's nowhere near Hollywood's usual condescension to the fantasy audience, which may mercifully, in the post-"Rings," post-"Harry" era, be a thing of the past.

If anything, "Underworld" is an overly detailed slice of a new fantasy universe, one just as concerned with delivering a convoluted saga as with chills, thrills, ass-kicking and vampire babes in bodices and cat suits. If this story doesn't bloom into a new franchise, it sure won't be for lack of trying. From the first moments of the film, when Beckinsale rushes through a bewildering voiceover narration and then plunges into an extended subway gun battle where we can't tell who is who or what in hell is going on, the filmmakers are unafraid to set us a steep learning curve.

What makes this different from random genre crap like "Ballistic: Ecks vs. Sever" -- movies where the action is totally confusing and it seems like no one with a brain ever bothered to read the screenplay -- is that in "Underworld," for all its flaws, the story has been meticulously worked out. Wiseman and McBride are indeed plunging us into the middle of the action without much explanation -- into the middle of an eons-long war between the Vampires and the Lycans (i.e., werewolves) that neither side really understands and that shows no signs of abating.

Selene (Beckinsale) is both a vampire and a "death-dealer"; she ambushes and kills Lycans because she has been trained to do it for centuries, and she has never found any reason to question the tradition and training of her tribe. At least, not until now. She lives among a coven of vampires in a brooding old mansion at the edge of town, where beautiful undead boys and girls lounge around on the Victorian furniture like models in a "Fashions of the Times" spread. Heading the gang of bloodsuckers is a shallow, square-headed schemer named Kraven (Shane Brolly), who, as his name might suggest, is unworthy to uphold the grand tradition of big chief vampire-ness. He appears to have forged a secret Hitler-Stalin-type pact with Lucian (Michael Sheen), the stringy-haired Jesus lookalike who runs the local den of Lycans in some slimy urban cavern (and who is supposed to be dead but isn't). All this is happening in one of those decrepit, half-imaginary cities that contemporary filmmakers love so much, basically the same place where "Se7en" and "Fight Club" and "City of Lost Children" and the early scenes of "The Matrix" are set. (In this case it's actually Budapest.)

This entire movie is full of campy overacting, but Brolly and Sheen seem to have been selected for their talents in this regard. Sheen prances around giving one of those line readings where one word is ridiculously overstressed ("You're acting like a pack of wild DOGS!"), and he looks distressingly like the female-to-male backup singer in "Hedwig and the Angry Inch." But he's Cary Grant compared to Brolly, an Irish actor whose muddled accent got drowned in the Atlantic and who spends the whole movie seething and gnashing his teeth. Those hemorrhoids are driving him insane!

Whether the contrast is deliberate or not, Beckinsale's icy English composure creates a sense of stillness at the center of the general art-directed chaos of "Underworld." The Lycans have developed special vampire-killing bullets using ultraviolet light! (That is, sunlight in ballistic form -- a nice touch.) So the vampires fight back with special silver nitrate bullets that make the werewolves wither up and die! (Ordinarily, the Lycans can just sort of swell up like bee-sting victims and expel bullets from their bodies, an especially cool effect.) And why are the Lycans so intent on capturing -- and werewolf-izing -- a clueless beefcake human named Michael Corvin (Scott Speedman)? Could he be the inheritor of some rare genetic werewolf-vampire whatsit that will, well, do something or other?

To some extent, "Underworld" is supposed to be the story of how Selene falls in love with Michael, who is completely off limits because he's: 1) a regular old lowly human and 2) possibly not human but actually a Lycan, which is worse. But although it's especially satisfying when Michael, once bitten by Lucian, begins to understand the tortured origins of the Lycan-vampire war (thereby filling us in at last), there's no real chemistry between Beckinsale and Speedman, who barely even kiss. Speedman is handsome, all right -- in the mild, sweet manner of a frat boy who actually believes the organization is about community service -- but he never feels well-matched to Beckinsale's cool, translucent beauty.

Just as "Underworld" begins in the middle of the story, it also ends without a real conclusion. I don't know if this is a weakness or a strength, but Wiseman and McBride are brazenly betting they'll be able to make more chapters. Selene awakens the forbidding Viktor (Bill Nighy), the slumbering vampire lord, in order to defeat Kraven, and then must face her conflicted feelings about him (Viktor's the one who bit her and made her undead in the first place). Michael is transformed into some kind of vampire-werewolf-Incredible Hulk hybrid creature, but instead of bringing an end to the endless war, his arrival seems to make things worse. The funny thing about all this is that a half-hour into "Underworld" I couldn't wait for it to be over. When it really was over, I couldn't wait for the next installment. Go figure.