With his comic book masterpiece "The Sandman" and his instant-classic children's horror tale, "Coraline," Neil Gaiman has established himself as today's master of fantasy. 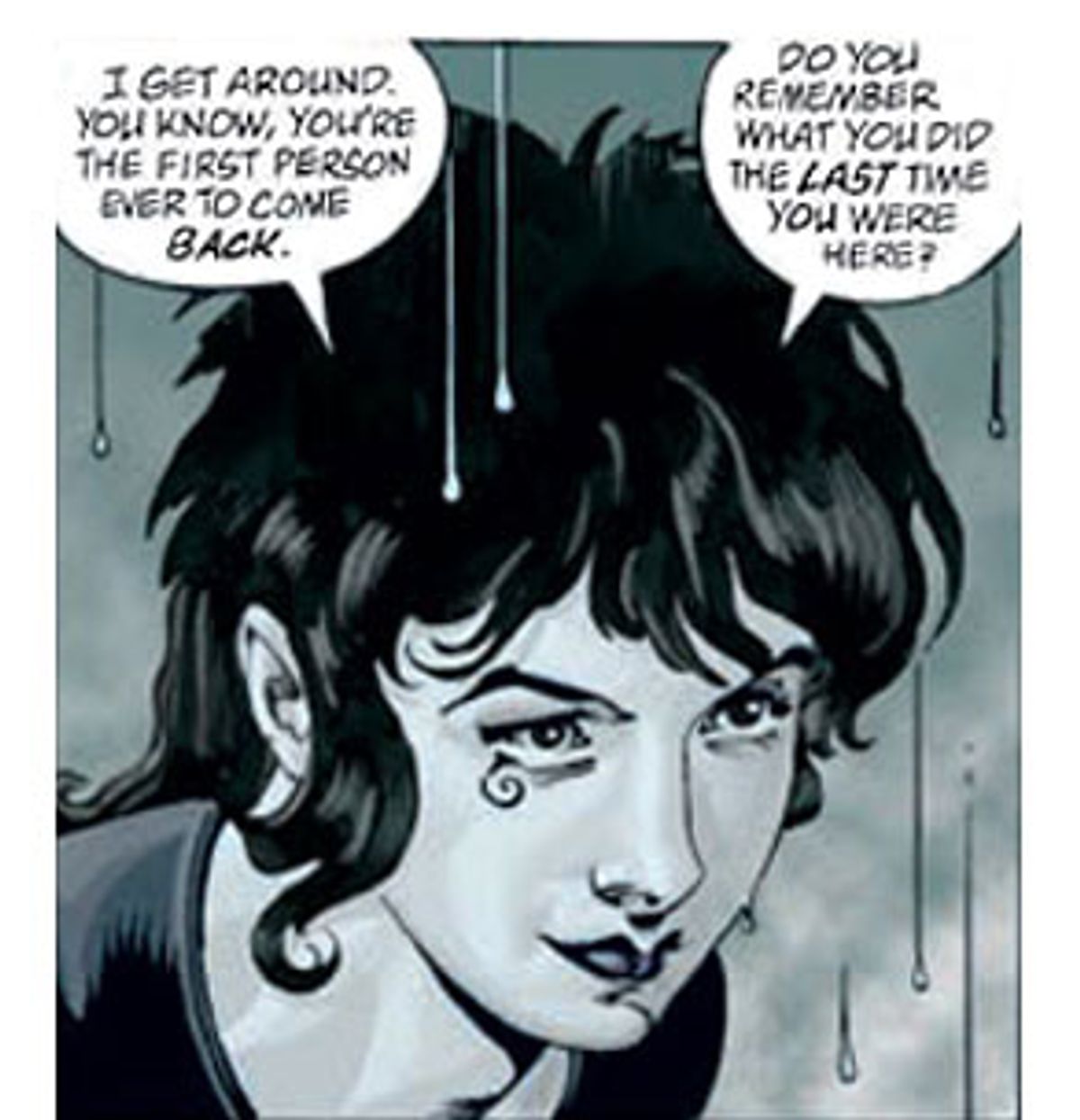 I stumbled into the strangely familiar and familiarly strange universe of Neil Gaiman's writing through a side entrance of sorts, the novel "Neverwhere," which is based on a miniseries Gaiman created for the BBC. "Neverwhere" is the story of Richard Mayhew, a young, mild-mannered financial analyst whose life is transformed when he helps out what appears to be a homeless girl on a London street. That encounter sucks Richard out of London Above, the relatively sane, safe world he previously inhabited, and into London Below, a very dangerous subterranean netherworld in which tube station names become literal (a monastery at the Blackfriars stop, etc.) and rats are distinguished personages. Like Gaiman's fiction, London Below is a realm of wonders and terrors with a taproot running deep into the underworld of the human psyche.

The high road to Gaimanland, however, is "The Sandman," a comic book series compiled into a 10-volume set of graphic novels (plus ancillary books). To people who care about comics, "The Sandman" needs no introduction; it is a beloved, seminal work that bridged the gap between the form's pop mainstream and its experimental fringe.

But, to be blunt, I'm not someone who cares much about comics. Despite having read and admired works by Art Spiegelman, Los Bros Hernandez, Alan Moore, Chester Brown, Chris Ware and others, I still belong to that tribe of readers who'll pick a thousand words over a picture any day. I never would have sought out "The Sandman" if I hadn't already been enchanted by "Neverwhere," "American Gods" (Gaiman's 2001 novel for adults) or the sublime "Coraline," the children's book he published last year.

Since those last two titles both hit the New York Times bestseller list, I'm surely not the only reader to first fall in love with Gaiman's imagination via the medium of plain prose. Somehow, though, he hasn't quite registered on the public's consciousness as decisively as he ought to. He is, as one journalist put it, the famous author you've never heard of, a baffling fact in the age that made J.K. Rowling its darling.

Perhaps it's Gaiman's comics background that puts some people off, a prejudice in danger of being cemented by the publication this month of "The Sandman: Endless Nights," a collection of graphic stories based in the Sandman universe. But Gaiman's ongoing fondness for the medium shouldn't discourage comics-wary readers from exploring his work; instead, the appearance of "Endless Nights" should be the occasion for confirmed prose junkies -- Gaiman aficionados and novices alike -- to make a foray, however brief, off the reservation. Trust me, it's well worth the trip.

To newcomers, "Endless Nights" on its own probably won't convey the allure of the Sandman epic. It's a lovely hardcover collection, illustrated by some major artists in the field, but it feels a bit like a commemorative souvenir program to the main event. DC Comics' arty imprint, Vertigo, makes the whole Sandman series available in 10 paperbacks, and that's the place for novices to dive in, with Volume 1, "Preludes and Nocturnes." Stick with it through Volume 2, "The Doll's House," and you'll be hooked.

Gaiman sees himself as part of the age-old profession of storytellers, but unlike a lot of the tiresome people who go around referring to themselves that way, he's right. His fiction, in its various media (he also writes screen- and radio plays), induces that blissful, semi-hypnotic state most of us first experienced as children, when the power of a book seemed to erase the world around us, and when reading felt almost like a drug. Gaiman is interested in all the traditional forms of storytelling -- legends, folk and fairy tales, myth -- and not just in the stories themselves, but the ways they get told. Not surprisingly, the hero of the Sandman epic is Morpheus, the King of Dreams, who also presides over stories.

Gaiman certainly wasn't the first comics writer to draw on ancient myths, but he could be the first to really understand how myths work, not just as motifs but as nodes of meaning that gain new layers as we attach new experiences to old stories. For example, the Egyptian god Osiris, the Norse god Balder, Jesus and John F. Kennedy are all very different figures and yet -- in some fundamental way having to do with how we understand them -- also the same. As the British writer C.S. Lewis (a major influence on Gaiman) pointed out, a myth is a story that can be told and retold in very different ways and yet remain essentially intact. There is no original or correct version of the Orpheus myth, just countless ways of revealing it, and even people who haven't heard the traditional Greek version recognize it as something powerful when they meet it in another form.

Gaiman's fiction is teeming with gods -- most memorably the has-been deities eking out a meager living in the contemporary United States of "American Gods" -- but Dream isn't one of them. He's more of an embodied principle of existence, one of seven siblings, the Endless, who also include Destiny, Death, Desire, Despair, Destruction and Delirium. There's a real danger of ludicrous grandiosity in this premise, but Gaiman counterbalances all the metaphysics with a quotidian funkiness. On one page the Sandman may be facing off against Lucifer in Hell, but soon enough he'll be sulking at a family gathering or bickering with Desire, who thinks he's a humorless stuffed shirt.

Perhaps Gaiman's most popular creation is Dream's older sister, Death, an adorable, ankh-wearing punkette who kindly leads the newly deceased to their fate. Death is the sensible, peace-making, considerate sibling among the Endless, and when she first appeared in the comic's eighth issue, she became an instant hit. As Dream sits glumly in lower Manhattan's Washington Square Park (he's in the doldrums after completing a major quest), she shows up to give him a good talking-to, accusing him of being "the stupidest, most self-centered, appallingest excuse for an anthropomorphic personification on this or any other plane."

"The Sandman" keeps doing this, balancing the callow satisfactions of conventional genres with a playful argument against the kind of personality that makes someone obsess about such things to begin with. At its most limited, pop culture directed at men is a shabby little tango between fantasies of mastery and self-pity ("Only I can save the world, and yet I can never truly be part of it" -- that sort of thing). Gaiman can play that tune, but he keeps introducing new and more challenging partners and steps.

Morpheus, for example, is the epitome of late-adolescent Goth cool, a gaunt, chalk-skinned, ebony-haired hipster who can brood with the best of them -- plus he has superpowers! Yet the entire Sandman epic is also an elucidation of Morpheus' emotional and personal failures (romantic as well as familial), culminating in his recognition of his own isolation and obsolescence. Similarly, "Neverwhere" is partly an old-fashioned boy's adventure story, but the hero is neither especially brave nor notably gifted, just an ordinary fellow whose only sterling quality is kindness. Gaiman the author points his readers toward a richer, more grown-up way of understanding life and stories than that offered by tortured superheroes, alienated loners or strapping champions. Some say that Morpheus looks a bit like his creator, but Gaiman's secret twin is Death, a witty, charming escort to the next stage of our existence.

For Gaiman, one of the chief uses of enchantment is not to escape from the real world, but to illuminate it. In "Neverwhere," when Richard, by association with its scruffy denizens, joins the world of London Below, he also becomes, if not quite invisible, at least profoundly unmemorable and radically unremarkable to the inhabitants of London Above. That's only a slight tweak on the actual world: I walked past a homeless man yesterday who held up a sign reading "Everyone ignores me." He lives in New York Below.

Much of what passes as fantastic literature these days doesn't maintain any fertile relationship with the real. Even the classic works of British fantasy that Gaiman uses as touchstones, the novels of Lewis, J.R.R. Tolkien and G.K. Chesterton, to name a few, feel insular, like retreats from the world into an imaginary realm untouched by modernity. Gaiman, on the other hand, is ever eager to expand his compass and take in everything, the new mixing exuberantly with the old. "The Sandman" contains everything from vamps on old-time horror comics, to ersatz (but convincing) African folk tales to references to the devastation of the first Gulf War to snapshots of urban life featuring single mothers, transvestites and a touchingly devoted pair of lesbian lovers. In "Neverwhere," London's Tube becomes as mysterious, romantic and perilous as Olde England's Forest of Arden.

Nevertheless, Gaiman has never lost touch with the spellbinding voice of classic British fantasy. He reproduces it perfectly in "Coraline," his most polished piece of writing yet, as far as prose is concerned; every sentence is distilled to its essence. Gaiman, like Lewis, builds his narratives from images; even when the connective tissue doesn't hold up (as it sometimes doesn't in "American Gods" and mostly doesn't in the fairytale-like novel "Stardust"), the individual pictures retain their potency.

In "Coraline," a little girl wanders through a magical door in her family's sitting room to discover a replica of her house on the other side, presided over by her "other mother," a sinister and overly affectionate person with shiny black buttons instead of eyes. The other mother holds her captive, demanding that Coraline acquire her own pair of buttons. It's a very, very creepy book, but also funny and, despite its weirdness, true to life about the way certain adults treat children. A friendly if sarcastic cat explains the other mother's motivations to Coraline: "She wants something to love, I think ... Something that isn't her. She might want something to eat as well. It's hard to tell with things like her."

"American Gods," Gaiman's most recent major novel, shows how this generous and resourceful writer keeps enlarging his scope. The task he sets for himself -- building a fantastic epic on a core of mythic material that feels authentically American -- is a tough one. The revelation in the novel's climax doesn't ring entirely true, but the method Gaiman uses to get there does.

The battered hero of classic hardboiled detective fiction is, in a way, the Hercules of our time. Gaiman sends a man like that, ex-con Shadow Moon, into noir's typically skanky situations, and sets him up for the usual rounds of beatings and betrayals. But Shadow's companions and adversaries in these adventures are a multicultural potluck of defunct gods and demons, withering away due to lack of worshippers, hustling and grifting in order to get by while they plot their big comeback. Not only did Gaiman learn enough about an obscure dualistic Slavic deity to slip him into the novel, he also researched enough about prison life to make Shadow's memories of that seem convincing as well.

There's a story in one of the early Sandman comics in which a writer who has angered Morpheus is cursed by the Dream King with a surplus of ideas. He goes staggering through the streets of London, plagued by scenarios that come so fast he can't set them down. It's a pop-Borges cavalcade: "A city in which the streets are paved with time ... a were-goldfish ... a man who inherits a library card to the Library of Alexandria." You get the impression this guy could be yet another aspect of Gaiman, whose imagination is forever making odd and fruitful leaps to parts previously unknown, leaps that somehow always bring him back home again. In Gaiman's case, though, this onslaught is no curse. For those of us lucky enough to have discovered him, it's a blessing.