Schwarzenegger passes a figurative torch to The Rock, and another majorly mediocre buddy action comedy is born. 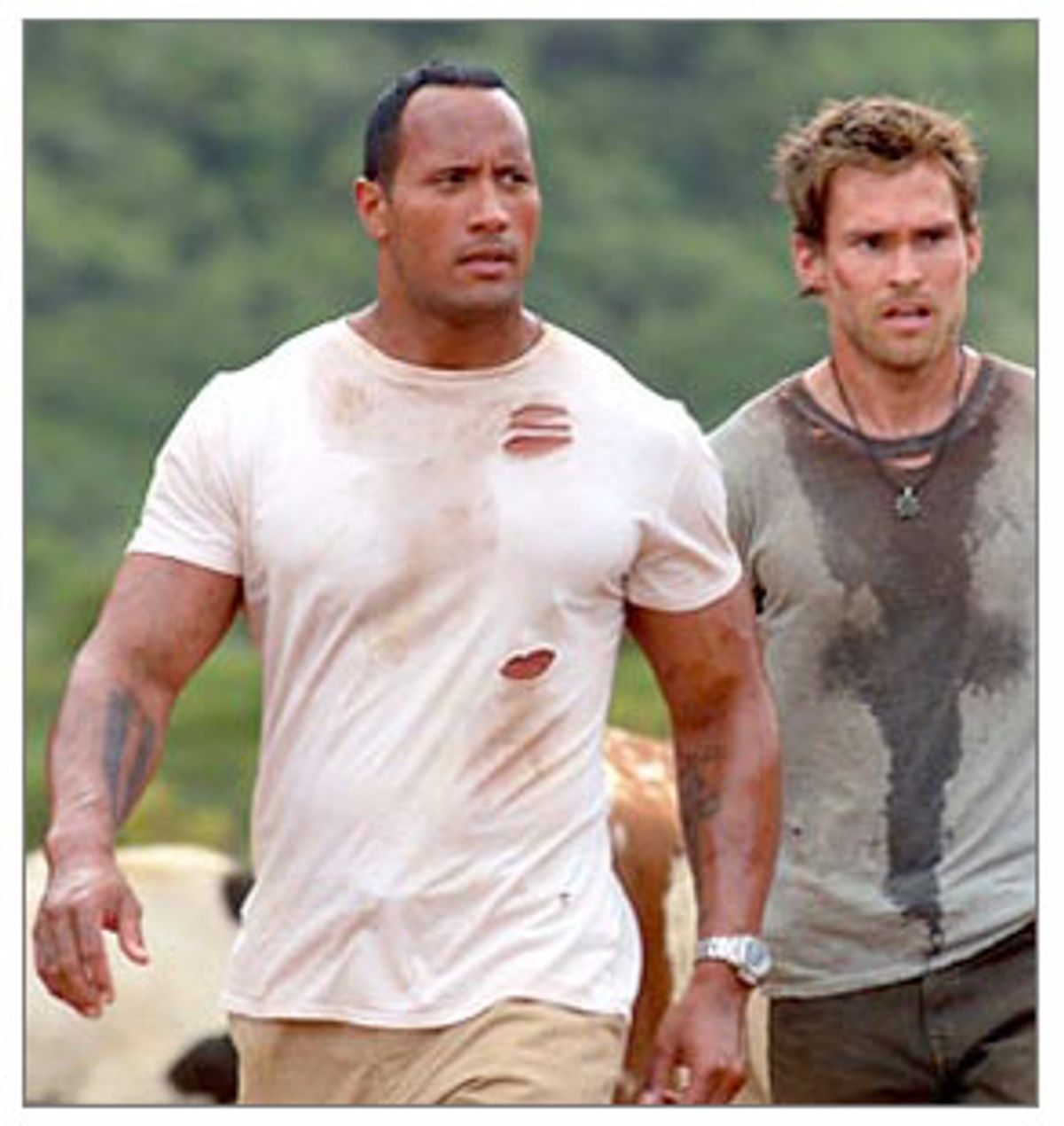 It's too early to say, based on the glitzy, mediocre buddy comedy "The Rundown," whether The Rock is ready to become the next big action hero. But it isn't out of the question. Early in the film, as our ethnically ambiguous protagonist walks into a hip-hop nightclub in pursuit of some high-end college football player who owes some rich white guy "50 large" (you have to use expressions like that in this kind of movie), he passes a certain would-be California governor of Austrian birth. "Haff fun," says the Austrian as he walks out the door, and with that command the action-movie torch is at least theoretically passed.

The Rock does have fun in this movie, playing a bounty-hunting, debt-collecting dude who likes porcini mushrooms and of course turns out to have a heart of gold. He's a handsome guy who cuts a genial figure and plays self-deprecating humor reasonably well. If he isn't exactly Laurence Olivier on the thespian front -- many of his line readings are captured in extreme close-up, which suggests that he's more comfortable playing to the camera than to other human beings -- that's never been a requirement in this genre. He develops an easy chemistry with bratty co-star Seann William Scott (of "Road Trip" and "Bulletproof Monk"), which makes a lot of their dopey mismatched-couple routines funnier than they ought to be.

Add Christopher Walken, giving one of his patented demented performances as a Kurtz-esque mining tycoon deep in the Amazon jungle, along with some vague Hollywood politics about labor exploitation, and "The Rundown" is far too cheerful and good-hearted to be terrible. If you're under 14 years old and already a fan of The Rock (for the uninitiated, he's the biggest star in Vince McMahon's slowly declining World Wrestling Entertainment franchise), it's probably a great film. If you're outside that demographic, it's more like a tolerable alternative when everything else playing at the mall is sold out on Saturday night.

Director Peter Berg (a wannabe Hollywood hotshot whose previous film was "Very Bad Things") does what he can, however, to fill up what would otherwise be a competent if empty-headed formula picture with distractions and irritations. He interrupts the already irrelevant opening scene, in which Beck (The Rock) takes out an entire squad of hard-partyin' football players, with NFL-on-Fox-style computer graphics whereby we see each athlete's vital statistics, glimpse highlights of him in action, see him allegorized to a Mack truck, a piledriver, etc. (All this for characters we will never meet again.)

OK, so that stuff is actually kind of cool, on a purely visual, kinetic level. It energizes the screen, but it's basically pointless -- and Berg is just getting started. Every action scene is edited into incomprehensibility, with 50 or so shots from a dozen or more camera angles, so it's hard to tell if The Rock is an agile stunt performer or a lumbering oaf. (He was a football star at the University of Miami under his birth name of Dwayne Johnson, and he's an athletic performer in the squared circle, but he's no Jet Li.)

When Beck walks into the Brazilian gold-mining town ruled over by the nefarious Hatcher (Walken), Berg and cinematographer Tobias Schliessler succumb to some kind of David Fincher-meets-Sam Peckinpah visual equivalent to Tourette's syndrome: We see the bad guys with their guns! The bullets in the chambers of the guns! The tips of the barrels of the guns! The Rock's right eyeball! Christopher Walken's twitchy smirk! The bald head of a sadistic, bullwhip-bearing foreman! The grainy, flickering TV screens of Christopher Walken's surveillance center! All for one-eighth of a second apiece! You get the feeling that this guy went to film school and he's going to prove it, damn it all, even to an audience that's getting tired of this piss-art and sitting there waiting for him to get back to the yucks and the ass-kicking.

Beck has been sent to the Amazon by the aforementioned rich white guy to track down his renegade son Travis (Scott), who is trying to romance a foxy Brazilian barkeep (Rosario Dawson) and also to discover one of those ancient and mysterious solid-gold idols that movieland archaeologists are always stumbling over in the jungle. When Beck tells Hatcher that he has "business" with the missing Travis, we get one of Walken's finer moments: He flares his nostrils, like a starving man smelling a perfectly grilled steak, and says, "I love business."

There's a band of rebels who do high-flying capoeira stunts. There's an eccentric bush pilot (Ewen Bremner) with dorky gym shorts and an almost incomprehensible Ulster accent, for no reason at all. Berg and screenwriters R.J. Stewart and James Vanderbilt are shooting for semi-classic '80s goofballing on the level of Walter Hill's "48 HRS." and Martin Brest's "Midnight Run." They don't get there -- they don't even get close -- but there's nothing disgraceful in the attempt.

Dawson is a lovely and appealing screen presence, but her role amounts to nothing, and neither does the romance (for either Beck or Travis); this is an adventure movie for boys who haven't yet decided whether girls are icky or not. The one really impressive visual accomplishment in "The Rundown" is the massive, nightmarish open-pit mine where thousands of Hatcher's serfs scrabble for gold nuggets in the dirt. When Beck and Travis decide to put aside their squabbling and help the foxy bartender and her rebel allies take on Hatcher and his thugs, it gives "The Rundown" a few minutes of satisfying moral heft it hasn't actually earned.