"Under the Tuscan Sun"

For a movie about moving to Italy and bedding a hot Italian stallion, this sterile fantasy is about as sexy as a rusty olive oil can. 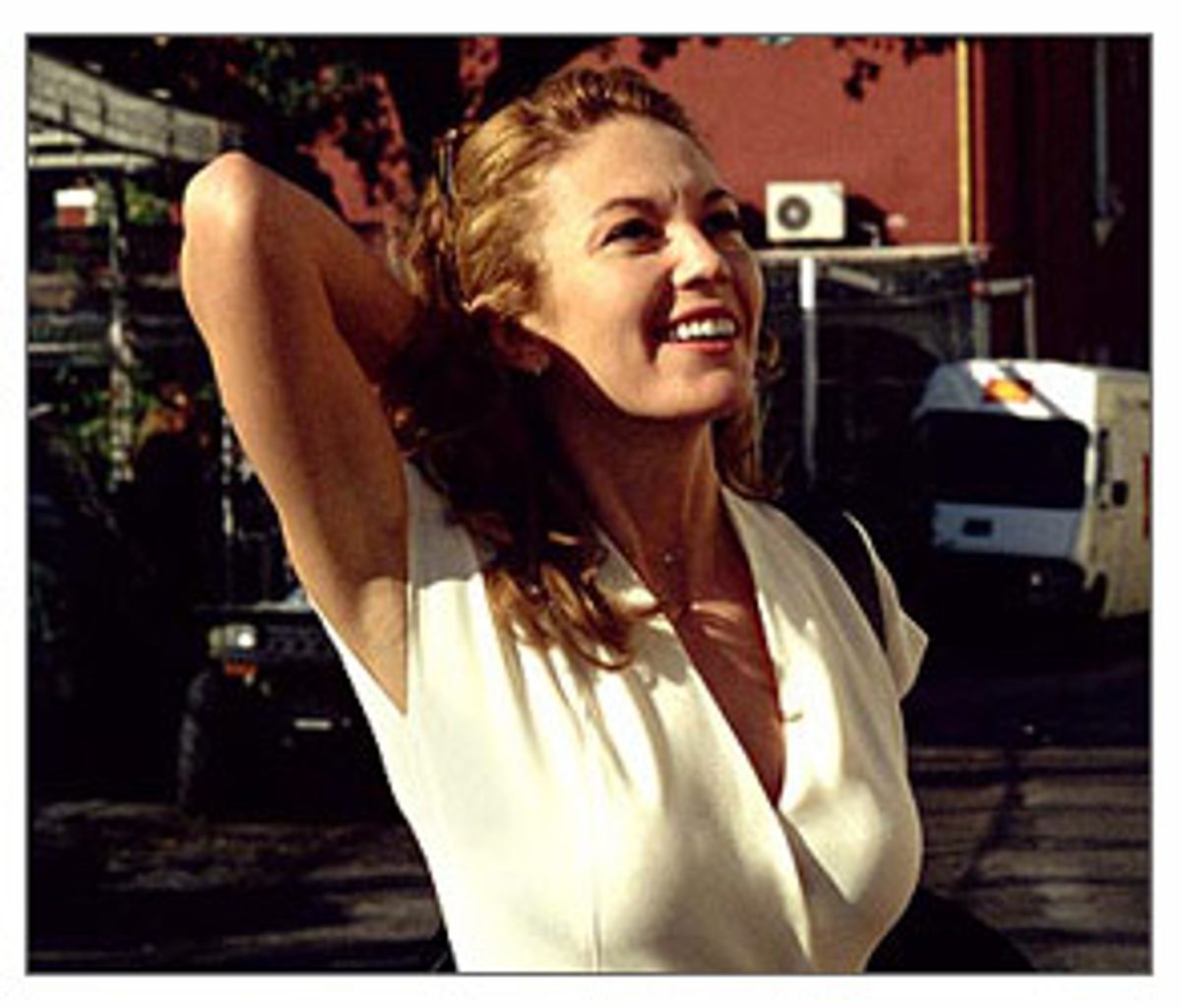 In "Under the Tuscan Sun," a recently divorced writing professor and book reviewer -- played by Diane Lane -- escapes from her painful past in San Francisco to Tuscany, where she impulsively buys a ramshackle house that needs more work than she ever bargained for. She hires a troupe of Polish workers who don't even speak Italian, let alone English, puts them to work and then trots off to the city to pick up a spare chandelier part (like you do), where she meets Marcello (Raoul Bova), an olive-skinned, doe-lashed honey of a man who sweeps her into his bedroom, murmuring, "I want to make love all over you."

OK, that's not all that happens in "Under the Tuscan Sun," but you get the gist: Lane's character, Frances, learns to live again, freed not just from the shackles of a cheating husband but from the persistent and distracting whirring of American life. In Tuscany, there's nothing to do but harvest your own plump, meaty olives (they just happen to thrive on trees right outside your door), nourish your own sun-caressed tomatoes, and lavish care and attention on your very own grapes, which hang heavy with promise until the sundial says it's time to pluck them. Then you spend afternoons in your charmingly primitive kitchen transforming this miraculous produce into feats of culinary fabulousness.

It helps if you don't have to have an actual job, and Frances doesn't seem to. ("Book reviewing" doesn't count, not even by Hollywood standards of what constitutes a job. Forget buying villas in sun-baked Tuscany -- most people who manage to make a living off book reviewing are lucky if they can afford to heat their doll-house-size apartments.) But then "Under the Tuscan Sun" -- which is based very loosely on Frances Mayes' autobiographical bestseller -- is pure fantasy, which is what makes it enjoyable, at least at the beginning. What if you could run away from your life, as Frances does? Start all over again in a place that affords plenty of simple joys and only the occasional manageable dollop of pain and heartache? And if you were going to start all over again anywhere in the world, you'd certainly want to do it in Tuscany as it's shot here by Geoffrey Simpson: This is a landscape of plush-velvet hills dotted with those slender trees, pointed at the top and bottom but gently belled out in between, that some of us know only from Chuck Jones cartoons.

The pure fantasy element of "Under the Tuscan Sun" should be enough to sustain us through the whole movie. But director and screenwriter Audrey Wells (her previous feature was the 1999 "Guinevere") manages to make even the fantasy wearying. When we first see that Tuscan house, a darkly gorgeous shambles with tons of potential, the do-it-yourselfer's heart in all of us skips a beat. This tumbledown beauty is wonderful as it is, but with just a little imagination, it could be spectacular.

But Wells never shows us the transformation. In an early scene, part of the ceiling caves in on the workers; later we see them bustling and hammering about, and carrying a few big stones hither and yon. Once in a while, something weird happens: Steam hisses from a toilet bowl, or a curious snake sneaks in for a visit. And then suddenly, one day -- after months of Frances' attempting to have a love interest, dealing with friends' problems, and, we assume, book reviewing, although we never see her actually doing it -- the house is finished. We get "before" and "after" but only a very blurred "during," and it makes the whole enterprise feel rushed and false instead of primally satisfying.

Frances makes new friends in Tuscany, and not just the kind you sleep with: There's her real-estate agent, Signor Martini (played with sultry yet bearlike charm by Vincent Riotta), who's always around to lend a hand, not least because he has something of a crush on Frances (though he remains dutifully faithful to his wife). And there's Frances' pregnant friend Patti (Sandra Oh, who has some fine, craftily deadpan moments), who happens to be a lesbian (although, in one of the movie's more refreshing touches, her orientation is neither treated as a novelty nor raised for hipness' sake and then ignored -- it simply is).

But there's also Lindsay Duncan as Katherine, an eccentric 50-ish Englishwoman who has, unluckily for the locals, transplanted herself to Italy, where she swans about in apish imitation of Anita Ekberg in "La Dolce Vita." She met Fellini once, she tells Frances dreamily. He told her, "Always keep your childish innocence," and she's done so with a vengeance -- when we first spot her, at an outdoor market, she's clutching a downy duckling to her heavily powdered cheek (apparently the market is fresh out of white kittens that day) with such ferocity that you fear she's going to bite its head off. Duncan proceeds to eat her way through the rest of the movie like a platinum termite, but you can't believe the performance is wholly her fault: The role itself is rigid and thankless, as if Wells felt the movie needed a few spots of color and proceeded to rub them in like rouge.

Diane Lane survives "Under the Tuscan Sun," but barely. Lane is a fearless actress, and not just because she played a philandering wife in last year's "Unfaithful." There's something both tender and tenacious about her. Without resorting to the dreaded "life force" style of acting, she always makes you believe there's a fire burning somewhere in whatever character she plays -- but she shows us only the embers, not the flame.

Lane has some fun in "Under the Tuscan Sun": After she meets Marcello, she does a victory go-go dance in the privacy of her sun-dappled Tuscan bedroom -- it's like a free-form tribal ritual of thanks to the Gods of Great Sex, and Lane brings that exhilaration home to us.

But not even she can break through the sterile, prepackaged fantasy bubble that "Under the Tuscan Sun" ultimately becomes. The movie has some sex in it, and yet it's as unsexy as a rusty old olive oil can (minus the olive oil). Every element in "Under the Tuscan Sun" is nice with a capital "N"; this is catalog moviemaking, where old houses, romances and even landscapes are spread before us as if they were little square pictures representing things that could actually belong to us, tomorrow, if we just whip out our credit cards. It's a Tuscan dream escape for the Eileen Fisher crowd, a movie done up in tasteful shapes and comfy fabrics that cost a lot but are essentially asexual. "Under the Tuscan Sun" pretends to be juicy, but it doesn't allow any dribbles. It purports to make love all over us, but not without laying down lots of paper towels first.