The online enemy of the Clinton White House has found a new target: The bumbling Bush administration. 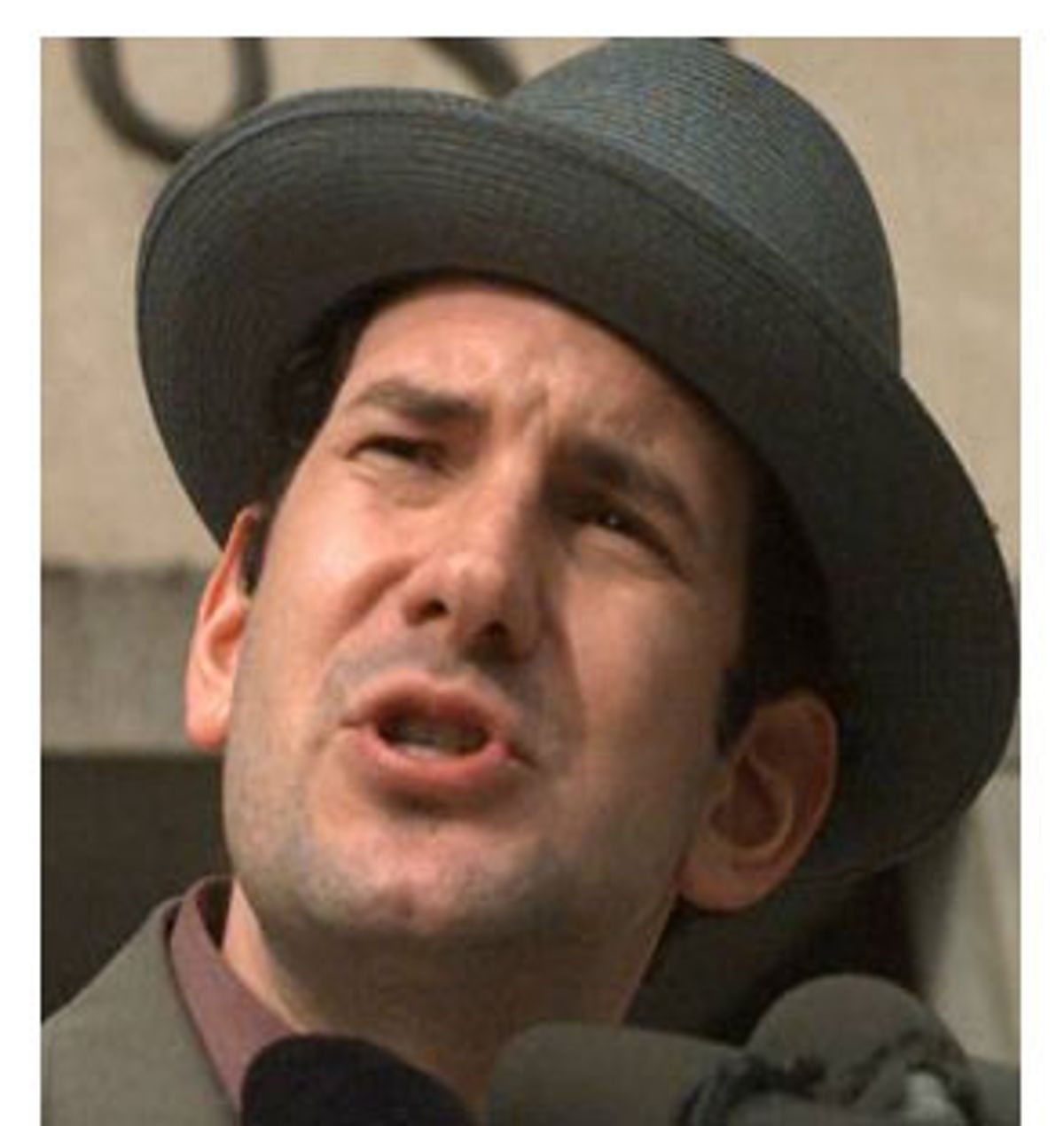 Liberals, Bush-haters, disillusioned right wingers: Meet your new journalistic hero, your muckraking defender of the everyman, your razor-sharp slasher of the Bush White House and Arnold Schwarzenegger's drive to take over California for the GOP.

OK, don't sign him up for a Salon Premium subscription just yet. But as unlikely as it seems, the online bottom feeder, who made his mark in the '90s spreading allegations that Bill Clinton got Oval Office nookie (true) and his aide Sidney Blumenthal beat his wife (false), is now going after the Bush White House with similar gusto.

This time, however, Drudge isn't trolling for tidbits about the administration's private lives. Instead, he's zeroing in on policy and the political messes the Bushies are making -- of the budget, of civil liberties, and of Iraq.

Just look at a sample of Drudge's headlines, from one week early in September:

"COUNTRIES WARY IN REACTING TO BUSH'S SPEECH ON IRAQ ..."

"Report Finds Size of Government Up Sharply Under Bush ..."

But if these 72-point screamers aren't exactly what you'd expect from a former Fox News Channel talk show host, neither is Drudge's relentless focus on government plans to snoop on average citizens. In recent months, Drudge has given attention to creepy surveillance programs like the CAPPS II airline passenger screening system and "Combat Zones That See," the Pentagon's plan to keep an entire city under watch.

"[Attorney General] Ashcroft argued as a senator that there should be no Big Brother police state on e-mails, even with the most heinous crimes," Drudge recently told Radar magazine (he wouldn't respond to interview requests from Salon). "So to hide behind the World Trade Center to start going into our hard drives is a complete folly, and the Bush administration will pay the price with votes."

It's not that Drudge has had a political conversion, allies and observers say. A registered Republican, he gave nearly $2,500 to the GOP in 2001. (After this story was published, Drudge emailed Salon to say he nas "never" given money "to anyone in politics," and that the GOP donation was "a fraud. Someone did it in my name." In an MSNBC appearance, Drudge admitted that "White House staffers of all ranks help me in research and tipping off stories."

But Bush's 10-thumb approach to handling a number of key areas, from the budget to the war on terror, has Drudge and many other conservatives growling.

"The concern Drudge is expressing is part of a wider sense of angst among the right wing," notes Michael Franc, with the Heritage Foundation, the conservative think tank.

"We've had enough distance from 9/11 that there's a new willingness to raise questions," says GOP power broker Grover Norquist, who counts himself as a "daily" Drudge reader. "And you pick it up with Drudge."

"Oh, how we wish he [Reagan] would descend from St. Cloud Street and save us from this monster government that's being created -- under Republicans!" Drudge told his radio audience on Sept. 20. "The consolidation of this government and the expansion of this government, the databasing of our lives, the cameras being put all over -- is, is creeping me out."

But beyond the Orwellian itchiness, there's a more basic reason for Drudge's targeting of the Bush camp, site watchers say. Step into the limelight, and you'll feel the sting of Drudge's darts -- no matter what your politics are.

"He's taking on the high school administration," says one Drudge ally. "All authority figures are enjoyable targets. And it's the mischievousness of it all that gets under the skin of the establishment, à la Ferris Bueller."

"I didn't think of him so much as a conservative as an outsider," adds Susan Estrich, the former Dukakis campaign manager, who publicly defended Drudge during his legal tangle with Sidney Blumenthal.

Camille Paglia, a longtime Drudge pal, phones in, "He has an independent voice and an independent imagination. He doesn't carry water for the Republicans or any organization, although it might seem that way sometimes."

"Drudge has been flashing the sirens for a photo of Clark and a Serbian commander wearing each other's hats in 1994, but he has never run the photo of Donald Rumsfeld warmly shaking Saddam Hussein's hand in 1983," e-mails Rogers Cadenhead, who runs the Drudge Retort," a parody site.

To Cadenhead, the fact that White House officials revealed the name of a CIA operative married to a political opponent is one of the biggest political scandals in recent memory. But for days Drudge didn't even have the tiniest of links about the imbroglio, despite the fact that Bush staffers may have committed a crime under the Intelligence Identities Protection Act of 1982, punishable by up to 10 years in the can.

"If Drudge had that kind of allegation to sling at the Clintons, he would've put it on the Drudge Report with a link bigger than his head. Walter Lippman he ain't," Cadenhead concludes.

Don't hand over the New Republic editorial reins yet. But give Drudge some credit: Over the weekend, he featured the Plame affair in a font that may have been slightly smaller than his fedora-topped skull -- but not by much. On Monday, he gave the story similar play.

Bush White House aides aren't the only Republicans getting the scandal treatment. Just ask Arnold Schwarzenegger. Since he got into the California recall race, the "Kindergarten Cop" has been the subject of a seemingly endless series of saucy Drudge links:

And, of course, the now-legendary:

Headlines like these should be expected, notes online publishing consultant Vin Crosbie. Drudge is more of an entertainer than he is an ideologue. "This isn't a political matter at all -- it's part of his business plan."

During that time, Drudge was also at the forefront of a sharply ideological movement to skewer the Clinton administration on moral issues. Will he be as influential in the effort to impale the Bush administration on its policy gaffes? Probably not. But for Republicans, long used to a reliable, 7 million-visit-per-day ally, having Drudge as a critic -- even an occasional one -- cannot be good news.