The blowhard is gone, but sports fans shouldn't forget how ESPN cynically sold them out for a few bucks. 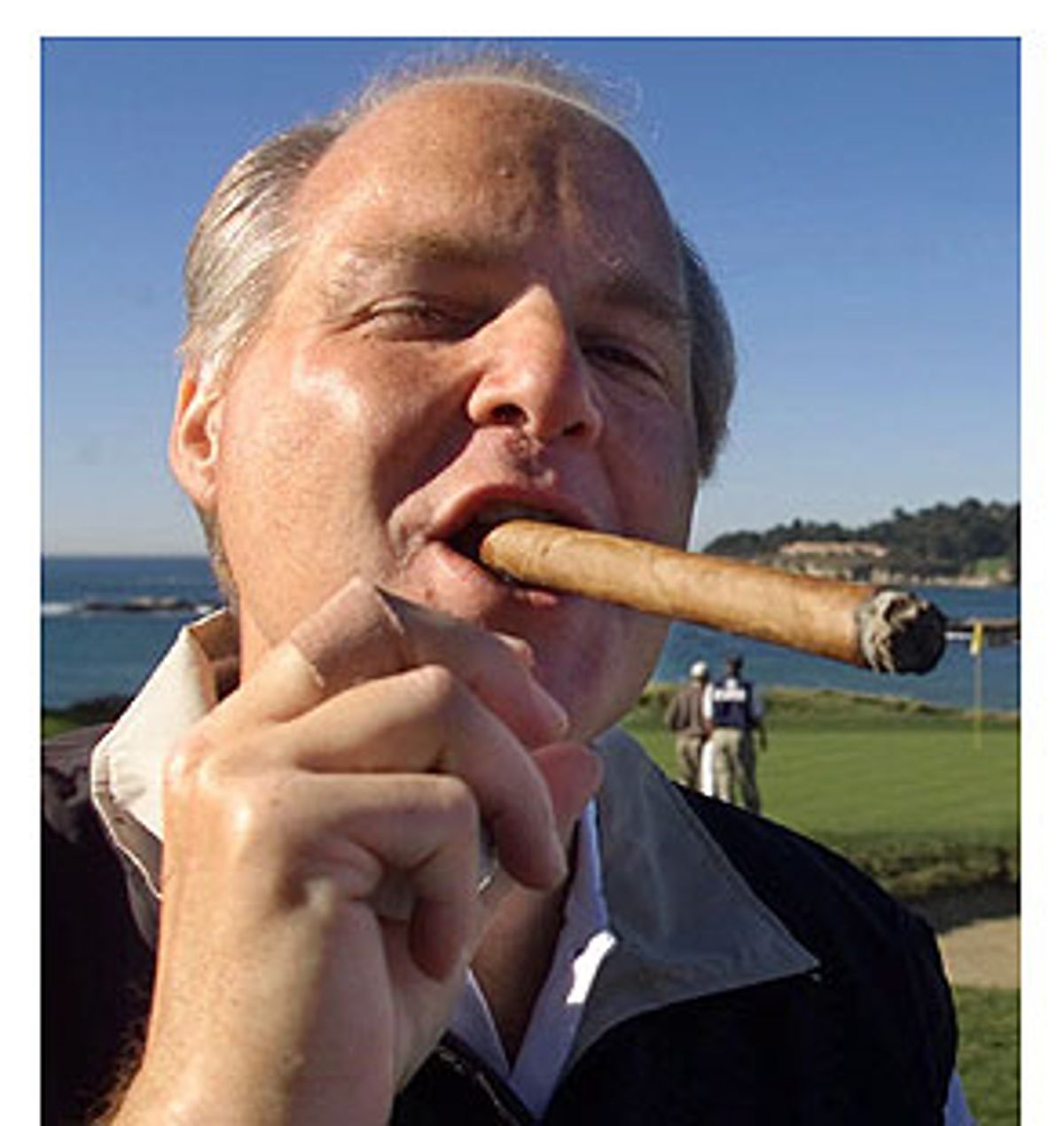 The Rush Limbaugh era is over at ESPN. It was exactly what any thinking person knew it would be: nasty, brutish and short. It goosed ratings for "Sunday NFL Countdown" by 10 percent while offending legions of viewers, not just with Limbaugh's right-wing politics but with his ignorance about the game and its players.

The creation of the Rush Limbaugh era was a move of astonishing cynicism by ESPN, a race down the low road in search of a buck or two, middle finger extended out the driver's side window at its best customers, hardcore sports fans. Knowing that any publicity is good publicity and that hiring Limbaugh would have tongues wagging, the network hired him knowing he'd add nothing to viewers' enjoyment of the games but plenty to the bottom line as the curious tuned in to see how Rush would try to shape the events on the field to fit his know-nothing political agenda.

Time and again in his brief, idiotic tenure Limbaugh returned to one of his favorite themes, the liberal media, sometimes imagined as an unthinking horde marching in lockstep, sometimes as individual reporters, legions of them, all acting in exactly the same way for some reason that's obvious to Rush if not to the rest of us.

Bill Parcells' reputation as a great coach won't suffer even if he fails in Dallas, Limbaugh said, because reporters idolize him and love that he returns their calls. Jeremy Shockey has gotten so much attention, he said, because New York sportswriters have had no great football players to write about for decades, so they've gone gaga for him. And so on.

Limbaugh was working this angle Sunday when he made the comments that cut his football career short. He said that Eagles quarterback Donovan McNabb, off to a rough start this year, had actually never been that good in the first place. The three-time Pro Bowler who was having an MVP-type season last year before he got hurt had been overrated by the media in a sort of affirmative action move: "I think what we've had here is a little social concern in the NFL," Limbaugh said. "The media has been very desirous that a black quarterback do well. There is a little hope invested in McNabb, and he got a lot of credit for the performance of this team that he didn't deserve."

It took a few days, but by Wednesday there was a wave of outrage at Limbaugh's race-baiting. Democratic presidential candidates faxed out their tsk-tsks and demands for Limbaugh's head, including Howard Dean, who hilariously proclaimed, "Rush Limbaugh's comment this week about Philadelphia Jets quarterback Donovan McNabb is unacceptable." The governor really kicked a touchdown with that one.

Late Wednesday night, Limbaugh announced that he was resigning from the show, saying in a statement that while his comments were not racially motivated, they had "caused discomfort to the crew, which I regret."

As dumb and offensive as Limbaugh's comments were, suggesting that a successful quarterback has seemed successful only because of racially motivated special media treatment, they didn't seem outrageous enough to get Limbaugh fired. They were pretty much run-of-the-mill Rush, exactly the kind of thing ESPN knew it was getting when it signed him up. ESPN wasn't after cogent analysis of the Xs and Os when it brought Limbaugh aboard. It was hoping he'd generate controversy, publicity and ratings. ESPN wanted people with no interest in football to tune in to its Sunday show. Screw the core audience, the football fans. They'll tune in anyway.

Considering those robust numbers, it's hard to picture the fairly mild media pressure that's been applied to ESPN this week being sufficient to oust Limbaugh. I'm guessing there was significant rank-and-file anger in Bristol, Conn., the network's home, that made his position untenable. He hinted at that in his resignation statement by referring to causing "discomfort to the crew." (Or perhaps the quick surrender had something to do with the investigation into illegal drug use by Limbaugh that was reported in Thursday's New York Daily News.)

Perhaps all or some of his fellow "Countdown" panelists, Michael Irvin, Tom Jackson and Steve Young, all former players, the first two African-American, refused to work with him anymore. Jackson looked stunned as Limbaugh was saying his piece about McNabb Sunday, though he and Young both argued only with Limbaugh's assessment of McNabb as a player, not with the racial element of his comments.

ESPN devoted the first several minutes of its post-baseball "SportsCenter" early Thursday morning to pretending to cover the Limbaugh resignation story, anchors Steve Levy and Linda Cohn affecting their best serious newsperson voices. But they neglected to mention anything about the situation in their own building, where the story was. There were no interviews with Jackson, Irvin or Young, though presumably ESPN shouldn't have had trouble gaining access to those fellows.

Instead, the report showed a long, long series of clips from McNabb's news conference, at which he basically said that Limbaugh's comments were sad and disappointing, they bothered him, and he wouldn't have much use for an apology. It also quoted, without naming him, a self-serving statement from George Bodenheimer, president of ESPN and ABC Sports. "We accept his resignation and regret the circumstances surrounding this," the statement said. "We believe that he took the appropriate action to resolve this matter expeditiously."

ESPN regrets the circumstances? The network created the circumstances. Bodenheimer sounded as stupid and disingenuous as MSNBC executives did in July when they declared themselves shocked and disappointed that homophobic hate-monger Michael Savage, whom they'd hired to do that thing he does, had made homophobic, hateful comments on the air.

ESPN wants to look like it's taking the high road here, but it couldn't see the high road with the Hubble telescope. The network benefitted from the ratings boost Limbaugh's mud-slinging brought and wants to separate itself from him now that things have gotten a little too muddy. That detached sniffle about regretting the circumstances and being glad that Limbaugh "took appropriate action" almost makes it sound as though the whole thing had happened to someone else. It's like Limbaugh had somehow started showing up on "Sunday NFL Countdown" without ESPN quite being aware of what was going on.

Grambling coach Doug Williams, a pioneering black quarterback in his playing days, put it best. "They knew what they were hiring," he said. "You can paint a zebra, but it's still a zebra."

Limbaugh is a clown, a dog-and-pony show with no more insight into football than he has into politics, though he proved far less entertaining in his new field than he is in his regular gig. You can blame him for his dim-witted comments and lame attempts to shoehorn his political views into football analysis, but that seems like a waste of time. Do you blame a dog for sniffing butts? Limbaugh is what he is.

Blame ESPN for selling out the interests of its constituency for two-tenths of a ratings point and then pretending that it never happened. Sports fans deserve better.