Sinners in the hands of an angry dad

The latest product from O'Reilly's factory is, God help us, a self-help book. 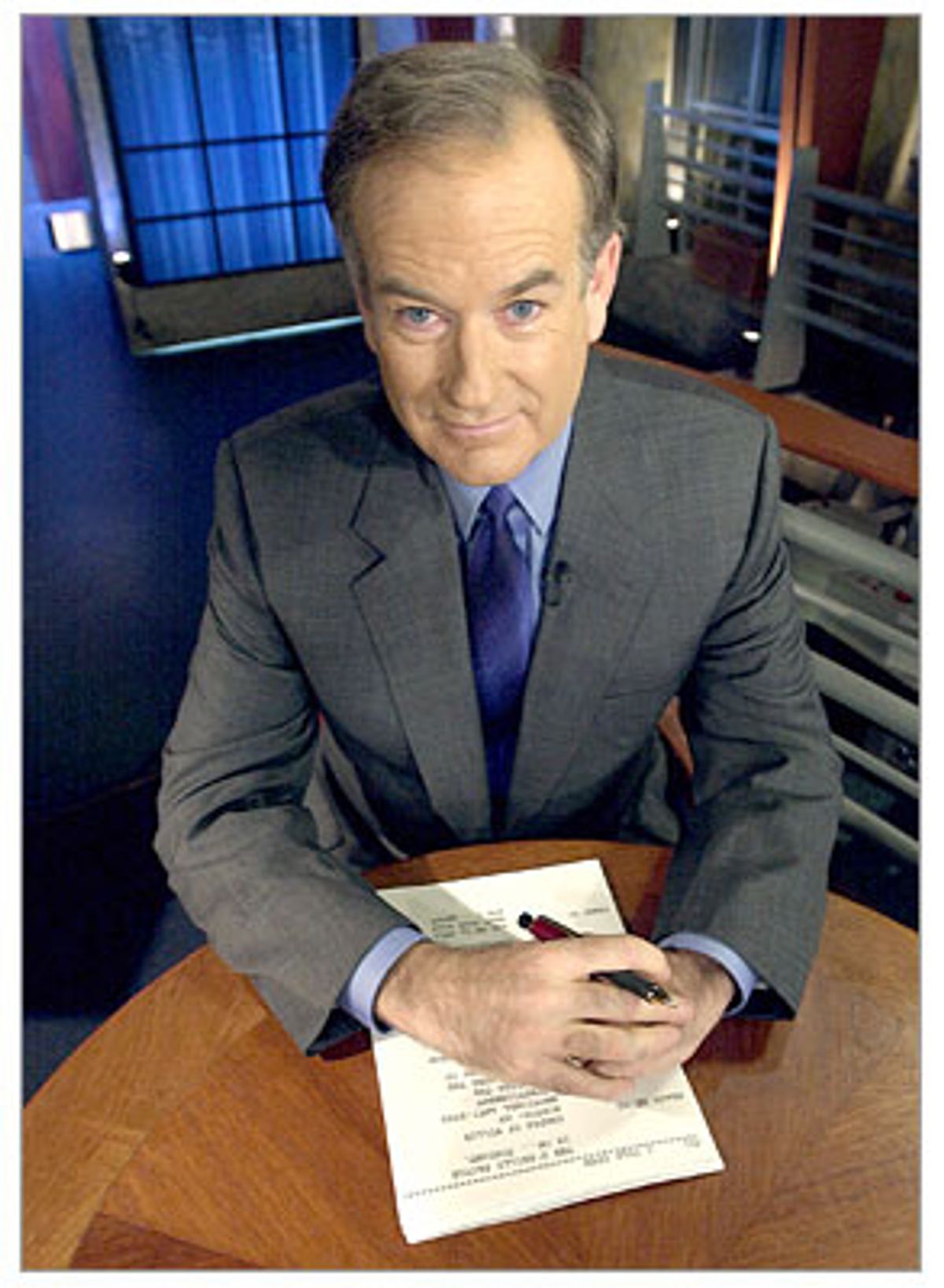 At first glimpse, Bill O'Reilly's new book, "Who's Looking Out for You?" seems like another cynical attempt sell a few million copies of an overstuffed pamphlet. But there's something different about the latest volume from the unofficial Fox News mascot: It's his first foray into the world of self-help publishing.

It may sound odd to be getting advice from the bombastic talk-show host best known for shouting down his guests, calling them "pinheads" and, when civility fails, telling them to shut up. In fact, O'Reilly's fairly unbalanced behavior often suggests that he should be on the receiving end of some professional advice. Perhaps O'Reilly -- or at least his publishers -- sense this. Witness the front cover of "Who's Looking Out for You?": O'Reilly sits by a computer monitor, wearing a casual button-down and an uncharacteristically avuncular expression. He looks relaxed, even approachable, as if you had just brought him a mug of tea while he was helping you out with your taxes. "Come closer," he seems to be saying. "I won't bite."

Is it possible that we're seeing the softer side of the "no-spin zone"? O'Reilly 's image certainly could use a good airbrushing. And now that Bush's numbers are sinking and Rush is an admitted doper, conservatives could use a P.R. boost. Could a kindler, gentler Bill O'Reilly be the ticket? With "Who's Looking Out for You?" O'Reilly has ventured out of the echo chamber that is "The O'Reilly Factor" to try out a new role. He wants to be your father figure. Though he already has his hands full with his own pair of rarely mentioned offspring, he apparently has plenty of parental attention to go around. He's even engraved his own "Ten Commandments of Effective Parenting," condensed thusly: "The primary duty of a parent is to give his or her children the tools to build a happy and successful life." If your folks didn't do the job right, he's happy to give it a try.

In his introduction, O'Reilly explains that he is so grateful to his millions of loyal fans that he wants to give them a "big thank-you" by sharing his secrets for how to make their lives "much happier and probably much longer." "Your humble correspondent," as he likes to call himself, wants to help you become a better person: an honest and caring individual who respectfully listens to others' opinions and doesn't go around filing frivolous lawsuits. By the time you're done reading his book, you'll be a "kick-butt problem solver" who can face your problems and "knee them in the groin." Don't let the $25 price tag fool you -- this book is a gift to you, the reader.

But don't cozy up with Papa Bill quite so quickly. His father fixation explains a lot of his overbearing, melodramatic behavior of late. It also makes his attempt to portray himself as a purveyor of homey advice all the more creepy. With its vaguely Ashcroftian title, "Who's Looking Out for You?" conjures the image of O'Reilly as a paternalistic panopticon keeper, monitoring Americans' political beliefs and personal lives whether we like it or not. Maybe he should have called it "Who's Your Daddy?"

As the wannabe father of us all, he's a scowling, scolding presence, dishing out tough love and poking his nose into our affairs. This is the O'Reilly who, as proudly recounted in his book, filed a complaint with child-protection officials on behalf of the 9-year-old daughter of Whitney Houston and Bobby Brown. It's the same O'Reilly who famously went ballistic on "Factor" guest Jeremy Glick, whose father was killed in the World Trade Center on Sept. 11. After Glick criticized Bush and the war on terrorism, O'Reilly lectured, "I don't think your father would be approving of this." Displeased with Glick's perceived lack of filial piety, O'Reilly ordered him to shut up and then demanded that his microphone be cut.

O'Reilly recites the well-worn tale of his "rough-hewn" upbringing in an Irish Catholic family in blue-collar Levittown, Long Island (actually, he grew up in its tonier neighbor, Westbury, according to his mother). O'Reilly again tries to spin his middle-class childhood as a suburban version of "Angela's Ashes." This romanticizing might be excused if he weren't so quick to slap down anyone he perceives as a class traitor. Jennifer Lopez is slammed for trying to keep her street cred as "Jenny from the block." Meanwhile, Billy from Levittown, who reportedly hauls in $4.5 million a year, self-consciously insists that he'd rather be eating Whoppers than hanging out at swanky Manhattan parties. Later, he gripes how, when he was host of "Inside Edition" ("one of those tabloid infotainment shows, but a good one") he was denied "perks" such as first-class air travel. You would think he wouldn't mind sitting with the salt of the earth back in coach, munching on peanuts.

O'Reilly's ingrained sense that he's come a long way has less to do with overcoming financial hardship than familial hardship. Even though he calls the concept a "cliché," he clearly lugs around some pretty heavy emotional baggage. "There was plenty of tension in my house," he recalls. "Along with a lot of yelling and martial arts." At the center of the maelstrom was O'Reilly's dad, an ornery and occasionally abusive figure. "There were times when I hated my father. I admit it. He knew it. The punishment that descended upon me was mostly uncalled-for and born of the frustration of his life." And his paternal grandfather wasn't exactly a role model, either. O'Reilly describes him as a crusty Brooklyn beat cop who practiced "a kind of low-grade vigilantism."

For armchair psychologists, this is pure gold. It's not too tough to imagine how a kid who grew up with an unsupportive father and a thuggish grandfather went on to host a show like the "Factor." The apple didn't fall too far from the tree. However, O'Reilly clearly wants to be a better man than his forebears. Hence his desire to be a crusader, albeit a pretty thin-skinned one. Just last week, he stormed off National Public Radio's "Fresh Air," accusing host Terry Gross of doing "a hatchet job on me." What triggered the congenital O'Reilly temper to flare? Gross had started to read an unflattering People magazine review of "Who's Looking Out for You?"

Despite his conflicted feelings about his father and grandfather, O'Reilly is loath to condemn them. His dad wasn't a great parent, but O'Reilly insists that didn't make him a bad person. Sure, he was a "suspicious guy" who "trusted almost no one" and "set a terrible example by inflicting unnecessary pain on his children." But, O'Reilly explains: "He did not do this on purpose. He simply could not control himself." Likewise, Grandpa O'Reilly's strong-arm approach to law enforcement didn't make him a criminal. "He was a good man, but some of his cohorts were not," says O'Reilly. Like his son, his downfall was that he didn't have a "support system," a phrase that sounds alarmingly touchy-feely for a guy who cringes at the idea of emotional baggage.

That O'Reilly gives his father and grandfather a moral pass is ironic, considering how quick he is to hold people accountable for their actions, even when those actions might partly be the product of economics, culture or circumstance. It's even more ironic, considering that O'Reilly spends the better part of two chapters instructing poor people and minorities how to be more responsible. He laments the disintegration of moral values in the inner city and the decline of the African-American family. During these harangues, his message is one of personal responsibility: Get married, get a job, and stop making excuses or blaming others for your lot in life.

Just as he laid down commandments for parenting, so he lays down a list of commandments for poor folks. "[F]or real change to happen in chaotic neighborhoods, there must be rules, strict rules," he asserts. Rules like "zero tolerance for adults who hurt or endanger kids." Never mind that his 10 commandments for suburban Fox-watchers condones "corporal punishment as a last resort." Now suppose that Bill O'Reilly Sr. had lived in the ghetto, hating his life, neglecting his kids, and taking the occasional swipe at them. Think he'd be excused as someone "who simply could not control himself" and who could have been happy if only somebody "gave him direction"? Fat chance. O'Reilly's got no problem giving white middle-class guys like himself a free ride while people with different-colored skin and skimpier wallets are taken to task.

But, as O'Reilly reminds us, "self-delusions can negate even the best advice."

In his unconvincing attempt to come off as self-help guru and nice guy, O'Reilly has inadvertently provided a pretty good idea of what makes him tick. As the son and grandson of two failed fathers, it's no wonder he's obsessed with dominating male figures. O'Reilly thinks what this country needs is a stern father figure, and he's more than happy to play the part, whether he's acting as a surrogate husband for single mothers and their children or making pronouncements about what music you should listen to or whom you should trust.

So who, according to O'Reilly, is looking out for you? George W. Bush gets a lukewarm nod, Fox News gets a thumbs-up, but otherwise it's a pretty short list. O'Reilly manages to hold back his ultimate answer for 212 pages, until the very last paragraph, when he goes for broke: "I hope I have looked out for you by writing this book. Thanks for reading it." Betcha didn't see that one coming.

Dave Gilson is a journalist who lives in the San Francisco Bay Area.