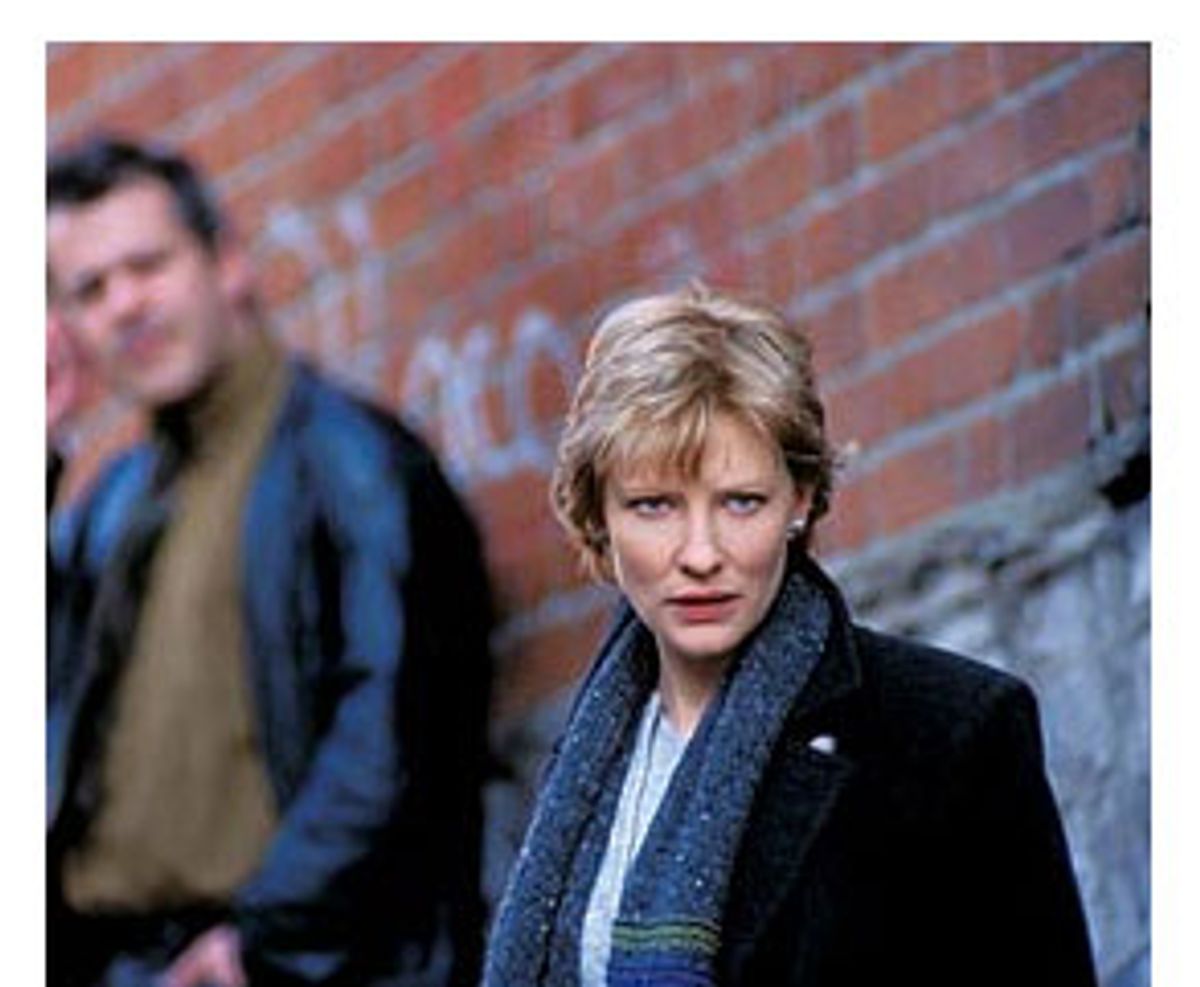 As depicted in the new movie bearing her name, the Irish reporter Veronica Guerin fits the template of feisty movie heroine, but she isn't much of a journalist. That assessment may be unfair to the real Guerin, who was murdered in 1996 by the thugs whose drug dealing she was exposing in a series of articles for the Irish Sunday Independent. The movie tells us that Guerin's death prompted an immediate amendment of the Irish constitution, allowing the government to seize the assets of drug dealers. Before she was murdered, Guerin had been beaten, threatened and shot in the leg by a gunman who invaded her home on Christmas Eve. But can she really have been as foolhardy as this movie makes her out to be?

The drug kingpin that the real Guerin was going after dealt in marijuana and not, as the movie has it, heroin. That doesn't lessen the brutality of the people she went up against, but it does considerable damage to the movie's claim that Guerin was motivated by the young people being killed by drugs. Even if you don't know about that change, the woman we see in the movie seems much more interested in making her name than in breaking an important story. As presented here, Guerin (Cate Blanchett) -- before she begins to report on Dublin's drug trade -- feels that the stories she's working on are unimportant, and it's understandable that a writer would get fed up doing puff pieces. But she's so eager to make a splash that her reporting methods are, at best, slipshod.

Guerin gets a tip from a longtime source, a criminal named John Traynor (Ciarán Hinds), identifying the perpetrator of a recent murder (in fact, it's the killing of Martin Cahill, the subject of John Boorman's movie "The General"). She rushes the story into print, but it turns out Traynor is using her to foment a war between rival crime gangs. When she uses her police contacts to get information that will further her investigation and tells a cop she's friendly with that she can help him get the drug lords, she's not just a journalist schmoozing a valuable source -- Guerin entertains visions of the glory that will be heaped on her for eradicating this problem. The movie makes sure we see how much Dublin journalists derided Guerin as a careerist instead of a real reporter. But the scene where journalists in a bar jeer a television interview with Guerin backfires.

We're meant to see them as cynical, but from what we see of her methods, their derision is absolutely right. You can't imagine any seasoned journalist, no matter how much he or she trusts a source, taking the word of a criminal without verification. And though the movie doesn't buy into the canard of "objective" journalism, it's hard not to feel some misgivings when Guerin joins the chanting crowd at a rally to get drug dealers out of a neighborhood, even as she's covering the event. Or when she sells herself to the police as a potential arm of their investigation. Pretty soon, even though the drug in question has been changed to heroin for the movie, there's no talk at all of the victims of the drug trade. Just Guerin's stubborn determination not to be frightened off her story, and the movie's total lack of awareness of her self-aggrandizement -- or her carelessness.

What we see of Veronica Guerin is very different from the way the movie wants us to regard her. Guerin was famous for visiting her quarry at their homes and in one scene, when she confronts the drug kingpin John Gilligan (Gerard McSorley) at his home, he beats her viciously. Watching the scene you can't help but feel that Guerin was thinking only of the drama, of how her brave confrontation with a gangster would play in print, and not of the danger, which seems both foreseeable and avoidable.

Movies have long taught us to worship the lone male hero who ignores danger to stand up for what he knows is right. "Veronica Guerin" suggests that the filmmakers are banking on contemporary audiences accepting the same thing in a woman. In the production notes, the director Joel Schumacher says, "I think we live out our fantasies by going to see movies where the heroes and heroines do extraordinary things that we would like to do -- and in this case, it really happened." But would audiences be as sympathetic to a male hero who continues his mission after a bullet is fired into the window of his home, narrowly missing his young son? Or to one who doesn't back down after the gangster he's after calls him and tells him he's going to rape the son?

Those things happened to Veronica Guerin and, in the film, when her husband reproaches her and tells her she has to stop for the safety of the family, the movie resolves it by a scene of the couple dancing to "Everlasting Love." There are reasons for not giving in to the kind of intimidation directed at Veronica Guerin. A tougher movie, though, one less interested in feeding myth, would at least have acknowledged the recklessness of Guerin's pressing forward with her articles.

It would also have allowed Cate Blanchett to play the contradictions of the character, to delve into the part of Guerin that was grasping for acclaim. Though nothing she does here is bad, the narrow heroic slot the movie has shoehorned her into makes it feel like a blatant Oscar bid. Blanchett's best and freest moment comes in a throwaway scene with an unbilled Colin Farrell, who's funny and scruffily charming as a young soccer lout she chats with on the street. (He also gets the movie's best line; realizing this woman knows as much about soccer as he does, he exclaims, "Fook me pink!") The best acting in "Veronica Guerin" is done by Ciarán Hinds as Gilligan's henchman (and Guerin's source) John Traynor. Hinds, as usual, looks like a beefy Bryan Ferry, and he conveys the trepidation of a sleazy man far in over his head. McSorley's Gilligan is a very movie-ish thug, but Hinds gives the picture its only authenticity.

"Veronica Guerin" might have gotten by with its worshipful view if it had the compelling tension of a good muckraker. You don't need subtlety for a movie like this -- which is fortunate considering that Schumacher is the director -- but you need a kind of craft that Schumacher doesn't possess. His idea of being gritty is a repetitive, grinding grimness. The shot of young kids sitting on a curb playing with dirty needles is a powerful, if crude, image. Schumacher returns to it three times, and follows it up with a view of a toddler next to a mother who has nodded out with a needle dangling from her arm. When Gilligan beats Guerin, Schumacher amps up the garishness of the scene by showing us the hood's blowsy drunk of a wife watching and laughing. I was willing to give Schumacher points for beginning the movie with Guerin's murder -- there's nothing worse than sitting through a movie waiting for the awful thing you know is coming at the end. But Schumacher can't resist showing us the murder again, and returning to views of Guerin's bloody corpse interspersed with a slow-motion montage of her colleagues and family being notified of her death.

The movie neglects to explain why, at the time of Guerin's murder, she lacked the police protection she was provided after being shot in her home. It neglects a much bigger question as well. How many more people besides Guerin have died because drugs continue to be illegal? That question is beyond the pale for a movie like this, though while you watch it you can't help but see that there's no greater boon to drug dealers than the fact that their product is against the law. But then, as Schumacher has said, the movies are for living out fantasies. Even, presumably, when you're telling a true story.