The left's answer to the Osbournes

A new book dishes the dirt on recently paroled Brinks robber Kathy Boudin and her high-powered -- and completely dysfunctional -- family. 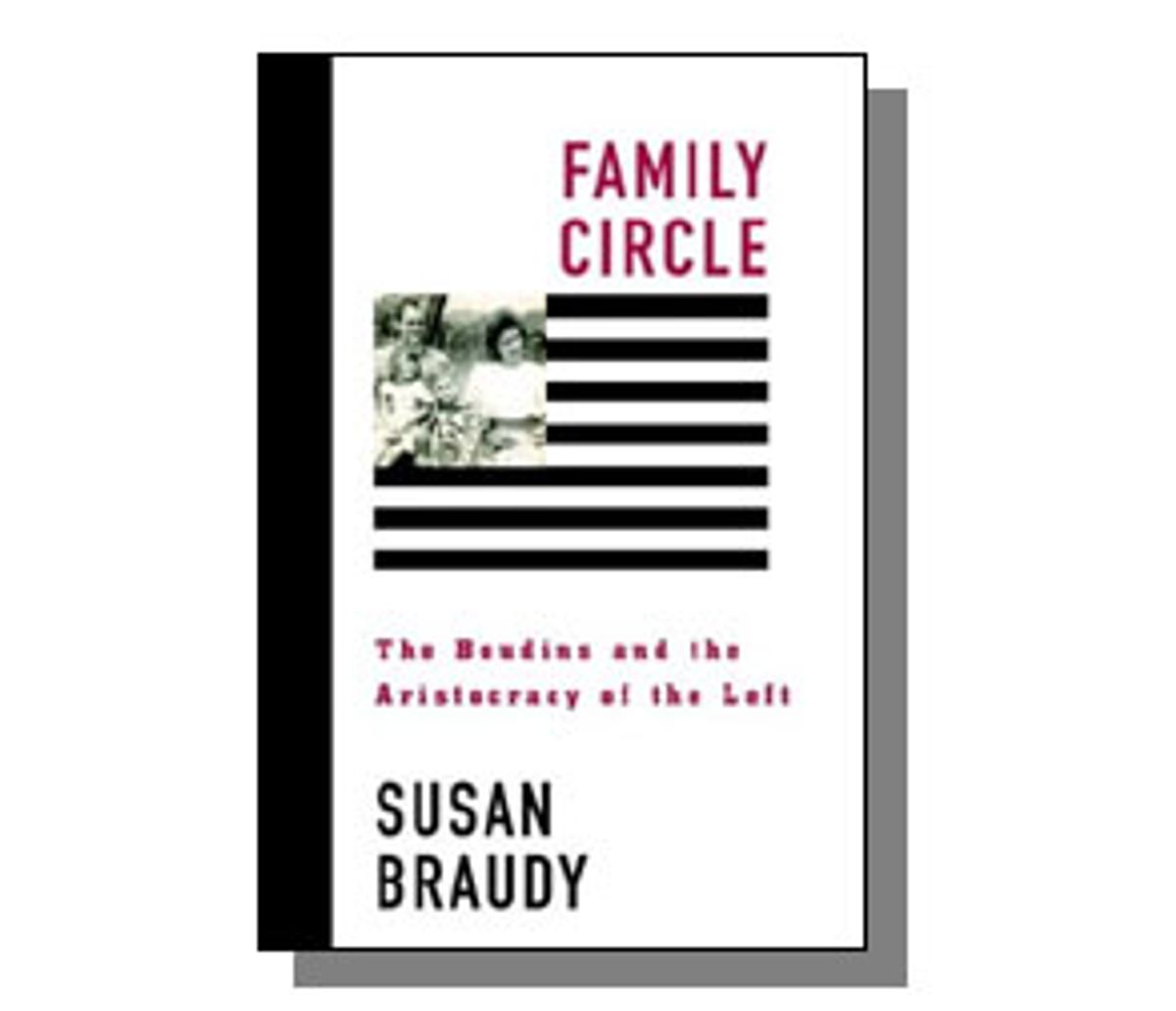 Warning: This article contains scurrilous, unsubstantiated gossip about American leftists. Unfortunately, irresponsibly, unethically, but in some cases deliciously, that constitutes most of Susan Braudy's new book about Kathy Boudin and her family of gorgeous, superconnected, intimidating, idolized and hated radical superstars.

No, I'm not talking about her family of sorts in the Weather Underground, or later, in the "white, anti-racist, anti-imperialist" brigade of compañeros who annoyed every other progressive within scolding distance in the late '70s and early '80s. If you were around and on the left during that time, you probably heard these folks (in organizations called the John Brown Anti-Klan Committee, the May 19th Communist Organization, and the Women's Committee Against Genocide) delivering stalwart but incomprehensible chants like "Sekou Odinga, live like him," and shouting that your own organization promoted "genocide" because you did not endorse violence tomorrow to usher in a special, all-black nation that was supposed to take over six Southern states and live segregated from whites.

Less amusingly, they also participated in (a very scant few of them) or supported (most of them) the violent 1981 Brinks robbery, for which Kathy Boudin served 22 years in prison, until her recent parole. Boudin and her backers saw the Nyack, N.Y., robbery as a way whites could use their privilege to support black insurgents who could more easily be arrested, beaten or killed by police than they. Boudin and three others were assigned by the black activists they followed slavishly to drive the getaway cars. There's a certain courage and nobility to the concept, if you forget that real, live security guards (two of them) and one black policeman were killed in the "expropriation," or that, according to some reports, the particular black activists involved intended to line their own pockets with the money, not build revolution.

There's a racist noblesse oblige to the idea, too, of course: The notion that black people should always be obeyed denies African-Americans' humanity to just as great an extent as the idea that they should always be discounted. There was also, in both the Weather Underground and the John Brown cliques, a certain star-struck, competitive and Hollywoodish understanding of revolution (in which almost all American leftists have at times participated, including yours truly). But the competitive, star-fucking and star-wannabe aspects of Boudin's two groups have been equaled by few -- except by members of her own biological family, the subject of Braudy's book.

With the subtlety of a sledgehammer, "Family Circle" portrays the Boudin parents, grandparents, famous radical great-uncle Louis Boudin and famous uncle I.F. Stone as the collective force that fucked Kathy up. In particular, Kathy's father, Leonard Boudin, a famous -- him, too -- leftist lawyer who represented Paul Robeson, Daniel Ellsberg and the revolutionary government of Cuba, is portrayed as a nightmarishly competitive and withholding dad who forced his children to turn radical handstands to get his love.

Braudy has a point here. In some of the rare fully sourced material in this book, Leonard Boudin comes across as a parent so narcissistic he tried to sabotage his own daughter's achievements in athletics and foreign languages because they were among the few things he wasn't good at. He snarled at Kathy's high school French teacher because Kathy had said the woman was a "genius." He openly seduced nearly every female friend Kathy brought home, and made Kathy and his son, Michael, compete for him with ever-larger, more extravagant and more famous political works. Michael Boudin grew up to be an ultraconservative judge on the Second Circuit Court of Appeals, and Braudy says Leonard nakedly preferred him to Kathy because his achievements were more mediagenic.

Full disclosure: I have my own family connection to the "aristocracy of the left." When I was in high school, a close relative of mine was active in John Brown, and I tagged along to a few events that alternately bored me to tears, disturbed and attracted me. My relative's friends were "older" lesbians (i.e., in their 20s) and one was extremely sexy and offered me a joint. The group's confident preaching style and religious certainty (and even their searing criticisms) also attracted me, at the same time they made me want to dive for the exit. (Seeing them cheer at a video of a cop getting hit with a brick at a London riot made me gag, and not come back.) Later on, I and many other activists who encountered John Brown alumni in our movements of choice (the gay and AIDS movements in my case) found it difficult to refute arguments that came right out of the burning, pulsating core of John Brown-ers' moral certainty, even when our own moral, political and intellectual compasses urged otherwise.

Because, for all I've been talking about star fucking on the left, a great deal of what makes people left stars has been that very confidence and moral certainty. Kathy Boudin had it, which made her utterly insufferable the one time I met her, interviewing her and other prisoners about the AIDS education group Boudin founded at Bedford Hills Correctional Facility. But it also made her found the group, which did so much to improve the lives of women with AIDS behind bars that it seriously changes the way history should view her. Before that, HIV-positive women were harassed and isolated by other inmates, who believed they could get the disease by sitting next to them in the mess hall or using the same shower. Afterward, harassment ended, prisoners with AIDS were supported and often nursed by other inmates, and a peer advocacy group was set up that actually made sure prison authorities gave the right medications and care to anyone with the disease. The group, called ACE (AIDS Counseling and Education), has won numerous social justice awards and been copied in prisons across the country and around the world.

Thinking about this makes me not want to quote the various juicy bits and nasty insinuations that make this book prime beach reading for lefties, but not much good for any other purpose. Most of the assertions in "Family Circle" are unsourced, and where Braudy does give sources, she gives them in a peculiarly unsatisfactory way, in endnotes that say only things like "trial transcript" without identifying who in a trial said them, or that link an interviewee to a single word in a paragraph without giving sources for the much more dubious factoids several words away. She never quotes her documentary or interview sources, which might enable us to judge for ourselves whether the assertions are accurate. But, as I promised, there is gossip, and I'll give a couple of examples just because I lack the high morality of John Brown-ers (for good and ill). To wit: Kathy dated Michael Meeropol (the son of Julius and Ethel Rosenberg) in college! Leonard Boudin had a brief affair with Paul Goodman (so says Leonard's old friend Bert Gross)! Kathy fell in love with a woman in prison (according to Kathy's mother)! Joan Baez said Leonard sexually harassed her (according to one source)!

Sorry, Kathy. It's hard to be a radical left superstar. But thanks for some of the work you've done.