Who's the meanest of them all?

Howard Dean's Democratic rivals cry foul when he criticizes their policies. His sin? Doing so openly, on TV, rather than behind their backs 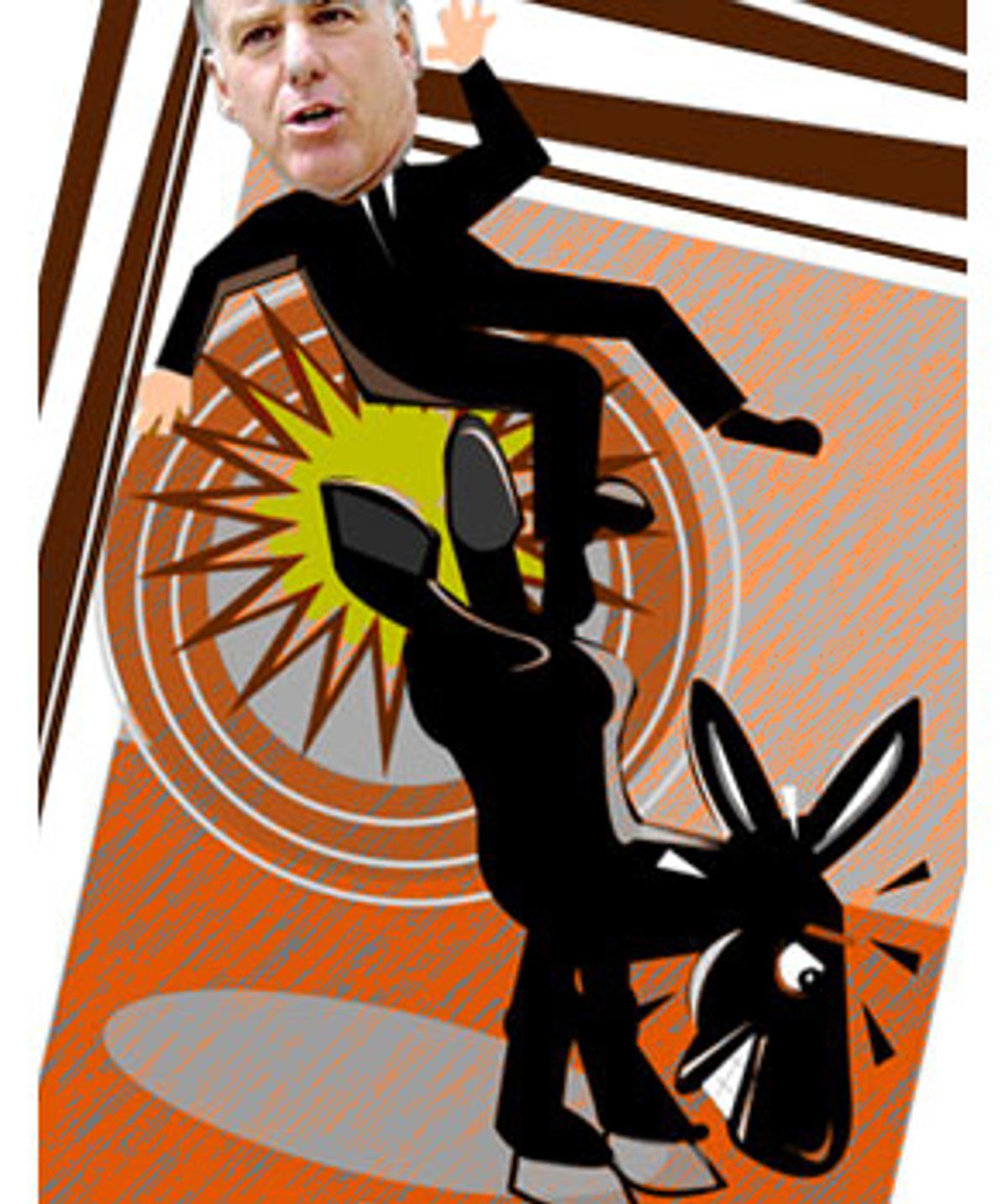 The television commercials come off as somewhere between somber and sedating. Former Vermont Gov. Howard Dean, dressed in a sweater and standing in what appears to be a park, looks straight into the camera and speaks calmly -- about health insurance and prescription drugs in one ad, in another about the war on Iraq. He refers to "my opponents." He says they failed to deliver prescription drug benefits to seniors. He says "the best" they can do about the war is ask questions that they should have asked before voting to authorize George W. Bush to invade Iraq. And then he describes what he has done and what he has said about prescription drugs and the war on Iraq.

That's it. No names, no name-calling, no personal attacks on anyone.

What Kerry's staff didn't say is that Dean  the surprise front-runner in the race for the Democratic nomination for the presidency  has been under attack from his "fellow Democrats" for months. Sen. Joseph Lieberman and Rep. Richard Gephardt have both taken hard shots at Dean in debate. Lieberman has warned that Dean's trade policies would put millions of Americans out of work and cause a "Dean depression," and Gephardt has likened Dean to former House Speaker Newt Gingrich. But in recent weeks, it has been Kerry himself  or at least his campaign  leading the most vitriolic charge against Dean.

As Dean has gained ground in Kerry's backyard -- a Zogby poll released Friday shows Dean leading Kerry by 23 percentage points in New Hampshire -- the Kerry campaign has flooded the e-mail in boxes of political reporters and editors with ad hominen attacks that far out-nasty anything in Dean's new TV spots.

Kerry campaign staffers have attacked Dean for "flip-flopping" on NAFTA. They have knocked him for using a debate gag line written by James Carville. When Dean referred to members of Hamas as "soldiers," Kerry's campaign staff sent reporters an e-mail saying that Dean had "insult[ed] the memory of every innocent man, woman and child killed by these suicidal murders" and proven that "the presidency is no place for on-the-job training." And when Dean suggested that the United States should be prepared for the day when it no longer has military superiority over the rest of the world, Kerry's campaign declared that Dean was "unfit" to serve as president.

But for Kerry's campaign staff, there's apparently no comparison between Dean's television spots and the Kerry campaign's more personal attacks. Because Dean's "attacks" are on TV, they are categorically different -- and necessarily worse -- than anything Kerry's camp might say in blast e-mails sent to reporters. "You're comparing apples and oranges," Kerry spokesman Dag Vega says. "Our e-mails are background information, and reporters can do with them what they will. TV ads are direct communications to voters, where you put millions of dollars behind your message. I think that's a stark difference between the two. I don't see there being much of a link."

To some degree, at least, political analysts agree. Danta Scala, a political science professor at New Hampshire's Saint Anselm College, said the difference between Kerry's e-mails and Dean's ads is "in some ways the difference between talking behind somebody's back and saying nasty things to his face -- once you've crossed that line, there's no going back."

As Scala acknowledges, however, e-mail attacks are sent for a reason: in hope that reporters will see something in them that will warrant a negative story about the subject of the messages. And at times, at least, that hope pans out. The morning after the Kerry campaign circulated its first e-mail about Dean's new ads, the New York Times, the Washington Post and the Associated Press all ran stories reporting that Dean had become the first Democratic contender to run "negative" ads -- a fact duly noted in a follow-up e-mail Kerry's campaign sent to reporters.

Those stories may have at least some incremental value for Kerry, Scala said. By getting the media to portray Dean as a "negative" campaigner, Scala said that Kerry might hope to plant in voters' minds the notion that Dean is just another politician running just another political campaign. "The Kerry people think they're making a point that this is politics as usual from someone who says he's not a politician," Scala said.

But for the Dean campaign, the Kerry e-mail attacks -- and, to a degree, Dean's responses to them -- are just part and parcel of a primary process that has turned into open season on the former Vermont governor. "Governor Dean's opponents have been attacking him and distorting his position," said Dean spokesman Jay Carson. "Governor Dean has been very clear on this: He has a positive record to stand on, and when anyone distorts his record, he's going to set the record straight."

To do that, the Dean campaign has used one of its TV commercials -- the health insurance and prescription drug spot is actually a preemptive defense against the spread of charges some of Dean's opponents made against him previously -- and some e-mail messages of its own. On Sunday, the Dean campaign sent at least two e-mails to reporters: one rebutting a Kerry claim that Dean lacked a plan for Iraq, the other accusing retired Gen. Wesley Clark of taking inconsistent positions on the propriety of the Iraq war. And Sunday in Detroit, the campaign used the candidate himself: Dean went on the attack against Kerry, saying his opposition to repealing the Bush tax cuts and his support for the Iraq war made him "Bush lite."

In their drive to defeat George W. Bush -- and one another -- Dean and the other Democrats are acutely aware of the need to look tough and to answer attacks. Former Sen. Bill Bradley "rather ostentatiously refrained from going negative" when Al Gore attacked him during the 2000 race, Scala said, and Michael Dukakis was slow to strike back when George Bush went after him in 1988. A liberal from the Northeast -- be it Dean or Kerry -- is unlikely to make that mistake again. Indeed, in a recent campaign speech, Kerry said that Dukakis "didn't lose because he came from Massachusetts," but rather because he "believed he didn't need to fight back." Kerry called himself a fighter and said he would fight back -- although he meant it then in the context of fighting George W. Bush.

The Democratic candidates have certainly done plenty of that. While the headlines focus on the intrafamily brawling at the Democratic debates, the candidates devote much more of their time blasting Bush than attacking each other. At one of the earlier debates, midway through an attack on his Democratic opponents, Dean acknowledged that "any" of them "would be better than George Bush as president." And at Sunday's debate in Detroit, Dean said that all of the Democratic contenders support the troops in Iraq better than Bush does. Even Lieberman, who was more critical of his fellow Democrats Sunday than he has been in recent debates, appeared to defend the entire pack of candidates -- even those who oppose the war he supported -- against charges that dissent was unpatriotic. Still, Ronald Reagan's 11th commandment for Republicans notwithstanding, internecine attacks are a necessary part of the primary process -- necessary, some analysts say, and not necessarily evil.

"I've been advocating going negative and becoming nasty way earlier than they've done," said Steffen Schmidt, a political science professor at Iowa State University. "You've got this huge field of candidates, with a bunch of people who are really marginal, and you've got to weed the field down. You've got to show not just why you're better but why the others are not as good."

Dean is doing that -- first by going hard against Bush from the beginning of the race, and now by going on the offense in his TV ads -- and that's why he is leading the pack, Schmidt said. "With a field this large, it's not strange to me that the one who is ahead is the one who first went negative," Schmidt said. "Negative campaigning is part of imprinting yourself, of setting yourself apart from the others. Dean is the first one who went horribly negative on Bush, and that's what made him stand out of the field."

Dean and Gephardt are neck-and-neck in a back-and-forth race in Iowa, and both may need to resort to negative, or at least "comparative," campaigning to set themselves apart from each other and from the rest of the Democratic candidates. After initially attacking Dean aggressively -- the New York Times reported earlier this month that staff for Gephardt and Kerry were informally cooperating to bring down Dean -- Gephardt has mellowed his attack in recent weeks. But in what is perhaps a sign of their own candidate's advertising intentions, Gephardt campaign staffers took issue with the substance of Dean's TV ads this week but said nothing at all about the fact that they were "negative."

And there's little doubt that Kerry will launch negative ads of his own, whenever his staff senses the time is right. "There's got to be a high level of frustration that the former governor of Vermont is so far just pasting the sitting senator from Massachusetts," Scala said. "If he wins New Hampshire, Howard Dean could very well knock Kerry out of the race." To avoid that disaster, Scala says, the Kerry campaign has to "figure out a way to get some of the negative" out on Dean. "They've been doing some of that behind the scenes, and I suspect that they'll eventually get negative [in TV ads] in turn."

In an interview released last week, former President Bill Clinton urged the Democratic candidates to refrain from questioning one another's Democratic credentials. But he didn't say that they shouldn't question one another on their records and their policies. Such advice would be futile and -- in a process that is designed to choose a candidate -- counterproductive.

"The basic point of this process is that we need to know about the strengths and weaknesses of the candidates, and who is going to provide that negative information about one candidate if not the other candidate?" said Northeastern University professor William Mayer. "I'm sure that Dean would love to be running against Bush at this point. But the fact of the matter is, when the New Hampshire primary rolls around, the ballot isn't going to say, 'Howard Dean vs. George Bush.' It's going to say, 'Howard Dean vs. John Kerry.'"