Is this play illegal?

The writer, director and actors of the hilarious New York play "I'm Going to Kill the President" are all anonymous, and getting in is like taking an espionage assignment in East Berlin. 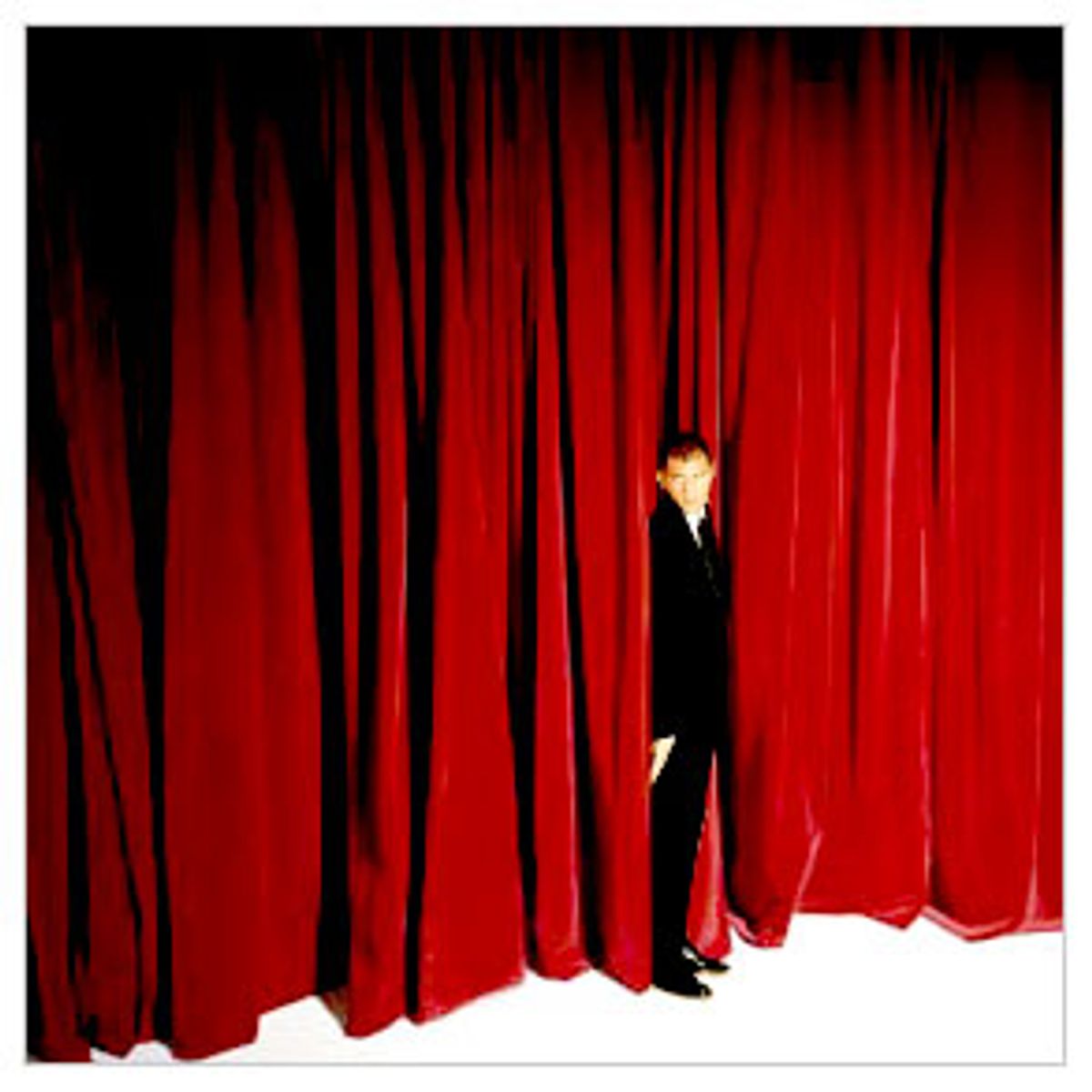 The writer, director and costar of one of the most amusing plays currently running in New York doesn't want his name published. The address of the theater where his show is running is a secret, too. To get there, you must stand on a street corner in DUMBO, a rapidly gentrifying industrial neighborhood in downtown Brooklyn, and wait for an operative to tell you which way to walk. Soon, you'll be intercepted by another agent, who will jog you down the street and quickly usher you into a nondescript doorway, telling you to take the elevator to the 10th floor.

At 8 p.m., once everyone has been shown in, a man in a suit, a ski mask and a comic German accent welcomes you to "I'm Going to Kill the President," a madcap farce about terrorism and apathy in John Ashcroft's America whose performance may or may not be a federal offense.

That legal ambiguity is part of what makes "I'm Going to Kill the President" so interesting. Under U.S. law, threatening the president is punishable by five years in prison. Even prank threats are seriously investigated.

Stephen Wermiel, a professor of constitutional law at American University in Washington, D.C., once found himself on the receiving end of such an investigation. He was an undergraduate student at Tufts University when President Richard Nixon announced the escalation of the bombing of Cambodia. Wermiel and five friends decided to call the White House, bluff their way through to the highest-level person they could get on the line, and deliver a message. They managed to get Nixon's communications director on the phone, and they told him, "Fighting for peace is like fucking for chastity." Five minutes later, the Secret Service called, and told Wermiel and his friends that they were being investigated.

Nothing ever came of the investigation, and Wermiel says that, similarly, it's unlikely that the author of "I'm Going to Kill the President" and his collaborators would be prosecuted for their play. Even if they were, he says, a conviction probably wouldn't survive a legal challenge. "The government has power to protect the president and other people against true threats, and this clearly is not a true threat," he says. "It's artistic license."

Still, he adds, "I can't say that nobody's going to try to threaten these people. In this day and age, with the Homeland Security Office and Attorney General Ashcroft's vigilance, it wouldn't surprise me at all if the people involved in this play get some grief." It's also likely, he says, that some federal security office has a file on the play and the people in it.

Because the limits of free speech and the prevalence of surveillance in PATRIOT Act America are so uncertain, its unclear how much the cloak-and-dagger stuff surrounding the show is a theatrical gimmick and how much is genuine precaution, a confusion the play's creator, whose nom de guerre is Hieronymous BANG, delights in exploiting.

Some of the audience obviously take it very seriously. On my way to the opening-night performance, an operative told me to follow a couple who'd already been given directions to the next rendezvous point. Turning a corner, I saw them speak to a woman with a cellphone and then walk quickly down the street. Running after them, I asked the man, who was middle-aged and wore his long, dark hair in a ponytail, where she'd told him to go.

No, I told him, I'd been told to follow them.

"Follow us? For how long? We're just going for a walk," he said.

"Aren't you here for the play?" I asked.

"That depends," he said.

Not sure if he really was a paranoid asshole or was just playing one, I looked at him quizzically. "Don't give me that pouty face," he said.

He turned out to be a regular audience member, not a plant. But the vertiginous feeling I had speaking with him resurfaced several times in the course of "I'm Going to Kill the President," which aims to leave the audience unsure of just how risky the whole project really is. It's a kind of Rorschach test, measuring the degree to which people now feel themselves being watched. The show's comedy is loose and often goofy, but the construction of the whole experience, which begins the moment you arrive on the street corner, is enormously clever and asks crucial questions about just what country we've found ourselves in.

More than that, the appearance of this play suggests that the current political moment, for all its miseries and depredations, offers new opportunities for the avant-garde, which has suffered from a lack of taboos worth breaking. New York audiences might be inured to artistic shock, but BANG's show still manages to create a frisson of giddy anxiety. At one point, when the actors apparently prank-call the White House on an audience member's cellphone, the audience is led in shouts of, "I'M GOING TO KILL THE PRESIDENT," and there's a tastelessly joyous sense of release in screaming out those six criminal words.

"It seems clear to me that protest art is going to be the next thing," says BANG, a 26-year-old who looks like a more intense version of Gene Wilder. "It seems like every artist should be seizing on this. I just don't understand why everyone isn't jumping onboard like it was the Summer of Love or something. I can't fathom being an artist who isn't outraged and, as an artist, not feeling like you need to respond to it somehow."

BANG himself, who's gotten conflicting advice on the legality of his play, isn't exactly sure how perilous his project is. "We have to see what the climate is and we have to push the envelope," he says. "We have to be as outrageous from the left as the stuff we have to put up with coming from the right to create any sort of balance."

The politics of the play itself, as opposed to the larger experience of it, are outrageous but also incoherent. The plot, such as it is, centers around Skip, a revolutionary who's bereaved after his girlfriend, Bess, handcuffs herself to a Southern senator and sets off a suicide bomb in a posh Washington restaurant. (When he objects, she cries, "Don't go Gandhi on me now!") He's played by an amazingly quick, dolefully funny actor whose name, like everyone else's in the show, is redacted in the program.

Dejected and on the lam, Skip meets NYU student Fifi at an Identity Fair, where she's shopping for a new persona. Alternately sarcastic and bubbleheaded, she coos, "I've never met a real revolutionary before," to which he responds, "Well, it's a word used only in advertising, and even then incorrectly."

Soon, she's signed on to his plan to kidnap the president, igniting so much chaos in the country that the United Nations, also known as the Superfriends, will be forced to intervene and install a "puppet democracy," as it has in various other nations troubled by "corrupt regimes" and "screwy elections."

Skip and Fifi set off on an insurrectionary picaresque, meeting a violent, armless veteran of Gulf War I, a group of activists driven to sectarian meltdown by the challenges of ordering a pizza, Fifi's "edgy, arty" ex-boyfriend, and Ralph Nader. They are dogged by a feral green sleeping bag that attacks the politically uncommitted, turning them into reactionary zombies, and by the Man, who tries to steal Fifi's heart with fantasies of bourgeois comfort.

Threaded throughout are all kinds of genius low-tech gags and humor that alternates between bleak deadpan and manic physical comedy. There's a tour-de-force three-way phone call between a cop, the dean of NYU and the head of Homeland Security in which BANG plays all the parts and, toward the end, a repeat of an early scene entirely in French. Like the bastard child of Valerie Solanas and Mel Brooks, BANG combines an astonishing talent for fleet-footed physical humor and rapid-fire repartee with a kamikaze downtown nihilism.

That nihilism means it's better not to take the play's politics too literally, since they sometimes devolve into radical-chic juvenilia. At one point, BANG plays a sleazy, trench-coat-wearing purveyor of traditional politics, selling Democrats out of one side of his coat and Republicans out of the other -- the kind of thinking that gave us Nader's 2000 candidacy and, by extension, President Bush.

Later, playing the Man, he makes his unctuous come-on to Fifi by arguing that, for all its faults, America is the freest country on earth, saying, "Ask some poor wretch living in a tin shack in some democracy-forsaking corner of the world." The statement is meant to be self-evidently vulgar and hypocritical. If you agree with it even a little -- as many who've spent time in the shantytowns of corrupt Third World countries do -- the scene leaves you feeling like one of the priggish targets of BANG's lacerations.

Not that revolutionaries get off easy, either. There's a hilarious scene in which Skip's agrarian free-love utopia is enacted with cardboard puppets. Still, he's clearly the hero of the piece, saving Fifi from a life of moderate mediocrity, while the less ardent are devoured by the sleeping-bag Borg.

But the offensiveness of this is, in a way, part of the play's delight -- it jackhammers both broader American pieties and the sensitivities of the well-meaning liberals likely to attend it, even as it leaves them doubled over with laughter.

As you leave the theater, it's not entirely clear whether you've participated in something illegal. "I'd like there to be that doubt: 'Am I really now going on some list in some database?'" says BANG. The sign of the times isn't the play itself, uproarious as it is. It's the fact that one might have to worry about having seen it.