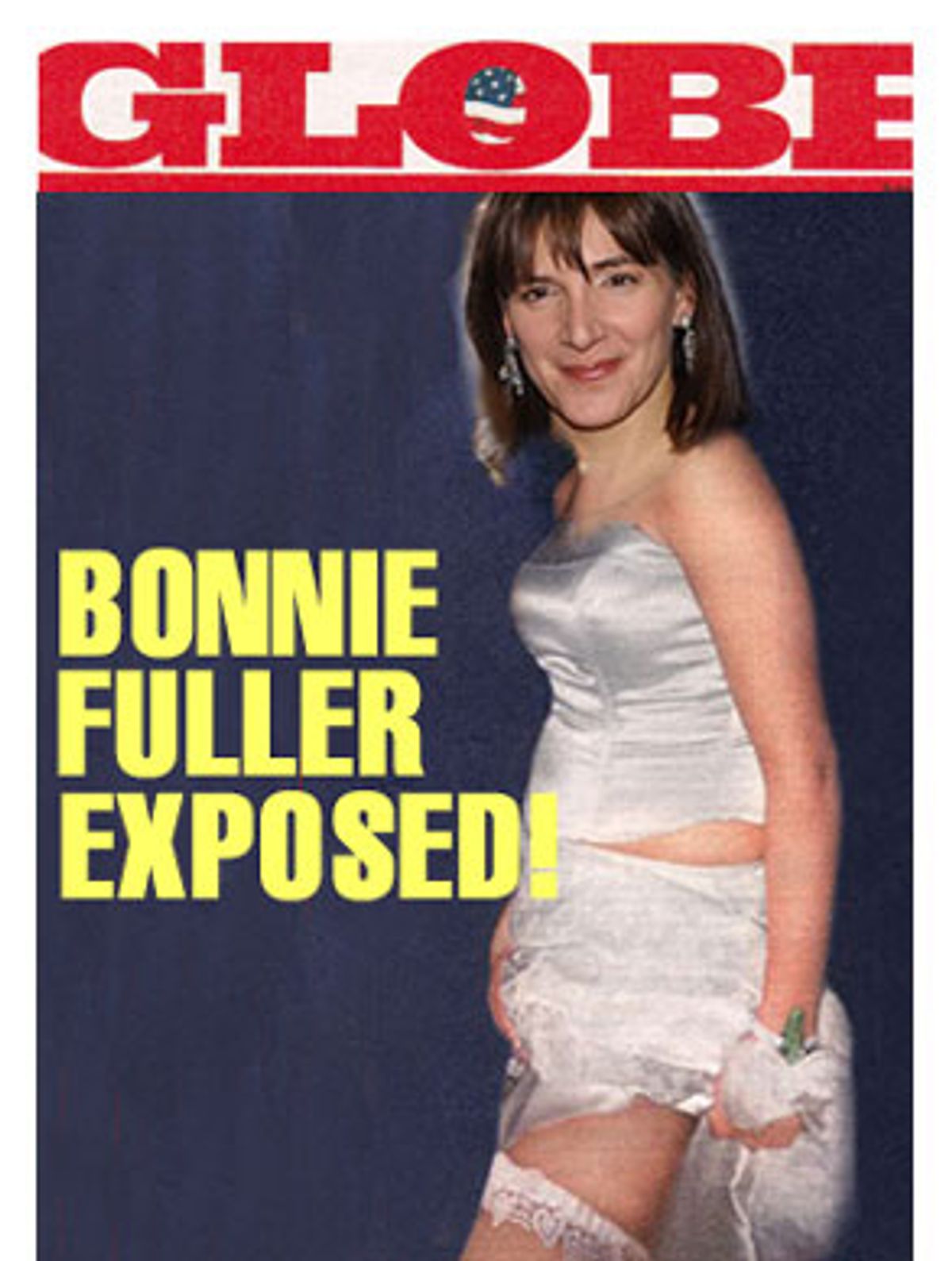 The ugliest celebrity spectacle of the year -- the sexual assault prosecution of NBA star Kobe Bryant -- took a notable turn Thursday, when the supermarket tabloid the Globe published a salacious high school photograph of the accuser on its cover. In it, the woman is lifting up her prom dress to reveal a garter belt. The headline reads: "Kobe Bryant's Accuser: Did She Really Say No?" Next to the photo, in half-inch type, is the 19-year-old woman's name.

The world -- particularly the journalism world -- does not usually pay close attention to the scandal sheets. But there is good reason to this time. For one: the Globe's behavior has been followed in the past by the mainstream media. Back in 1991, it was the Globe that broke with the journalistic tradition of protecting the identity of possible rape victims and revealed the name of the woman accusing Kennedy scion William Kennedy Smith of raping her. NBC and the New York Times eventually followed suit.

The other reason, though, is because the influence of the tabloid press has undeniably increased in recent years. And a main reason for that is the woman -- and lightning rod -- editorially in charge of the Globe: Bonnie Fuller.

Fuller, a veteran editor (Glamour, Cosmopolitan, Marie Claire and YM), spent the past two years revamping the weekly celebrity gossip magazine Us Weekly with enormous success. At a time when circulation and advertising sales were on the skids for magazines, Fuller raised Us' newsstand sales a whopping 55 percent. This summer, she left Us to take on the editorial directorship of American Media, the company that publishes the Sun, the Globe and the National Enquirer, for a package reported to be worth more than $1 million. Though she has focused most directly on the rejuvenation of the company's flagship magazine, the Star, Fuller technically presides over the editorial decisions for each of American Media's titles, including the Globe.

Fuller told the New York Post that she knew of the Globe's plans to publish the name and photo of the woman but said that she "would not have interjected" herself into the magazine's editorial structure by killing the story. "The Globe did what was within their mission," she told the Post.

"Bonnie did not make the decision to put that [image, name, and headline] on the cover. Candace Trunzo, the editor of the Globe, did," said Richard Valvo, vice president of corporate communications for American Media, adding, "Bonnie made the decision not to pull it." (Fuller was out of town and unavailable for comment; Trunzo did not return calls.)

One, however, could easily argue that deciding "not to pull" a story is the same thing as deciding to run with one.

"She's the editorial director of the company," said Barbara O'Dair, editor at large at Time Inc., and the former editor in chief of Teen People and Us Weekly. "She obviously gave her tacit approval."

And if the Globe's big reveal on the identity of Bryant's accuser gets picked up by other publications reporting stories like this one, the arm of the tabloid press will have extended even further into the legitimate press.

"The tabloidization of the American media is horrid and unstoppable," said Stephen Isaacs, a professor of journalism at the Graduate School of Journalism at Columbia University, who teaches a class on ethics. Mr. Isaacs, who is somewhat unorthodox in his view that journalists should publish the names of accusers in rape cases, went on, "I think naming her is cool, but running a picture of her with a garter belt -- that's mawkish and obviously meant to sell papers. That is the tabloidization of the American press."

For many people, the line between the tabloid press and the legitimate press is already indistinguishable, said Geneva Overholser, a professor of journalism at the Washington bureau of the University of Missouri School of Journalism and the former ombudsman of the Washington Post. Overholser had not seen the cover of the Globe, but after hearing a description of the layout, she called it "the worst kind of journalistic voyeurism." She, like Isaacs, believes that situations like the Kobe Bryant case serve as an argument for making the identification of alleged rape victims standard.

But to magazine editors in New York, particularly women editors, the ethics involved in naming a possible rape victim took a back seat to the look-at-me nature of the Globe's cover.

"I think every female editor who woke up this morning and saw that in the paper probably had their breath taken away," said Us Weekly's editor in chief Janice Min. "I just looked at it and thought, Oh my God, that's so wrong."

Min was not critical of Fuller, her predecessor, saying only, "I think it probably got additional attention because Bonnie is there and she came from the mainstream press and that is why it came across as an unusual decision."

But Min did not hold her fire when it came to the Globe's editorial decisions.

"It is misogynistic and truly exploitative to try to get big sales off of identifying an alleged rape victim," said Min. "Was a woman dressed inappropriately? Did she ask for it? Is a sexy woman more likely to get raped than a non-sexy woman? These are the anachronistic, horrible ideas that come up because of a cover like that. Morally, it's wrong."

Min's objections were strongest when it came to the cover-photo choice.

"I would imagine that they probably have plenty of photos to choose from," she said. "I don't think any of them would have been right to run. The fact that they chose to run one of her in lingerie is galling.

"It is clearly implied on the cover that maybe she deserved it," Min continued. "This is someone's worst nightmare. This is why a lot of sexual assault victims don't come forward."

"I think it's one thing to show a face, and we can all debate that for a really long time," said Lucky editor in chief Kim France, trailing off momentarily. "Personally I'm against it, but I think it's a valid debate. But taking a photograph of a girl at her prom, having fun with her femininity, at a moment when everybody's allowed to feel free and sexual, and using it with the headline 'Did she really say no?' in the context of a rape case? I think that's horrifying."

While the photos sent shock waves through some corner offices in Manhattan, some female editors, while troubled by the photos, were not at all surprised by them.

"As a journalist I just can't say, 'Man, am I surprised to see that in the Globe!' said Ellen Levine, the editor in chief of Good Housekeeping. "It's the Globe."

And Roberta Myers, editor in chief of Elle, said, "I am personally of the school that out of deference to the victim you do not publish an image of her face. You just don't do it, unless the victim is willing to identify herself."

But, Myers continued, "The fact that it is damaging to that particular woman or that it is something that a lot of journalists wouldn't do doesn't mean that it's a total surprise on the cover of the Globe. It's not like the Times did it."

O'Dair agreed. "They're doing what they're trained to do. These are attack dogs, they go for the jugular. And they are just going to go for whatever will rake in as much money as possible."

"What's the hot market right now?" asked Lesley Jane Seymour, editor of Marie Claire. "Celebrity journalism, tabloid journalism. Tabloid journalism has really been absorbed into the mainstream media and ironically you have the bottom of the barrel -- the Globes and the Stars -- going upscale [by hiring editors from legitimate media organizations], which is completely crazy and hilarious. Because usually people find the biggest audiences by going downscale."

A big part of the tabloids' trip up-market has to do with Fuller, who is currently engaged in remaking the Star as a celebrity-gossip-must-read in the spirit of Us and In Touch.

She worked miracles at Us, transforming the snoozy movie rag into the guiltiest journalistic pleasure of the last decade. Her move to American Media surprised many of her former colleagues, and the controversy over the Globe cover on her watch may illustrate exactly why her decision to officially abandon "respectable" journalism was so risky.

As O'Dair pointed out, Fuller's statement to the Post that running a story like this was within the publication's mission was fair: "She's absolutely right. That's what she signed on for."

But France may be dreaming. In a conversation with Marie Claire's Lesley Jane Seymour she casually used the alleged victim's first name -- which she had learned from the Globe -- three times on the record. When I pointed this out to her she laughed mirthlessly.

"Yes, I know I said her name," said Seymour. "Once it's in the Globe, it doesn't matter whether it's right or wrong, the taboo's broken and the name is now part of the lexicon. They have a huge circulation. It's not like it was revealed in Mother Jones."

As for the Fuller issue, Seymour said, "She says she didn't have anything to do with it, but there's a lot of pressure for everybody in journalism to make a buck today and that's the bottom line.

"I certainly don't know what she had in her mind, but unfortunately with media today you have two bosses: your bosses who care about ethics and readers, and your bosses in the marketplace of media conglomerates."

Ellen Levine, of Good Housekeeping, did not quite damn the publication. Though she said that she doubted a case like this would stir any legitimate debate of these issues, she expressed her own confusion about whether journalists should shy away from naming victims.

Declaring that she was not referring to the Bryant rape case specifically, Levine said that she thought a lot about what happens to men who are accused of rape, publicly identified, and then found innocent.

"Why does the man get drawn and quartered while the woman is garbed in a journalistic burka?" she asked. "I'm not saying that I know the answer. Just that I think it's a timely question. And of course the Globe's going to choose a picture that's racy. And if it sells very well they'll be doing a lot more of it."

O'Dair pointed out that the mainstream media's handling of the Bryant case hadn't been exactly heroic. She noted that Bryant was honored at the Teen Choice Awards, which were held in Los Angeles a month after he turned himself in to the police. Bryant and his wife, Vanessa, appeared at the ceremony, which was broadcast on the Fox network. He accepted the award for favorite male athlete, and was greeted with a standing ovation.

"I thought it was interesting that Fox saw fit to honor Kobe Bryant after charges were filed against him," said O'Dair, whose former title, Teen People, hosts the Teen Choice Awards. "It was certainly a bad move on their part. And it perpetuated a really complicated view of heroism for kids to try to understand."