Waiting for the command to start killing Americans

In Sadr City, a friendly young Shiite shopkeeper buys me a 7 Up, then says he wants his ayatollah to call for jihad. And he's not alone. 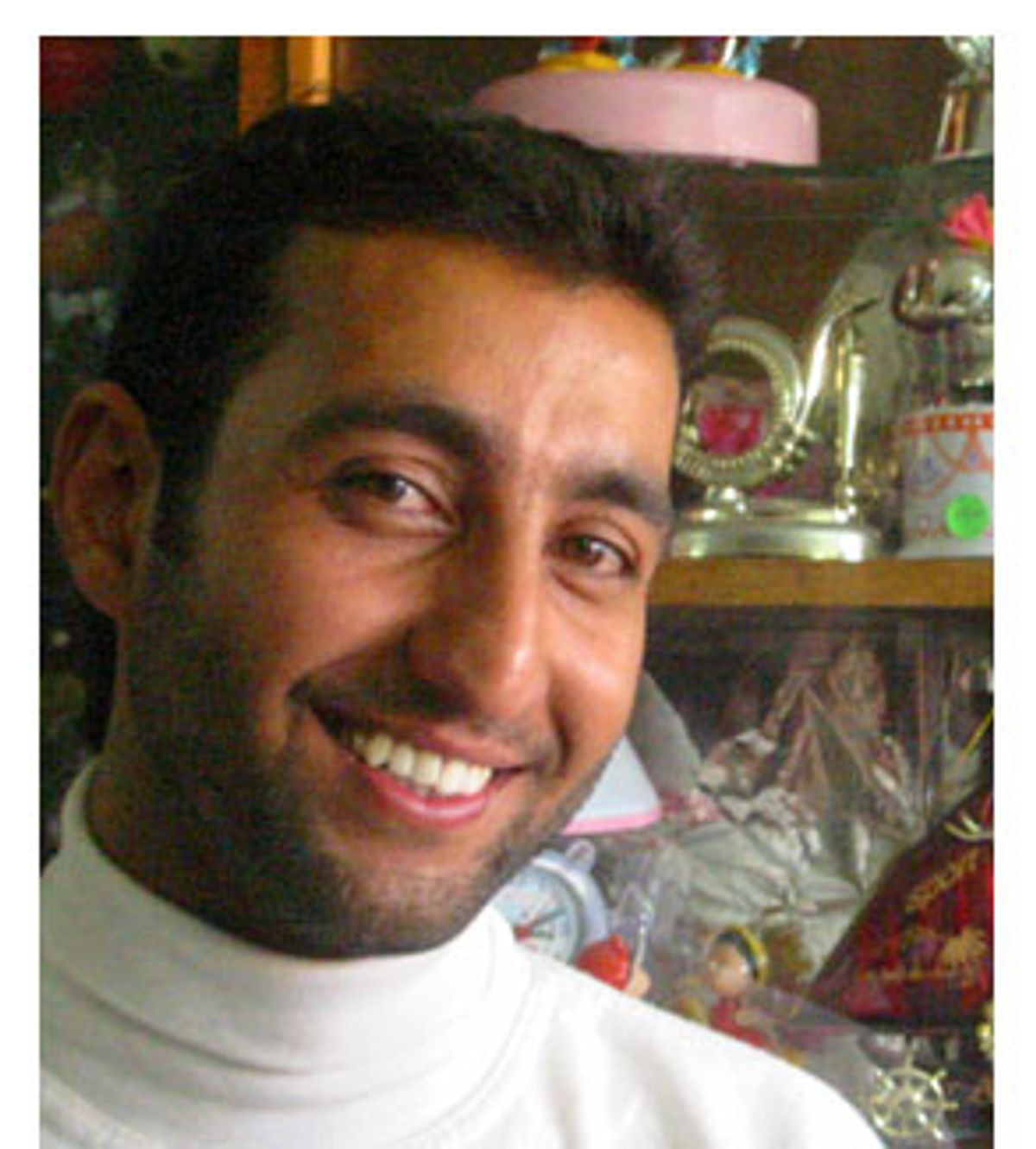 I met Ithir yesterday when I visited Sadr City, the poor, crowded area in northern Baghdad that is home to more than 2 million Shiites. Ithir works in a small shop that sells an eclectic combination of inexpensive items: stationery, pens, plastic clocks embellished with plastic flowery geegaws, picture frames rimmed with hearts, some Barbie paraphernalia, and brightly colored prints depicting the Grand Ayatollah Ali al-Sistani. Though the young Shiite leader Muqtada Al-Sadr has attracted a lot of attention lately for his strong (albeit inconsistent) opinions about the American occupation, al-Sistani remains the most widely followed and respected Shiite leader in Iraq. Ithir, who holds a master's degree in computer science, is devoted to Sistani. He goes to his local mosque regularly and, like any good Muslim, is fasting for the month of Ramadan.

However, one issue leaves him at odds with Sistani. Ithir desperately wants his ayatollah to declare jihad on the Americans, so that he can start killing American soldiers.

This is not good news. Ithir is a Shiite, and Shiites are supposed to love the Americans, or at least not hate them as much as some of the other Iraqis do. The way the Bush administration lays it out, the anti-U.S. violence is coming either from the Sunni minority (Baathists who want the Americans to leave so they can reclaim the stranglehold on the country they enjoyed under Saddam) or from foreign terrorists.

But things are a whole lot more subtle and complicated than that. A lot of the Shiites, like Ithir, are furious at the Americans and ready to kill. And Shiites make up 60 percent of the country; they're well-organized and have clear leadership and command structures. If they go, the Americans won't be facing the occasional roadside bomb or rocket-propelled grenade. They'll be facing a full-on nationwide insurrection.

When I entered Ithir's shop, he greeted me with an almost beatific smile and immediately went next door to buy me a 7 Up (though he could probably ill afford it and though he, himself, couldn't drink anything -- even water -- until sundown). He continued to smile warmly throughout our conversation, while he explained in soft, matter-of-fact tones, why he hoped he would soon be given the green light to start killing Americans.

Like so many other Iraqis I've spoken to, Ithir feels profoundly angry and discouraged about the state of his country. America is the most powerful nation in the world, right? The swiftness with which the Americans won the war inspired (as planned) both shock and awe. So why, Iraqis wonder, can't the occupiers improve the situation in Iraq right now?

Iraqis tend to see the ongoing problems with security, power, sanitation, leadership, etc., as either a purposeful strategy on the part of the Americans or a type of malign neglect. As one young Shiite told me, "During Saddam, we heard lots of promises. 'Iraqis will be on top in technology,' et cetera. But it's only words on paper. We think Americans are the same. They make promises without keeping them. Like the phones -- they say we'll have them, but we don't believe it anymore. They say a week, then a month. A year will go by." When I ask these men whether they can see today's deprivations as a tradeoff for the new freedoms they have, especially the ability to openly criticize the current situation, I often get the same answer: "Yes, now we can talk," they'll say. "But what does it matter if no one is listening?" Another expression I hear lately is an old Arab saying: "A man who has seen death and survived, is satisfied with a flu." Saddam was the flu -- the situation now, people tell me, is death.

It's a tricky issue, one the American postwar planners couldn't or wouldn't grasp: Many Iraqis did OK under Saddam. He may have been a murderous tyrant, but if you kept your head down, you could usually get by. And there was no crime, and no car bombs, and the phones worked.

Ithir was charming, and he was driving me crazy. He says he wants to kill the Americans -- even die himself -- and then a second later, tells me he doesn't actually want them to leave. He believes that jihad against soldiers here will force the American government to pay attention. Force them to act more decisively in fixing the mess they created. Change will only come if enough Americans go home in body bags.

Ithir represents a growing number of Shiites whose initial gratitude toward America for liberating their country (and religion) from Saddam has been supplanted by suspicion and even hatred. "How do you define American freedom?" he asked. As I fumbled toward an answer, trying to remember salient quotes from the Bill of Rights, he said, "I will tell you the definition of American freedom for Iraq: America takes our oil and gives us crime."

Of course, not all Shiites feel the way Ithir does. He acknowledges that many of his friends have tried to persuade him that jihad isn't the answer, that the Americans deserve more time. Maj. Basim Hummadawi, with whom I met at the Sadr City police station, agrees. He says that Americans should have unmolested calm in which to set up a representational Iraqi government and rebuild the country before handing it back, in full, to the Iraqis. "It's not time for violent action," he told me. "The people must resist with ideas, not guns."

Hummadawi sat behind his desk in a newly painted office. On the desk: a phone, a few papers, his pistol, and an empty red Slim Jim can whose label depicted the Incredible Hulk, apparently trying to escape the bonds of two-dimensional life. Though Baghdad is getting a little cooler every day, it's still hot enough to make for some serious sweating, especially when the power is down and the fans out of commission (as they were when I sat with the major). Lately, too, the fly population has increased at an astounding rate (no doubt in part because of the six-month curbside smorgasbord of uncollected garbage they've enjoyed), and these flies have a strong attraction to faces. The major and I politely conversed while maintaining a steady pace of face flicking.

I asked the major about the bombings of police stations. He believes that non-Iraqis -- extremists pouring in from neighboring countries -- blew up the police stations and Red Cross headquarters in order to create enough chaos and instability within the country to grow a revolution. The major thinks the Americans need to tighten border controls significantly, with help from Iraqi police and soldiers.

So how much time, I asked, should the Americans get before even the Iraqi police will turn against them? He replied without hesitation. "Two years."

The major admits that not all the violence of the recent weeks is imported. Saddam loyalists have their own compelling reasons for maintaining chaos, pressing the Iraqis to lose further confidence in the Americans. And, to the extent that some Iraqis now think of life under Saddam with a kind of nostalgia, it's working.

Abu Ali is a Shiite from Najaf. He is also a former Baathist, as are many of his friends and family. When he speaks, especially in greeting, his voice has the roughness of a frog straining toward a pit bull's growl. Get him to laugh, though, and you're rewarded with a gleeful, almost girlish giggle. Abu Ali's father entered the Baath Party near its inception, when its Arab-nationalist and socialist philosophy attracted intellectuals and idealists who saw it as the best road to an Iraqi state free of the dictatorships and puppet monarchies the country had suffered under for years. "Saddam hijacked the party," says Abu Ali. "He killed many, many of the original members. He killed many, many Shiites. We have no love for Saddam."

When I first came to Iraq, I made the mistake -- one shared by occupation head Paul Bremer -- of equating membership in the Baathist party with loyalty to Saddam. "De-Baathification" -- an American policy according to which none but the lowest party members are allowed to work in the government, by far Iraq's largest employer -- seemed like the only way to fully rid the country of a rancid Saddam aftertaste. But of course this, too, adheres to the Iraqi rule of thumb: It's just not that simple.

Abu Ali spoke to me about the current ramifications of de-Baathification while teaching me how to make Iraqi-style kebab one afternoon, right before iftar -- the sundown break-fast meal of Ramadan. He moved around the kitchen with quick grace. Before adding ingredients to the base lamb/beef mixture -- salt, garlic, flour -- he would pause to make sure I had the chance to observe the amount. As he worked, Abu Ali told me about a growing network of Shiite Baathist resisters uniting in the south and in Baghdad. These are not the pro-Saddam Sunni Baathists of the so-called Sunni triangle in the north. These are bureaucrats and technocrats. Men who, in their minds, were working for the state and not Saddam. Men who, in the wake of de-Baathification have found themselves shut out, not only from Iraq's present, but from any possible future. With no expectations of working again if the Americans remain in charge here, they are uniting to push the Americans out.

"Here is the problem," Abu Ali says. It is later, after iftar, and we're sitting outside to make the most of the cool evening. While we talk, an apparently nocturnal rooster crows now and then down the street. "Before the war," says Abu Ali, "Americans said, 'Our problem is with Saddam and his closest senior officials.' We Iraqis also had the same problem with them. But when the Americans made the issue general and fired all the Baathists, they basically were saying, 'Go fight for Saddam.'"

Abu Ali blames Ahmed Chalabi, the exiled leader of the Iraqi National Congress -- who was embraced by the neoconservative architects of the war -- for many of the problems. "Chalabi fooled the Americans by saying there were no more than ten thousand high-ranking Baathists and it would be easy to get rid of them. But in fact there are 1,700,000 Baathists who have been pushed out. And they are all fighters. You can imagine what a catastrophe. They have no means of living. They are being targeted. They have no hope. There is no place for them in America's Iraqi future. Why not fight then?"

So far, he tells me, the Shiite Baathists haven't joined the violence in any real way. Instead, they meet, plan, make contacts with other resistance groups -- even with former members of the fedayeen (Saddam's hand-picked cadre of guerrillas) and the mukhabarat (the former secret police). He named four mostly Shiite neighborhoods of Baghdad -- including Sadr City -- where Baathists cells are forming. I asked Maj. Hummadawi whether he knew of such groups. He said, "Of course if I knew of them, I would have to do something about them." But he admitted that he had heard stories of resistance groups offering up to $4,000 (perhaps from Saddam's own wallet) to good fighters willing to join the cause.

Abu Ali does not plan to join the resistance. But he knows many men, like Ithir, who will. When enough Iraqis feel powerless, ignored, voiceless, the situation might explode to levels way beyond the vicious events of the past few weeks. So far, the violence has consisted of disparate acts of terrorism. A united resistance would make for a whole different ballgame.