If the Rolling Stones weren't already staid and ancient, then their new coffee-table book might make them look that way. Its saving grace: Keith Richards. 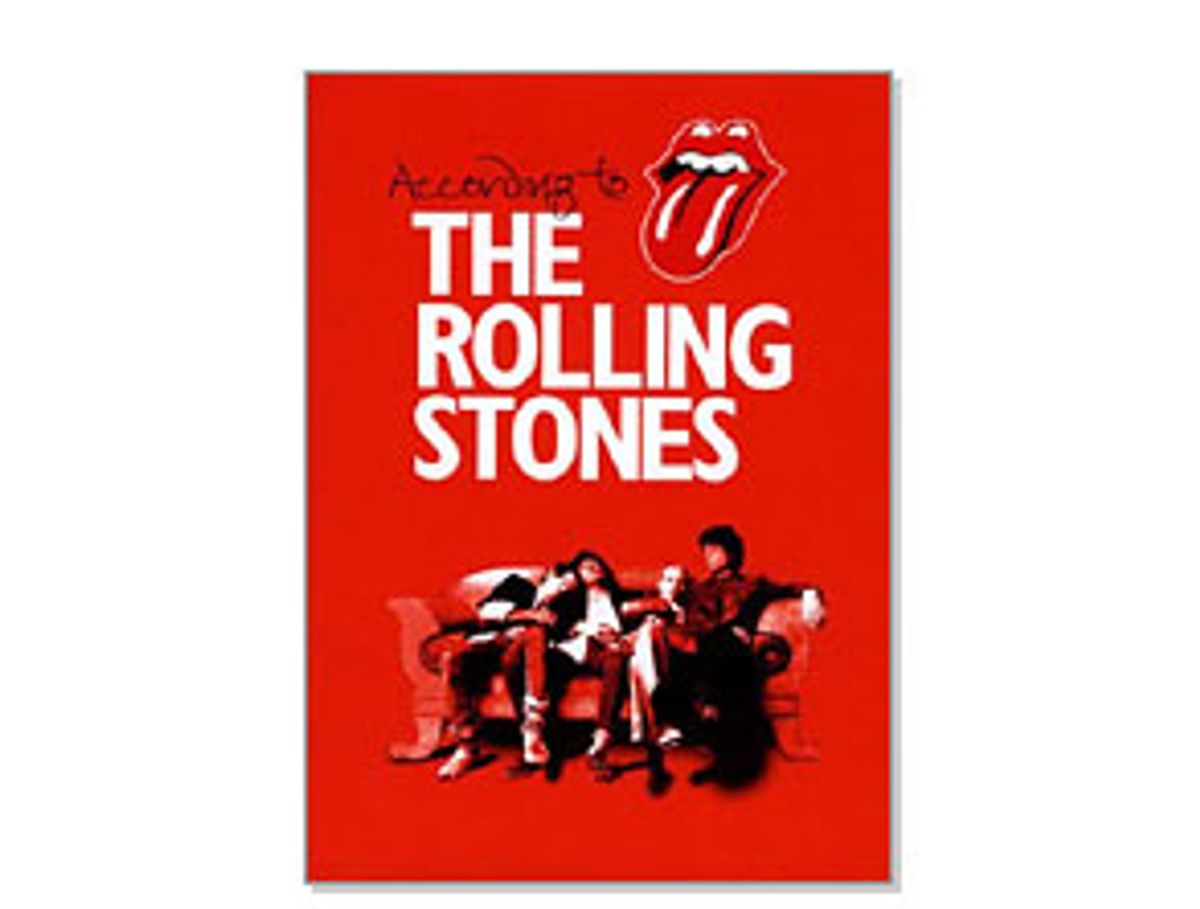 There's only one reason to read "According to the Rolling Stones," and his name is Keith Richards. I wonder if anyone else who's spent any time with this semiluxurious, bloaty tome has had the same experience: I started out looking at the pictures (there are lots of them), and then dutifully proceeded to reading the text, in which Richards, Mick Jagger, Charlie Watts and Ronnie Wood recount the band's story in their own words. (Longtime bass player Bill Wyman is a spectral presence who blows through now and then, when the others remember to mention him.) There's the reliable, eternally elegant Watts (who reveals that on "Street Fighting Man" he played a 1930 toy drum kit that folded up into a little suitcase, and which he still has); the affable, regular-guy guitarist Wood (whose dad stopped calling him just plain Ronnie and began calling him "Ronnie Wood of the Rolling Stones" when he joined the band in 1975, replacing Mick Taylor); and old-granny-in-a-dress Jagger, who sounds mostly as if he's waiting for the prune juice to take effect ("'Exile on Main Street' is not one of my favorite albums, although I think it does have a particular feeling ... I had to finish the whole record myself, because otherwise there were just these drunks and junkies. I was in L.A. trying to finish the record, up against a deadline. It was a joke").

Jagger, God love him (because somebody has to), comes off as an almighty pest, and Wood and Watts are perfectly charming and occasionally incisive. But after cruising through some 100 of the book's 360 pages -- or is it 3,600? -- I found myself bypassing just about everyone else and heading straight for Keith.

Who else is going to come right out and say, "After all, the only thing Bill [Wyman] did was to leave the band and have three babies and one fish-and-chip shop!" (And on the next page, when he says, "I love Bill dearly," you absolutely believe it.) When the others speak of poor Brian Jones, they make tiptoeing pronouncements about his insecurity, his low self-esteem, his confusion about his own direction and how it meshed (or, more accurately, didn't) with that of the band. Keith -- who had, of course, hooked up with Jones' girlfriend, the glamorous, long-leggedy-beasty Anita Pallenberg -- says, "He was a pain in the arse, quite honestly."

For those who want to know more (and who doesn't?), in another passage he lays everything out in more detail: "With Brian it was all self-consuming pride. If we'd been living in another century I'd have been having a duel with the motherfucker every single day. He would stand on his little hind legs about some piece of bullshit and turn it into a big deal -- 'You didn't smile at me today' -- and then he started to get so stoned, he became something you just sat in the corner."

Poor, dead Brian. And yet there's something bracingly sympathetic about the way Richards talks about him -- as if he realizes that making mealy-mouthed pronouncements about the dead does them no favors.

Even more than that, Richards, with his plain talk and his dedication to showmanship even when he's being interviewed for a book and not performing, is exactly the kind of voice the Stones need right now. The Stones, it seems, want to be both a legend and a working band. How does any band pull that off, after sticking together (more or less) for 40 years? Even though rock 'n' roll seems to have been around forever, the Stones are only 10 years younger than the form itself; in that context, records like "12 x 5" and "Aftermath" are rough parallels to the cave drawings at Lascaux.

In theory, I wholeheartedly believe that you're never too old to rock 'n' roll. But in practice -- well, I haven't been interested in a new Stones record in years. Yet I can't help being fascinated by the Stones themselves, partly because so much of their work has given me such great pleasure over the years, and partly because I'm awed that they're still kicking around. I respect them for that, and in a way, I feel sorry for them: When the Beatles broke up, the fracture seemed premature, a crack in the universe the world wasn't ready for (even if the band members themselves had more than had it by then).

But the Stones never granted themselves the luxury of leaving their audience wanting more: Instead, they've gone on playing past the point where many of their fans might have preferred less. And now they've stepped over yet another line, edging even closer to Steve and Eydie-dom: They've put out a coffee-table book about themselves. How un-rock 'n' roll is that?

"According to the Rolling Stones" is one of those leaden Christmasy books, the kind of thing desperate wives, girlfriends, moms and daughters buy for the men in their lives when they have no idea what else to get. In the book and elsewhere, the Stones are very cagey about their unspoken competition with the Beatles. Supposedly, of course, there was no real competition between the two outfits -- and the cover of "Their Satanic Majesties Request" looks nothing like that of a swinging little record that the Liverpool four just happened to have put out some five months earlier.

In yet another feat of bold non-imitation, "According to the Rolling Stones" has the same glassy-eyed stiffness as "The Beatles Anthology," released a few years back. It's amusing enough to dip into, but there's something dispiriting about trying to read the damn thing -- you begin to feel like one of those obsessive completists who ostensibly loves music so much he can't bear to actually listen to it anymore, preferring to marshal facts and anecdotes and recording-date thingamabobs, which are much more manageable than the slippery moods and feelings that music teases out of us.

All that said, "According to the Rolling Stones" does have some nice pictures. Covering the band's nascence in the early '60s (in their trimly cut mismatched clothes, they looked much more "street" than the Beatles, and cooler in a rufty-tufty way) right up through the release of the 2002 retrospective "Forty Licks," the book is reasonably useful as a visual record of who the Stones were and who they have become.

There's a photo of the elfin Wood curled up uncomfortably in a guitar case, like a cat who has adamantly decided to have a nap in a box that's way too small for it. We get numerous pictures of the dapper Watts, who has aged the most beautifully of all the Stones -- young or old, he manages to come off both dapper and utterly, likably regular at the same time. And, of course, there are many, many pictures of Jagger looking self-important, both with and without makeup. Let no one accuse me of being unfair to poor Mick, though: I pick on him only because he invites deflating like no other rock star, not least because his place in the rock universe is so firmly assured. And there are photographs here -- including one very famous one, taken by David Bailey, of Jagger in a fur-trimmed hood, a blasé hipster Eskimo who's just dropped in from the land of cool -- that cement his position in the pantheon of the most beautiful creatures of the '60s.

And yet, again, it's Richards you can't look away from. The Richards of the late '60s and early '70s had more innate, scruffy elegance than any other rock star of his (and perhaps any) era: Swathed in scarves and decked out in chunky silver jewelry, he's both dashing prince and exotic princess, sly seducer and debauched maiden, a man so completely in control of his masculinity that he can't resist wrapping himself in its feminine complement. But he never came off as fey or affected: His look wasn't about bending genders, and it wasn't an art-school statement. Striped pants, ruffled blouses, white leather boots with lizard-skin cap toes: It appears that he simply wore (and to this day, continues to wear) what he likes, not as an affront to conventional notions of how men should look, but as an outright reinvention of them -- a way of saying that all men have something of womankind within them, and vice versa, so why not take advantage of all the available options?

And despite his infamous excess, Richards seems to remember more colorful details than anyone else in his band. At one point, Charlie Watts tries to downplay an episode during the '80s -- a period during which, he admits, he was drinking heavily -- when he went for Jagger: The group was spending some time in Amsterdam and Jagger decided he wanted to speak to Watts. Jagger got on the phone, asking, with obvious insolence, "Where's my drummer?"

"He annoyed me," Watts explains, "so I went storming upstairs and told him not to say things like that."

Keith picks up the story and runs with it: "There's a knock at the door and there's Charlie Watts, dressed in a Savile Row suit, tie, hair done, shaved, cologne. He walks across to Mick, grabs him and says, 'Never call me your drummer again' -- bang. On this table is a great silver platter of smoked salmon ..."

For the rest of the story, you'll have to read the book. Or at least just the Keith sections. At one point, Richards fumes about being hounded by law enforcement goons on both sides of the Atlantic, simply because they wanted to make an example of him as a symbol of excess: "At the end of the day you don't mess with me. There's no point in doing it. I'm only a guitar player, I write a few songs. I'm a troubadour, a minstrel -- it's a long-established profession. That's all I do. I don't have any big aspirations. I'm not Mozart."

Maybe that sounds a little too self-effacing, coming from one of the most revered guitarists in rock history. But it also sounds astonishingly sensible. Maybe next year's hot Christmas item should be one of those little books that grace bookstore checkout counters everywhere -- "The Wit and Wisdom of Keith Richards." It could even come with a companion volume: "Keith Richards' What Not to Wear," including tips for making a staid daytime outfit suitable for all-night rockin' just by adding a few key accessories, like a skull ring or a Moroccan scarf. Keith Richards is a man who knows how to live, and there's plenty we can learn from him. Chicken soup for the soul, bloody 'ell.