Her second awful children's book, "Mr. Peabody's Apples," is a finger-wagging, moralistic tale that condemns a kid to permanent guilt for a very minor sin. 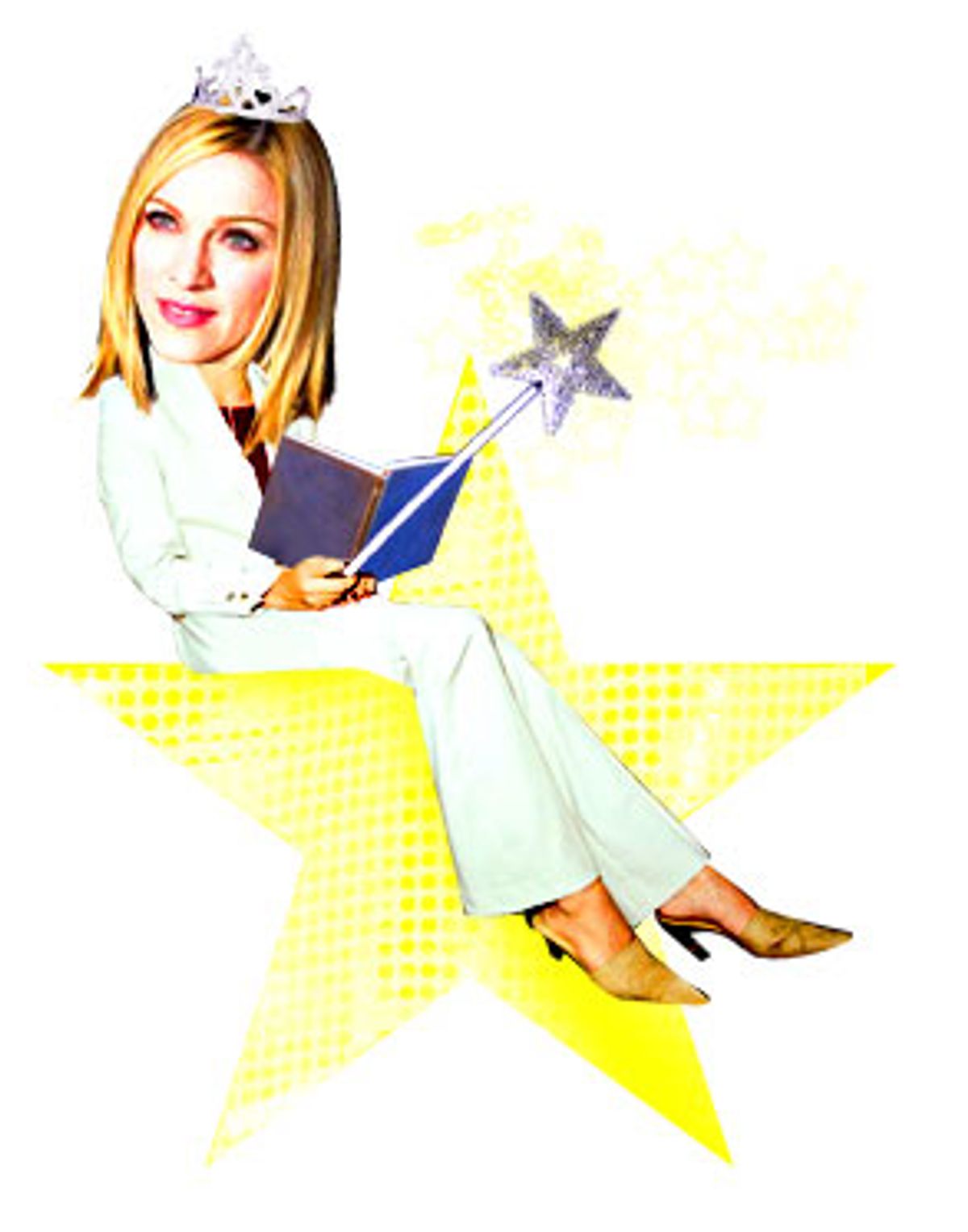 By now it is pretty much impossible not to know that Madonna published a children's book in September and that people ran around buying it as if she were the next E.B. White. "The English Roses" came out in 30 languages and in more than 100 countries, and it's very British and fashiony -- the story of a clique of good-looking schoolgirls who ostracize another, even better-looking girl. Despite its moralizing tone and anti-feminist message, the book is bouncy and flirty, like a track off an old Madonna album, "Dress You Up" or "Open Your Heart."

"Mr. Peabody's Apples," Madonna's second effort, descends on the planet this week. It is neither bouncy nor flirty. Set in an idyllic 1940s small-town America where boys play baseball every weekend, it's the story of a benevolent (or malevolent?) teacher who helps an earnest young boy learn a lesson that will last a lifetime. While "The English Roses" is both shockingly bad and deeply appealing -- much like Madonna used to be, jiggling her boobs around and singing "Oooh, I'm gonna keep my baby!" -- "Mr. Peabody's Apples" is dour and joyless, despite the pretty masculinity of Loren Long's Norman Rockwell-style illustrations.

To my mind, celebrity children's books are inherently annoying. The average story told by the average parent is meandering and filled with clichés. But if that parent is famous -- Shaquille O'Neal, Jerry Seinfeld, John Lithgow, Lynne Cheney, Sarah Ferguson, to name a few -- then book contracts land in their laps and promotional budgets are stretched to the max, no matter how insipid the text. (Yes, I am bitter and jealous, being a children's book writer myself. But I am also right.)

Publishers and shoppers choose fame and badness while clever, meaningful picture books by people like Petra Mathers or Chris Rashka lie untouched on the shelves. What's worse, these are celebrities the children have never even heard of! Sure, kids want books with the name Elmo on the cover -- but it is most definitely the parents who are seeing the name Madonna or Seinfeld and deciding that this must be a quality product for the still-forming brain of a person who is not even completely potty-trained. What do these adults say when they give the book to their children? "This is a special book because it's written by a man on TV that Daddy likes"? or "I know it's hokey, but you should like it because the lady who wrote it can sing really well"? or "Remember that woman from the Weight Watchers ads who used to be married to a prince? It's by her!"?

I can see that it may be impossible to stop children from wanting things they see on TV, and from believing that those things are better than other things that are not on TV. But must we really exacerbate the situation by enthusing over celebrities whose names mean nothing to our children and whose names as brands have no current association with the product actually being sold? Buying a Shaq picture book is somewhat similar to buying Shaq jam.

Also, I liked the young Madonna better. Poor thing can't help getting older, I suppose, but I liked that in-your-face, blowsy boy-toy from the '80s; and that oversexed, unashamed provocatrix from the early '90s. Now she's gone all electronic and maternal and spiritual. Her face looks hard. I used to be interested in her sexual adventures, her beauty, her unabashed materialism and her bouncy pop beats, all of which appear to be over. I am definitely not interested in her personal growth or warm-fuzzy parenting -- and that is what I get in reading "The English Roses" -- and even more so in "Mr. Peabody's Apples," which is based on a story told to Madonna by her cabala teacher.

"The English Roses" has a slightly Austin-Powers-y retro feel. The 10-year-old characters wear ultra-chic schoolgirl frocks and matching coats; they have huge wide eyes and no noses; they dance around on bold, color-block backgrounds. Life is good for this little clique (the English Roses of the title). They picnic and party, their joy marred only by a girl named Binah who is better-looking than any of them, and a good student, too. Grown-ups love her -- so the Roses hate her and won't let her play.

Then they find out she's poor and has to scrub floors and do laundry, and that she's actually an absolutely perfect person (her poverty hasn't impeded her ability to put together a stunningly cute outfit). They invite her to a tea party, and then they all live happily ever after having fun.

Madonna makes every mistake common to beginning children's writers. She tells rather than shows: "They were all a little bit jealous," she writes of the Roses. "[Binah] was special." The girls are passive receptors of adult knowledge, learning their lesson with no struggle. Here's the message, as delivered by Nicole's Audrey Hepburn-type mother: "How would you like it if people decided whether they were going to be nice to you based on how you look?"

The characters are completely undifferentiated. Binah is a saint with no discernible personality beyond beauty and excellence at household chores. Frankly, this ideal of girlhood went out with the 1950s, and to see Madonna of all people endorsing it is disturbing. I wanted Binah to kvetch at her single father while she scrubs the floor and does the laundry; to be angry at the mean, popular Roses; to have a collection of bugs or an interest in vampire movies -- anything that suggests a mind in rebellion against the pure, blond angel she appears to be. The Roses learn Binah isn't a snob. But they don't actually learn who she is -- because she isn't anything. She never speaks, except to say "Okay, Papa." She's the feminine mystique.

I do not want my daughter to read this book.

I don't want her reading "Mr. Peabody's Apples," either -- which is so overtly moralizing there is no fun whatsoever to be had. Once again, children are depicted as passive receptors of adult wisdom, but here, the misguided semi-protagonist ends up in a guilty, never-to-be-redeemed limbo for his relatively innocent crime.

Mr. Peabody is a schoolteacher and baseball coach. One day, a boy named Tommy Tittlebottom sees Peabody apparently steal an apple from the local grocer. He tells his friends. Soon the whole town believes their beloved teacher is a thief. As soon as he hears about it, Peabody proves his innocence. The grocer confirms that Peabody pays in advance each week for an apple a day. Tommy apologizes to Mr. Peabody and asks how he can make amends. But instead of telling Tommy it's OK and forgiving him, Peabody has him slice open a pillow and let the feathers blow across a field. He then tells Tommy to pick them up, which is impossible. "It would be just as impossible to undo the damage that you have done by spreading the rumor that I am a thief," Peabody says. "Each feather represents a person in Happville."

To my mind, this is nearly as horrible a message as the idea that feminine virtue is a slim, silent, domestic saint. True, people should consider the incredible power of their words. But Peabody will likely redeem his reputation very quickly, since the grocer is happy to tell everyone in town that he buys the apples in advance. Poor Tommy, a gossip who nonetheless believed he was exposing a thief, and who apologized and offered to make reparations, has probably been scarred for life by being told it is impossible ever to do adequate penance for his mistake. He's done irreparable damage, the book tells us, and Mr. Peabody is a good man for making sure this little boy knows it.

Why is anyone buying these books? Besides slavish celebrity worship and a misguided sense of the books' morals, I can think of two other reasons. First, they look fantastic. In "Roses," illustrator Jeffrey Fulvimari has created a world of hyper-stylish childishness that may be politically questionable but which is undeniably fun, and Loren Long's muscular, rubbery paintings have beautiful plays of light and a still, detailed beauty in "Peabody."

Second, they are picture books with a significant amount of text, geared to older readers. Madonna's books are short enough to be bedtime stories, and sophisticated enough not to embarrass a 10-year-old. Unlike most chapter books and early readers, they are pretty objects; the first book even comes encased in a special little book sleeve. Once children begin reading on their own, they generally don't have access to those kinds of full-color pictures. Even more rarely do they get them in a book about everyday social interactions, since most longer, text-heavy picture books tend to be fairy tales or fantasy. As such, I think "The English Roses" -- and to a lesser extent, "Mr. Peabody's Apples" -- may be filling a gap left by the publishing industry. We don't have older-child picture books, and maybe we should.

It's just too bad that as one of the most powerful entertainers in the world reaches for a younger market, Madonna's not telling readers to question authority or listen to their own hearts. She's telling them to listen to their misguided elders, and she's doing it badly to boot.