The author of "Cookoff" discusses the intense -- and thoroughly modern -- world of competitive cooking. 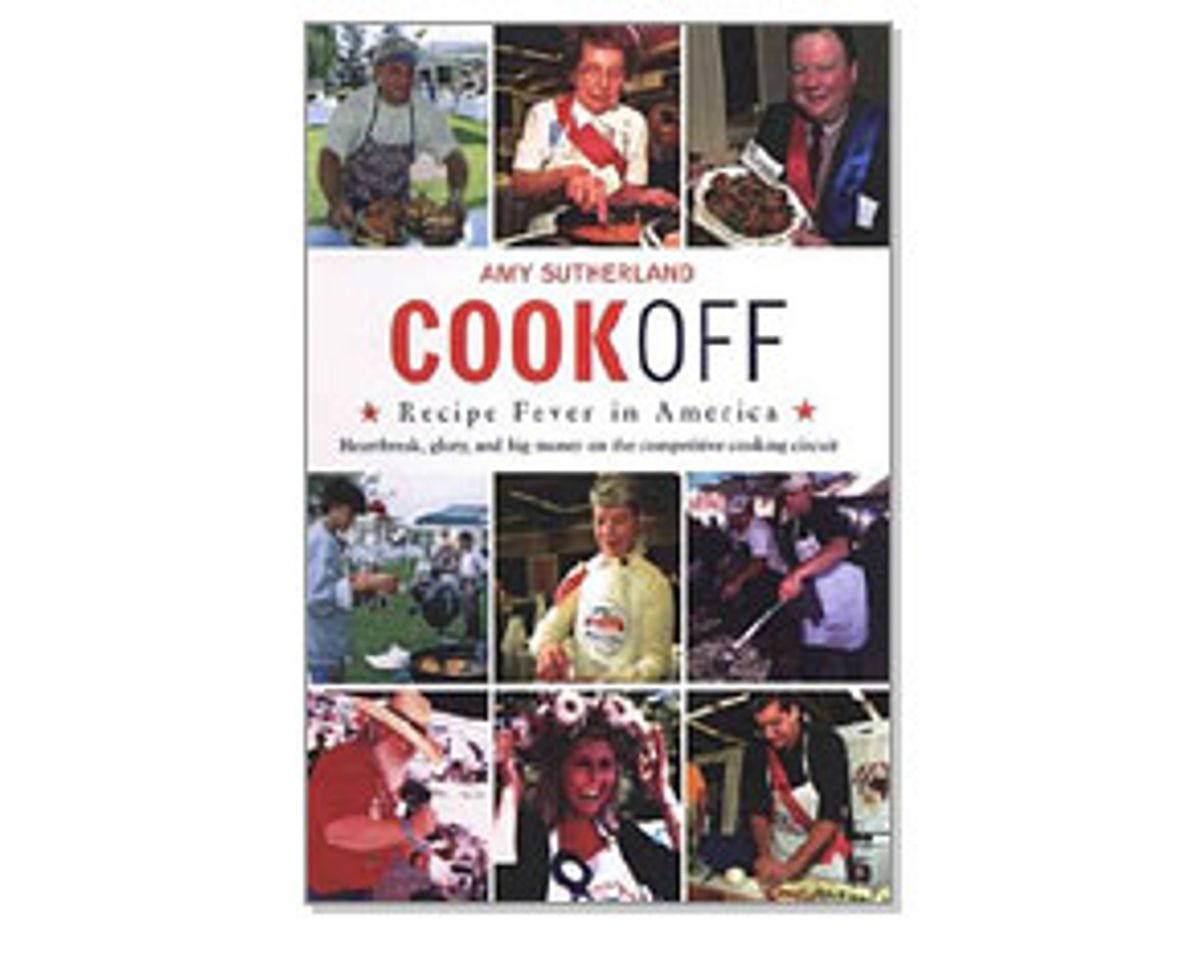 Thanks to reality television like "The Restaurant" and the Food Network's series -- "Date Plate," "Food Fight" and "Iron Chef" among them -- the high-strung cooking show has become a staple of many TV diets. But the cooking face-off, it's worth remembering, has a long history.

Cutthroat cuisine had its start in the county fairs and brand-sponsored recipe contests that dotted the nation during the 1950s. But as newspaper reporter Amy Sutherland found out, those cooking-trials still exist, and instead of nostalgia fests that bring blue ribbons and prize sows to mind, the cook-offs now have higher monetary stakes and attract an increasingly modern group of contestants.

Sutherland spent two years trekking around the country for her book "Cookoff: Recipe Fever Hits America (Heartbreak, Glory, and Big Money on the Competitive Cooking Circuit)." She attended events like the Gilroy Garlic Festival, the National Chicken Cooking Contest, the National Beef Cook-Off, and the granddaddy of them all, the Pillsbury Bake-Off.

Sutherland recently spoke to Salon from her home in Portland, Maine, regarding her misconceptions about the world of competitive home cooks, the way the subculture is adjusting to a changing world -- and some really gross recipes.

So how did you get hooked by the cook-off world?

I was invited to the 2000 Pillsbury Bake-Off because we finally had a Maine contestant going. That got wheels turning for me. I was intrigued that the Bake-Off was still around and still very vibrant in a day and age when more women were working and American cooking was getting so much respect. It was a strange anachronism, this thing that was still kicking.

When I got there I realized that if I pursued amateur competitive cooking I would find out not only more about people and cooking, but I would find out more about my own country. I know that sounds corny, but as you can tell, I sort of fell in love with the whole world.

Yes, and that was off target. A lot of people still presume that the cooking competitor is this cook that no longer exists -- a Midwestern housewife in a little clean apron. But the contests have kind of come a long way with the country on both the cooking front and the working-women front; there were more professionals than full-time homemakers in the 2002 Bake-Off.

I met a female forensic scientist, an air traffic controller -- a woman. One of the people in my book, Liz Barclay, is the assistant principal at a private school in Annapolis with a Harvard degree. Then one of my favorites, Camilla Saulsbury, was finishing her Ph.D. in sociology.

Are the competitions another way for ambitious career women to flex their competitive muscles?

Professional ambition has fueled these contests. A lot of the contesters are Type A during the week, and you know we carry those habits over into our kitchens at night. In general people are much more ambitious cooks than [they] used to be. There are ambitious ethnic dishes, ambitious Thai concoctions that they can't even pronounce. Something about the contests appeals to the Type A quality. What sort of catches people off guard is the intellectual and creative element. You not only have to be a good cook -- you have to be an extremely creative cook, and you have to be a strategist.

How much time does it require to participate in these?

The contesters know how to do this pretty efficiently. It takes them less time than, say, me, because once you get going you develop this bank of recipes you can keep tweaking and twisting. What's cool about cooking as a hobby is you can do it in your everyday life. This aspect just takes it a whole step further, and turns it into a way to win prizes, take fancy trips, even develop a social circle.

This social circle -- is it a bit eccentric? Are these people like Trekkies?

Well, they all know each other. I would say that it is a mainstream subculture. They don't have bad hygiene! I don't know if you read Word Freak, but at some point I was just like, "I can't spend any more time with these people!" But cooking contesters come from more walks of life and they're doing something that pretty much anybody would be somewhat interested in. They've created a subculture but out of a mainstream group. There's nothing weird about them. Some people may think it's weird that they're very serious, but that's how they win. That annoyed me, the making fun of the contesters for being serious, but there are thousands of dollars at stake! You'd be insane not to take it seriously.

Who makes fun of them?

Well, food editors at newspapers who refer to them as being professionals. They get accused of sour grapes when they don't win, as if it's not a serious competition. And of course these are serious competitions, but because it's cooking, which is still considered a feminine activity, there's all this pressure on them not to take it seriously.

Do those gender implications also get worked out in the competition?

Sure. Women are uncomfortable competing, and some of a certain generation have not had experience competing -- they didn't even grow up with high school sports. And cooking is a "feminine" activity, but competition is not considered feminine. So they get all twisted up inside. That's why I like the chili, barbecue and jambalaya contests, because there are more men, and men are comfortable about competing and make no bones about it. The women can have this neurotic niceness to them -- helping each other out, being supportive and polite. They can undermine themselves sometimes! There's one woman, Pat Harmon, who is one of the few who say, "I'm here to win!" But so many others are like, "I'm just here for the experience, blah blah blah." Look, do you want to win a lot of money or not?

What about the contests are particularly American?

If you lump all these U.S. contests together, there are over 1,300. It is a uniquely American pursuit. There's the overall competitive urge; we think of competition as a good thing and also a very democratic way to test yourself, to prove yourself by your own wit. We still like our food fun and entertaining and we also like it as theater, which is why we spend so much time watching the Food Network while the statistics for people actually cooking go down. It also encourages our faith in the ordinary man or, in this case, the ordinary cook. They reaffirm our general faith that an everyday person can be just as creative as an expert, which I really like, because I think we are getting a little too carried away with chefs.

What's the best dish you tried at one of these contests?

This is gonna sound crazy, but I thought Camilla Saulsbury's winning Post Select Brunch Cook-Off entry was a pretty ingenious thing. They had to use one of four cereals and pretty much everybody went with sweet things. But she ground up Great Grains cereal and used it to make Caribbean-style crab cakes. And one of my big complaints with crab cakes is that they are often so mushy. She's the one working on her Ph.D.

And then at the end of the book, I write about a recipe I thought was a stroke of utter genius at the first Southern Living contest: to stick a pecan pie in a cheesecake. I mean, it's awful sweet, makes my teeth hurt. But what a brilliant idea!

Did reporting on these contests change your own cooking style?

Well, I was a pretty devoted recipe follower and it's really loosened me up. And now I sort of come up with my own recipes, which I never in 100 years would have done before. Just this weekend we were walking the dogs before brunch, and I was thinking about the beef brisket we'd had over the weekend. And I began to think, "Is there a way to make a barbecue version of eggs Benedict? An eggs benny with beef brisket instead of Canadian bacon, and mix barbecue sauce into the hollandaise?" When I come back from California I'm going to give it a crack!

Once you start cross-pollinating it's hard to stop. It's sort of scary how deeply satisfying it is. I'm shocked at how I brim with pride when I come up with something.

Have you come up with anything that's actually good?

Well, I entered these burgers into the Sutter Home 2002 cook-off and they've become our standard burger. I was playing with what would be an Asian-style cheeseburger. So I make a burger with a ton of fresh ginger, garlic, soy sauce, and rice vinegar in the meat. And then I use a soft, mild goat cheese and an eggplant relish that has hoisin sauce in it and throw mung beans on top to give it a crunch.

What was the worst thing you ever tasted at one of these contests?

The Grand Slam cornbread at the National Cornbread Festival was pretty appalling. It was made by the only guy in the cook-off and it had a pile of hotdogs cut up in chunks, sauerkraut, hot sauce and a cornbread topping to it. It was like some nightmare hotdog potpie. But even more scary was that the male judges on the panel liked it. But the female judges talked them out of it.

Then there was the fudge at the 2000 Pillsbury Bake-Off, made with a can of white frosting and candied fruit. Then they just let it firm up. I know the judge used the spit cup on that one. You can't blame him.

So are you completely sucked in by these contests now?

Yeah, I'm sort of sucked in. I sort of follow it like a sport now, and look to see who's won what.

Did you witness any serious diva fits on the cook-off floors when you were reporting the book?

I saw what seemed like a seismic event that was about to happen at the Pillsbury Bake-Off to a contester who is the husband of a long-time contester. He's a retired general and a very serious, efficient cook. He was almost done, and he was cooking -- he wasn't talking or chatting -- and he was ready to go with his banana fudge baby cakes. And he's about to put a scoop of ice cream on them and a runner tapped him on the shoulder. Now he's a tall man, so he didn't see her coming and she surprised him. Well, that scoop of ice cream fell -- kerplat! -- on the plate and ruined the presentation.

He didn't say anything but I know when it's time to get away. I mean, it was ruined! He did some muttering under his breath, turned red in the face, and I ran for it.