"Looney Tunes: Back in Action"

Bugs and Daffy invade the real Hollywood in this manic farce from director Joe Dante -- but the result is an exhausting mess. 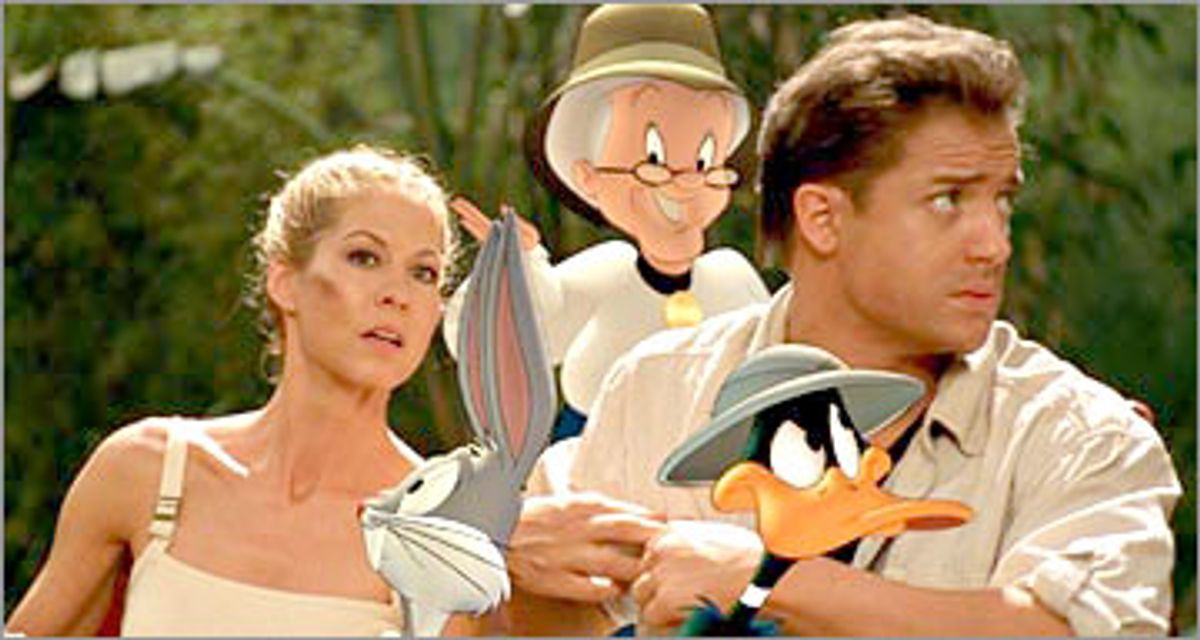 Warner Bros. has sent out prints of its new movie "Looney Tunes: Back in Action" with an attached trailer for next year's big holiday family release, a creepy-looking digital version of Chris van Allsburg's picture book "The Polar Express" directed by Robert Zemeckis. The contrast is instructive. Zemeckis and Joe Dante, the director of "Looney Tunes: Back in Action," started making features at roughly the same time. But while Zemeckis has abandoned the crazy comic style of "Used Cars" and "Death Becomes Her" for the uplift of "Forrest Gump" and "Contact," Dante has stayed true to his hyperkinetic smart-alecky movie-mad sensibility.

In pictures like "The Howling," parts of "Gremlins" and the far gentler "Matinee," and especially in the exhilarating "Gremlins 2: The New Batch" and "It's a Good Life," his startling contribution to the omnibus "Twilight Zone: The Movie," Dante has shown a surefire instinct for pop anarchy. Filled with references to old horror and sci-fi movies, rock 'n' roll, comic books, forgotten and revered icons of kitsch culture, Dante's movies zap you between the eyes, making you laugh even as you can't believe what you're seeing; maybe because you can't believe what you're seeing. The sight of a theater full of gremlins tossing popcorn like evil little kids and singing "Heigh Ho, Heigh Ho" along with Disney's Seven Dwarves or, in the sequel, a more highly evolved Gremlin turning into William F. Buckley made me feel like rockets had been attached to my feet and I'd been blasted into the funnysphere. At his best, Dante gives you the sensation that hell is breaking loose on the screen.

That's why the prospect of having him revive Looney Tunes (which, for me, hold a place with Buster Keaton and Preston Sturges in the pantheon of American movie comedy) is enough to get your mouth watering. But "Looney Tunes: Back in Action," written by Larry Doyle, is manic while being only sporadically funny.

Part of the problem is that, except for the best sections of "Who Framed Roger Rabbit," the combination of live action and animation has always felt awkward, an uneasy mingling of two distinct worlds. Dante doesn't solve that problem here. It doesn't help that the familiar characters are seen in three-dimensional versions that trash our memories of their original form. And he hasn't provided opportunities for the human performers (Brendan Fraser, Jenna Elfman, Steve Martin and Heather Locklear among them) to break out into the sort of uninhibited physical comedy that could hold its own against the Looney Tunes repertory company. (In addition to Bugs Bunny and Daffy Duck, Yosemite Sam, Elmer Fudd, Wile E. Coyote and Pepe LePew turn up, and characters like Michigan J. Frog and Ralph the Sheepdog pass by in the background.)

The plot has to do with a Warner Bros. executive (Elfman) trying to locate Daffy Duck and woo him back to the studio after she's made the career-ending move of firing him, and a studio security guard (Fraser) on a mission to aid his dad (Timothy Dalton), a movie star who plays a spy and, in real life, really is a spy. This setup allows Dante to make some jibes at the expense of the contemporary movie business (one exec proudly points to a poster for "Lethal Weapon Babies" and calls it "the first movie in the 'Lethal Weapon' series I could take my grandchildren to see"). And there are some recognizable Dante touches. He represents the Brothers Warner with a pair of identical roly-poly twins who are so old-school they still use corded phones. And when the plot takes Fraser and Elfman to Paris, we see a French poster for Jerry Lewis' "Which Way to the Front?"

Best of all is an inspired sequence where Elmer Fudd chases Bugs and Daffy through the Louvre and the trio pops in and out of paintings by Dalí, Munch and Seurat, morphing into surrealist and pointillist versions of themselves. (When Elmer blasts his shotgun in the midst of Seurat's "Sunday in the Park," tiny dots of color fly off the canvas.) It's a scene that gives you the best of Dante and the best of Looney Tunes: the feeling that the entire world has taken on the contours and logic of a cartoon. Kevin McCarthy, a Dante regular, shows up for a crack gag, and another Dante regular, grumbling little Dick Miller, brings his reliably gruff presence.

There's a reason, though, why Looney Tunes cartoons were six minutes long. Stretched out over an hour and a half, they're wearying. It may be that Dante doesn't take advantage of the full panoply of insanity available to him. But I'm betting that Warner Bros., wanting to take advantage of the holiday family movie market, tamped him down. That's ironic for a movie that spends so much time razzing its corporate sponsors. "Looney Tunes: Back in Action" opens with a wham-bam barrage of Daffy Duck being blasted and deformed by Elmer Fudd's shotgun again and again. We then get a studio exec talking about how you can't make these jokes anymore. Later, a cartoon villain hesitates to throw a stick of dynamite. "It will send the wrong message to children," he frets. These are Dante's slams at the persnickety parents and "experts" who claim that cartoons glorify violence (probably the same sorts of creeps who want to keep "Huckleberry Finn" out of schools).

But if you're making a movie about how Looney Tunes represented the id that has been snuffed out of American moviemaking by corporate blandness and political correctness, you can't hold back, and you probably can't do it in a movie costing millions of dollars and aimed at a family audience. When the plot moves to Africa, I was waiting for Dante to do something really politically incorrect, something that would parody the ludicrous movie traditions of what life was like in the jungle. He tosses off one great gag -- Tweety Pie seeing a flock of native Tweetys and, feeling his roots, donning kente cloth to proclaim "Cwy Fweedom!" -- but not the full-blown nuttiness you long for.

The humans in the movie are little more than guest stars. Timothy Dalton as an actor who's a real-life James Bond might have been a great way to parody the grim dullness he brought to his two turns as Bond, but nothing is done with the idea. Brendan Fraser, who combines sweetness with unpredictability in a way that's unique to him, showed more of a cartoon spirit in "Monkeybone," and it's just perverse that his big moment of physical derring-do occurs off-screen.

Steve Martin, as the head of the evil conglomerate Acme, who has a plan to turn humans into monkeys, looks great with a nerd's center-parted hairdo, big round glasses, and floodwater pants, but never gets to cut loose. It's fun at first to see Jenna Elfman as a studio ballbuster; everything that's unconvincing about her spacey sweetness melts away. But as the colleague seeing the movie with me remarked, she makes you long for what Téa Leoni could bring to the part, and as the movie goes on, Elfman's vacuous, overeager quality returns.

Why, oh why, didn't the moviemakers make Heather Locklear the love interest? She turns up as the star showgirl at Yosemite Sam's saloon, and later suits up in a leather Emma Peel outfit. She looks great, as always (and she's aging about as fast as Dick Clark -- which is to say, as fast as molasses runs in February). More important, Locklear has whip-fast comic timing and a knack for parody. Her appearance hosting "Saturday Night Live" a few years back was one knockout comic display after another. Locklear always seems ready to raise the kind of hell that makes a comedy take flight, and here's hoping some filmmaker will be smart enough to recognize it.

What's strangest about "Looney Tunes: Back in Action" is that the cartoon stars seem as secondary as the humans. Bugs and Daffy don't get much of a chance to cut loose either, and the background gags aren't delineated enough for us to enjoy them.

"Looney Tunes: Back in Action" is painless to sit through and kids will probably enjoy it, especially if they're not all that familiar with the original cartoons and characters. It's not a disgrace, but it is a missed opportunity. "It's a Good Life," Dante's contribution to the "Twilight Zone" movie, was a genuinely unnerving transformation of the physical world into something like a sinister, expressionist Looney Tune. (The image of the young girl whose 10-year-old brother has wished the mouth right off her face isn't one you're likely to forget either in your waking hours or in your dreams.) The memory of those 30 minutes makes the awkward melding of the animated and real here feel prosaic. It's hard not to be disappointed at a Joe Dante movie where the villain's scheme to turn humans into monkeys isn't realized. A world where people behave like monkeys -- where they give themselves over to the id that has always motivated Dante's pop epics -- might make for the ultimate Dante movie.