Ron Howard's latest Oscar bid is a gruesome and thoroughly unpleasant western that can't decide whether it's racist or overly p.c. Guess what? It's both. 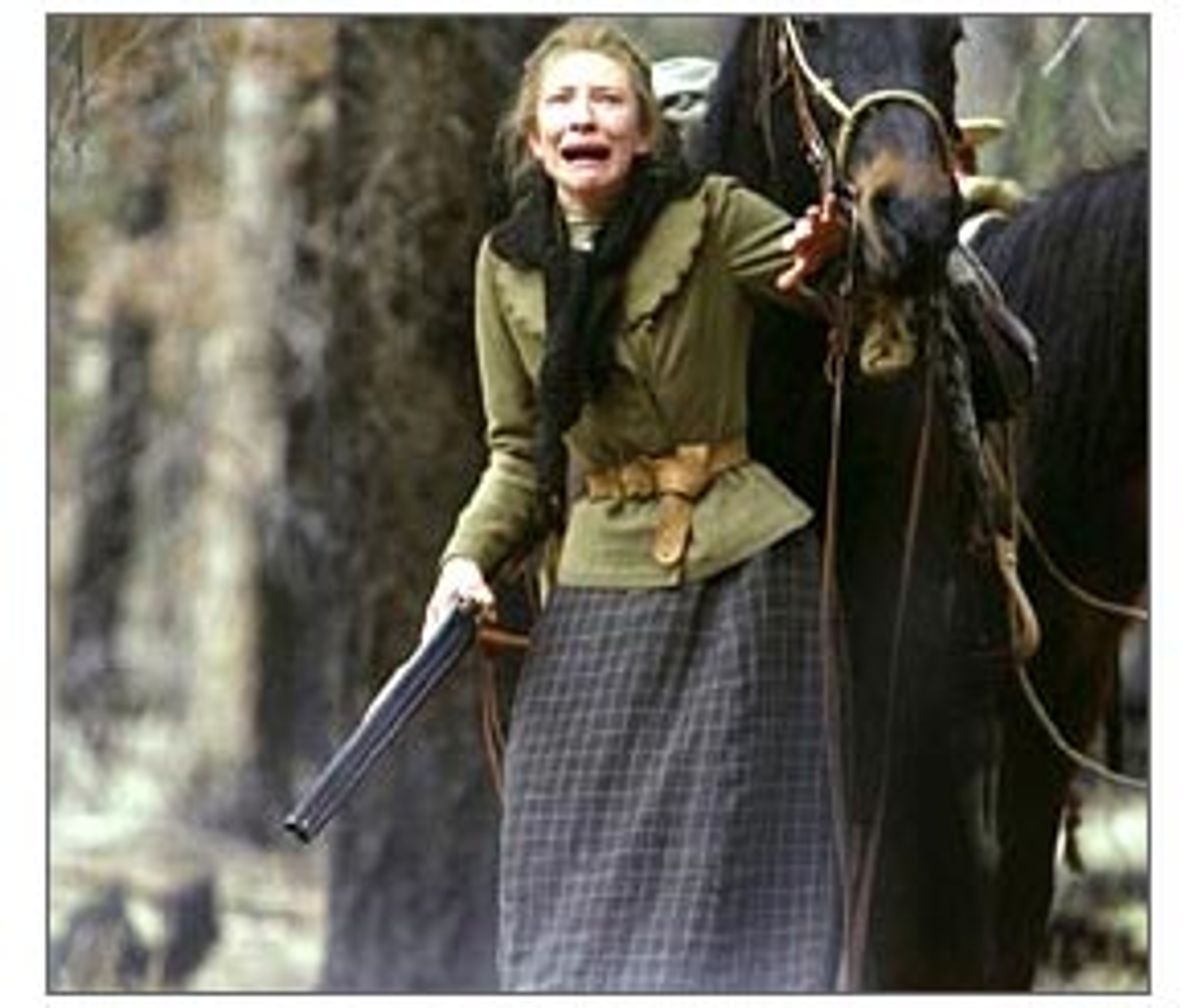 Here's what you'll see in "The Missing": a close-up of an old woman's mouth as a doctor pulls the last remaining tooth from her head; a body sewn up in what looks like an animal skin and left to roast over a campfire; a man's throat gouged by a chicken foot dipped in rattlesnake venom; a man bleeding from the eyes after some Indian hoodoo dust is blown into them; a mother blowing her brains out as she clutches the body of her dead child; a young woman forced to eat dirt by the Indian who's fixing to sell her into slavery; a flaming arrow shot into the flank of a horse that whinnies in agony; scenes of children being terrorized; and various beatings, shootings, hatchetings and knifings. Welcome to Columbia Pictures' Thanksgiving release.

After winning an Academy Award for "A Beautiful Mind," Ron Howard has approached the western in the spirit of pious exploitation. "The Missing" is affected with the solemnity that some directors feel is necessary for the genre, though it cancels out both the thrill of western adventure and the expansive pleasure of watching landscapes populated principally by men and horses. At two hours and 20 minutes -- just 10 minutes shy of official Oscar length -- the movie is an unpleasant slog, the gruesomeness working in concert with humorlessness to lend the whole picture a queasy deadliness.

The only thing the dour mood does for the movie is to keep audiences from seeing immediately what loony mixture it is. Ken Kaufman's script scrambles a female empowerment parable, a tale of family reconciliation, John Ford's "Searchers," mysticism, the hokiest Indian hoo-ha from old movies, and big dollops of contemporary movie brutalism. Howard knows he can no longer make a movie that portrays all Indians as bloodthirsty savages. So he and Kaufman include good Indians who, like the white characters, are victimized by the renegades. This sop to contemporary sensibilities makes the movie feel even more insulting. Do we have to keep pretending that there weren't some Indians afflicted with bloodlust (which, in a lot of cases, came from an understandable desire for vengeance)? And do we have to assume that audiences are so stupid that they will assume those characters stand for all Native Americans?

In 1974 Robert Aldrich made a western called "Ulzana's Raid" that's probably one of the most brutal pictures the genre has ever produced. In one scene, a regiment of cavalry comes across a group of settlers who have been slaughtered. The young officer in charge (played by Bruce Davison), sickened by what he sees, turns to Burt Lancaster as the tracker who has joined the party and demands, "You don't hate them for this, do you?" Lancaster calmly answers, "That would be like hating the desert because there's no water in it." You can argue with the implication that savagery is inherent in some people (though I don't think Aldrich intended us to think it was just "some people"), but Lancaster's evenness in this scene, and the movie's matter-of-fact acceptance of the violence directed against both settlers and Indians, feels honest without giving in to either prejudice or fantasies of virtue.

"The Missing" on the other hand, gives us a behemoth of a villain, a pockmarked Indian named Pesh-Chidin (Eric Schweig) who serves no purpose except to make the audience want to see him dead. And the script invests him with shamanic powers, so he's got bad magic as well as ugly brute strength. Pesh-Chidin is the leader of a group that kidnaps young women in New Mexico (Indian as well as white women -- another aspect of the movie's phony evenhandedness) and sells them as sex slaves over the border in Mexico. One of the women he kidnaps is the daughter of Maggie (Cate Blanchett), a frontier doctor used to living the life of an independent woman. She has two daughters -- Lily (Evan Rachel Wood) and young Dot (Jenna Boyd) -- and even a lover (Aaron Eckhart as a cowboy who occasionally parks his boots under her bed).

When Maggie realizes that the Army regiment tracking the kidnappers is headed the wrong way and that Lily will be in Mexico before they realize their mistake, she takes off after them. And the only person she can turn to for help is Jones (Tommy Lee Jones), the father from whom she's estranged. He left Maggie and her mother for an Indian woman and has spent his life wandering the territory. Maggie and her father are accompanied by little Dot, ostensibly because she refuses to be left alone, but obviously so Howard and Kaufman can find ways to milk suspense by putting a child in jeopardy whenever the movie needs a goose.

It's much too early in Blanchett's career for her to be playing a character who's such a major pain. If it were simply a case of a talented actress refusing to play to the audience by making a character more likable than she is, then Blanchett's performance here might seem fierce. But again and again, Maggie's decisions are clearly lacking in common sense, and because the filmmakers want to portray her as a strong woman, they never suggest the hysteria that might make her poor decisions understandable. Blanchett doesn't give a bad performance, but the sternness of the part doesn't do much for her -- it certainly doesn't suggest the wit she gives off when you catch her on a talk show.

Tommy Lee Jones, with long hair that seems to have been borrowed from David Carradine in "Kung Fu," at least knows how to toss off his lousy lines and get a few laughs out of that leathered deadpan mug of his. At times he speaks in an asthmatic drawl that sounds uncannily like Bill Clinton, and though he's playing the stalwart elder, his casualness lightens the movie's load.

And poor Aaron Eckhart. As he showed in "Erin Brockovich," Neil LaBute's underrated "Possession," and "The Core" from earlier this year (a smart, entertaining sci-fi adventure that humanized the Earth-goes-blam genre of "Deep Impact" and "Armageddon"), Eckhart has a talent for playing relaxed, casual romantic leads. He must be one of the only guys in the movies whose lantern jaws don't make them seem like G.I. Joe dolls. He's got good looks and charm, and still, all Howard and Kaufman can think to do is stick him in the sacrificial bad-guy role.

In the '60s and '70s, nearly every American western served as a Vietnam parable to show us how collectively rotten we were. It would be giving "The Missing" too much weight to claim it intends to show the threat that evil outsiders pose to the stability of the family. (The Indians in the '60s and '70s may have looked Vietnamese; thankfully, they don't look like Iraqis here.) What does put it in tune with the conservative times is its portrait of the government (as exemplified here by the Army) as too incompetent to serve the people, thus necessitating that Blanchett and Jones fend for themselves. That's the American can-do spirit as right-wingers imagine it.

But with a strong, stubborn female lead taking over the role John Wayne played in "The Searchers" (Blanchett's last line is a direct reprise of Wayne's famous last line in that movie) and rescuing young women destined for prostitution, the movie is cunningly devised to play to liberal audiences too, even as it brings its strays and runaways back into the family fold. "The Missing" is holiday entertainment for anyone who likes either a dollop of feminist uplift or family values (or both!) with their bloodletting.