"Survivor" predictably drops its best character. Plus: I've only seen him on a TV promo, but I think I've seen the next great child star. 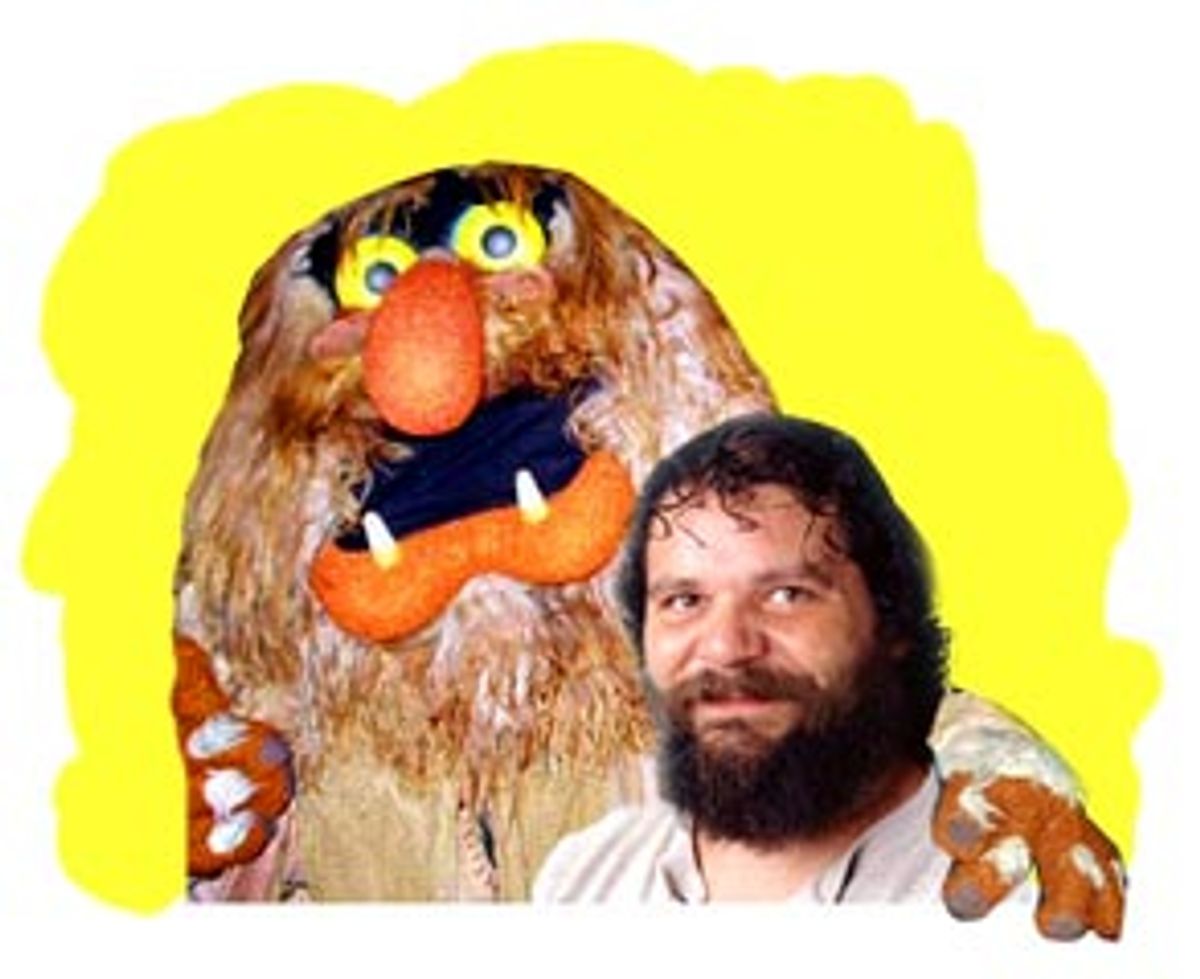 Sweetums, get that rat and smash!
It happens at around the same time every season. Just when you think "Survivor" is really starting to heat up, with a bunch of worthy contestants battling it out in earnest, everything changes. Inevitably, the most offensive of the bunch join forces with the weakest, and any remaining charismatic and/or able-bodied contestants are sent packing, post-haste. Thus was Sweetums double-crossed by Hippie Wrongstockings and his pathetic gaggle of losers.

In fact, Wrongstockings is such an unethical slimebag and has shown so few similarities to even the lowest, most unlikable young bandwagon variety of hippie, he really doesn't deserve the "hippie" part of his nickname at all. He's sneaky and smug and nasty, and it was a huge mistake for Sweetums and company not to get rid of him a long time ago when they had the chance.

To add insult to the usual midseason injury, Burton and Lill came back from the dead and now appear to be controlling the game. Is that really fair to Sweetums? Those two were voted off, fair and square, and now they're in the catbird seat, as Keith Jackson would say. I'm willing to concede that Burton is a tough competitor, even if he is pretty much a zero interpersonally. But Lill is the absolute worst. She's self-righteous, obsessive and weak, and she whines loudly about doing the right thing as if it'll make us forget that she's been consistently self-serving from the start. If she believed a word she preached about how unfair it was for her tribe to vote her off, given all the hard work she did, she would never in a million years have agreed to axe Sweetums. But this is exactly how the most irritating and mediocre players make it to the end of the game, year after year.

I still like Sandra a lot, and Tijuana really hasn't done anything to annoy me, but the overall picture looks bleak. Clearly, the remaining four young women (Sandra, Christa, Tijuana and Darrah) should join forces and boot Burton, Lill and Dippy. Otherwise, Burton will win every single challenge, and he'll drag Dippy to the very end, since Dippy has a better chance of spontaneously combusting than he has of winning the million-dollar prize.

But, all projections aside: Frankly, I'm depressed. I hate that a player as good as Sweetums is out of the game, particularly when his outlook upon departing was so grim. "This would have made my life a lot better," he said once he was voted off. "I always get hurt trusting people. I want so badly to be accepted, and I never get the acceptance that I want. I don't fit. So much for my dreams." Get off your pity potty, Sweetums! We accept you! Tough as it is to hear such painfully vulnerable words from Sweetums, it's important to remember that Sweetums is an emotional guy, and it's nice for Sweetums that Sweetums can report his emotions, no matter how embarrassing they might be or how inconsolable Sweetums might feel in that moment. After all, the rest of us don't admit to such shameful feelings. Instead, we go to the deli around the corner and buy a bag of imported Italian cookies, the really tasty crunchy almond-flavored kind, and eat them until they're all gone.

Or, if we're very rich, we purchase handbags. In fact, you can tell exactly how much baggage a wealthy woman has by counting the number of handbags in her closet.

If I were a rich girl, daidle deedle daidle
Digguh digguh deedle daidle dum. All day long I'd biddy biddy bum, getting my hair and my toenails done. Last week, the "Rich Girls" moved past their tedious, self-serious contemplation of Third World horrors, abandoning the white man's burden for Ferrari shopping in the Hamptons and whimsical toy purchases at FAO Schwarz.

Better yet, Ally and Jaime visited Daddy's design department to give his horrified designers brutally critical feedback on the Juniors line. Despite the empathy I felt for those poor souls watching their best work axed by the deus ex machina of Daddy's little girls, there were some serious vicarious thrills to be had. If you grew up in a medium-to-small town and spent a lifetime of shuffling impatiently through racks of wildly ugly clothing in crappy department stores as I did, then you'd probably get that same rush I did when I imagined marching straight into the bad-idea epicenter and declaring every cluttered pattern and scratchy material utterly awful.

Meanwhile, Tommy Hilfiger, adorable little sprite that he is, stood by and encouraged the girls to be as honest as humanly possible, making him the closest thing to "Fun Dad" from Matt Groening's "Life in Hell" as I've ever seen.

Later, after a few glasses of wine in the Hamptons, Ally's musings became alarmingly accurate out of the blue. "Maybe you never really do grow up," she said. "Maybe the world just forces you to, and every adult just puts on a façade of 'Oh, I'm responsible and organized,' but they're really just the same as they were in their 20s." Cue the smoke and booming voice! Don't let the girl in the Ugg boots get any closer to that curtain! This week's "Rich Girls" seemed to be some sort of odd tribute to "The Osbournes," featuring an endless succession of close-ups on a depressed, sick bulldog. For a while I thought that my TiVo must've messed up and recorded "Dogs Without Jobs" by accident.

Moons over my hammy
Recognizing that many of you are probably wishing that my TiVo would mess up and record something new for a change, let's check in with some of this season's new sitcoms, shall we?

Loyal readers will recall that I loved "Married to the Kellys," was moderately enthusiastic about "Arrested Development," and completely ignored "All of Us." Sadly, "Married to the Kellys" has leveled off at a mildly amusing cruising altitude, which in the world of sitcoms means it'll be on the chopping block soon. I still think it's much better than "Good Morning, Miami," just for example, but the lead characters haven't become less flat and bland since the pilot. Not exactly the stuff of TV Land classics, that's for sure. "Arrested Development," which I thought was too zany and arbitrary to ever evolve into an organic, character-based comedy, has, indeed, neglected to evolve into an organic, character-based comedy. Instead, it's just zany and arbitrary. But bust my buttons, it's pretty damn funny, too.

"All of Us," which didn't sound all that promising in September, is a solid, well-cast show with a surprising number of laughs per episode. Plus, it stars Lisa Raye, who rabid reality fans will recognize from "The It Factor," a show that follows actors around and documents just how torturous their lives are in order to deter other young people from pursuing the same fruitless path. But the best thing of all about "All of Us" is that promos for the upcoming "Tracy Morgan Show" run at least once per commercial break.

Look. I've got TiVo. I don't even watch commercials. But at some point I checked out one of these promos and now I'm addicted and can't wait for this ridiculous show to hit the air. Tracy Morgan plays a family man, blah blah blah, who cares? But he's got this incredible kid playing his son. Usually I can't stand smart-ass child actors, but honestly, this kid defies description. Remember how Gary Coleman had exactly one expression, the pouty lips thing he did when he said, "Whatchoo talkin' 'bout, Willis?" Well, this kid on "The Tracy Morgan Show" is like a cross between Webster and Jim Carrey. He's the hammiest little freak I've ever seen, and I can't wait to check out his stupid show.

The weeping Adonis
OK, that's enough of that. Back to reality. (Look, I just kicked "Starting Over," you can't expect me to give up the rest of this trash just yet.) This week, the regular guys on "Average Joe" found themselves competing for the girl against a gaggle of new contestants, who happen to be male models. The absurdity of the situation is not lost on finalist Adam. "Here's my chance to date a girl who I'd very much like to date, and the one thing we're doing before the elimination ceremony is having a pool party with underwear models. Literally, some of them are underwear models," he tells the camera incredulously. "I'm picturing my mom at home watching this, and I could see her starting to root against me and starting to root more for Alex, like, 'Adam, get out of the way, I can't see Alex without his shirt off!'"

Say what you will about boring dating shows -- an underdog this likable will not be denied. Of course, it helps that the competition is so weak. Zach continues to pretend that he's not a total dick, John is more painfully insecure and awful by the minute, and two of the three Fabios appear to have the personalities of yams. One Fabio makes the mistake of telling the object of all their affections, Melana, a friendly little first-date story about how he waited outside his ex-girlfriend's apartment for six hours when he thought that she might be cheating on him. Then, he digs an even deeper hole trying to explain the circumstances: this girl, she was on Prozac, see, and had a problem with drugs! Gotcha. Next!

Still, Adam is surrounded by meat Chiclets, and that makes him a little uneasy. After the pool party, he confesses to Melana, "I got really scared when we were driving to play polo. I saw this new real estate development, and it said, '12 New Models Available Soon.' I was like, 'Oh no! They're gonna make this harder!' I didn't know what was next!" This guy is so good, I can almost smell a second Bachelor Bob phenomenon on the way.

Until Adam has his own show, though, we'll have to console ourselves by watching "Trista and Ryan's Wedding." That's right, Bachelorette Trista and her main man are going to plan a wedding, then get hitched in a three-part series sure to offer more tantalizingly inane thrills and spills than a junior high school Swing Dancing mixer. At this rate, within a few years, there'll be nothing but dating show spinoffs on every channel. Is this a great time we live in or what?