The gathering storm around Richard Perle

D.C.'s "Prince of Darkness" has prospered in the shadows between the Beltway and big business -- but the latest scandal threatens to bring him down. 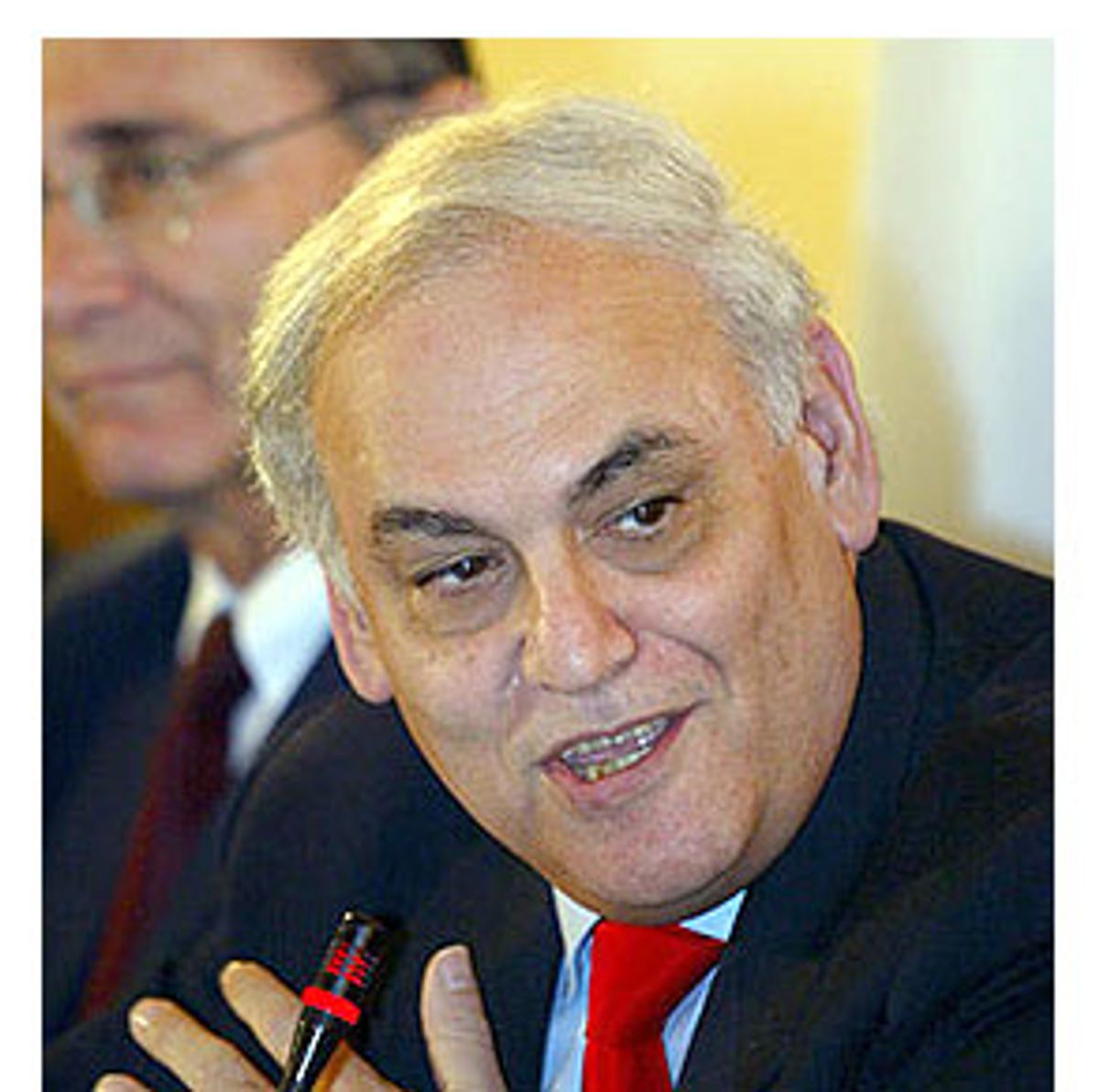 An influential über-hawk who enjoys close ties to the top of the Pentagon's civilian leadership, Perle got his wish earlier this year when the United States launched the preemptive war against Saddam Hussein that he'd spent a decade lobbying for. (The "Prince of Darkness" nickname stems from Perle's apparent dislike of nuclear arms treaties and Middle East peace accords.) A private businessman who once worked for an Israeli arms manufacturer, Perle maintains a public platform through the Defense Policy Board, a civilian advisory group stacked with hawks -- including James Woolsey, Newt Gingrich and Henry Kissinger -- who supported a war with Iraq.

Though he was forced to give up the board's chairmanship when some of his private defense-contracting clients were revealed, Perle maintains a unique position as a shadowy Beltway operator who blurs the line between private business and foreign policy. He's been making lots of noise -- and news -- lately, and his critics are asking questions about his intentions.

It's too early to tell how the accumulating controversies will affect Perle's role as a pro-war spokesman. In the past though, despite a history of missteps, Perle has managed to prosper. Or more important, to maintain the loyalty of senior administration officials ("the string of Perles"), many of whom he's cultivated for years and who find his pro-war bravado helpful.

Still, virtually none of Perle's predictions about the surprisingly messy war with Iraq have proven true. ("Support for Saddam, including within his military organization, will collapse at the first whiff of gunpowder," he told PBS in 2002.) Moreover, Perle recently found himself involved in a controversial story about how, on the eve of war, the Bush administration rebuffed a last-minute back-channel offer from Saddam Hussein that could have averted an invasion. And last week he raised hackles when he ventured away from the White House talking points and conceded that the war itself, however justified, was illegal under international law.

But more ominous for Perle than questions about his foreign policy meddling are those regarding his business dealings, as he suddenly finds himself at the center of a boardroom scandal that's likely to claim Lord Conrad Black's $1 billion media empire. Up until last week, Black served as CEO of Hollinger International, whose key assets include the Chicago Sun-Times, the London Daily Telegraph and the Jerusalem Post.

The company's implosion was sparked when an audit by outsiders, lead by former Securities and Exchange Commission chairman Richard Breeden, discovered $32 million in questionable payments to key company executives, including $7.2 million directly to Black and $16.55 million to Hollinger's Canadian parent company. The generous payments were made while Hollinger's handpicked board of directors apparently looked the other way as the CEO allegedly used the public company as his private piggy bank.

Perle serves on Hollinger's board with Henry Kissinger and Black's wife, conservative columnist Barbara Amiel, among others.

Drawing shareholder scrutiny, as well, are investments Hollinger made in companies run by its board members. Hollinger Digital, headed by Perle, invested $2.5 million in Trireme Partners, the venture capital firm that invests in technology, goods and services related to homeland security and defense. Trireme Partners is co-managed by Perle.

According to the Financial Times: "Also under review is a $14 million investment the company made under Mr. Perle's direction through Hillman Capital, a venture capital group controlled by Gerald Hillman -- who has since become a partner at Trireme and, like Mr. Perle, is a member of the U.S. Defense Policy Board."

"It's typical of the problems many boards of directors face, but this seemed to be a case of board problems on steroids," says Nell Minow, editor of Capitol Library, which covers corporate governance. "The CEO had voting control, so there was not even pretense that shareholders had a role. He gets access to capital you only get through going public, yet he gets to control it as if it were a private company. For investors, it's the worst of both worlds."

Last Monday, Black, a member of Britain's House of Lords, resigned as CEO from Hollinger. By week's end the Security and Exchange Commission began issuing subpoenas for its investigation into Hollinger's board. It appears Black's company, which he built over 33 years, will now be sold off, piece by piece; the investment bank Lazard has been hired to search for interested buyers.

The usually ubiquitous Perle, who has been a pro-war staple on TV talk shows and Op-Ed pages this year, has been uncharacteristically quiet since the Hollinger story broke. He was traveling out of the country and could not be reached for comment.

"The situation for the [Hollinger] directors involved is quite serious," warns Herbert Denton, a shareholder advocate who has represented other investors in Hollinger. "I am certain additional legal action will be taken. And the focus will be the board of directors. It's got to go there."

That means Perle and others will soon be facing some "ugly depositions and headaches," says Minow. "The directors should start putting their assets in their wife's name," she quips.

The idea that as a board member Perle could face punitive damages for allegedly not fulfilling his duty to shareholders is not entirely out of the question. This May, a Delaware judge stunned the corporate world when he ruled that the Disney board members who OK'd an extravagant $140 million severance package for exiting executive Michael Ovitz (who worked at Disney for 15 months), might be forced to pay the money back themselves since they so dramatically failed in their duties.

Judge William Chandler wrote that the plaintiff's complaint "suggests that the Disney directors failed to exercise any business judgment and failed to make any good-faith attempt to fulfill their fiduciary duties to Disney and its stockholders."

The ruling breaks with decades of corporate-friendly Delaware decisions, which maintained a hands-off approach toward board members, absent any criminal activity. The Disney shareholder trial is scheduled for early 2004.

The Hollinger revelations follow the accusations of last spring that Perle was representing companies that had business pending before the Department of Defense, while at the same time he was advising the DOD in a semi-official capacity. In March, Perle was forced to give up his unpaid position as chairman of the Defense Policy Board after conflict-of-interest allegations were made in the press, most notably the New Yorker and the New York Times. (At Defense Secretary Donald Rumsfeld's request, Perle remained on the board itself, but not as chairman.)

This month the Department of Defense's inspector general pronounced Perle innocent of any ethics violations, although the ruling was based mostly on a technicality. The inquiry determined that through his role with the Defense Policy Board, Perle works for the Pentagon only eight days a year, so he is therefore not subject to its stringent conflict-of-interest regulations.

But neither Perle, nor the Wall Street Journal's editorial page, which called for apologies from reporters who publicly questioned Perle's integrity, had much time to savor the vindication; soon the Hollinger scandal became Page One news on two continents.

Beyond the damage the scandal may cause to Perle, the pending collapse of Hollinger carries with it additional political ramifications. Because while Black's media empire has been shrinking in recent years -- in 2000 he unloaded most of his Canadian newspapers for $1.8 billion -- it has remained a consistent outlet for conservative voices.

It's too early to say who might buy up Hollinger's highest-profile properties, but it's questionable whether the new owners would maintain the dailies' conservative slant. Of particular interest to hard-liners is Hollinger's Jerusalem Post. As the Jewish Forward newspaper in New York City noted last week, "The Post was historically known as a left-wing newspaper, until its acquisition by Hollinger in 1989. Since then it has become a leading conservative outlet for opponents of the peace process throughout the world."

The sale of the Jerusalem Post would also rob Perle of one of his most reliable media outlets, where -- being tossed softball questions -- he's often interviewed at length about current events. ("How does Bush compare with your idol Ronald Reagan in defending the free world?") The paper though, rarely informs readers that Perle sits on the board of directors of the company that publishes the Post. In fact, just last week, the Post conducted a lengthy sit-down with Perle, but failed to ask him about the key role he may have played in the burgeoning Hollinger scandal. In fact, the issue was never addressed.

Perle's Hollinger woes come on the heels of other public missteps. For instance, last summer he embarrassed the Pentagon when he invited Laurent Murawiec, a former follower of political extremist Lyndon LaRouche, to brief the Defense Policy Board about Saudi Arabia. The emphasis of Murawiec's presentation was that Saudi Arabia should be counted among "our enemies," and that, if necessary, the United States should threaten Islam's two holiest cities, Mecca and Medina, located inside Saudi Arabia. Following press inquiries, Perle claimed ignorance, insisting he didn't know what Murawiec was going to say.

Earlier this year when the New Yorker's Sy Hersh detailed Perle's possible conflicts of interest, Perle went on CNN and labeled the Pulitzer Prize-winning journalist a "terrorist" and threatened to sue for libel. (Perle has yet to take any legal action.)

This summer the Nation magazine reported Perle often charged foreign TV news organizations up to $900 for on-camera interviews with him.

On Nov. 6, the New York Times reported Perle had met for two hours at a London hotel with a mysterious Lebanese businessman who, allegedly on behalf of the Baathist regime, was offering to hold monitored elections and allow U.S. troops to search for WMDs, in exchange for leaving Saddam in power. In the end, the offer was essentially dismissed by the CIA and the Pentagon. Perle told the Guardian newspaper that he had been told by the CIA not to pursue the contacts.

Cannistraro, who also received back-channel feelers from Iraqis on the eve of war, which he relayed to the State Department, says Perle was "disingenuous" about the meetings, since administration hawks, their minds set on war, were not eager to consider last-minute peace initiatives. "He didn't do it with an open heart," says Cannistraro.

Most recently, while Bush was visiting Britain last week, Perle conceded to a London lecture crowd that the war with Iraq, based on international law, was likely illegal. "I think in this case international law stood in the way of doing the right thing," he said.

Just prior to the war, British Attorney General Lord Goldsmith gave prime minister Tony Blair crucial political cover when he ruled the war, even without a second United Nations resolution authorizing the use of force, would be legal.

"It's hard to figure out what [Perle] was trying to do as a tactical matter," says Michael Dorf, a law professor at Columbia University and a columnist for FindLaw.com. He notes Perle's argument would have made more sense if caches of weapons of mass destruction had been seized in Iraq. "That way, he could say, 'Technically the war was illegal but aren't you glad we did it?'" But without the WMDs, the argument falls flat.

Now, instead of worrying about missing WMDs, Perle has to contend with angry Hollinger shareholders, at a time when the courts and the SEC are taking a new hard-line approach with boards accused of negligence. Says Minow: "This is just a plain case of fingers getting caught in the cookie jar."