Get off your knees, Monica

I've always rooted for the former intern because she paid a hefty price for the same kind of dumb mistake all my friends and I have made. But she needs to stop with the GQ spreads and get a life. 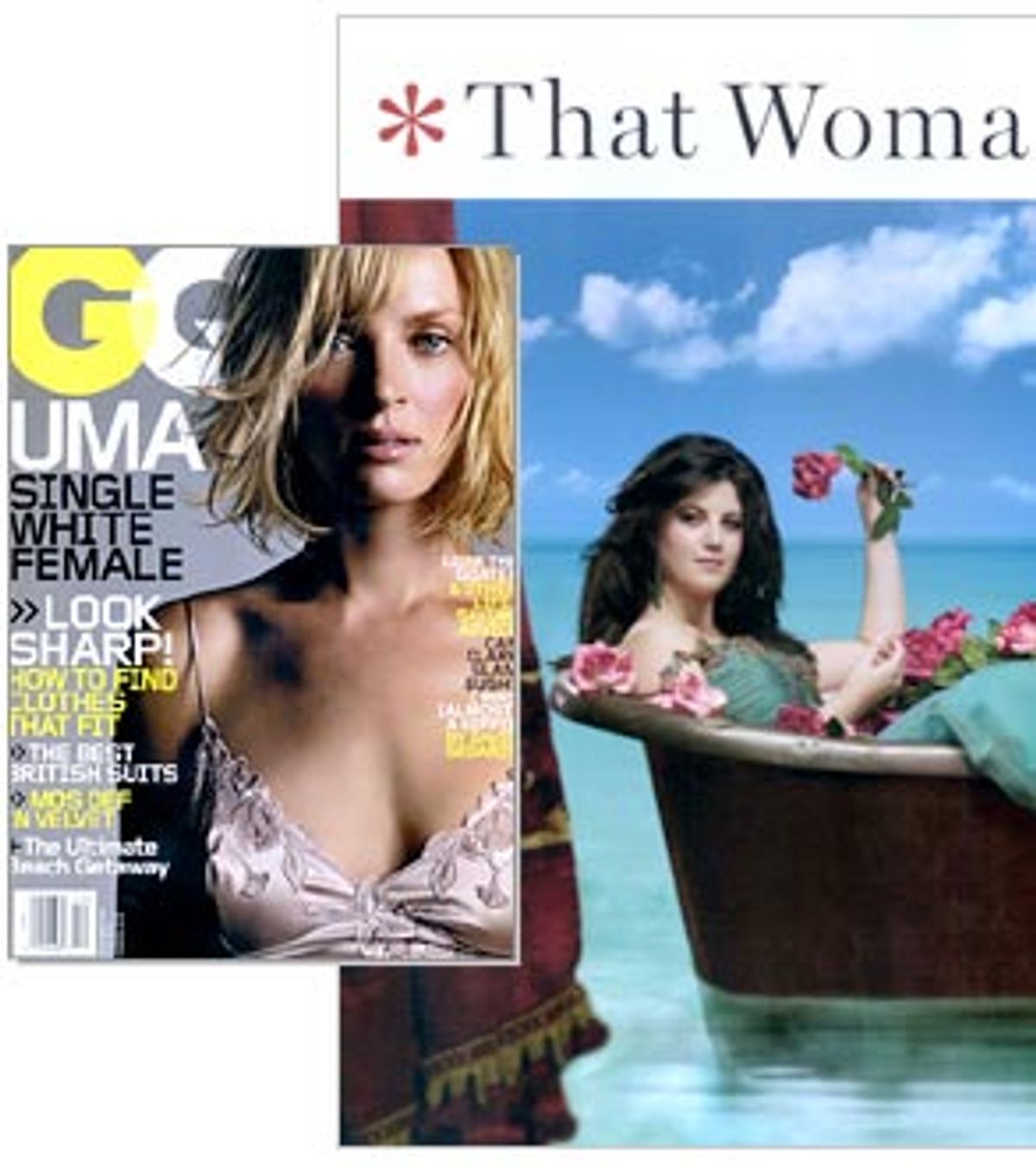 She's back. Former White House intern Monica Lewinsky, that is, as the subject of a profile in December's GQ on the occasion of her 30th birthday.

"My twenties were a little colorful," Lewinsky told writer Lucy Kaylin. "I hope my thirties are less eventful. I hope I'm a little less on the radar screen."

And really, what better way to kick off the homey, private years than with a six-page lay-out in Condé Nast's premier publication for men?

The spread includes a new photograph of Lewinsky, clad in a blue-green ball gown, sprawled in a bathtub, looking like some sort of soft-fleshed doxy. There's also a reproduction of her 30th birthday party invite that includes baby pictures: In one she sports a "Kosher Dills Half Sour" T-shirt; in another she seems to be sucking face with an Ernie doll from "Sesame Street."

Monica: It's time to move on.

I have not always disapproved of Monica Lewinsky, our national succubus, siren and slut. In many ways, the line that separates us is quite thin. We're both big-haired brunettes of about the same age. Neither of us will ever be called waifish, though we might be called Jewish. For five years we've walked the same New York sidewalks, eaten at the same restaurants, attended some of the same parties. We've even shared acquaintances, and have spoken socially on a few occasions.

In fact, the only real difference between my personal gestalt and Monica Lewinsky's is that mine was not formed while fellating a sitting president of the United States.

Or rather, that hers was.

But in the big picture, this is a pretty minor distinction.

I may be a comparative prude when it comes to married men, but I am capable of romantic doltishness and ill-conceived sinning all my own. And so are all of my friends. Whether single, married, engaged, gay or straight, all of us have been there and regretted it.

And so until now, I have rooted for Monica because she is just a girl -- like me, like Gwen Stefani, like the rest of us, who happened to use extraordinarily bad judgment and then paid a hefty price. The years following Monica's moist, fumbling gaffe were years that should have felt for her almost exactly like the rest of our aimless post-college years.

She should have gotten her job at Revlon. Or become a consultant or stockbroker or designer or journalist. Or whatever. She should have moved to New York and lived in a crappy apartment with roommates. She should have had some less than spectacular relationships and gone through a weird Marc Jacobs phase as soon as she started making money. She should have once seen Gwyneth Paltrow in a yoga class and told her friends all about it.

But because she was famous for being a tart (who was really not much tartier than the rest of us) she couldn't score a job, despite her Pentagon-larded résumé. She doubted the motives of every guy she ever dated. Marc Jacobs probably gave her clothes for free, but not because she has the desiccated figure that designers like to hang their clothes on. And if she and Gwyneth ever rubbed yoga mats, it was surely the actress who went home and told her friends about it.

I'd always found what happened to Monica Lewinsky very sad on a personal level. It was as if she became a burlesque embodiment of all of the nightmare fears of my own phylum: the young urban woman.

What if all our potential bosses never saw past our sexuality or took us seriously? What if our professional aims -- even when backed up by experience and ambition -- were ridiculed? What if we were made to pay for youthful indiscretions with early-onset spinsterhood? What if unseen forces monitored everything we put in our mouths and then called us fat? What if men liked us just because we gave head? What if someone snapped our picture as we stumbled, hung over, to get tampons on Sunday morning? What if by exhibiting sexual confidence in our 20s we had inadvertently barred ourselves from a future that included fulfilling work and love and kids if we wanted them?

Monica saw all those night terrors come to life, while her former paramour scooted out of office with the slippery pizazz of Flipper, and now lives as a senator's husband and Gadabout-in-Chief in her own city.

"I was here first," she tells Kaylin, to whom she also confides that she has trouble meeting men, that she was hurt by the fact that people doubt her intelligence, and that she did not "make a fortune from this."

And for the first time, I say: Cry me a freakin' river.

She got here first, but what did she do to make the city hers? To prove that she had a brain to go with the thong? What steps has Monica Lewinsky taken to put some distance between herself and the scene of her crime?

She took $600,000 for participating in her own biography (penned by the author of "Inside Kensington Palace"!). She subjected her healthy body to further scrutiny by briefly becoming a Jenny Craig spokesperson. She launched a not-very-successful handbag design business. And she proved her intellectual mettle by taking a five-week reality-show gig on Fox -- a veritable breeding ground for nuclear physicists.

But mostly, what Monica has done with her time as a grown-up is betray all of us who were empathizing with her, who were feeling some small percentage of her pain, who were just waiting for her to prove to the world that she was more than a set of wet lips and a beret. And she did this by adamantly refusing to do anything but dwell on that one time that she went down on the president.

She appeared on Barbara Walters' show to talk about it. She appeared in an HBO special and cried about it. She has rehashed it in interviews with Vanity Fair, New York Magazine, Marie Claire, Elle, and now GQ. Then there was her 1999 appearance on "Saturday Night Live"; she performed a sketch with Darrell Hammond that imagined her as the future Mrs. Clinton, and then appeared on "The Ladies' Man" with Tim Meadows, during which she advised a fictional caller, "It's not a good idea to get involved with someone you work with, believe me!"

I remember a college class in which my professor asked us to conceive of the difference between mourning and melancholia as a sort of metaphorical skin condition. In mourning, anguish is absorbed and digested by our hearts and brains until it can be gently expelled through our skin, naturally. Melancholia is different. It is when grief gets stuck, embedded in our epidermis as if we were hard-shelled cockroaches, visibly marked by whatever pain and hardships have been thrown our way.

Monica Lewinsky is one melancholic cockroach.

And I don't want to hear about it anymore.

But she insists on slipping into that blue dress again and again -- this time while lolling in a tub. The GQ story describes the way she turned down a proffered cigar at a party: "Whoa, you've got to be kidding!" she said. Is she developmentally disabled when it comes to learning from experience? Why else would a woman who talks loudly about being treated as dumb by the press choose to talk about eating a "snacky" or having to "tinkle" on the record?

I can't promise that if she pulled it together and stopped telling every journalist she meets about her neighborhood coffee shop where all the regulars are protective of her that she'd find prompt personal fulfillment. But I'd guarantee a decrease in the number of paparazzi who show up each day to get a shot of her gnawing on a buttered scone.

I wish she'd try, even if it's embarrassing, to just light up the cigar with the rest of the kids at the party. I wish she would prevent photographs of herself as a child wearing a "Kosher Dills" T-shirt from getting published in national magazines. And I wish that she wouldn't undress in front of a GQ reporter and then ask her not to write about her cellulite.

If she wants to think nostalgic or silly or self-deprecating thoughts about her own unfortunate history, she should go ahead. That's what our interior lives are for. But she should consider the difference between inside thoughts and outside thoughts; it's one of the saddest lessons that classic over-sharers (myself included) have to learn eventually.

It's time to get a real job now, Monica. Or take some classes.

I think of the way that my anxious, sometimes lonely cadre of friends try to push ourselves to move forward and grow up. We try to work harder, think more rigorously, dream bigger, do better next time. Sometimes we get therapy; sometimes we get haircuts.

Neither seems to have taken with Monica.

But I have no more sympathy, and no more interest in how hard it is to pull off a second, or third, or 50th act.

For the first time ever, I think her quandary is no one's fault but her own.