Director Robert Greenwald's "Uncovered" reveals the deceptions and distortions used to sell the invasion. And from the limousine liberals at Moby's bash in NYC to the regular folks in Billings, Mont., antiwar and anti-Bush audiences are eating it up. 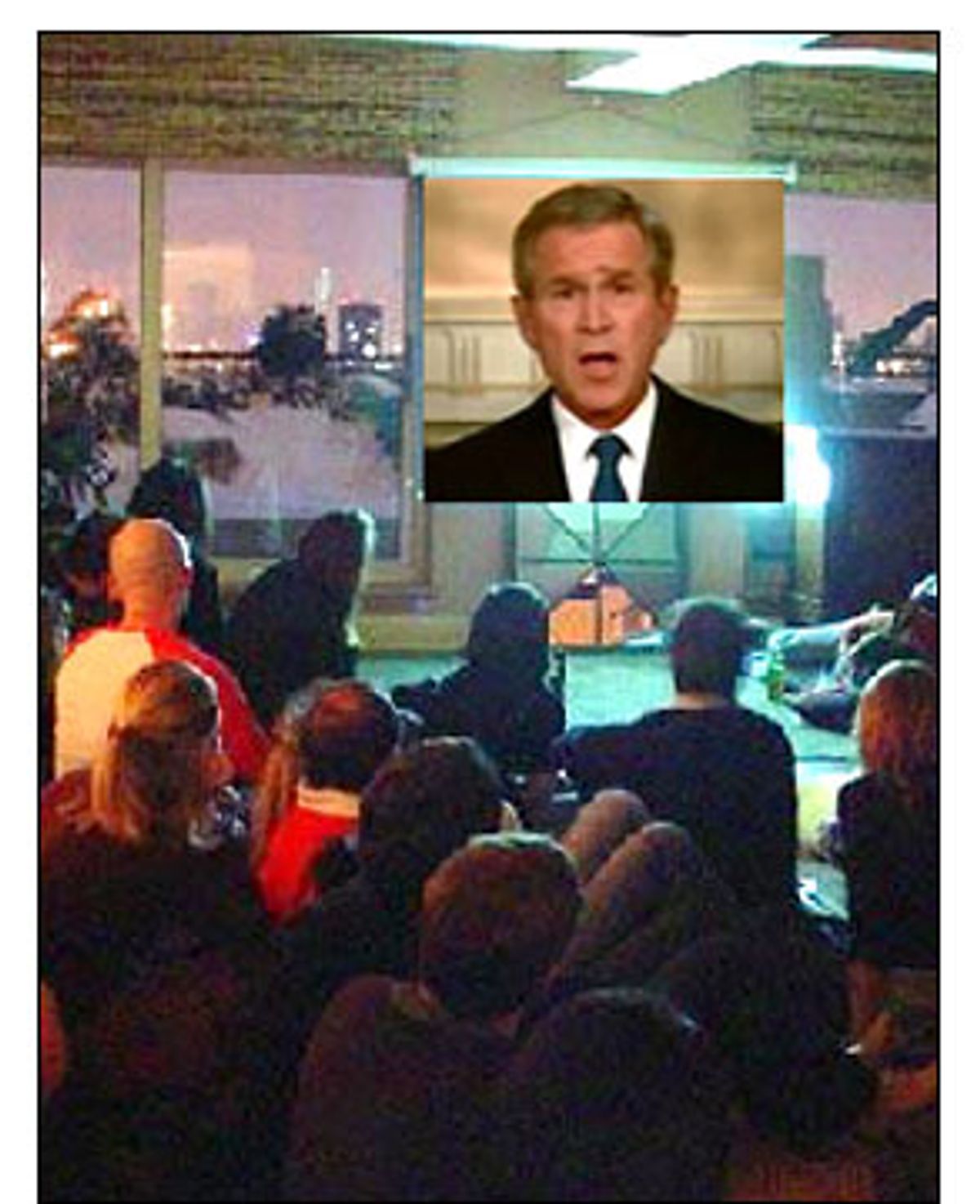 Early one morning in June, film director Robert Greenwald settled into the study of his Los Angeles home with the day's newspaper. Midway through an article was a seemingly innocuous quote from a Bush administration official assuring the country that weapons of mass destruction programs would be found in Iraq.

Greenwald says he got a knot in his stomach. The administration wasn't talking about finding actual weapons anymore. Now the rhetoric was about weapons programs, which might mean little more than sheets of paper. "I had no faith or confidence that the media would catch them on their moving of their goal," he says. "Suddenly, I could see the headline in a month where they're going to announce victory because they found programs. I flashed back on all those news conferences where they said Iraq is a danger and invoked Armageddon.

"I felt I could do a service by nailing them on this complete change in why they went to war," Greenwald says. "Two or three days later I read about this group of former CIA experts from different branches who were coming out against [the administration]. I thought, 'Wow, this is interesting.' So I put the two instincts together." Thus the documentary "Uncovered: The Whole Truth About the Iraq War" was born. Within a few months, it was completed.

Since then, "Uncovered" has emerged as a kind of liberal master narrative about the run-up to Operation Iraqi Freedom. It's for sale on several major progressive Web sites, including those of the Nation, Buzzflash, John Podesta's Center for American Progress, and MoveOn.org (both MoveOn and the Center for American Progress helped fund the film). So far, it's sold more than 40,000 copies. Financier and Bush foe George Soros held a screening of it in New York. Podesta, Bill Clinton's chief of staff, showed it to an audience of 100 at the International Spy Museum in Washington, and his center sent a copy to every member of Congress. When Greenwald screened it at a 500-seat theater in L.A., people jammed the aisles, stood in the back, and cheered when it was over.

And on Sunday, people gathered in more than 2,600 American homes, cafes and community spaces to watch "Uncovered" at parties organized through the progressive group MoveOn.org. As Greenwald points out, 2,600 screens is a huge release for an hour-long documentary. Hollywood blockbusters, he says, typically open on about 4,000. The showings were held across the country, from a living room in Clearfield, Utah, to a luxury apartment in a Donald Trump building on Central Park South, where pop star Moby and money manager Boykin Curry hosted about 40 people. At 8:30 p.m. EST, parties nationwide called in to a massive conference where Eli Pariser, speaking from Moby's party, interviewed Greenwald, who'd dialed in from Los Angeles. The questions were submitted by MoveOn members.

There's nothing new in "Uncovered," but there's power in the accumulation of expertise that Greenwald presents, which is one reason Bush's opponents are embracing it. It consists largely of interviews with former American intelligence agents, military officers and diplomats who eviscerate much of the White House's case for war. Among them are Joseph Wilson, the retired diplomat who investigated claims that Iraq was shopping for uranium in Niger and found them baseless; Patrick Lang, former chief Middle East analyst for the Pentagon's Defense Intelligence Agency; Chas Freeman, former ambassador to Saudi Arabia; CIA veteran Robert Baer; and more than a dozen others. The film opens by introducing each of them and telling how long each served the United States. The weight of all their experience gives their criticisms of the Bush administration a heft missing from news reports that just quote one or two disgruntled veterans.

The movie does more than just present the case against the hawks, though. Greenwald wants to make sure that the administration's prewar claims don't disappear down the memory hole now that most of them have proven false. To this end, he compiles footage of Bush and Condoleezza Rice warning of mushroom clouds and of Paul Wolfowitz telling Congress that Iraq can pay for its own reconstruction. Lately, conservative pundits like Andrew Sullivan have claimed that the administration never suggested that Iraq was an imminent threat. Greenwald offers an implicit rejoinder with a montage that begins with Bush saying, "Delay, indecision and inaction could lead to a massive and sudden horror." It then cuts to Rice, who says, "It simply makes no sense to wait any longer." Then Rumsfeld: "Take action, before it's too late." And Bush: "We will not wait." The sequence ends with Vice President Dick Cheney saying, "As President Bush has said, time is not on our side."

"I believe it's irrefutable that we were lied to and information was distorted in the effort to get us to go to war," says Greenwald. "I hope the film is an element in communicating that. I hope it will reach people who already feel that, people who are uncertain, and people who disagree and will be able to look at the film and make an educated response to what I think will go down as one of the great tragedies in the history of this country."

Because Sunday's screenings were hosted by MoveOn members, it's likely that many viewers already agreed with Greenwald. Yet even at Moby's Manhattan party, views were far from uniform about the justice and justifications of the war.

Boykin Curry, a 37-year-old friend of Moby's who lent his sprawling apartment for the event, is strongly pro-war. "I support the war for ultimately liberal reasons," he said. "To free 30 million Iraqis from brutal repression and foster the only liberal democracy in the Middle East." If that sounds like Paul Wolfowitz's position, Curry doesn't mind -- in fact, he says he "loves" the deputy secretary of defense.

Nor were some of his guests particularly political. The apartment, decorated in earth tones and Asian details, was full of lovely women with highlighted hair wearing pointy-toed boots and $150 jeans. Guests were served pizza, warm fruit pie à la mode and Veuve Clicquot champagne. Some attendees had never even heard of MoveOn, but showed up because Curry had invited them. Curry himself is dismissive of MoveOn's politics, and of Howard Dean, the favorite candidate of MoveOn members. A Lieberman supporter, he said if Dean gets the nomination, he'll vote for Bush.

Yet Curry considers himself a staunch Democrat, and he's furious about the way the Bush administration deceptively sold the war and then bungled the occupation. "Like Joe Lieberman said, George Bush has given a noble war a bad name," he said. In fact, Curry blames Bush for ruining the righteous project that Wolfowitz worked for.

"This isn't about being for the war or against the war," said Moby. "It's about a president who lies."

Moby got involved with MoveOn a month and a half ago, when he agreed to judge the group's "Bush in 30 Seconds" contest, a competition to create the best anti-Bush advertisement. He first saw "Uncovered" in the basement of the Tribeca Grand Hotel on Nov. 6, at a screening that included Janeane Garofalo, Nation editor Katrina vanden Heuvel and Joseph Wilson. Moby called the film "powerful" and said that before seeing it, "I didn't realize the extent of the deceit. Everyone in the administration knew beyond a shadow of a doubt that there were no weapons of mass destruction."

It's not hard to see how "Uncovered" would leave viewers with that impression. Again and again, Greenwald juxtaposes scare-mongering quotes from the administration with expert debunking. First, he shows Bush saying, "Saddam Hussein had the materials to produce as much as 500 tons of sarin, mustard and VX nerve agent." That's followed by Peter Zimmerman, former chief scientist for the Senate Foreign Relations Committee, saying: "Any sarin that they were making in 1990, 1991, had a known shelf life of about two months. Well, if you made it 12 years ago and it had a shelf life of two months, it may not be safe to drink, but it isn't sarin nerve gas any longer. And there's no way the agency could not have known that."

After a clip of Secretary of State Colin Powell's presentation at the United Nations on Feb. 5, Ray McGovern, a 27-year veteran of the CIA who founded Veteran Intelligence Professionals for Sanity to protest the administration's distortions, says, "I would have to comment here on Secretary of State Colin Powell's debut as an imagery analyst. It was highly embarrassing for those of us who know something about the business. We couldn't tell whether this was an honest mistake by those who now do the imagery analysis ... or whether perhaps Colin Powell was being set up."

Much of what these administration critics say has since proved correct. What's missing from Greenwald's film, though, is an acknowledgment that people in the Bush administration were not the only ones who believed that Iraq had some kind of prohibited weapons. The sarin Saddam had in 1991 might have broken down, but that doesn't settle the larger question of whether Saddam continued to produce biological or chemical weapons after the U.N. weapons inspectors left in 1998. Greenwald doesn't interview anyone like Kenneth Pollack, former director for Gulf affairs at the National Security Council, a liberal Iraq hawk who at least could have explained why some well-meaning, seemingly well-informed people believed that Iraq was a threat, if not an imminent one. The only journalist in the film is the Nation's David Corn, who makes important points but who might usefully have been balanced by pro-war writers like the New York Times' Thomas Friedman or the New Republic's Peter Beinart.

"Uncovered's" weakness isn't that it has a point of view, but that it hardly bothers to take on opposing ones. Frontline's October documentary, "Truth, War and Consequences," is just as damning as Greenwald's -- and covers much of the same ground -- but it's even more persuasive, because it allows players like Iraqi exile Ahmad Chalabi and Pentagon advisor Richard Perle to make their cases, and arguably to hang themselves. It also suggests the extent to which the administration may have deceived itself even as it was deceiving the nation, a hypothesis missing from the fairly black-and-white world of "Uncovered," in which the administration's possible motives remain opaque.

Still, even if "Uncovered" lacks nuance, it's largely accurate and politically effective. Even Curry couldn't find much to disagree with in the documentary, though he did think that it trivialized and distorted Wolfowitz's vision. "I thought 85 percent of it was legit," he said.

"This was a movie about Bush and his lies," said Curry. "Not about whether this war was justified."

Greenwald doesn't disagree. "I think it's legitimate to debate whether to go to war on the neoconservative argument that we need to go in and fix the Middle East," he says. "It's illegitimate nonsense to talk about weapons of mass destruction and terrorism."

Not that the administration is talking about either anymore. On Sunday, White House chief of staff Andy Card appeared on CNN and declared that questions about prewar intelligence are now "moot" given Saddam's atrocious human rights record.

And what about weapons of mass destruction? "We think there's evidence of some programs that they had," Card said.